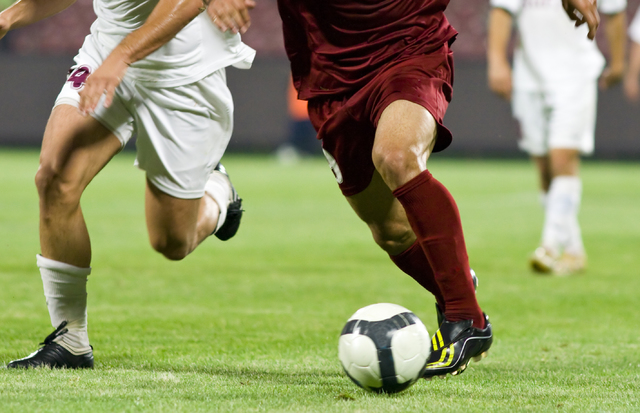 Fernando Valdez also scored, and Miguel Rubio had three assists for Cimarron (9-3-3), which earned its second victory over the Panthers (12-3) this season.

The Spartans, who led 4-0 at halftime, also got assists from Jonathon Ornelas and Kevin Andrade.

Nick Frost scored on an assist from Timothy Stevens for Palo Verde.

Las Vegas 1, Eldorado 0 — At Las Vegas, Isac Nolasco scored on an assist from Agustin Hernandez in the first half as the Wildcats nipped the Sundevils.

Chris Sosa made four saves to get the shutout.

Centennial 1, Faith Lutheran 0 — At Faith Lutheran, Quentin Scott scored an unassisted goal in the first half, and the Bulldogs staved off the Crusaders.

Western 2, Mojave 1 — At Western, Mauricio Muniz scored the go-ahead goal on an assist by Juan Estrada with 15 minutes remaining to rally the Warriors past the Rattlers.

David Ginsburg also scored for Western, which trailed 1-0 at halftime.

Green Valley 1, Tech 1 — At Tech, each team scored a first-half goal before playing to a draw.

Eduardo Gomez scored off an assist by Hunter Kilgore for Tech.

Shadow Ridge 3, Legacy 1 — At Legacy, Jack Guynn finished with two assists to lead the Mustangs by the Longhorns.

Chase Castro, Kody Kildea and Kaden Fernandez each scored a goal for Shadow Ridge, which led 1-0 at halftime.

Matthew Beasley scored on a penalty kick for Legacy.

Silverado 5, Desert Oasis 0 — At Silverado, Jaime Ayala had a goal and two assists as the Skyhawks topped the Diamondbacks.

Liddor Bega also had a goal for Lions, who scored three times in the second half to pull away.

Edgar Sierra had two assists for Desert Pines, and Gregory Mendez had the shutout.

Sunrise Mountain 11, Pahrump Valley 1 — At Pahrump, Musio Jimenez-Vazquez had four goals and an assist, and Jose Arreola had three goals and three assists as the Miners topped the Trojans.

Rancho 5, Valley 1 — At Rancho, the Rams scored three goals in the first half en route to the victory over the Vikings.

Josh Cloyd scored off an assist by Fausto Vega for Valley.