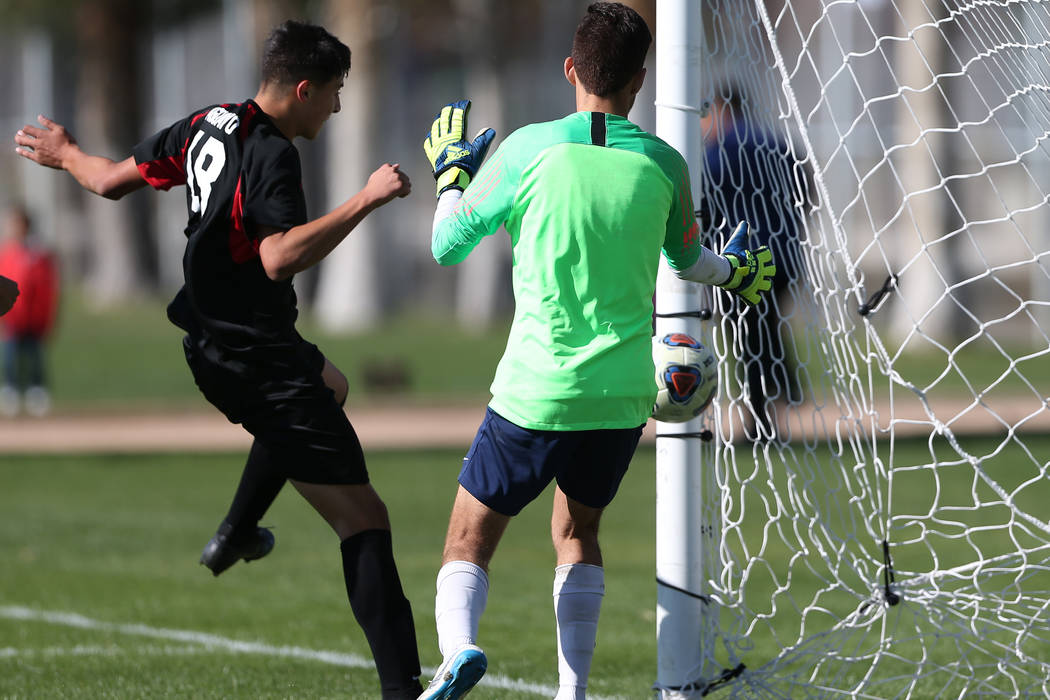 Las Vegas' Sergio Aguayo (18) connects with the ball with his head for a score during the second half against Coronado in the 4A boys state soccer championship game at the Bettye Wilson Soccer Complex in Las Vegas, Saturday, Nov. 10, 2018. Las Vegas won 5-1. Erik Verduzco Las Vegas Review-Journal @Erik_Verduzco

Since Las Vegas lost only one senior from the team that won the Class 4A state championship in boys soccer last year, the path to a repeat championship seemed easy for the Wildcats.

But things didn’t quite work out that way.

Las Vegas found its way back to state, but it will have to take the long way to a title after dropping the Mountain Region championship game to Eldorado.

Las Vegas downed Coronado 3-0 in the first round of the state tournament to make the trip to the final site. The Wildcats meet Spanish Springs in the second round at 6 p.m. Thursday.

While Eldorado and Las Vegas were dueling in the Mountain, Bishop Gorman was on a quiet unbeaten march through its season. The only blemish on the Desert Region champion’s ledger is a 2-2 tie against Arbor View in early September.

Eldorado will face North Region champion Galena in the semifinals at 4 p.m. Friday, with Gorman following against the Las Vegas-Spanish Springs winner at 6. The semifinal winners will meet for the championship at 1 p.m. Saturday. All of the games will be played at Hug High School in Reno.

Let’s take a quick look at the Southern Nevada teams that will be participating in the state tournament this weekend.

Caden Buckley: The senior defender is a stabilizing force on the back end. He also has seven goals and five assists in addition to his defensive work.

Family environment: Several of the seniors have been playing together for as long as 12 years, and that chemistry has helped the Gaels overcome the lack of a true superstar.

“We’ve got a great group of seniors. I’m really excited for this weekend coming up. I think there’s a great opportunity, but there are a lot of really good teams (at state).” — Bishop Gorman coach Tommy Tate.

Roberto Soto: The senior midfielder is second on the team with 18 goals. But he is far and away its top playmaker with 19 assists for a total of 55 points.

Resiliency: The Sundevils dropped a pair of games late in the season that pushed them out of the running for the Mountain Region’s regular-season title, but they fought through a flu bug that hit several of their players to win last week’s regional tournament.

“We had five guys that were sick yesterday, so we’re doing everything we can to get healthy. We also have to stay focused. When you win, everyone is telling you how good you are. But there’s still work to be done.” — Eldorado coach David Ostler.

Sergio Aguayo: The junior forward is third in the valley with 27 goals, and he also has 20 assists for a total of 74 points. Aguayo had three goals in last year’s state championship game, a 5-1 win for the Wildcats over Coronado.

“We can’t worry about winning the state championship right now. We have to focus on winning the game (Thursday) first.” — Las Vegas coach Rafael Mitjans