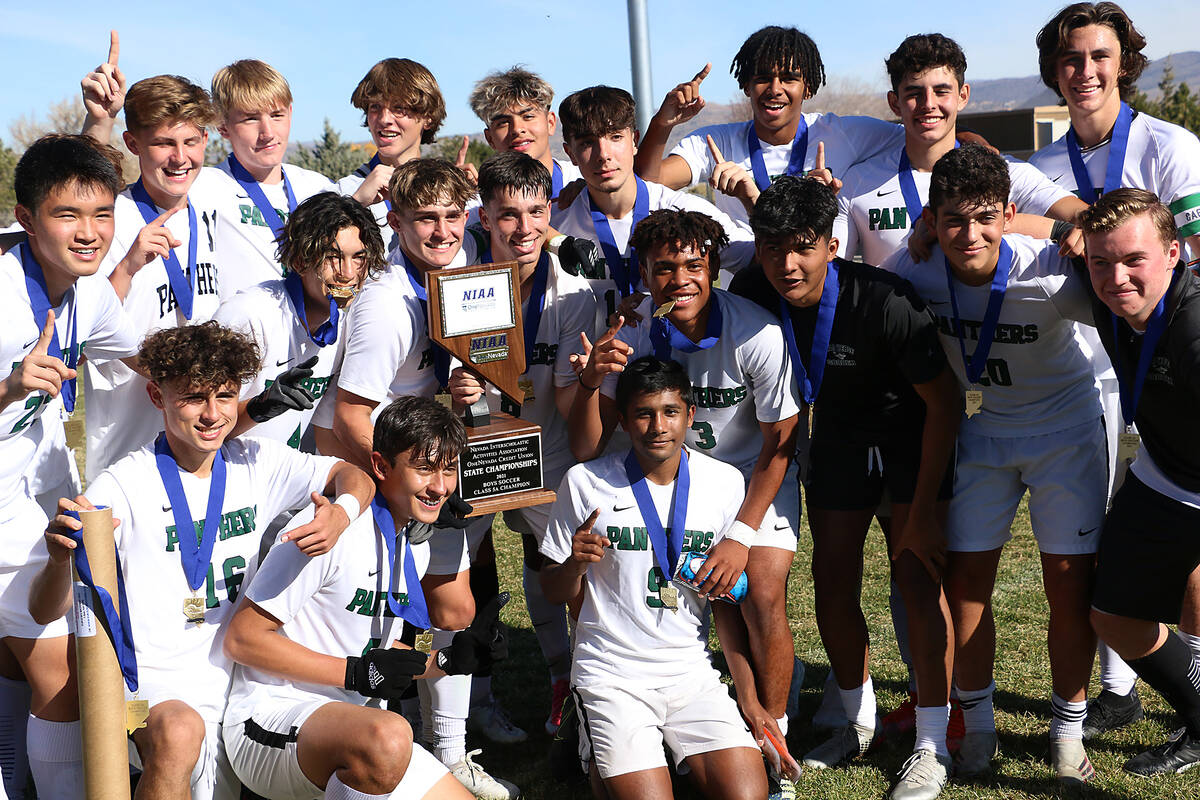 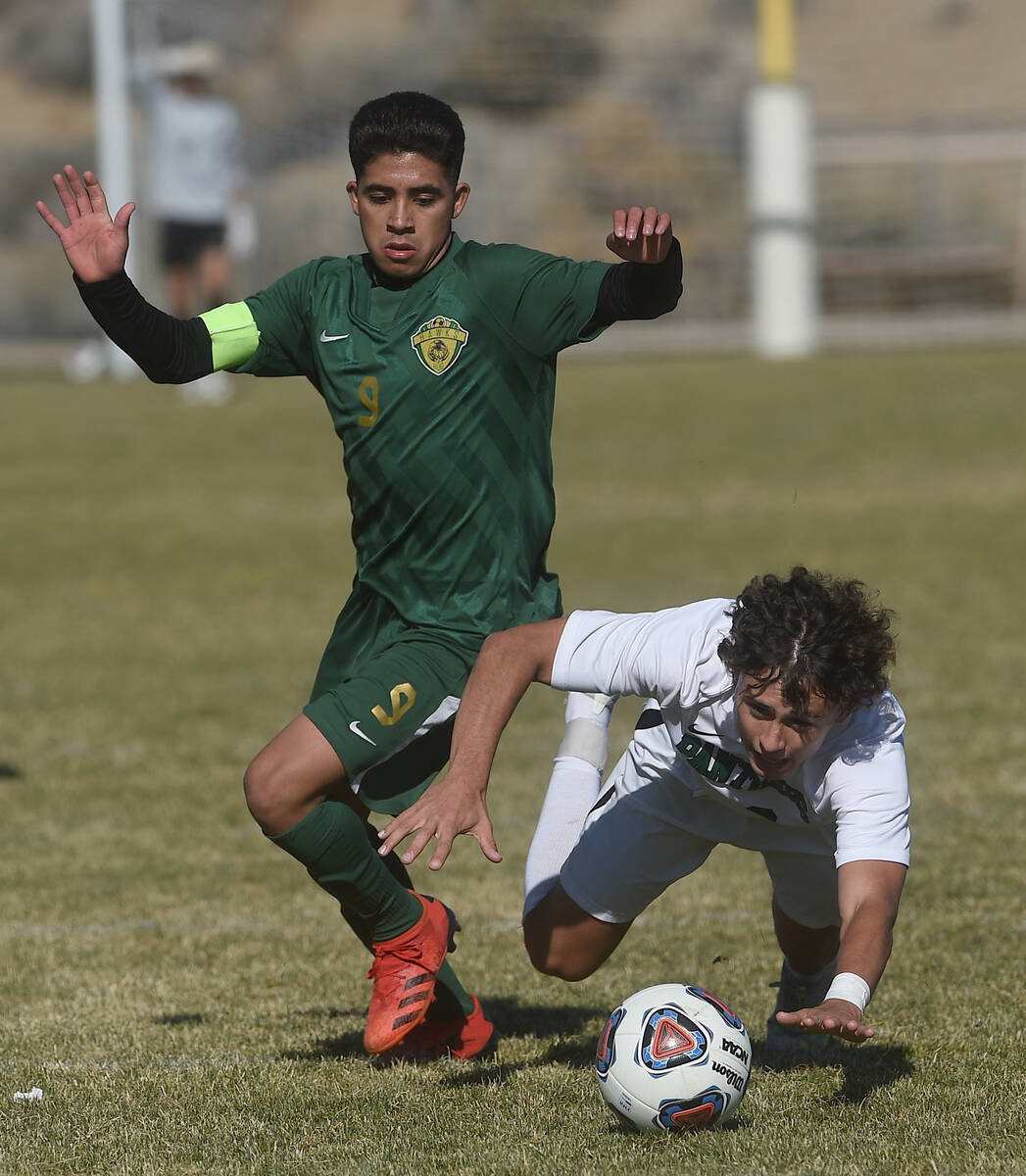 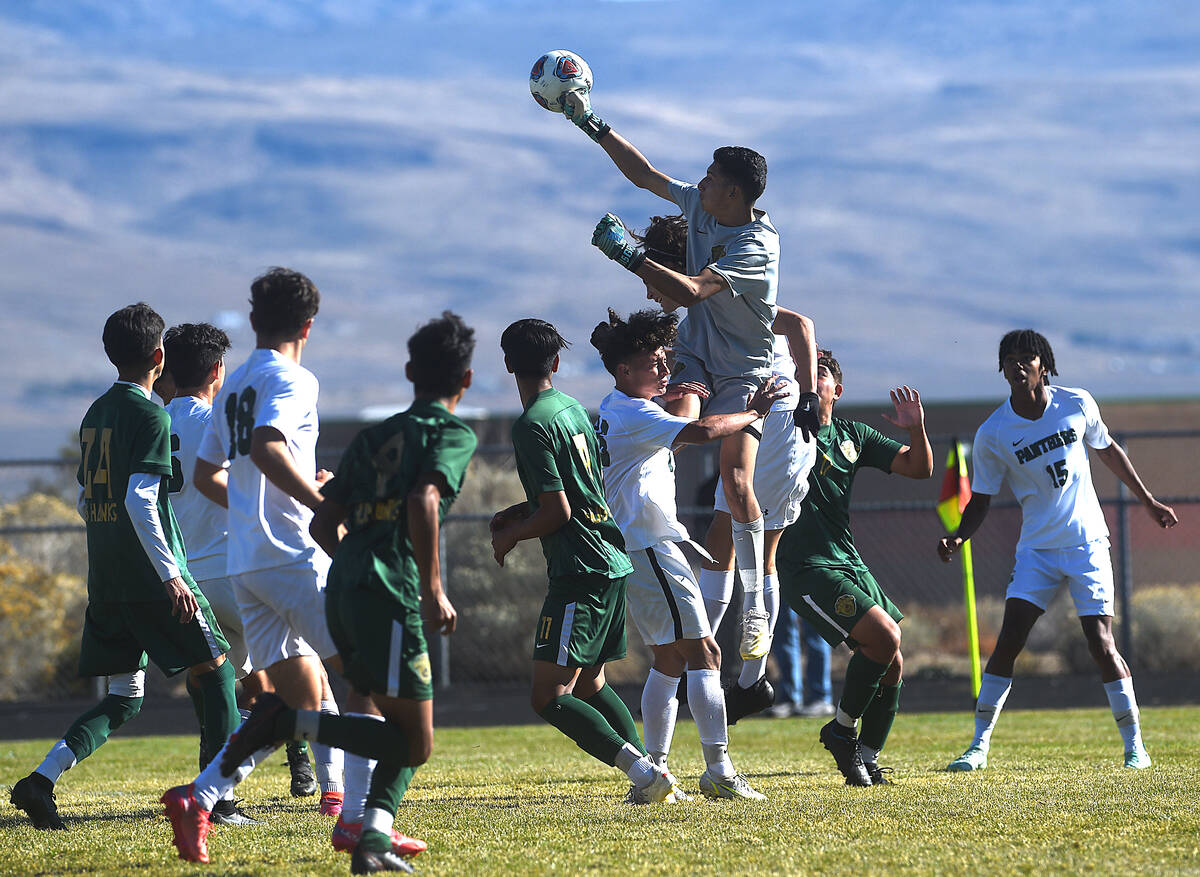 Hug's Issael Moctezuma makes a save while taking on Palo Verde during the NIAA boy's soccer championship in Reno on Saturday, Nov. 13, 2021. (Jason Bean/Reno Gazette Journal) 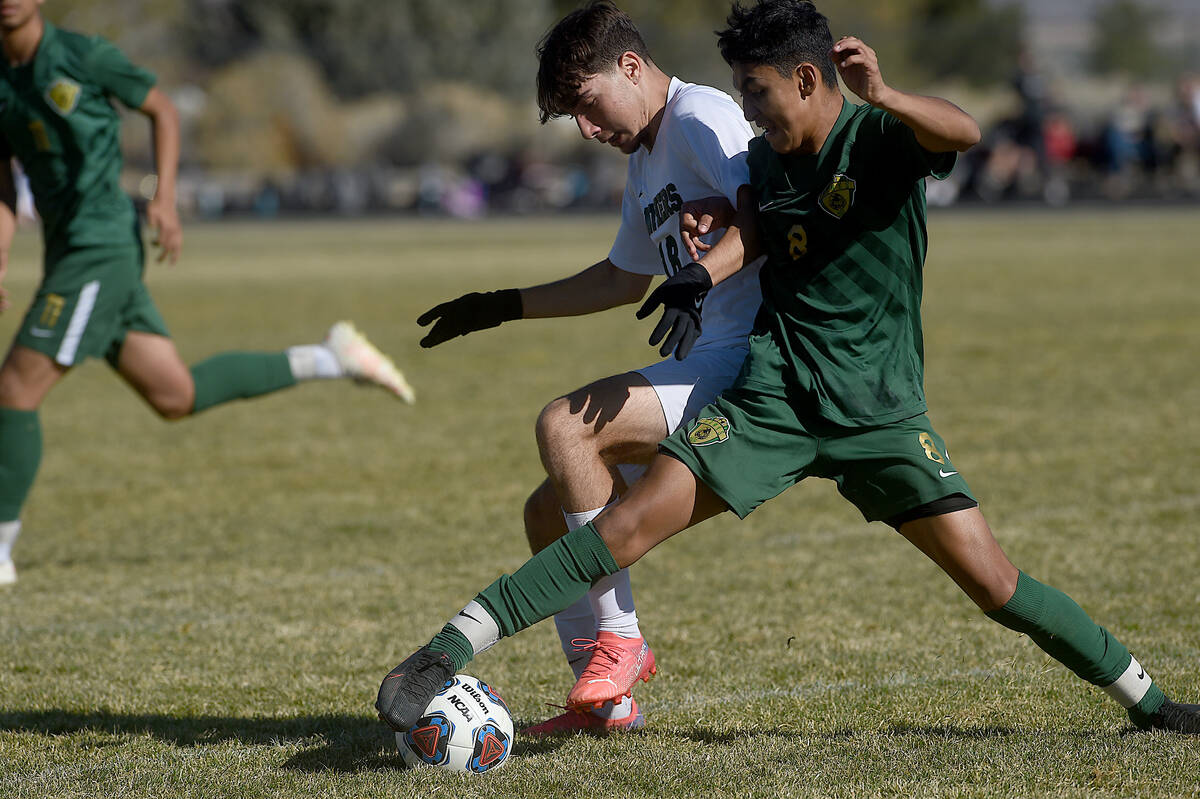 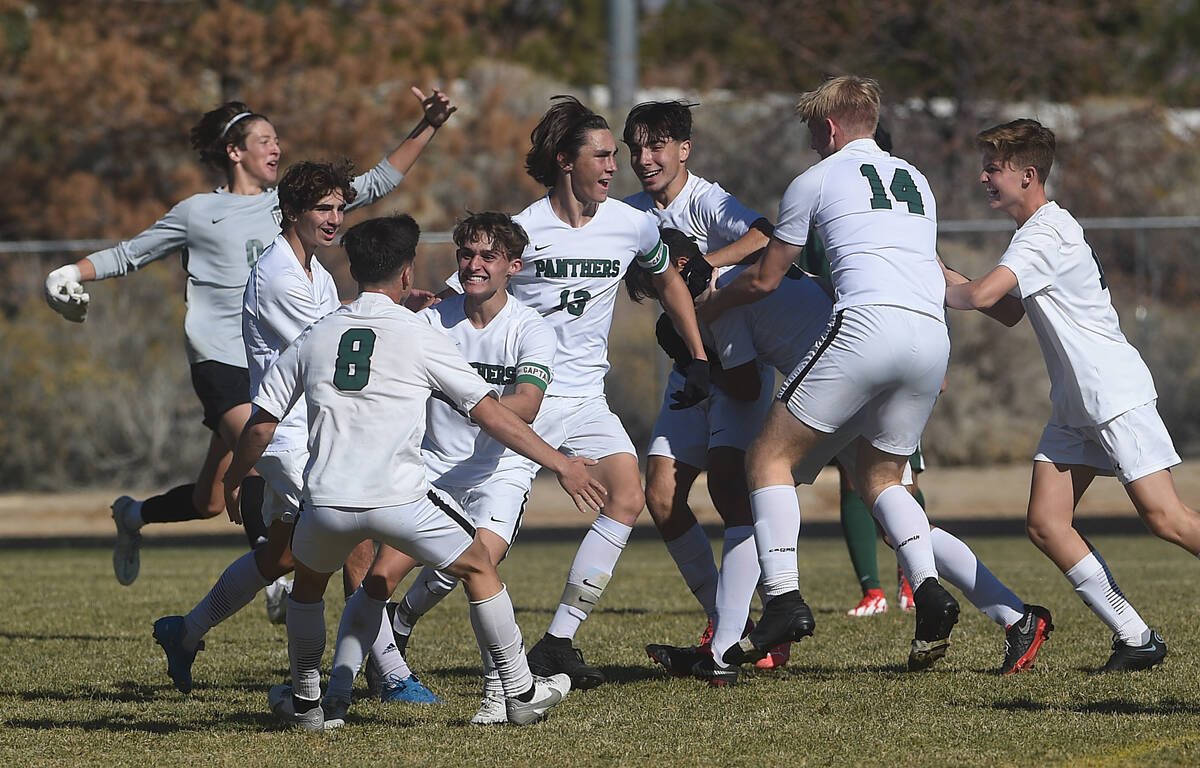 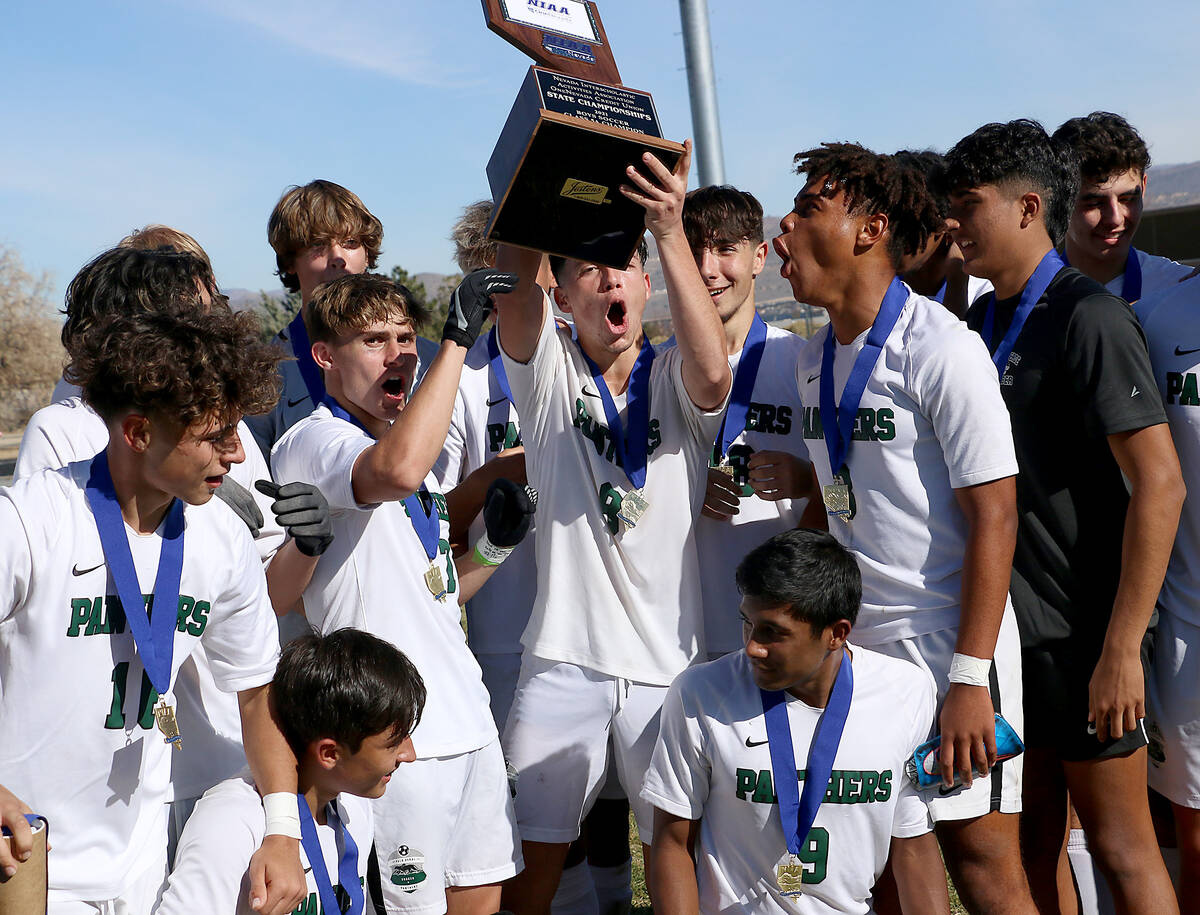 He was sure of it 10 minutes into the game.

“We set some goals early in the year, and this was obviously the ultimate goal,” Palo Verde coach Scott Hunt said.

Added Vogel: “This means a lot to me because I had a brother who played four years on varsity and didn’t get a championship.”

On the first goal, Vogel saw sophomore Yuval Cohen slip between two defenders as he worked along the goal line to the left of the net. He found an open spot 6 yards in front of the goal, Cohen put the pass directly on Vogel’s right foot, and he one-timed it past goalie Issael Moctezuma.

“We came out thinking that we were going to win, but once we scored that first goal, there’s no way they’re going to come back and beat us,” Vogel said.

Cohen made it 2-0 six minutes later on a penalty kick after Marcus Ragin drew a foul in the box.

“Obviously Marcus has great speed, and they had to collapse on him,” Hunt said. “It was either foul him or he was going to do it by himself.”

After that, the Panthers kept the ball away from goalkeeper Nicholas Webster with a strong and midfield effort that prevented any Hug forays toward the net. The Panthers’ third goal came on an own goal by the Hawks, when Moctezuma deflected a shot, but it bounced off Hug’s Juan Figueroa.

“We talked about it last night in our team meeting before everybody went to bed, the idea was if we can keep possession, then we know we can control the game,” Hunt said. “I just think with a team like that, that has some guys that are very good on the ball, the more we can keep the ball, obviously it will work into our favor.”

Sunrise Mountain 3, Green Valley 2 — At Foothill, Luis Rosales scored two goals, including the state championship winner in overtime, as the top-seeded Miners edged the No. 2 Gators.

It’s the second championship for Sunrise Mountain (16-0-3), which won the 3A crown in 2017. Mario Juarez scored a goal, and Luis Pelcastre and Kristian Botello had assists for the Miners.