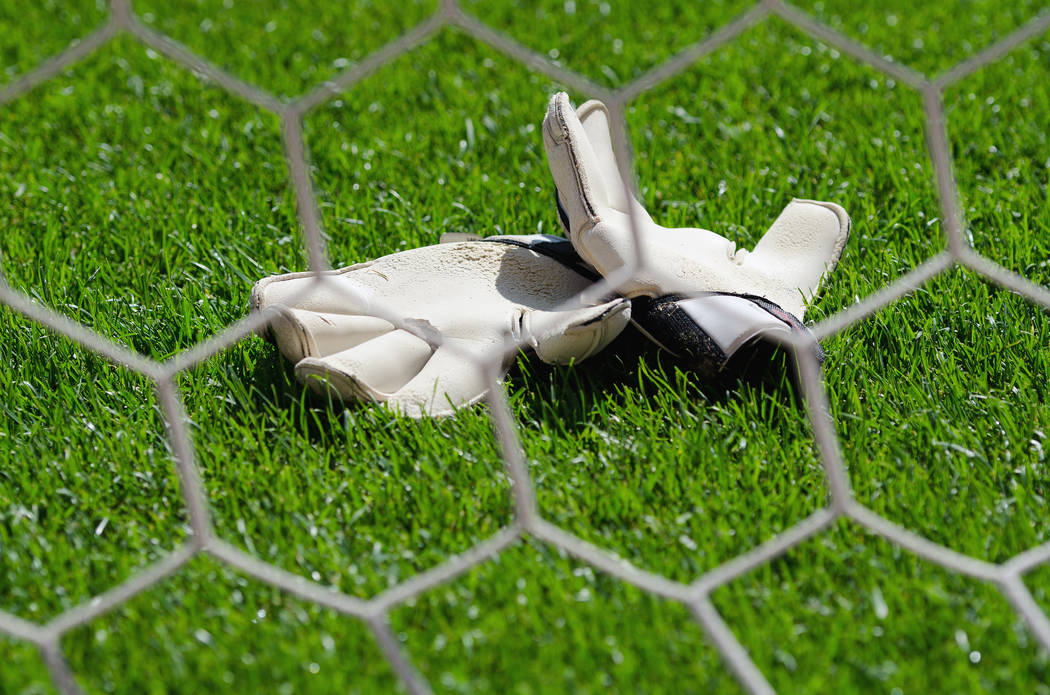 Pahrump Valley goalkeeper Hannah McElheny had never played in goal before this season, but the junior has already made her mark on the Trojans soccer program.

McElheny recorded 14 saves — most of them in the second half — to lead the Trojans past Moapa Valley 1-0 in the quarterfinals of the Class 3A Southern Region tournament at Bettye Wilson Soccer Complex on Wednesday.

The Trojans (14-4-1) face Sunrise Mountain (10-5) at 6 p.m. Thursday in a rematch of last season’s region title game. The Miners won that game, 2-1. The winner of that game will play for the Southern Region title and qualify for the state 3A playoffs.

“She actually came in just learning as a keeper this year,” Pahrump coach Julie Carrington said. “She’s our first-year keeper. She plays basketball, and I always said if I can get a girl who plays basketball — they have great depth perception — and she does and she’s just picked it up.

“She’s got that natural ability to look and see where that ball’s going to be and will go for it, sometimes a little much for me. You know, that makes me a little nervous, but she works hard 110 percent, every single time.”

McElheny, who had six shutouts in the regular season, credited her teammates for helping maintain the shutout in her first playoff game as a goalkeeper.

“I love (playing goalkeeper) actually,” she said. “I never saw myself as a goalie but once they put me in there, I’m starting to gain more confidence so I really love it.”

The Trojans were aggressive on the offensive end. Pahrump was able to capitalize on the pressure when Halie Souza scored off an assist from Kimberly Ramos at the 25-minute mark of the game.

While the Trojans had chances to add to their lead, they couldn’t get another shot past Moapa Valley goalkeeper Kyra Larsen.

In the second half, the Pirates (8-8-1) took control offensively. McElheny made three saves in the first five minutes of the second half to maintain the Trojans 1-0 lead. The Pirates also had more chances later in the game, but they missed wide on an open net and missed a cross in front of the net.

“They had older substitutes than we had, and we had a lot injuries this year so we didn’t have as (many players on the) roster as we normally would have,” Carrington said. “They have faster athletes than we have, and we weren’t able to sub as much as we probably could have. But they’re good.”

Sunrise Mountain 7, Del Sol 0 — Alexandra Trinidad had four goals and an assist as the Miners routed the Dragons in another quarterfinal.

Fatima Carrillo-Cornejo had a goal and an assist, and Stephanie Plazola and Itata Urena each scored once for the Miners, who led 4-0 at halftime.

Goalkeepers Marlene Nevarez and Melody Stevens combined for the shutout.

Geraldi Gomez added a goal and an assist for Western (13-4), which led 2-0 at halftime.

Devany Marroquin and Caro Acosta each had assists for the Warriors, who will play Virgin Valley (11-6-1) at 6 p.m. Thursday in a semifinal.

Jaymie Hulet and Raeanna Slack each had an assist for the Bulldogs, who scored twice in the second half to take control of the game.