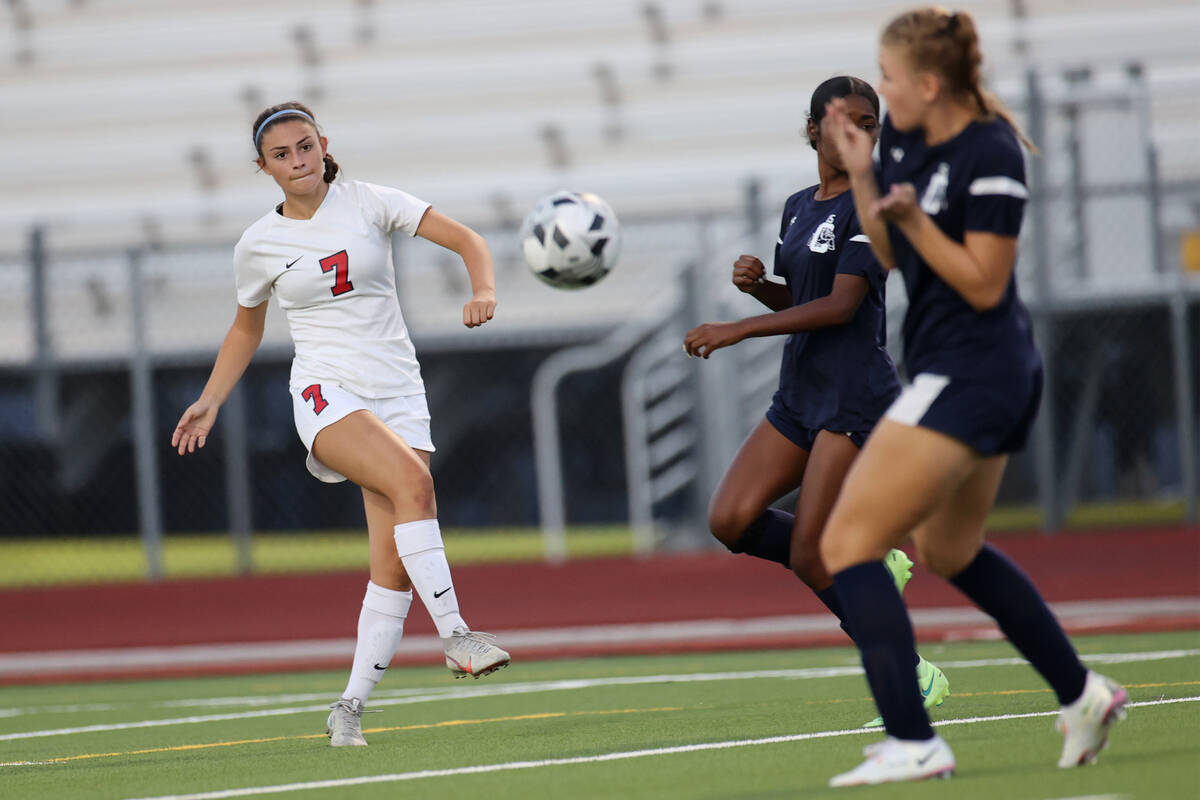 Coronado's Alexis Pashales (7) shoots the ball for a score during the second half of a girl's soccer game against Centennial at Centennial High School in Las Vegas, Wednesday, Sept. 22, 2021. (Erik Verduzco / Las Vegas Review-Journal) @Erik_Verduzco 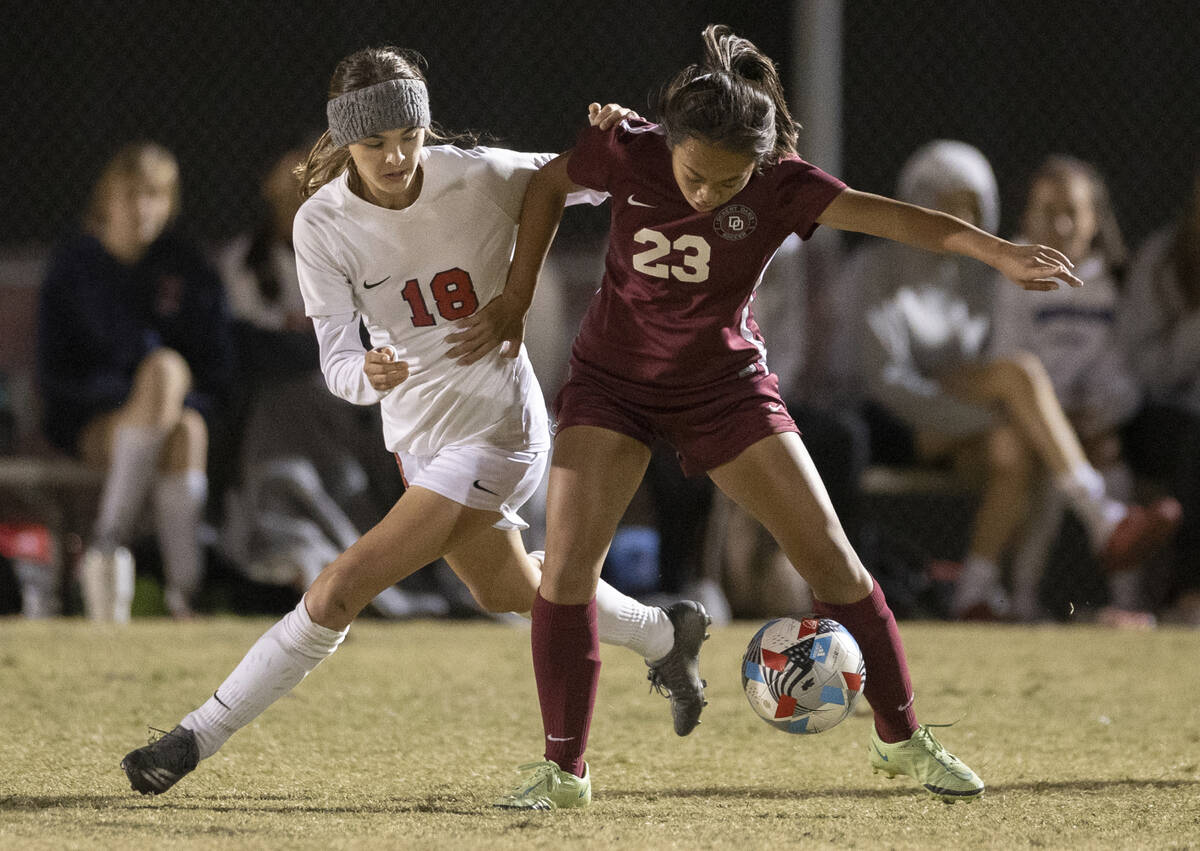 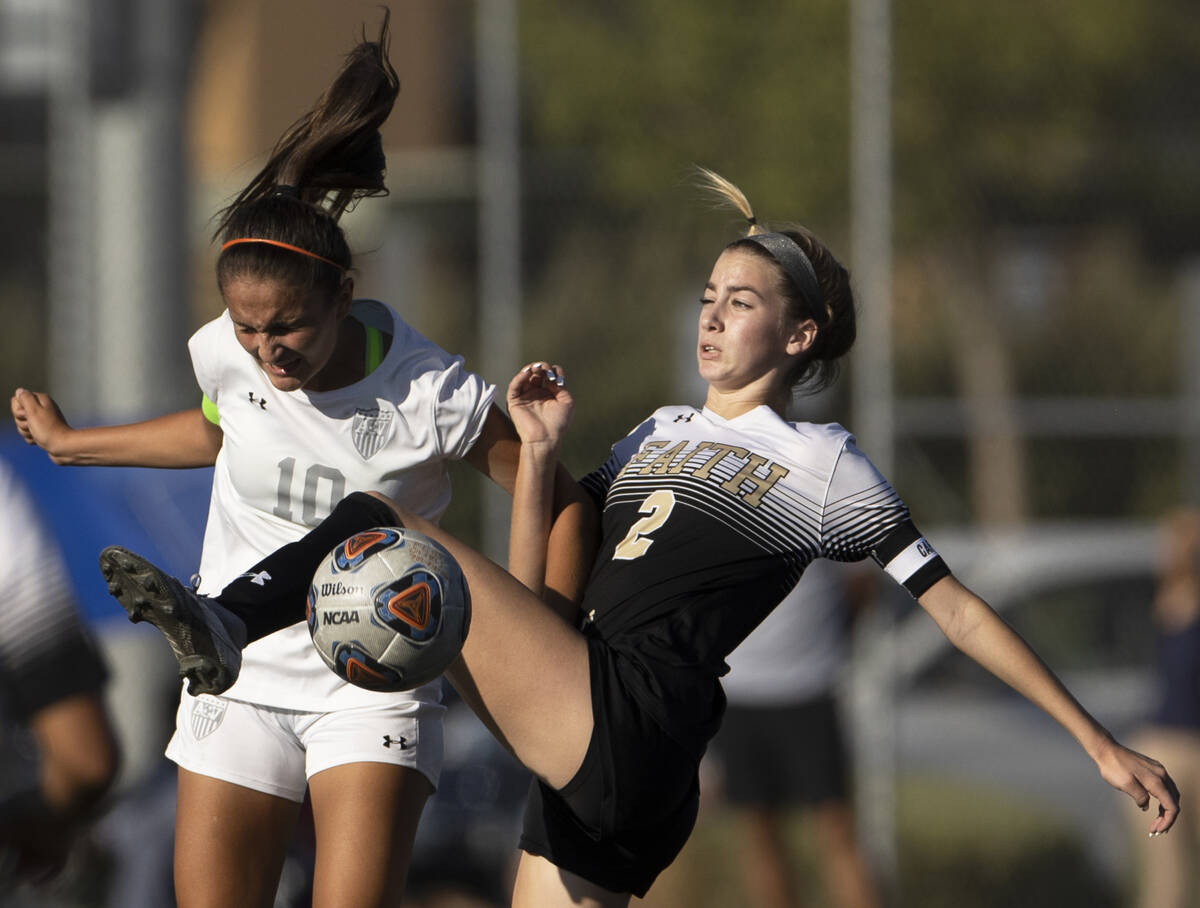 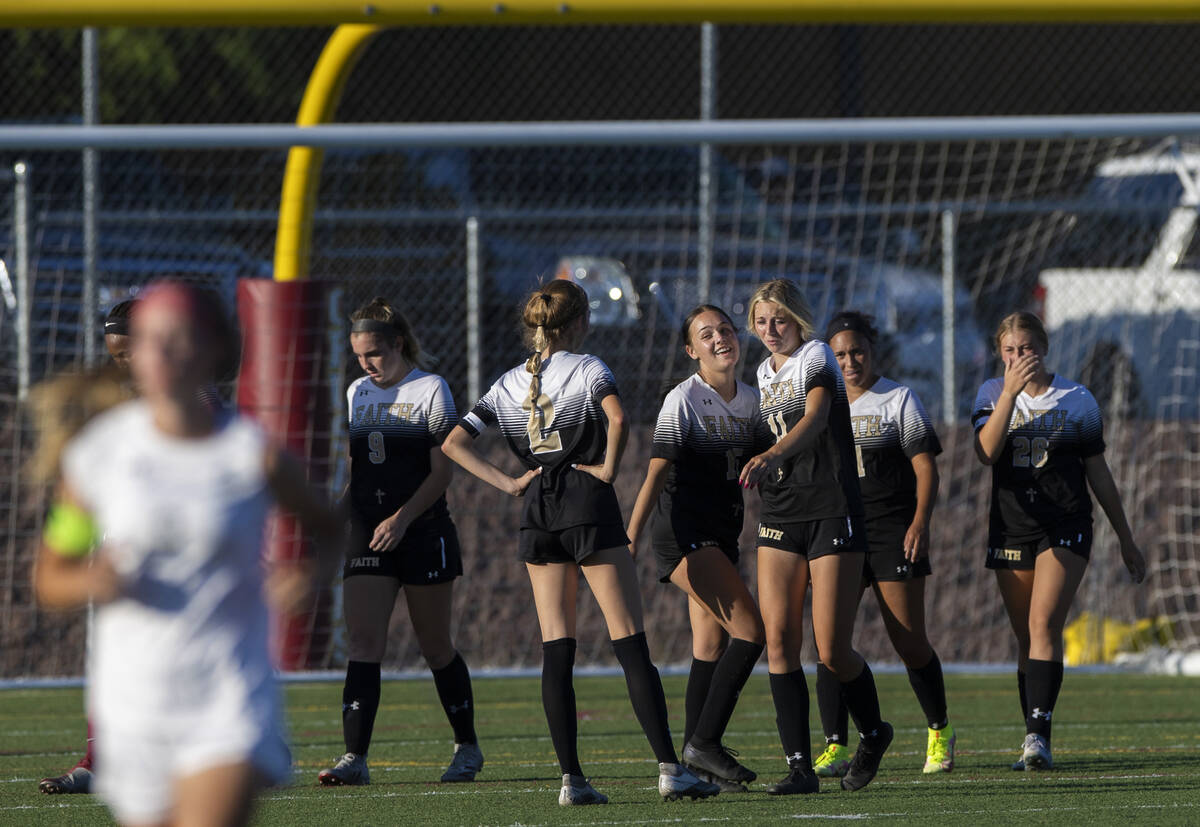 Coronado made a run to the girls state soccer championship game two years ago before a 1-0 loss to Faith Lutheran denied its ultimate dream.

Both teams are back at the state tournament, the first for the new Class 5A, but it feels different for Coronado this time.

“They’re experienced this time, and their mentality is different,” Coronado coach Dana Neel said. “They’ve tasted it before and were so close to getting (a title), so they’re ready.”

Coronado will meet Galena at 2 p.m. Friday, followed by Faith Lutheran-McQueen at 4. The semifinal winners will meet at noon Saturday for the championship. All games will be played at Spanish Springs High School in Sparks.

Coronado had two chances in the regular season to assert its superiority over Faith Lutheran, but both games finished 1-1.

In Saturday’s Southern Region championship game, the Cougars finally broke through. Alexis Pashales and Trinity Buchanan scored in a 2-0 win over the Crusaders that allowed them to clear a huge mental hurdle.

“It felt really nice,” said Pashales, who could have had two more goals if not for spectacular leaping saves from Faith Lutheran goalkeeper Ari Gaminara. “It felt like a state championship in a sense.”

It’s been a relatively smooth ride for the Cougars (18-1-3). They lost to Arbor View 1-0 in the regular season, but avenged the defeat with a 4-1 win in the Southern Region semifinals.

That’s a testament to the mindset Coronado’s experienced players had in developing chemistry with the newcomers. Senior Chrysta Vasquez said she knew after the first weekend of the season that the Cougars had a chance to be special.

“We played Faith and (Bishop) Gorman in the beginning of the season, and it showed us what type of team we were,” Vasquez said. “We were already a threat to them, and that gave us a lot of confidence.”

Faith Lutheran (16-2-4) had a bumpier path to state, losing two key players along the way. There was what coach Bob Chinn called an “internal matter” that led to goalkeeper Jordan Brown, the 2019 Gatorade Nevada Player of the Year, leaving the team.

The Crusaders then lost sophomore midfielder Andrea Leyva, whom Chinn called the best player in the state, to a torn ACL.

“This team has so much grit,” Chinn said. “There were times when we played with six of our starters out there, and we still battled. I like to call them lion chasers. They’re not afraid, and the girls have given everything they’ve got.”

Chinn said part of the challenge this week is playing in Northern Nevada. Along with colder weather and playing at a higher elevation, the field is different from what the Crusaders are used to in that it is smaller and won’t allow them to play as wide as they would like.

Faith Lutheran faces a physical team in McQueen, and Chinn said the northern referees don’t call the game as tightly as they do in the south.

Unlike two years ago, when the Crusaders made the trip up north as favorites and won the title, they know they’re underdogs after the loss to Coronado.

“Sometimes being the underdog is a nice way to go into a tournament,” Chinn said. “Congrats to Coronado. They’re definitely a strong team, and we hope we earn the right to play them again and see if we can’t give them a game.”