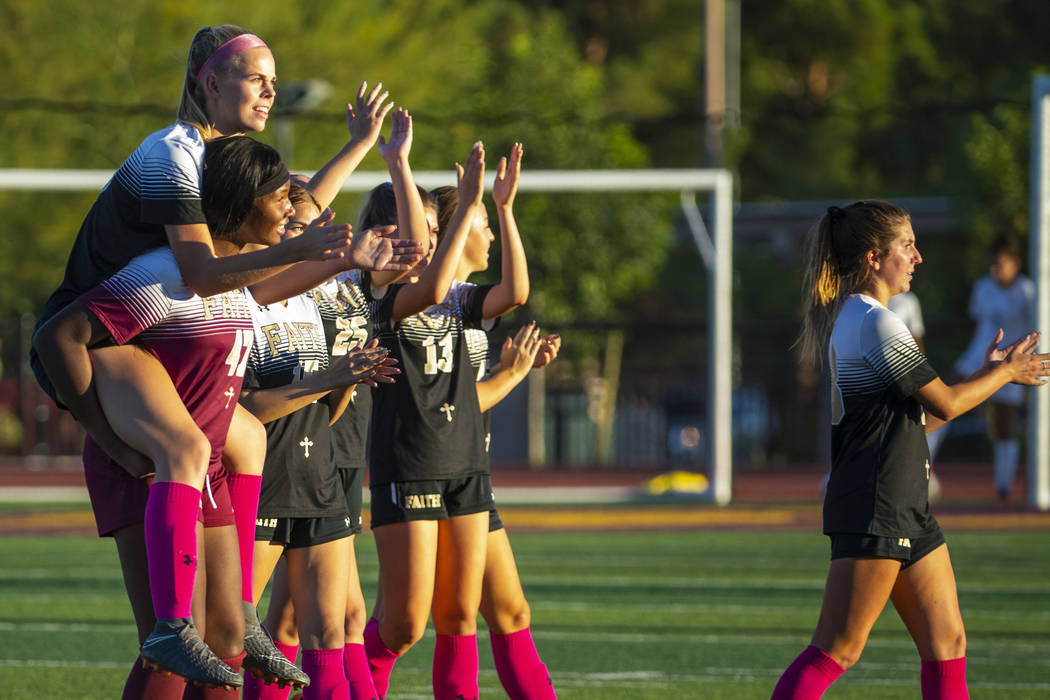 One goal apiece was all it took for two Southern Nevada Class 4A soccer teams to cap unbeaten seasons with state championships.

Faith Lutheran scored a first-half goal to edge Coronado 1-0 for its first 4A girls soccer title, and the Bishop Gorman boys found their opening for a goal late in the second half of a 1-0 win over Eldorado on Saturday at Hug High School in Reno.

Faith Lutheran (23-0-1) hit the post early and couldn’t find the goal until Amelia McManus took a pass from Riley Divich and scored.

“It was a total team effort,” Faith Lutheran coach Bob Chinn said. “We were able to keep fresh legs in, keep them going and keep the pressure on them. It’s a nice way to put a bow on the season.”

Jordan Brown had eight saves in recording her 18th shutout of the season. The Crusaders, who were ranked as high as No. 3 in the USA Today Super 25 national rankings and No. 8 in the latest poll, outscored their opponents 112-3 this season.

The only time they didn’t come out victorious was a scoreless tie against Centennial in Mountain League play Oct. 15.

Chinn called Saturday’s win “an even match” and gave credit to the Cougars for pushing his team.

“Both teams played very well. We hit the post early (before the goal), but they had some chances, too,” Chinn said. “We have nothing but respect for Coronado. It was a fun game to watch.”

Truckee 2, South Tahoe 0 — At Wooster High School, the Wolverines shut out the Vikings to claim their fourth straight Class 3A title.

Bishop Gorman 1, Eldorado 0 — In a game that was largely played in the midfield, Cole Malm scored in the 80th minute to give the Gaels their sixth state title and first since 2002.

“I’ve coached a lot of these guys in club, so I know their capability,” Gorman coach Tommy Tate said. “To go 25-0-1 in a very tough high school league with teams like Coronado and Green Valley, among others, I didn’t think we could go undefeated, but I did think we could win the state championship.”

Tate said the field was bumpy and narrow, and that made it difficult for either team to sustain any kind of offensive attack.

As a result, the game stayed scoreless until the final minute. That’s when Caden Buckley won possession in the midfield. He got the ball to Malm, who beat the right back and scored “on a tough angle” to clinch the title.

Gorman, ranked 12th in the USA Today Super 25 national rankings, tied Arbor View on Sept. 5 for its only blemish, and it had played only one other one-goal contest since that game.

“This is a great group of guys, and I think their togetherness is what helped them win this championship,” Tate said.

Western 2, Sparks 1 — At Wooster High School, the Warriors scored with about 15 minutes left to break a 1-1 tie and claim their second straight Class 3A state title.

The Railroaders, who suffered their first loss, scored with 17 minutes left in the first half to take the lead, but the Warriors (22-1-1) equalized before halftime.