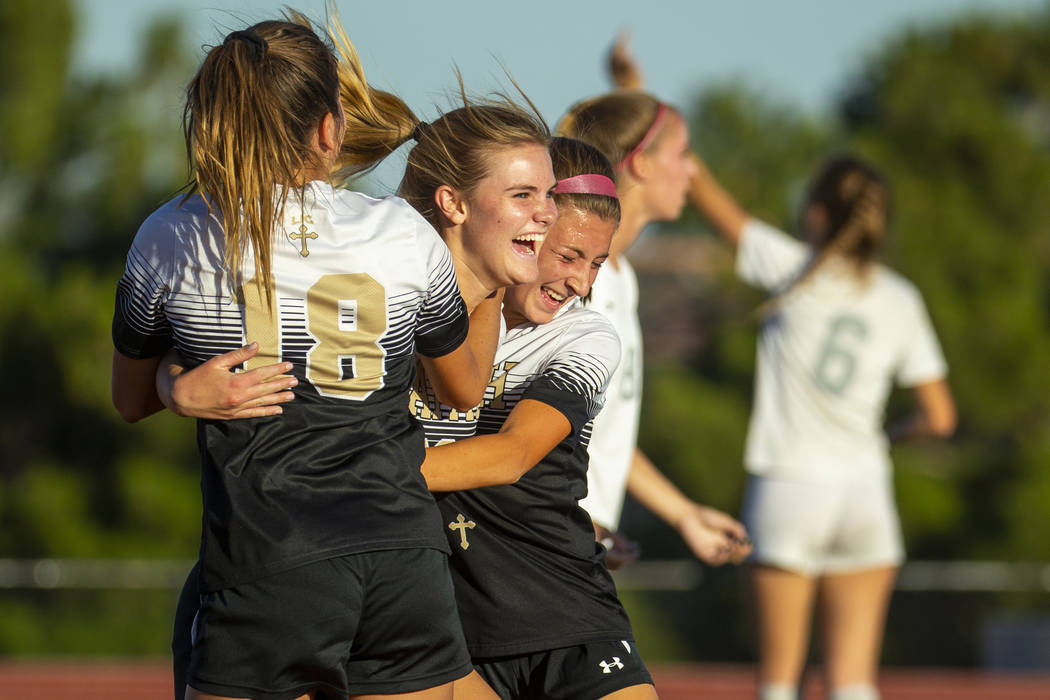 Fresh off its 2-0 win over a strong Arbor View squad, the Faith Lutheran girls leapt two spots to No. 3 in the USA Today Super 25 soccer poll.

The Crusaders moved to 14-0 with the win and have allowed only two goals the entire season – in a 4-1 win over Bishop Manogue in the season opener and in a 9-1 victory over Canyon Springs on Sept. 18.

Goalkeeper Jordan Brown has 10 shutouts, tops in the valley, and Amelia McManus has a team-high 17 goals.

The Las Vegas boys, the defending 4A state champion ranked No. 14 in this week’s USA Today Super 25, were upended 1-0 by Eldorado. Roberto Soto scored the game’s only goal, which was assisted by Leobardo Badillo. Emiliano Garcia kept a clean sheet by stopping 13 Wildcat shots.

According to the NIAA’s record book, no 4A player has scored more goals in a game than Desert Oasis’ Jacey Woods did Monday.

“We were mainly focusing on the school record, which was four,” Desert Oasis coach Jared Ogden said. “After she got her fifth, I subbed her out and congratulated her. I put her back in late, and she got her sixth. It wasn’t until later I remembered reading the article from last year (about Brooks) and the record being six. It was one of those nights where every move, every shot was working.”

Wood is tied for fourth in the valley with 20 goals for the Diamondbacks, who are tied with Bishop Gorman for second in the Desert League with 19 points. Both teams are 6-1-1 and trail Green Valley (7-0-1, 22 points).

Athletes of the Week Football

Kyle Holmes, Arbor View: The quarterback was 13-for-15 passing for a school-record 308 yards and four touchdowns in a victory over Bonanza.

Alexis Hale, Coronado: The defender scored three goals in the Cougars’ win over Durango, and also “truly had a breakout week as a defender,” coach Dana Neel said.

Lincoln Aquino, Coronado: The forward had two goals and an assist in the Cougars’ 2-0 week.

Aspen Steele, Durango: The outside hitter had 12 kills, 12 digs and three blocks in the Trailblazers’ five-set win over Liberty.

Athletes of the week is based on nominations received from coaches. Nominations are due at 9 a.m. Monday and should include an athlete’s name, school, classification, position and statistics for the week. A poll can be found each Monday at reviewjournal.com/nevadapreps. Voting ends at noon Wednesdays.