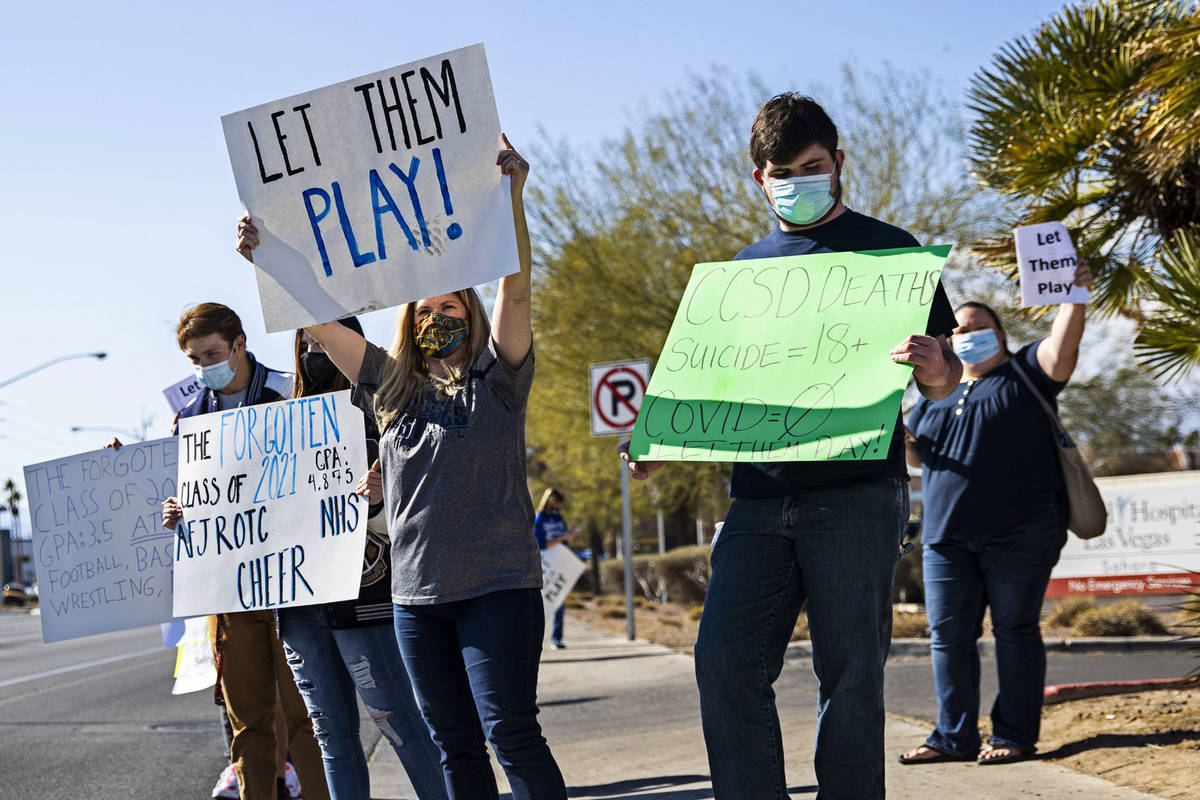 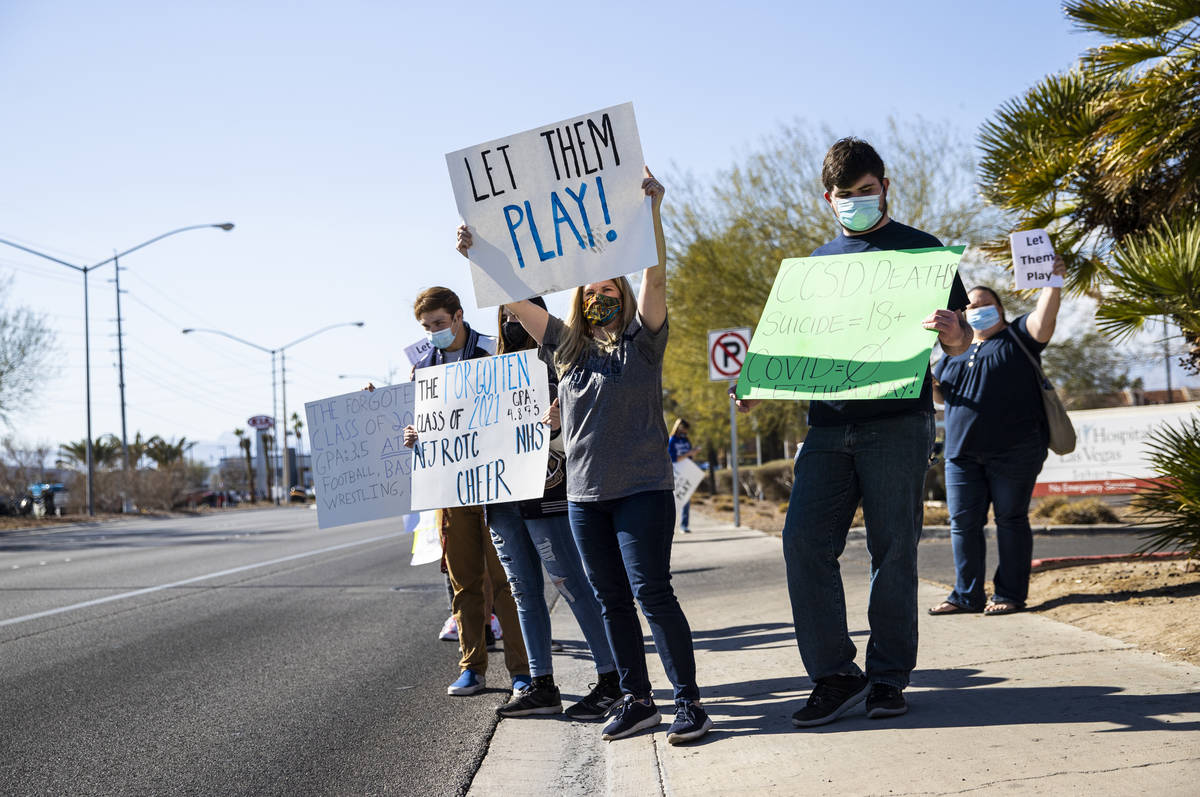 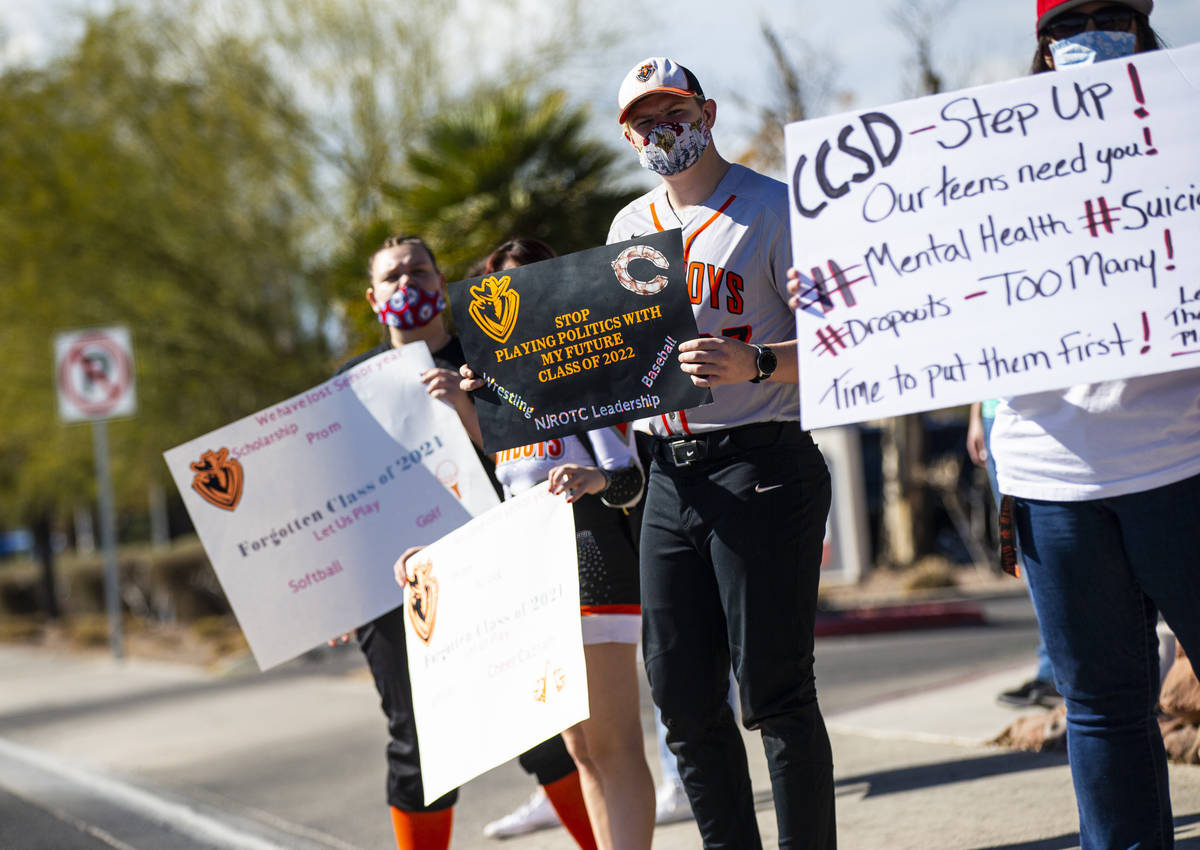 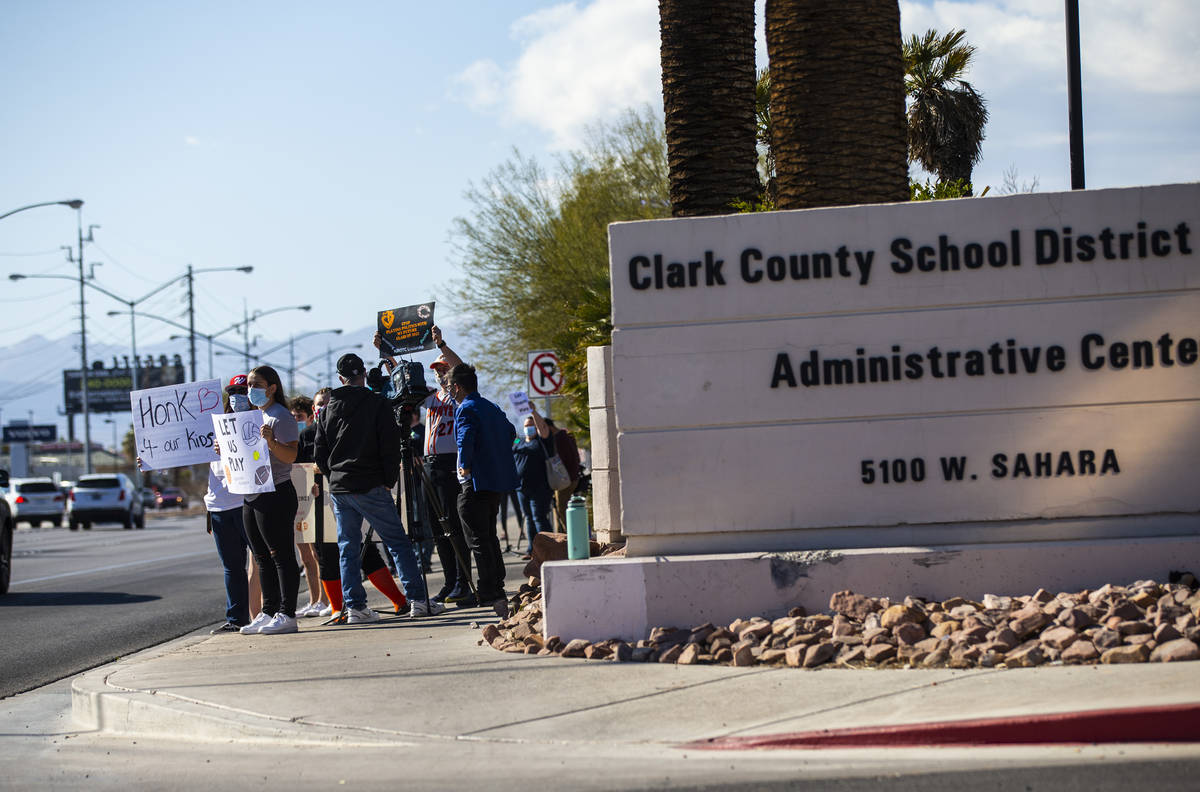 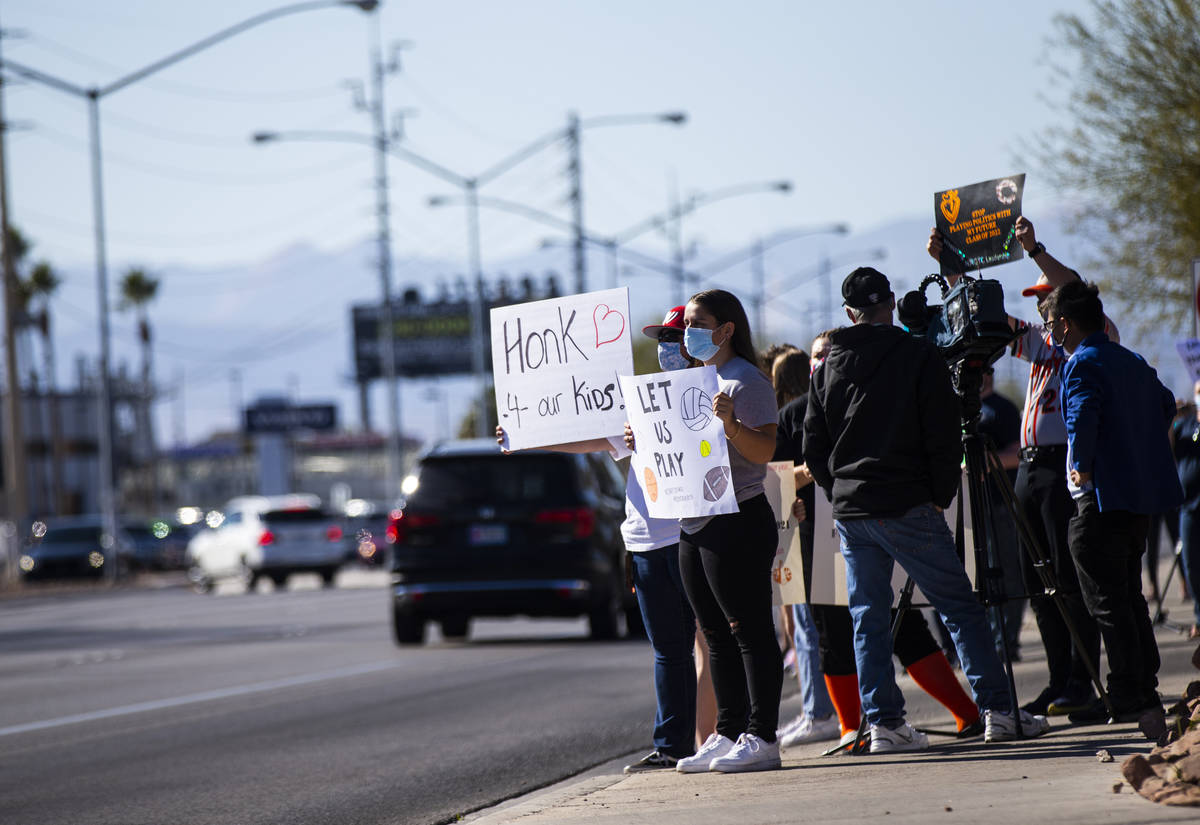 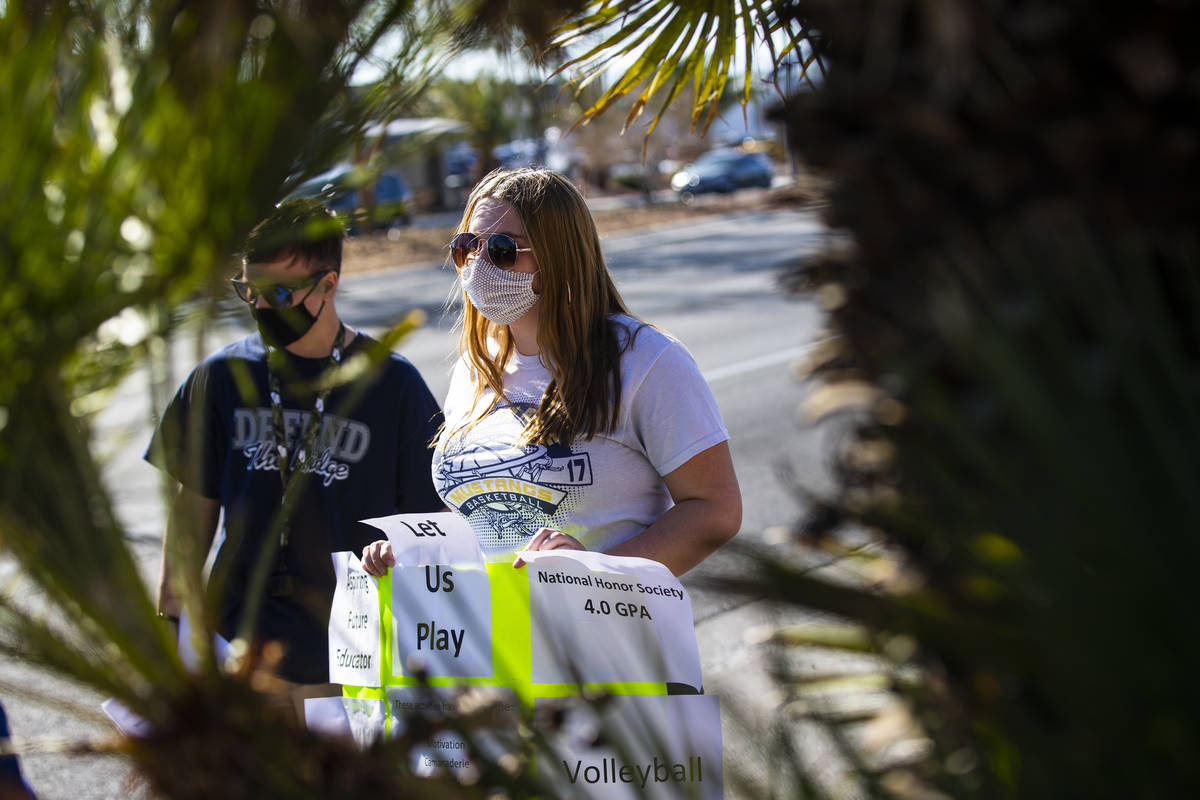 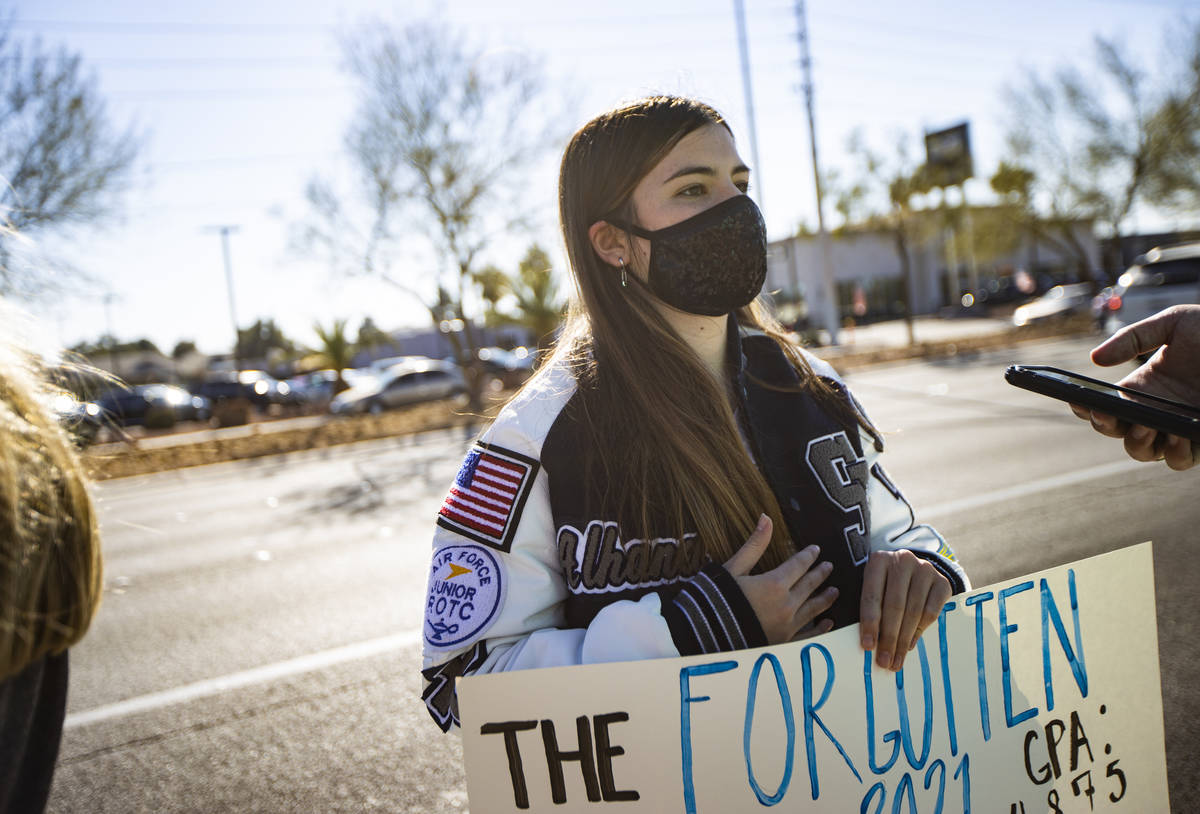 Shadow Ridge High School student athlete Alhana Bellotte talks about why she is participating in a rally to urge school district officials to bring back sports outside of the Clark County School District administration building in Las Vegas on Wednesday, Feb. 10, 2021. (Chase Stevens/Las Vegas Review-Journal) @csstevensphoto 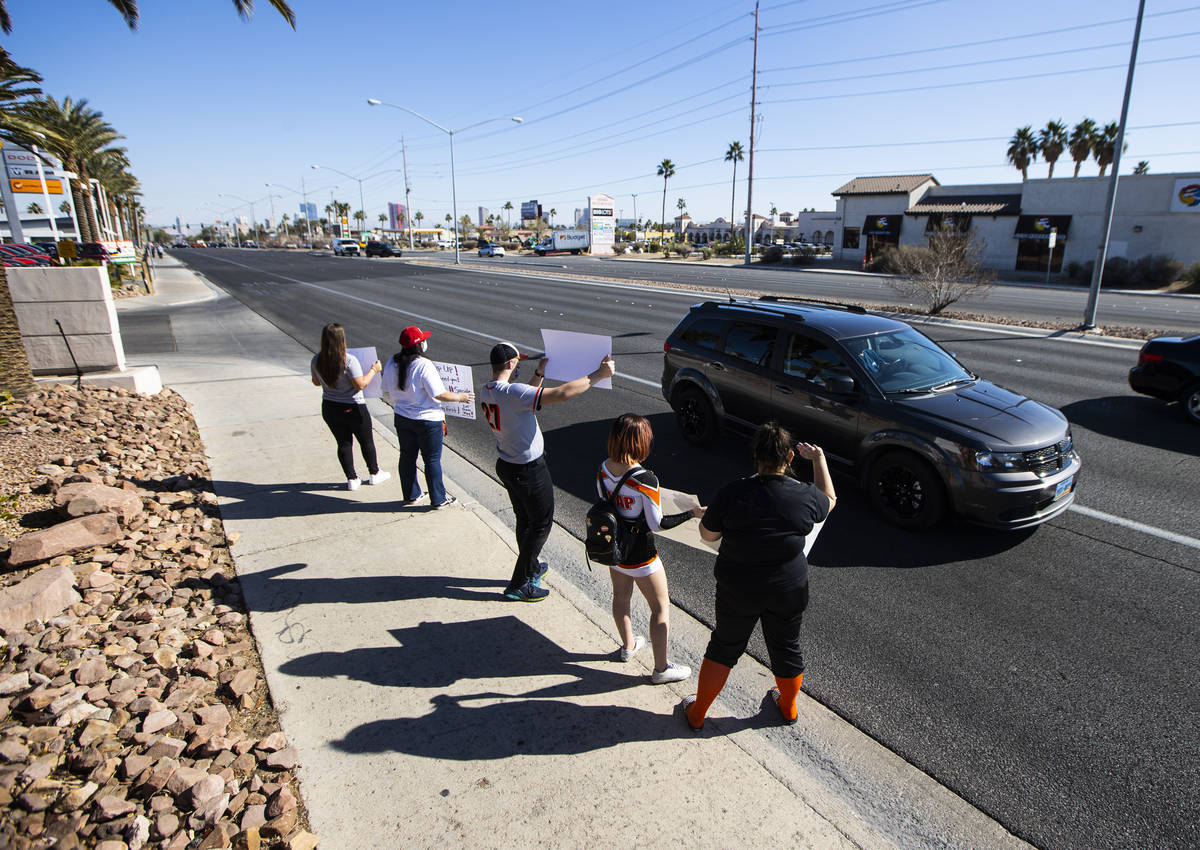 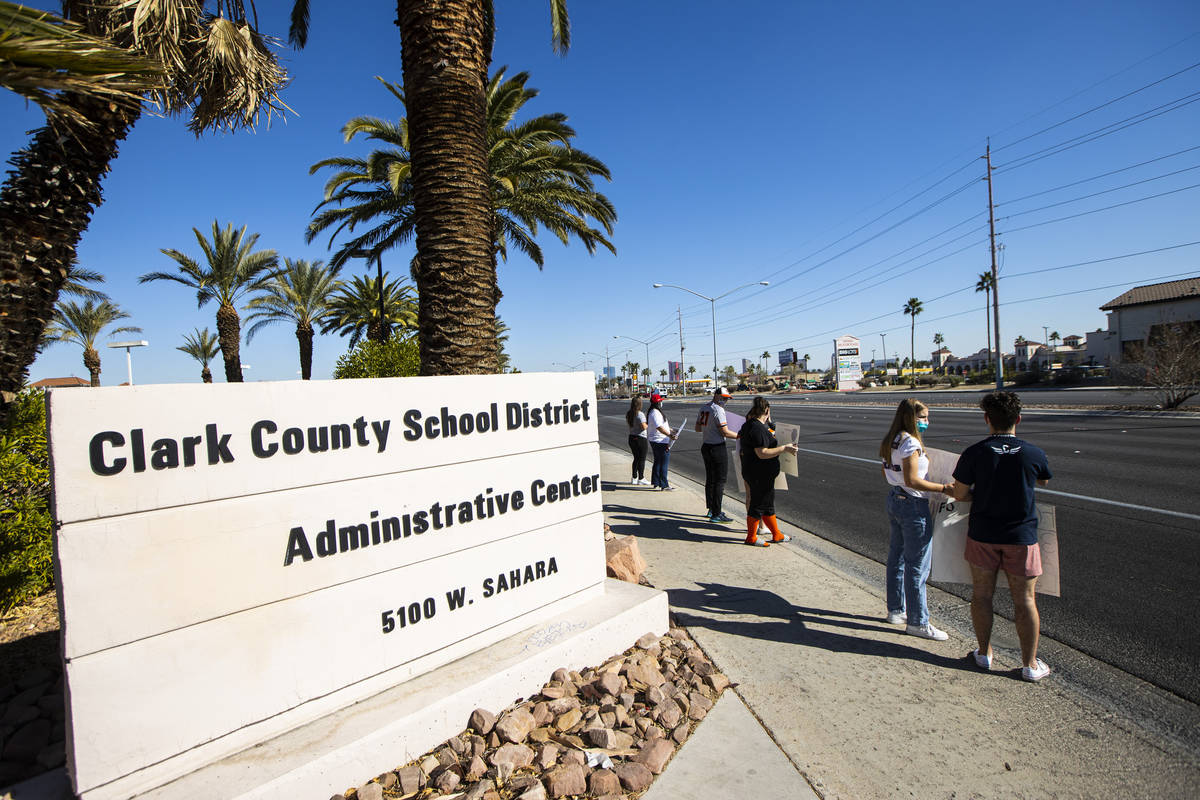 Students and parents staged rallies at several Clark County School District schools Wednesday morning, making it clear that they feel their desire to see a return of high school sports is falling on deaf ears.

There was also a similar rally held at the CCSD administration building Monday afternoon, which about 25 people attended.

“They are not listening, and not only that, but we hear the superintendent (Dr. Jesus Jara) is standing his ground and saying if the students aren’t face-to-face, then no activities,” said Dennis Goughnour, whose created the Let Them Play Nevada Facebook page. “I think we’ve cracked the board of trustees, but it’s the superintendent that needs to give in on his stance.”

Jara has said while he understands the imporance of sports and activities to the high school experience, his main focus remains on instruction. Preschool to third-grade students are scheduled to begin a hybrid instruction model March 1, but there is no timetable for older students to return to the classroom, a prerequisite for a return of high school sports.

Goughnour spoke from the sidewalk in front of Coronado High, where his son Trey is a senior.

During the Feb. 3 CCSD board meeting, the time allotted for comments on non-agenda items was dominated by parents asking the board to consider a return for high school sports in the district.

Some parents asked for the subject to be added to the agenda as an item for Thursday’s school board meeting, but that had not happened as of Wednesday afternoon.

This is the second time there has been a rally held in front of the CCSD administration building. About 75 people joined together Jan. 28 to protest the district’s decision to cancel the fall sports season, which had been moved to the spring semester and was scheduled to begin in early March.

Some of the signs seen Wednesday read “Forgotten Class of 2021.”

“I would love to return to school. My mental health has been worse than normal because of the lack of social interaction,” said Shadow Ridge High senior Alhana Bellotte, who participates in Jr. ROTC cheerleading. “I’ve been in cheer since third grade, and it was building up to my senior year. I can’t cheer in college because I have knee problems, so this is my last year.”

Bellotte said today’s protest was the second time she’s set foot on the Shadow Ridge campus. The other was when she was there briefly to pick up a book for her calculus class.

She said she found comfort in the rally, since it showed she’s not the only one feeling the way she is.

“It was really emotional to be on campus again,” Bellotte said. “Our principal and athletic director came out and talked to us, and that was really nice because I haven’t seen them since last year.”

For juniors like Chaparral’s Rodney Alger and Sierra Vista’s Nicholas Torres, their concern is whether they’ll be able to play baseball. The spring sports season is scheduled to begin in April. The baseball season had just started last March when all sports were halted, and Alger and Torres don’t want to be shut down for a second straight year.

“Last year, we didn’t get to play much,” Alger said. “We were two games in, and I only got to play in one of them. I’ve been able to go to a field every once in a while and practice on my own, but that can only take you so far without a coach instructing you.”