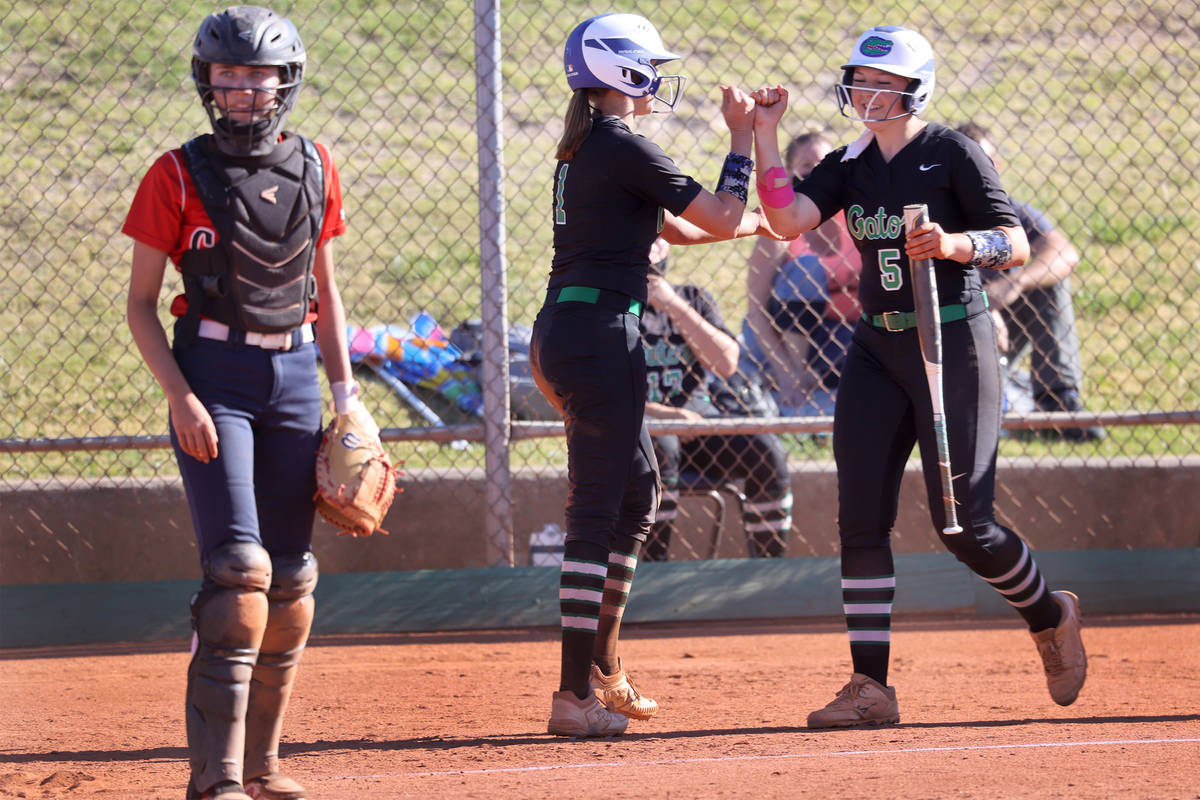 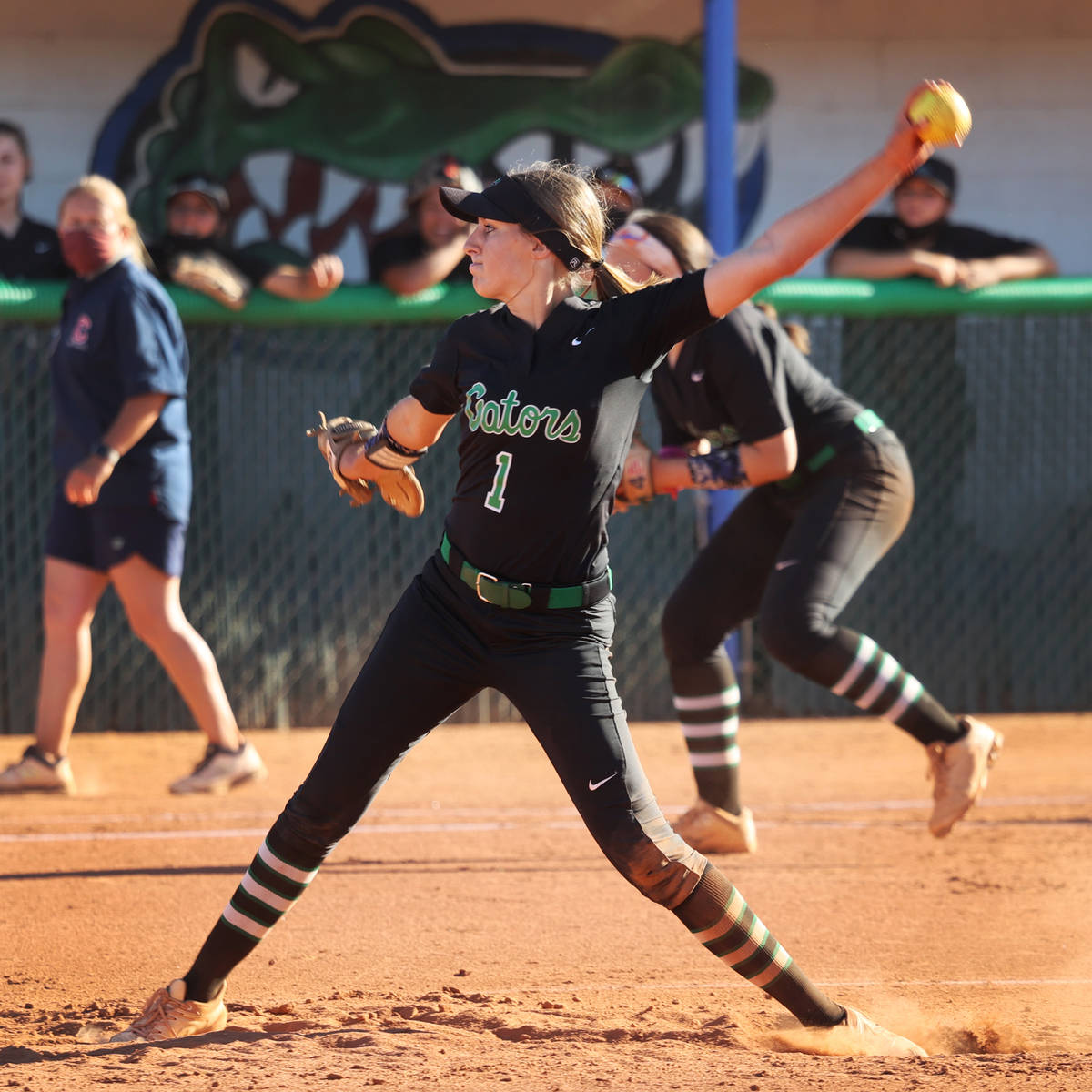 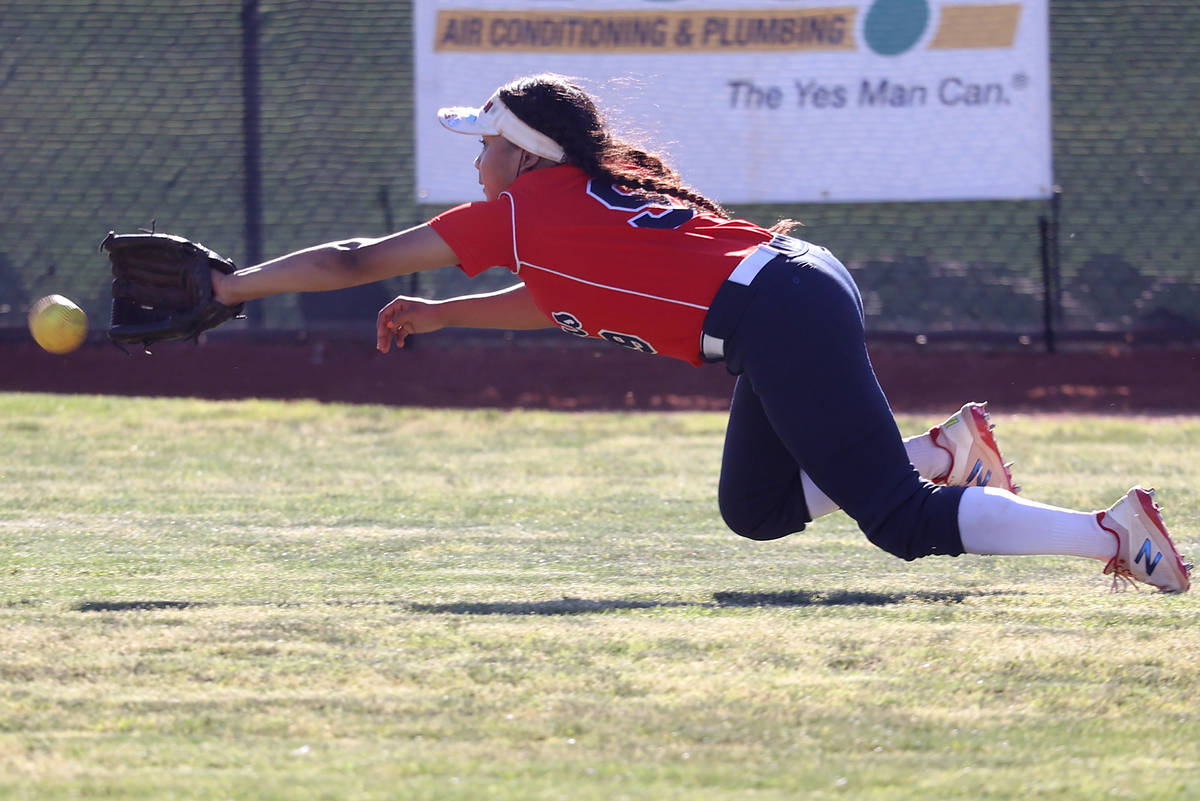 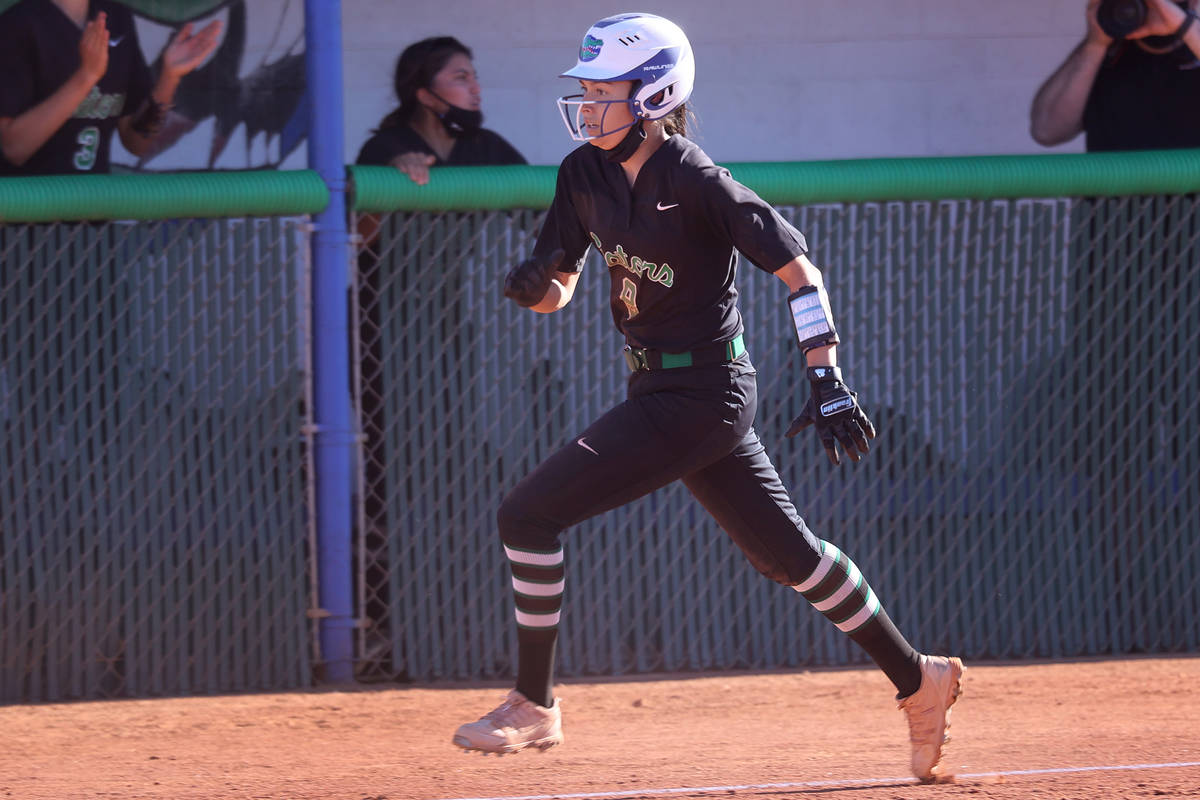 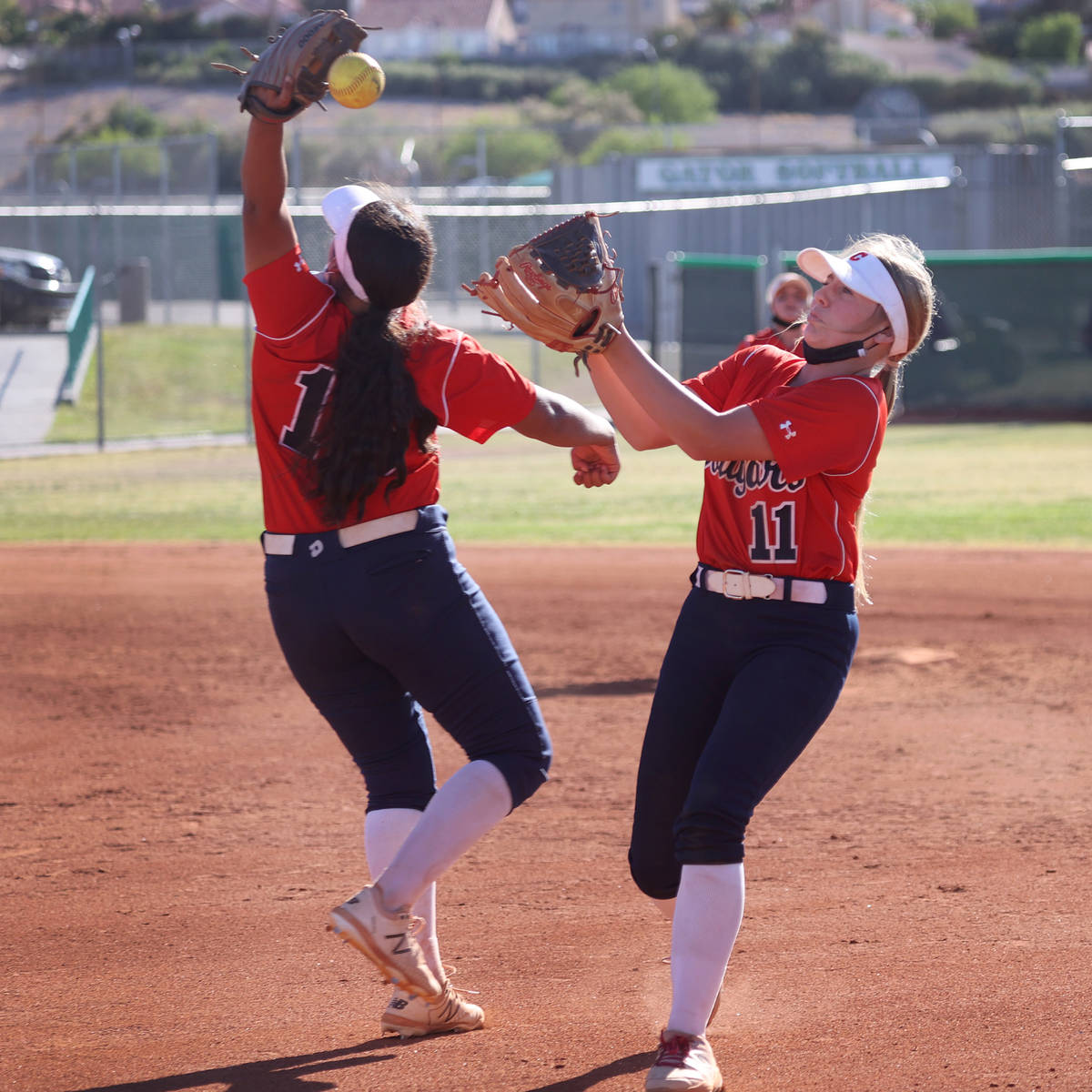 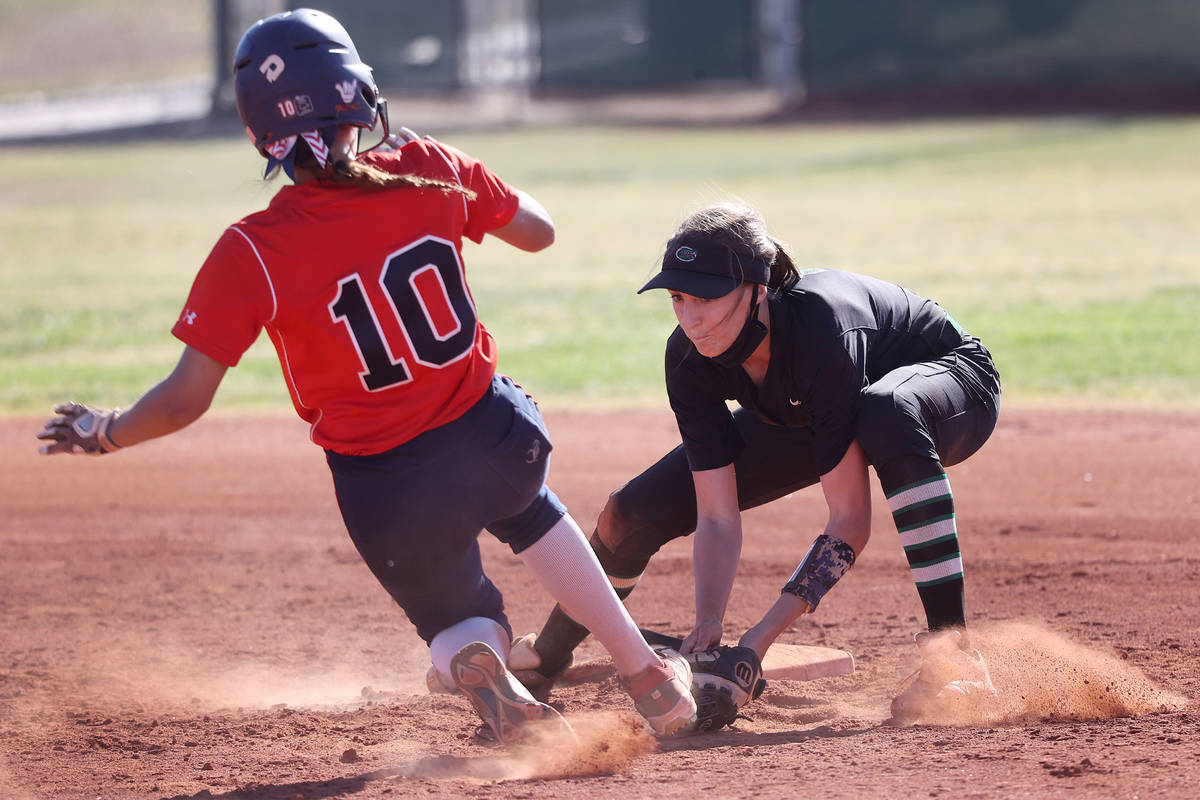 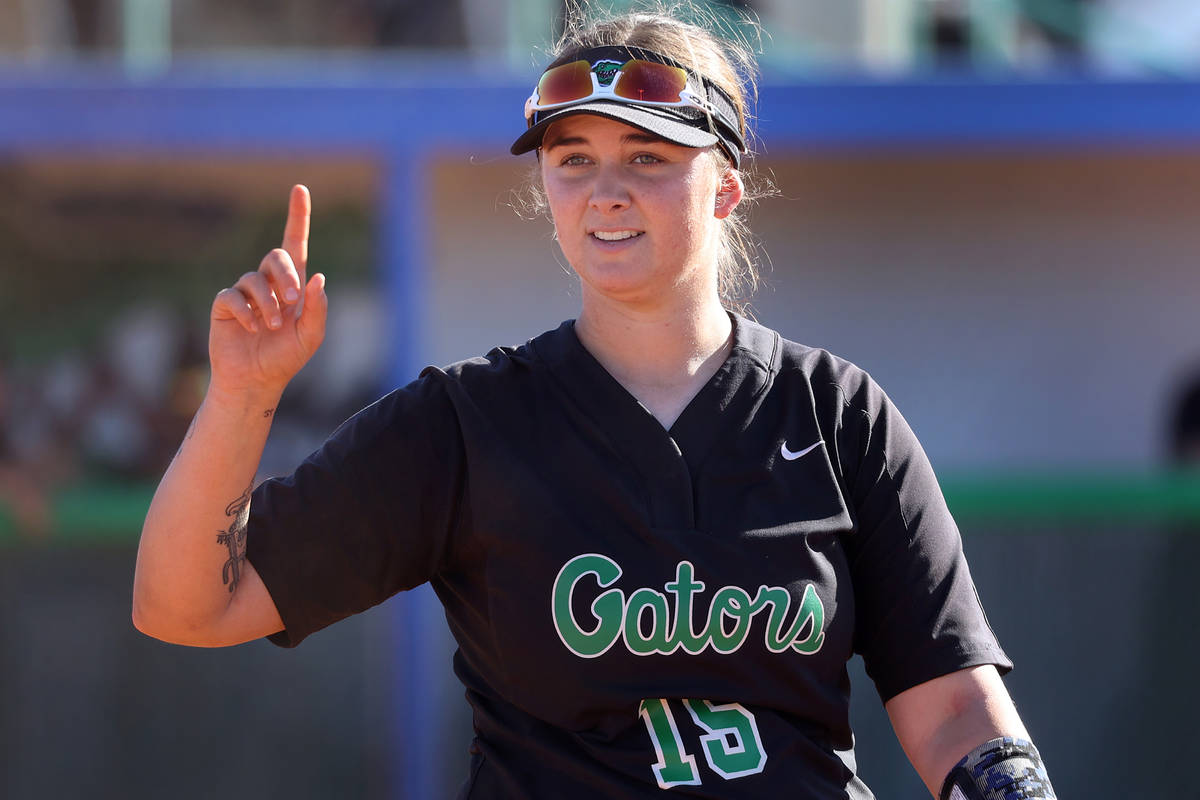 Green Valley's Alicia Ortega (15) gestures to her team after getting an out against Coronado in the sixth inning of their softball game at Green Valley High School in Henderson, Wednesday, April 28, 2021. (Erik Verduzco / Las Vegas Review-Journal) @Erik_Verduzco 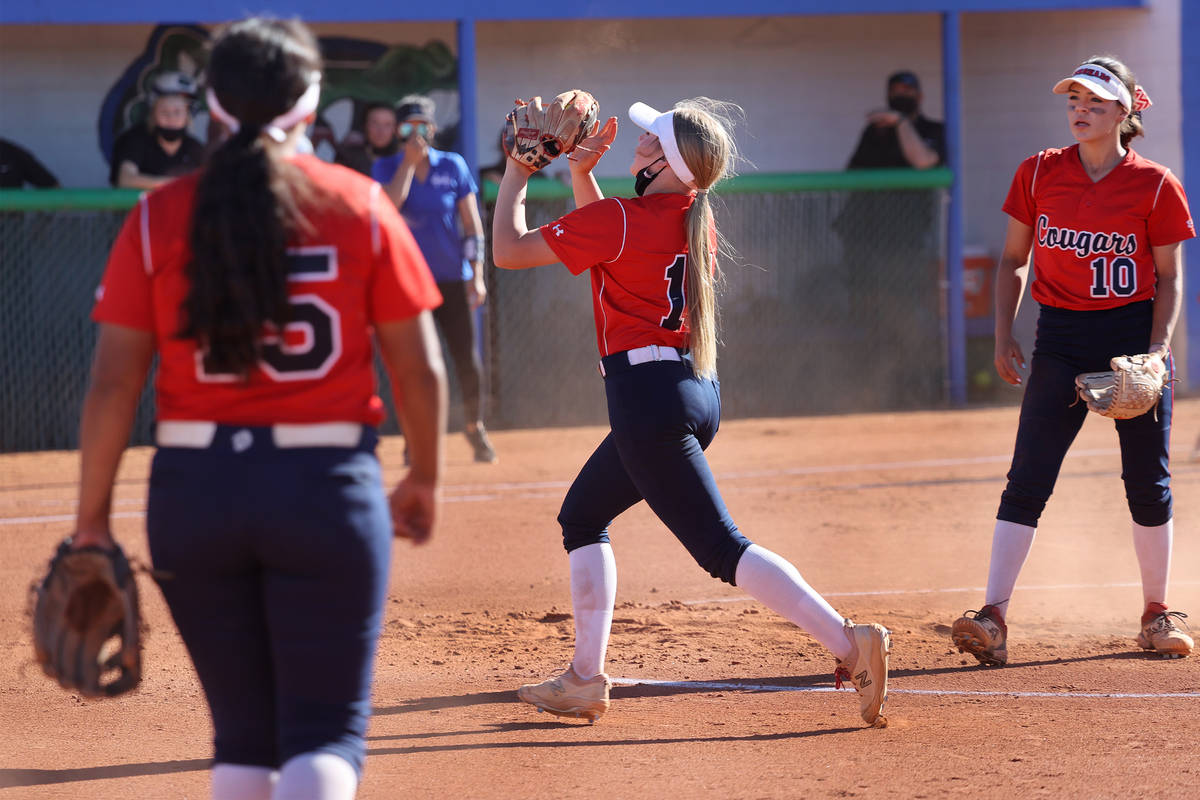 Coronado's pitcher Kendall Selitzky (11) makes a catch for an out in the fifth inning of a softball game against Green Valley at Green Valley High School in Henderson, Wednesday, April 28, 2021. (Erik Verduzco / Las Vegas Review-Journal) @Erik_Verduzco 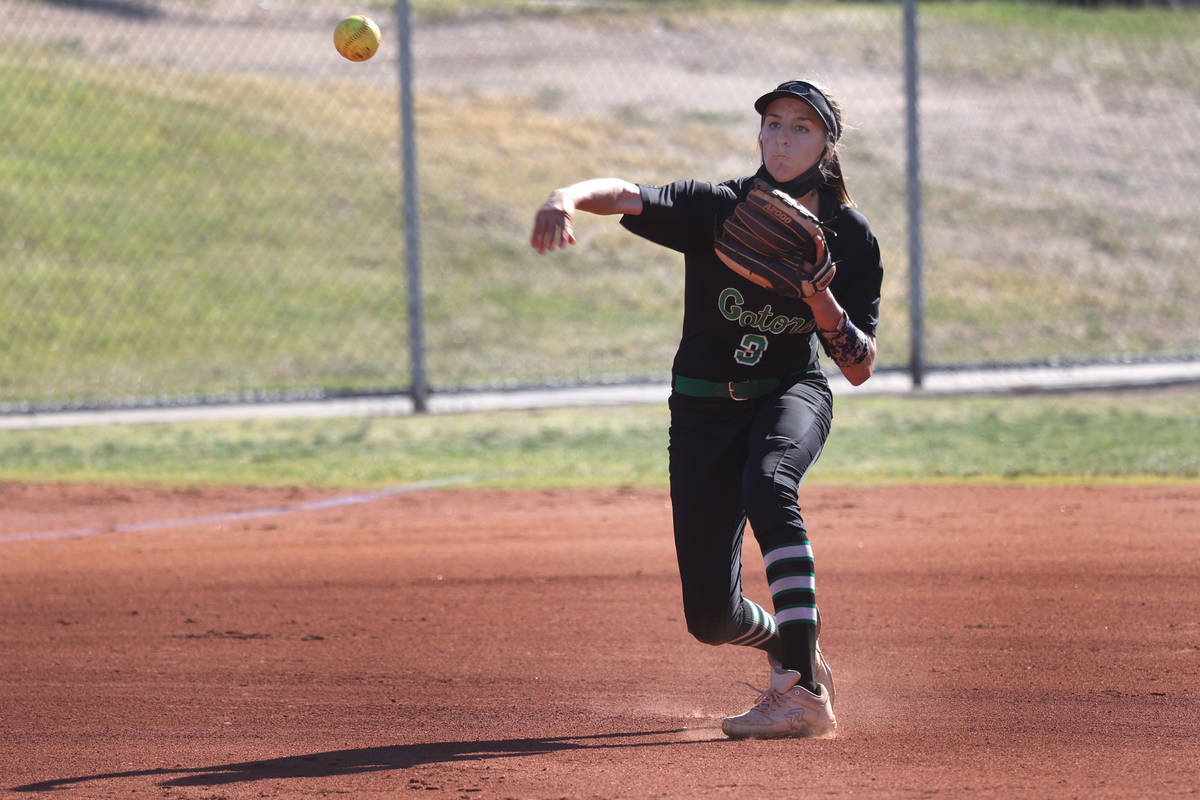 Green Valley's Mickey Morris (3) throws a ground ball to first base for an out against Coronado in the fifth inning of a softball game at Green Valley High School in Henderson, Wednesday, April 28, 2021. (Erik Verduzco / Las Vegas Review-Journal) @Erik_Verduzco 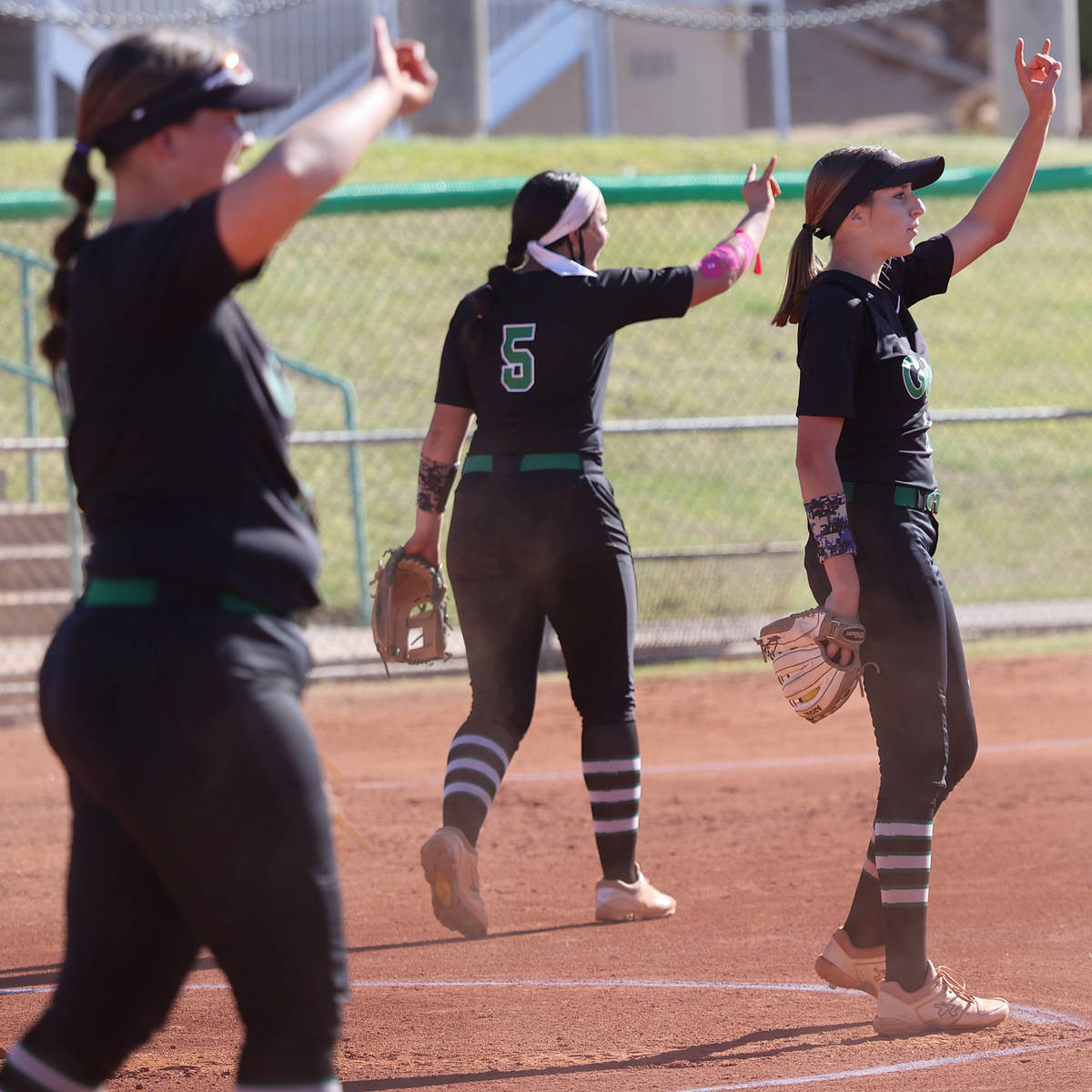 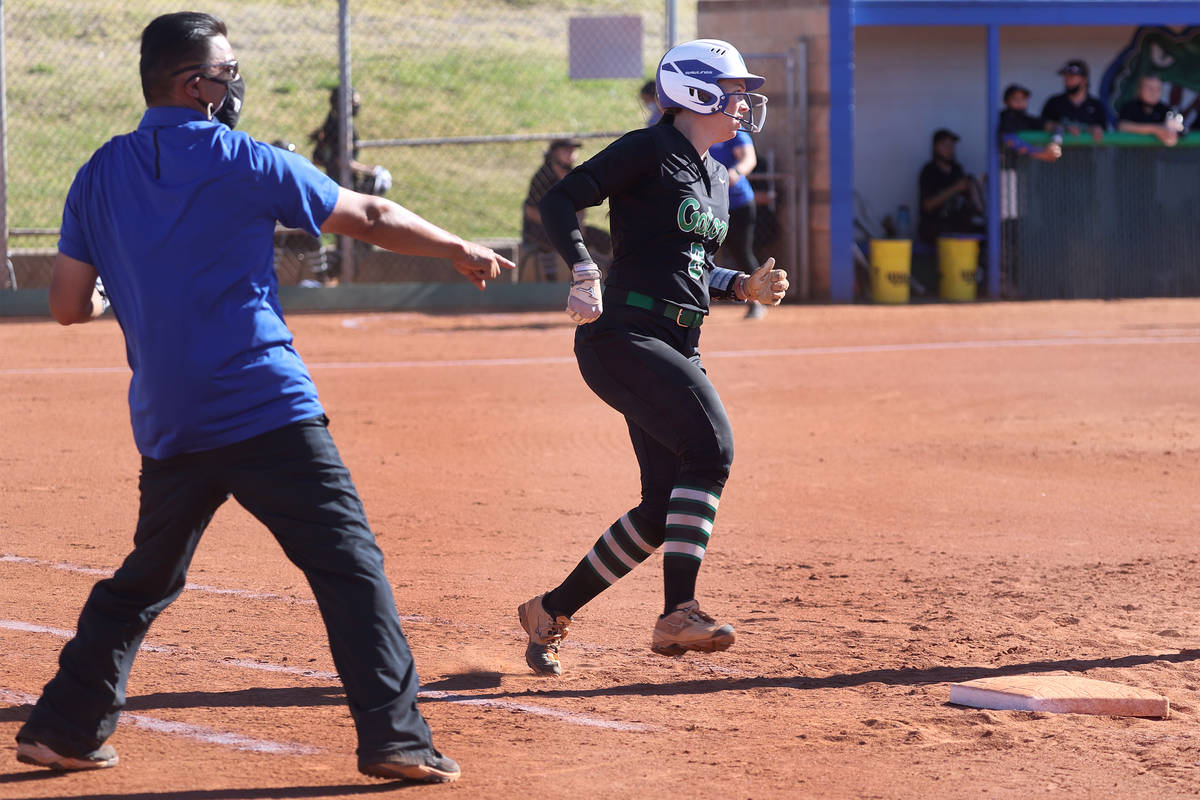 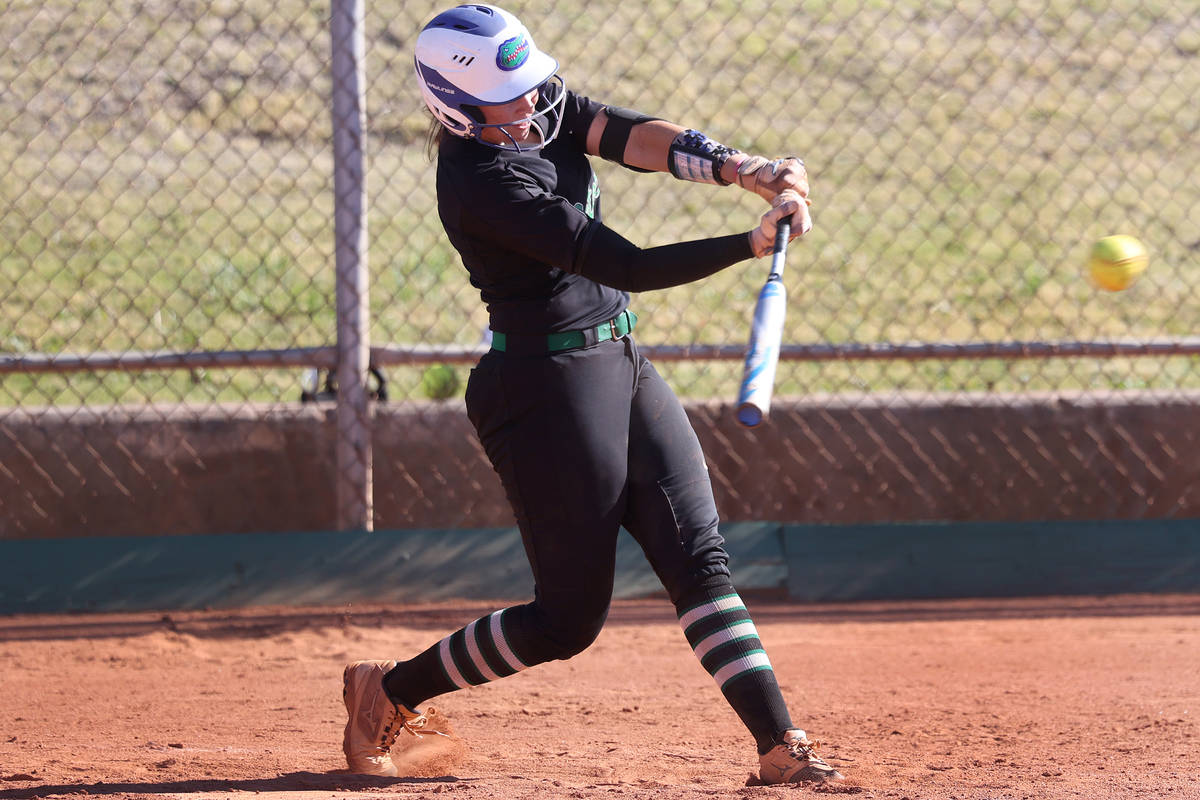 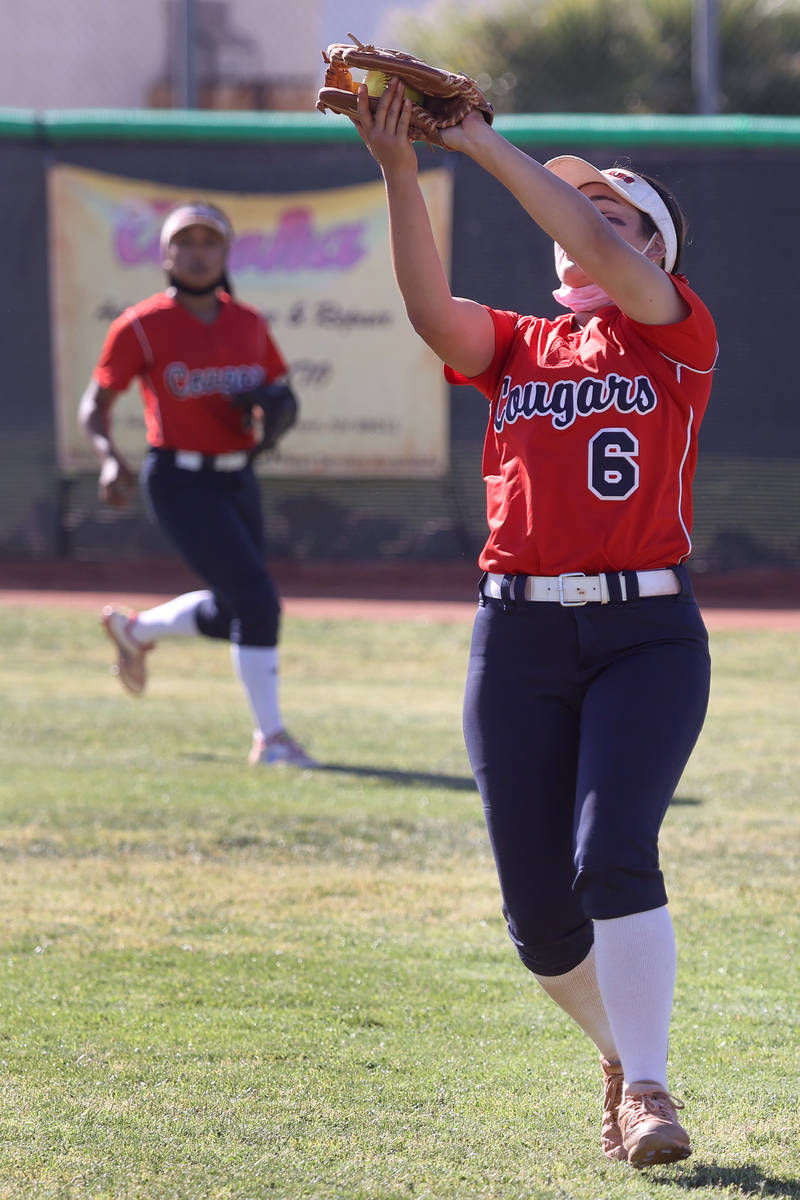 Coronado's Willow Bachiochi (6) makes a catch for an out against Green Valley in the fourth inning of a softball game at Green Valley High School in Henderson, Wednesday, April 28, 2021. (Erik Verduzco / Las Vegas Review-Journal) @Erik_Verduzco 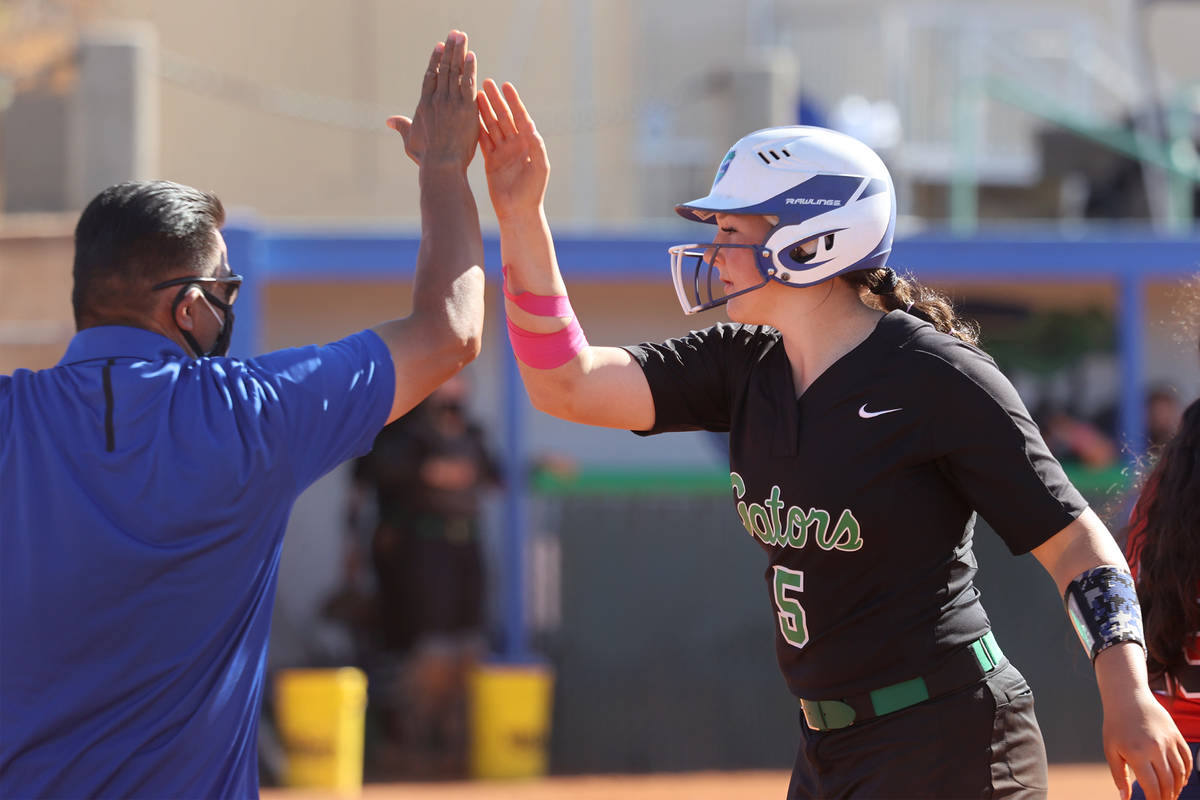 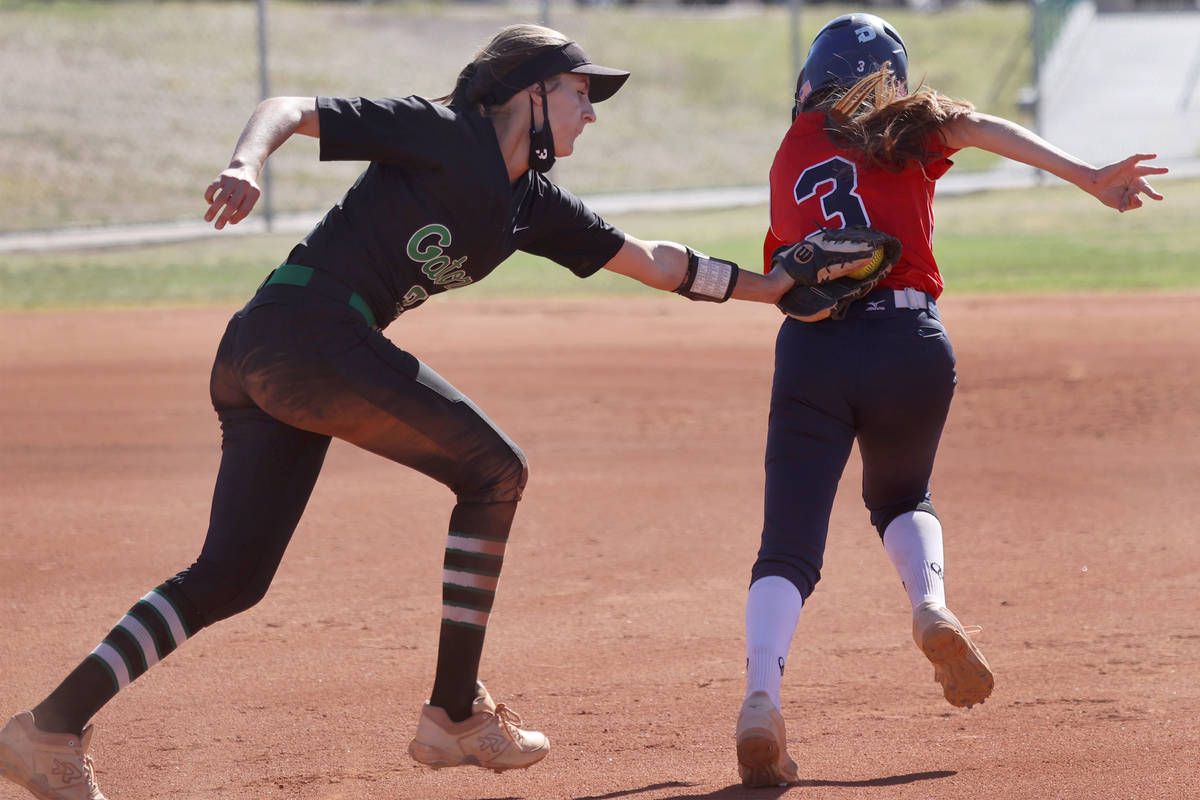 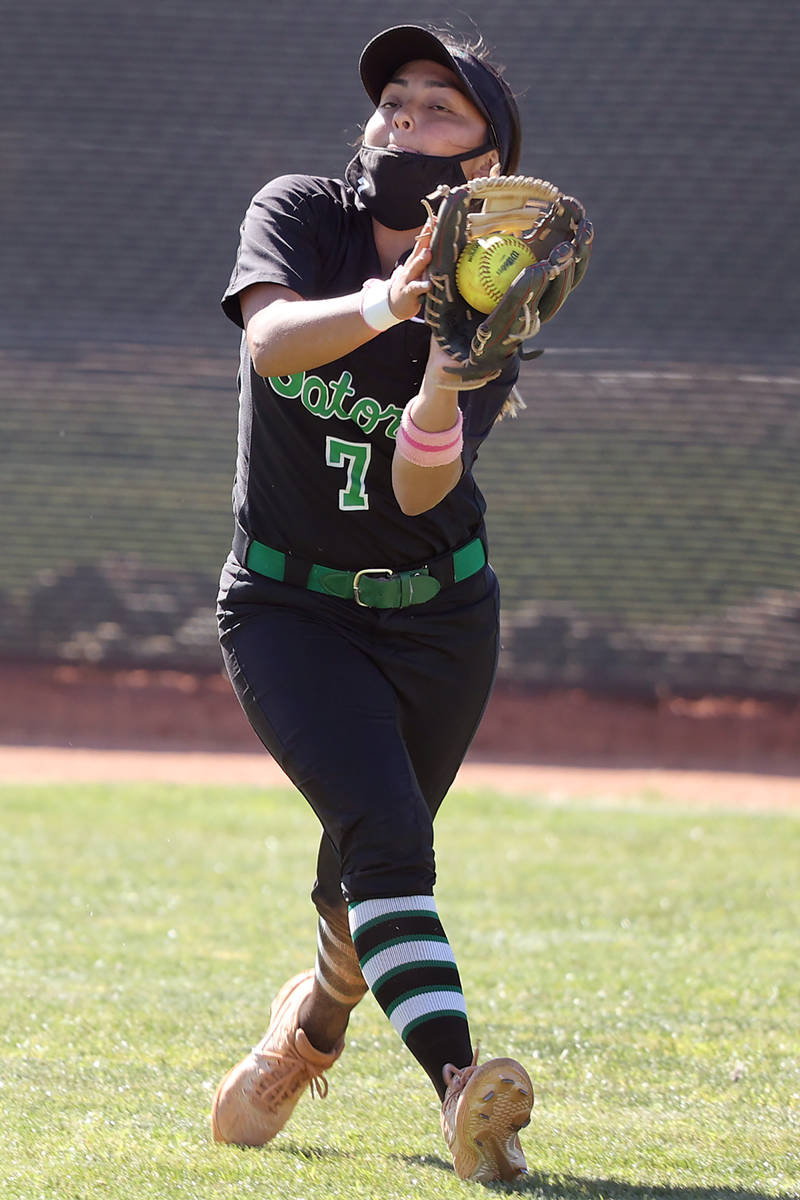 Green Valley's Cindy Martinez-Escamilla (7) makes a catch for an out in the outfield in the seventh inning during a softball game against Coronado at Green Valley High School in Henderson, Wednesday, April 28, 2021. (Erik Verduzco / Las Vegas Review-Journal) @Erik_Verduzco

Avari Morris did it all for Green Valley on Wednesday.

The sophomore left-hander threw a complete-game four-hitter, went 2-for-4 with a double, triple and two RBIs and kept Coronado off the board with a big defensive play.

Morris’ heroics, combined with some uncharacteristic sloppiness from Coronado, added up to a 6-1 win for the host Gators.

“She’s outstanding. She’s out there for a reason,” Green Valley coach Kathlyn Doiron said. “She took command of all her pitches out there, and we were really happy with the performance she had not only in the circle but at the plate.”

The Gators (3-1) benefited from three Coronado errors, two of which led to two unearned runs in the first inning.

Mikee Morris reached on a fielder’s choice and took second when a throw trying to complete a double play got away. Ava Mearideth followed with a ground ball to third that wasn’t fielded cleanly, putting runners on the corners.

Alicia Ortega and Hannah Watson took advantage, with each hitting an RBI single.

“I tell these girls daily we have to take advantage of the mistakes when they do happen,” Doiron said. “Coming from a team like (Coronado) that doesn’t make many mistakes, we have to take that extra base, make them make the mistakes. Our girls did a good job of staying with it and getting the job done.”

Coronado (4-2) threatened in the fourth with runners on first and second with one out. Willow Bachiochi hit a hard line drive back up the middle, but Avari Morris’ quick reflexes allowed her to grab the ball, and she threw to second to compete an inning-ending double play.

In the fifth, Avari Morris led off with a triple and scored when Mikee Morris dropped a squeeze bunt two batters later for a 3-0 lead.

The Gators broke the game open in the sixth with three runs, started by another error from the Cougars. With two outs, Alyssa Vigil popped up on the infield, but miscommunication between first baseman Jasmyn Lara and second baseman Kendall Selitzky let the ball drop.

Abby Cordova walked, Lina Ortega drove home a run with a double and Avari Morris followed with a two-run double.

Coronado loaded the bases in the seventh inning with no outs and got one run home on a groundout, but Avari Morris struck out the final two batters to end the game.