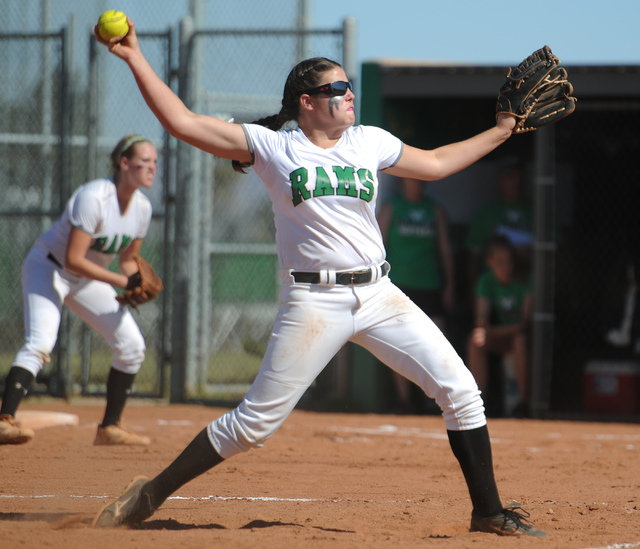 Rancho pitcher Brandy Marlett was at her best in the circle for three of the Rams’ four biggest Northeast League games, posting a 1.65 ERA and 16 strikeouts in 17 innings. Marlett was named league pitcher of the year, one of several local players honored. (Erik Verduzco/Las Vegas Review-Journal)

Brandy Marlett didn’t win a league title in her first three years as a member of Rancho’s softball team.

She made sure her final chance didn’t get away.

Marlett, who helped the Rams to a 10-0 mark in Northeast League play, was named the league’s pitcher of the year in a coaches’ vote.

“She had so much experience and knowledge of the game,” said Rancho coach Amanda Zunno. “She wanted to make sure that she went out on top and making people realize that this is where Rancho softball should be.”

Marlett split time in the circle with freshman Samantha Pochop, but threw in three of the Rams’ four biggest league games — against second-place Silverado and third-place Green Valley.

In those three games, Marlett posted a 1.65 ERA and 16 strikeouts in 17 innings. She tossed an eight-inning shutout, striking out six, in the Rams’ 1-0 win at Green Valley on April 9.

“She just has a passion for the sport and a passion for Rancho softball,” Zunno said. “She knew she could be a great senior leader, and her presence out there was big for us.”

Marlett also hit .313 (10-for-32) with 10 RBIs in league play, but her leadership on the field might have been her biggest asset and one of the Rams’ greatest weapons.

“She was like an extension of me,” Zunno said. “We have a lot of the same ideas. If I wasn’t telling the team something, she was. She knew what was expected. She pushed us to achieve things we didn’t know we could do.

“I don’t want to (have to) replace her. It will be really hard. She was around the program when her sister played here, and she’s been a part of Rancho softball for almost a decade. She left a legacy for other players. She set the bar high for other athletes that follow.”

4
Nevada Preps Athlete of the Week: The Meadows’ Sean Gosse