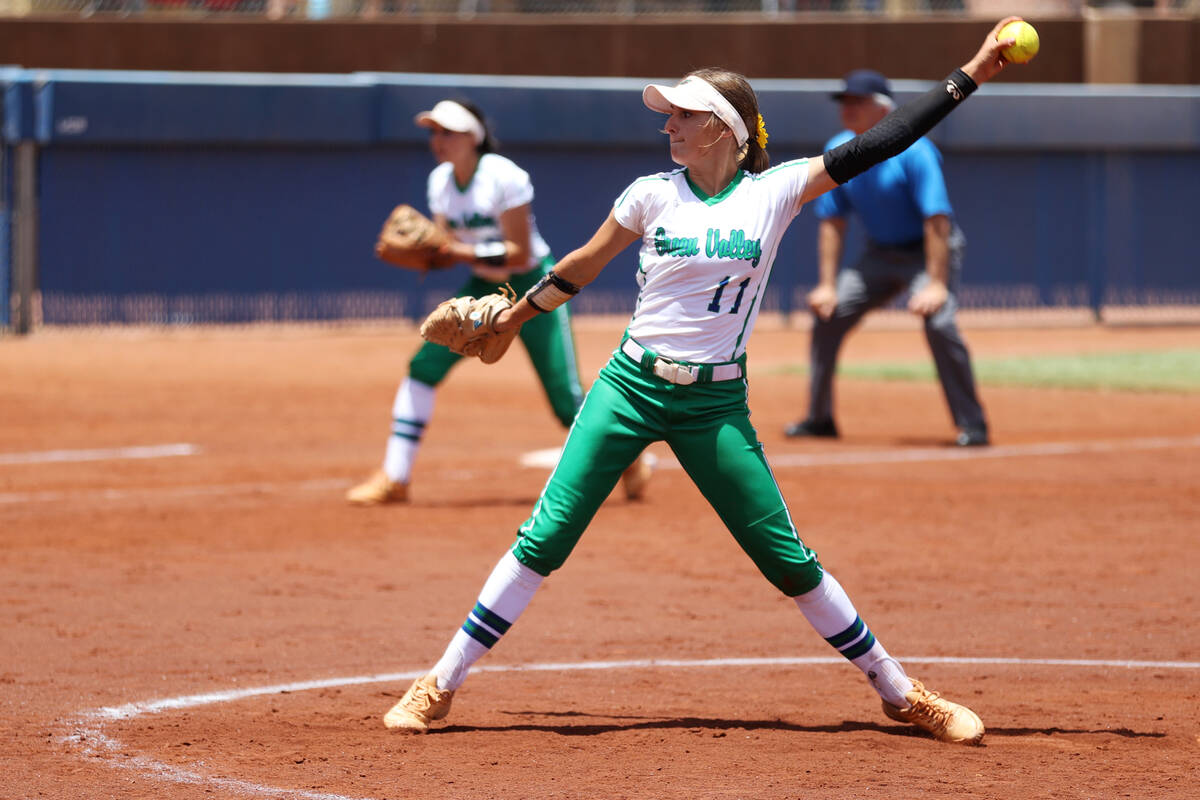 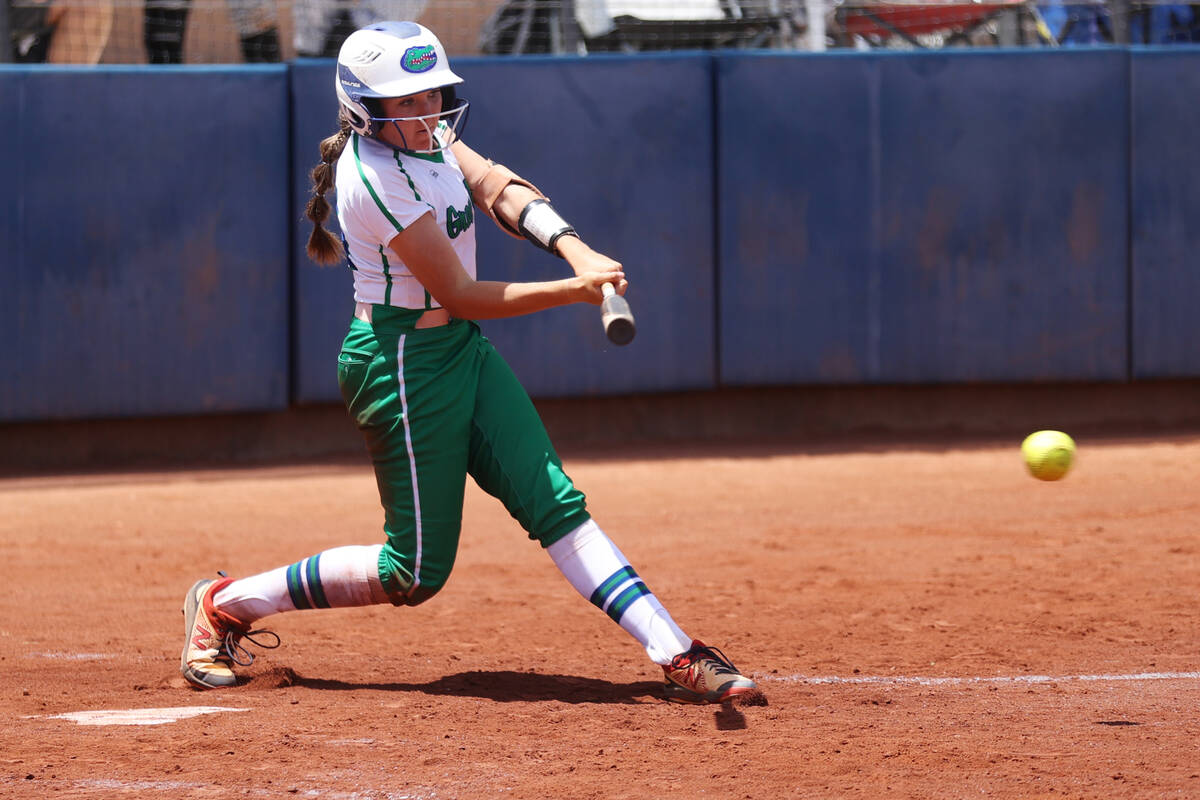 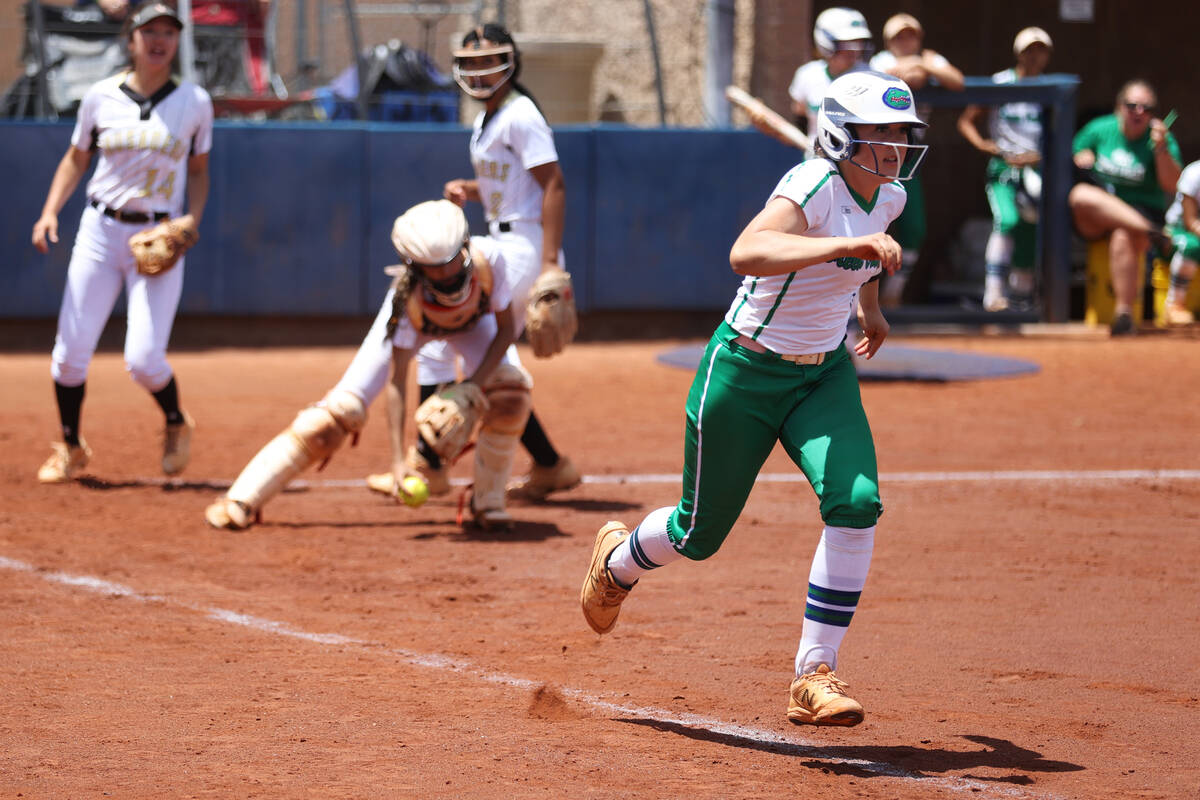 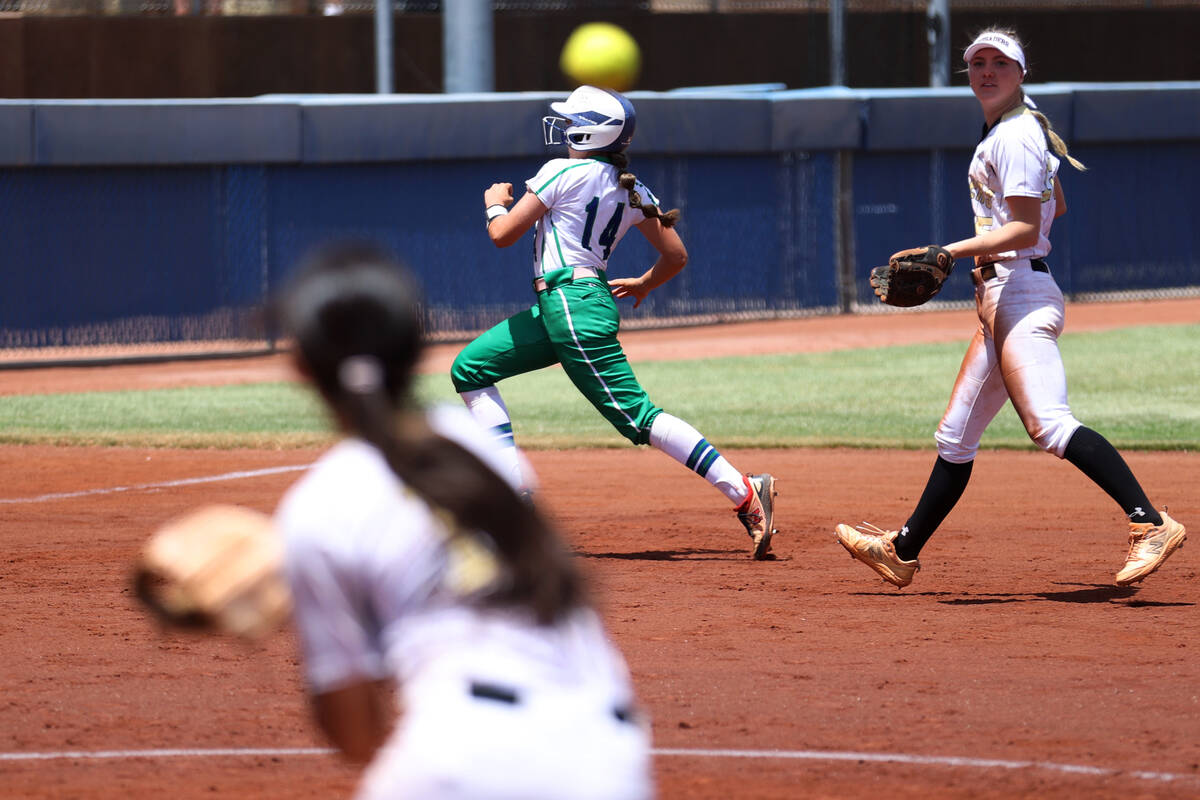 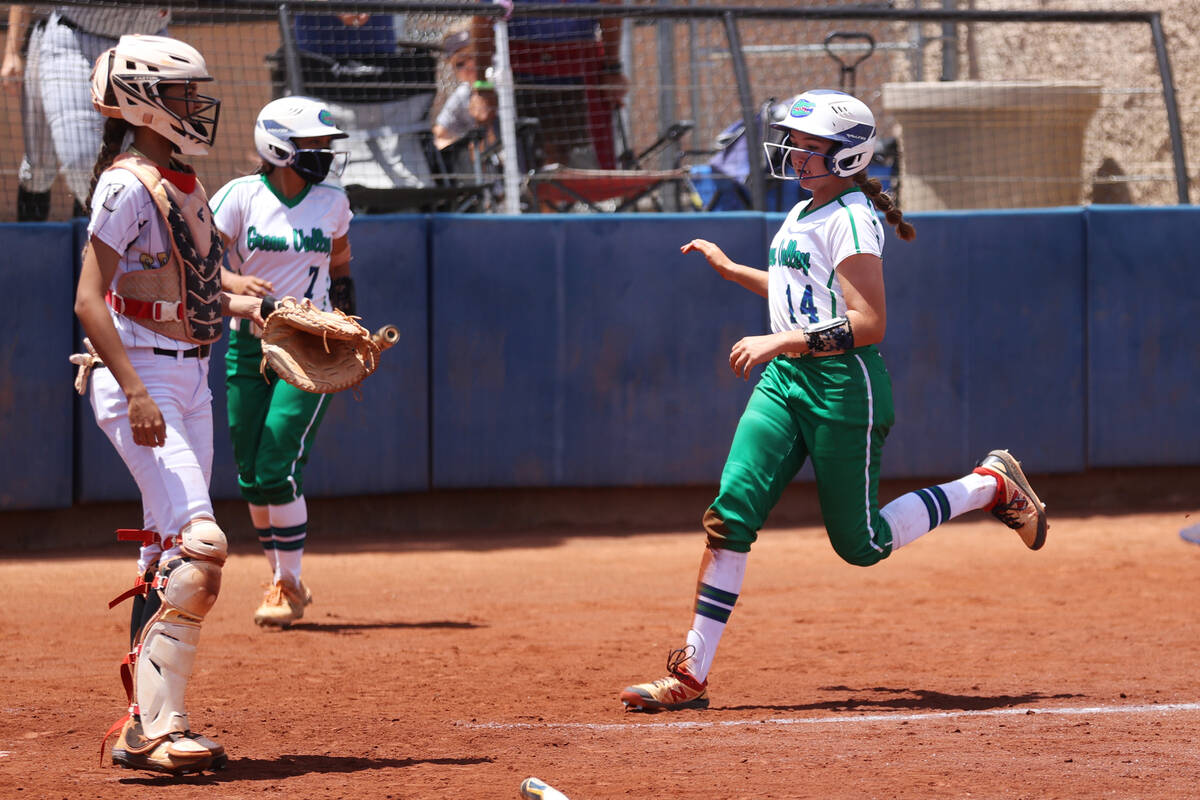 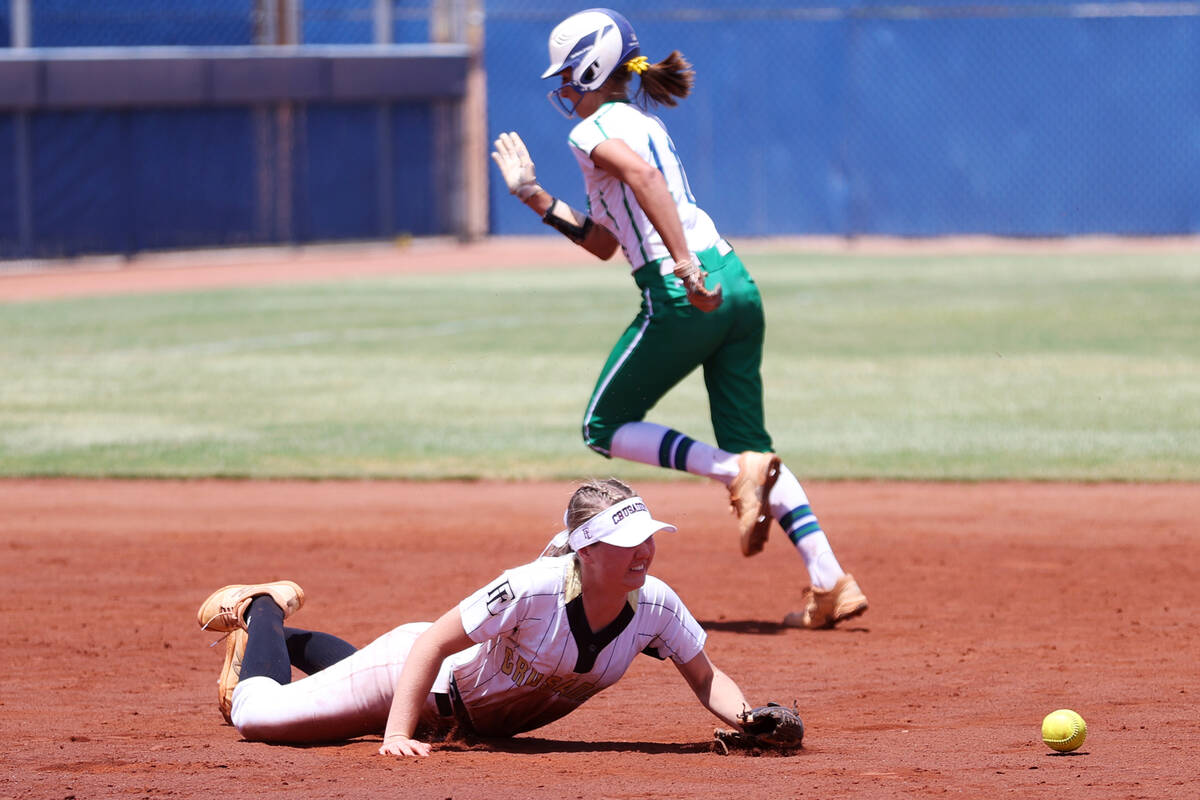 Faith Lutheran's Savannah Moore (15) knocks down a ground ball before picking it up for a Green Valley single during a Class 5A state softball tournament game at Bishop Gorman High School in Las Vegas, Friday, May 20, 2022. (Erik Verduzco / Las Vegas Review-Journal) 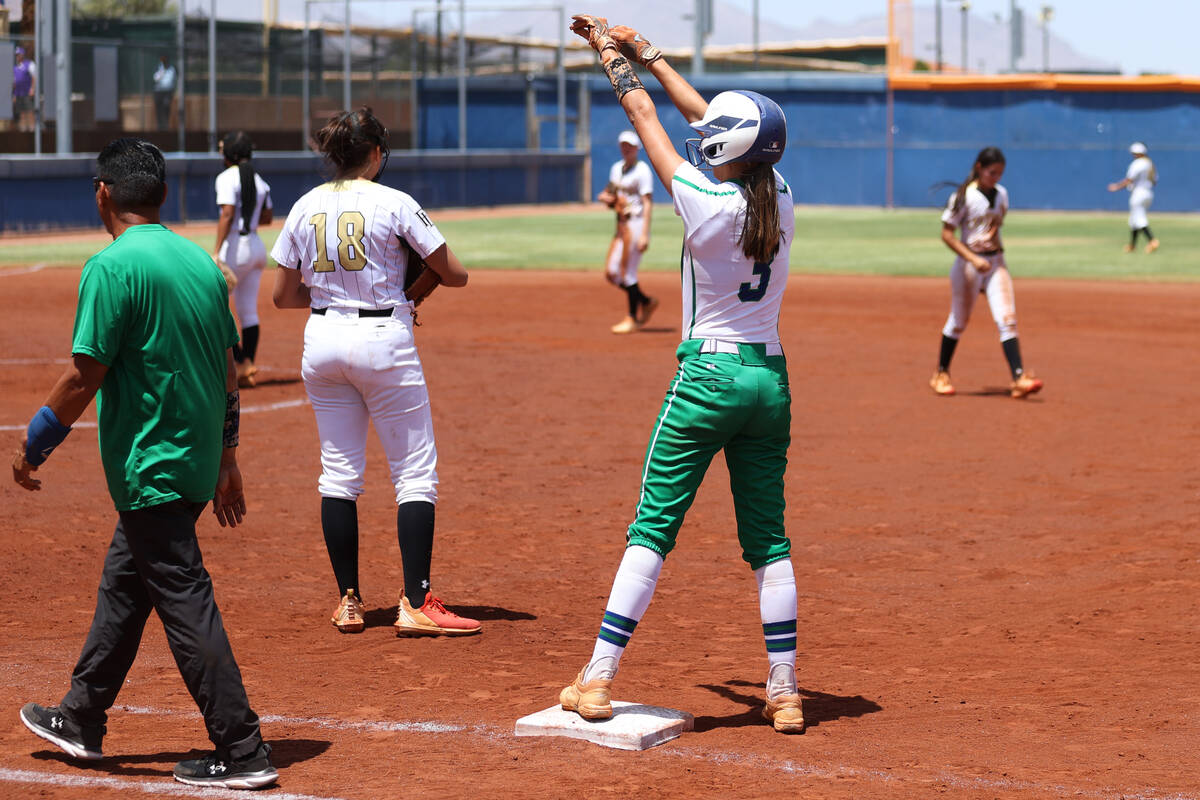 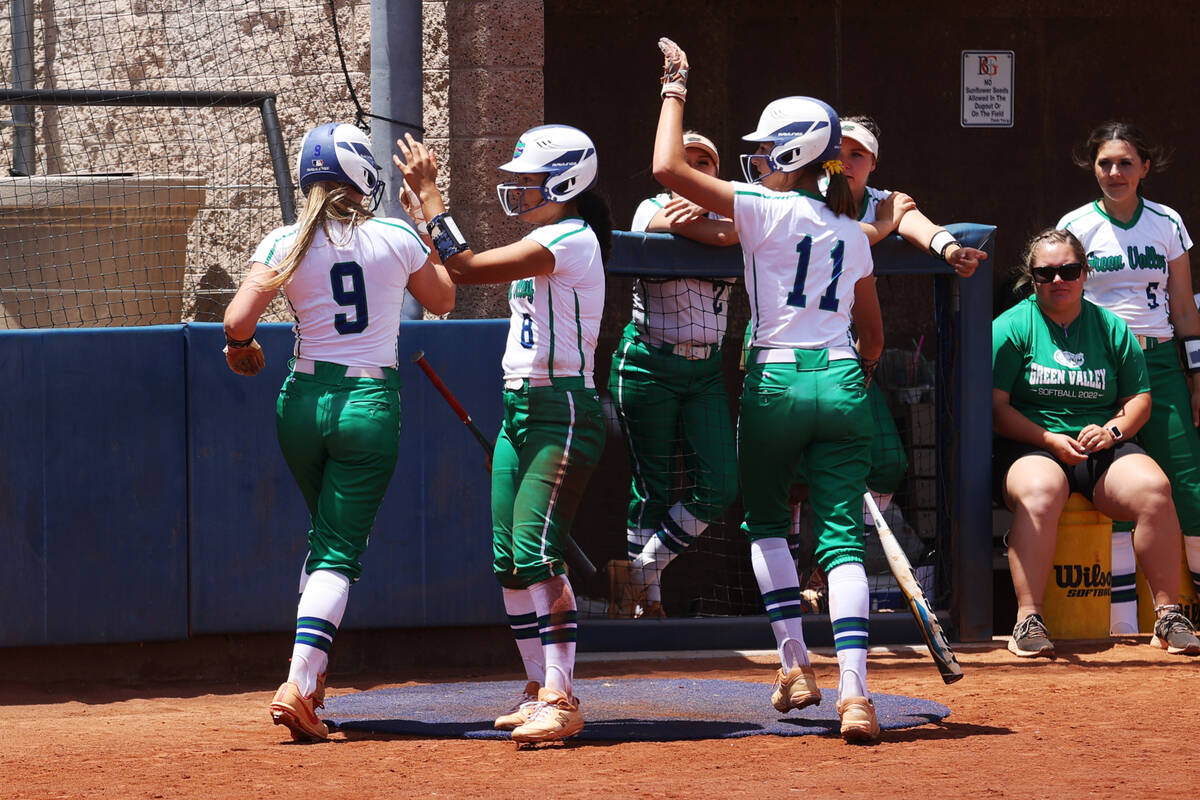 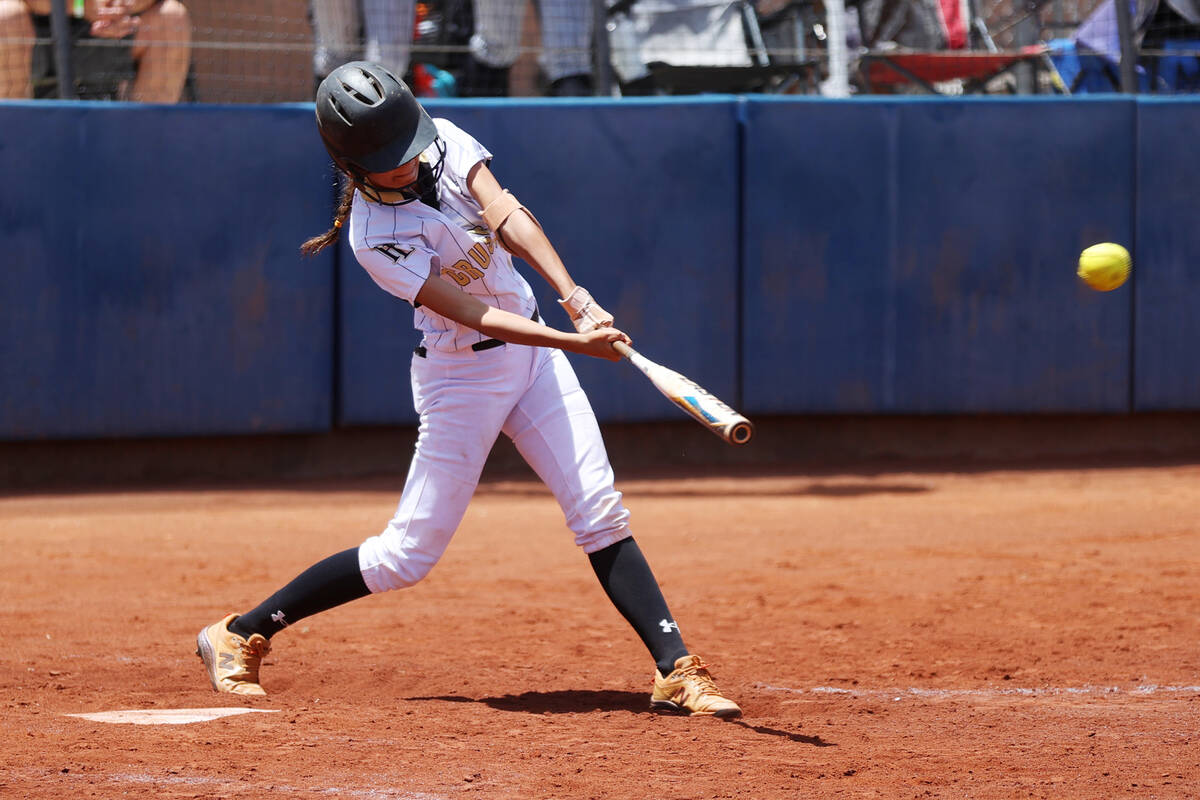 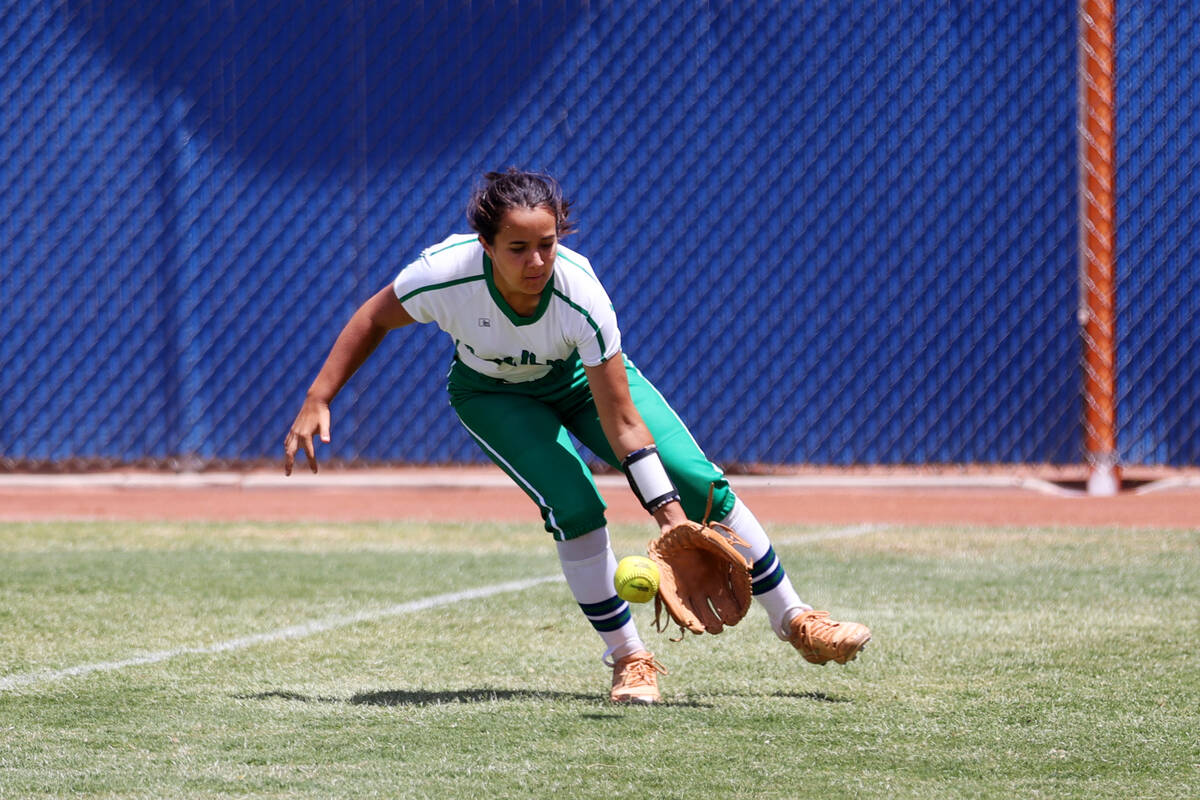 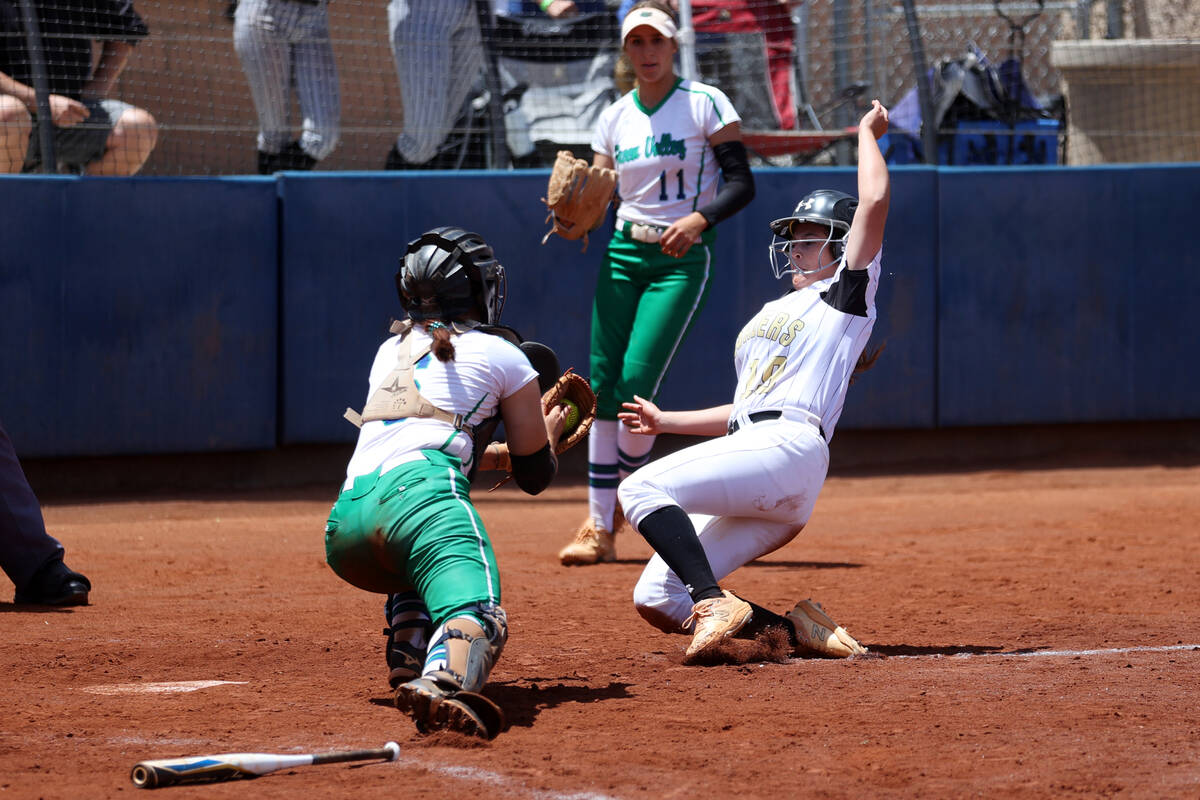 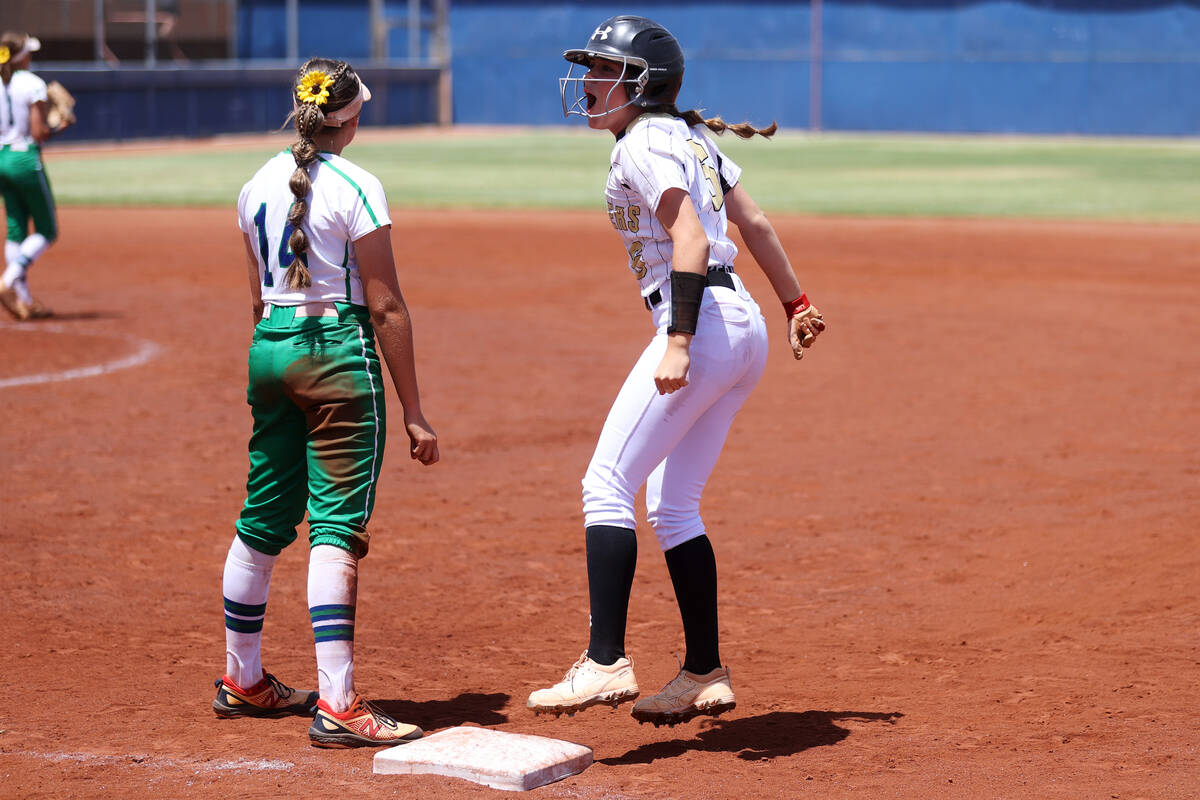 After Thursday’s loss to Douglas in the opening game of the Class 5A state softball tournament, Green Valley coach Kathlyn Doiron was disappointed in her team.

It wasn’t that Green Valley lost, but that it did so by not playing “Gator softball.”

Doiron was much happier Friday after the Gators won two games to reach the championship round. They defeated Faith Lutheran 6-2 in the first elimination game, then held off a late charge from Spanish Springs in the loser’s bracket final for a 2-1 victory at Bishop Gorman.

“Now you know why I was so disappointed yesterday, because this is what Gator softball is all about,” Doiron said. “This is exactly the team I know, that I see day in and day out. Seeing what I saw yesterday, I said we’re just going to flush that. They’re mature enough to do it, so I wasn’t worried, but I’m so proud of them today.”

Green Valley will play Douglas at 10 a.m. Saturday at College of Southern Nevada. If the Gators win, they will play another game with the state championship on the line.

Morris painted the outside corner against Spanish Springs. She struck out 13 and limited a potent Cougars lineup to four singles.

Green Valley took a 2-0 lead in the second inning when Morris singled up the middle with the bases loaded and Gabrielle Machida later came home on a wild pitch.

It stayed that way until the seventh, when Spanish Springs mounted a comeback. Mackenzie Trocke singled home a run, and the Cougars had runners on the corners with one out.

But the next play proved pivotal, as Spanish Springs’ Layni Noonkester failed to get a squeeze bunt down, and Brooke Baxter was caught too far off third base for the second out.

“That was a huge momentum shift,” Doiron said. “And I have to credit these girls for being heads up and knowing what to do next. Sometimes people will freeze up on a play like that, but (catcher Angelina Ortega) was right there, and (shortstop Michaela Morris) was in the spot she needed to be, and they executed.”

Morris finished the game with a strikeout to send the Gators to the championship round.

Against Faith Lutheran, Morris allowed eight hits and struck out only one but worked out of several jams. The first came in the first inning, when Faith Lutheran had runners on second and third with no outs, but Morris got three straight shallow fly balls to keep the game scoreless.

The Gators took the lead in the second with one run, then added three in the fourth. The Crusaders scored one in the bottom of the fourth, but it could have been a bigger inning, as they had a runner thrown out at the plate and another called out for leaving the base early.

“I don’t want to take anything away from Green Valley,” Faith Lutheran coach John Chilman said. “They’re a great team. We left too many people on base. We didn’t play a bad game, but Green Valley played better. … The girls did great. It’s an experience they’ll cherish and carry with them forever.”