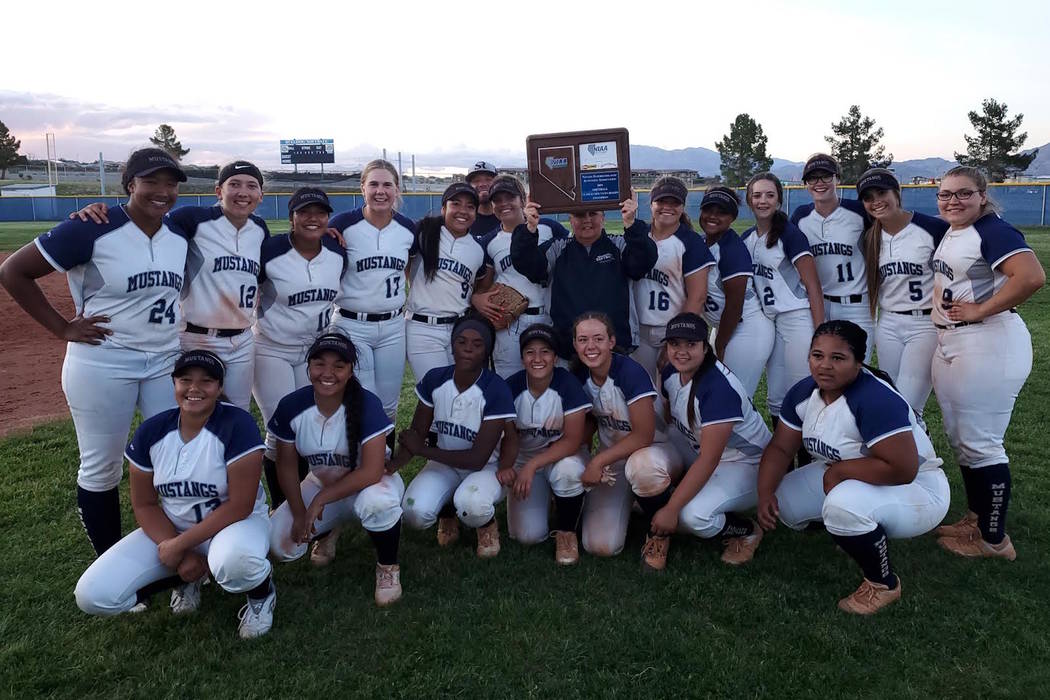 Shadow Ridge poses with the Mountain Region trophy after defeating Centennial, 3-2 in 11 innings and 1-0 in 8 innings on Friday, May 10, 2019 at Centennial High School. W.G. Ramirez/Las Vegas Review-Journal

Shadow Ridge senior Caitlin Covington had been biding her time, waiting for the right opportunity to deliver a huge blow at the plate during the Mountain Region tournament at Centennial.

Finally, after 5 hours, 20 minutes, and 19 innings over two games, she cashed in.

Covington blasted a walk-off, home run in the bottom of the eighth inning Friday to give the Mustangs a 1-0 win over Centennial in the championship game.

Shadow Ridge beat Centennial, 3-2 in 11 innings in the first game Friday, forcing a winner-take-all championship. The Mustangs (27-2) will face Coronado (26-7) in the Southern Nevada championship game at noon Saturday at Bishop Gorman.

Both Shadow Ridge and Centennial (32-6) advance to next week’s Class 4A state tournament.

“We wouldn’t have even won if my team wasn’t out there making plays behind our pitcher and getting the base hits that we need,” said Covington, who said she is hoping to stay home and walk-on for UNLV’s softball team. “This team has worked so hard for this. It’s all a team effort.”

It was the second time Covington came up with a monster play for the Mustangs, as she came up with the play of the game at home plate in the teams’ first game. Right fielder Kyanna Galvan caught Natasha Lawrence’s fly ball and fired a dart to Covington, who formed a perfect wall to block Centennial’s Jackie Perez and make the tag in the bottom of the 10th to prevent a winning run.

“We count on (Covington), and we know she’s eventually gonna come through, especially when it’s about the win,” Shadow Ridge coach Julia Meyn said. “When it gets down and dirty, she always comes through. She really deserves this; she’s been wanting this since the start of this season.”

Both teams scored runs in the seventh and ninth innings, before the Mustangs were able to hold on for the win.

Covington was 2-for-5 with two doubles to lead Shadow Ridge.

Samantha Lawrence was 2-for-5 with a pair of doubles and a run scored to lead Centennial.