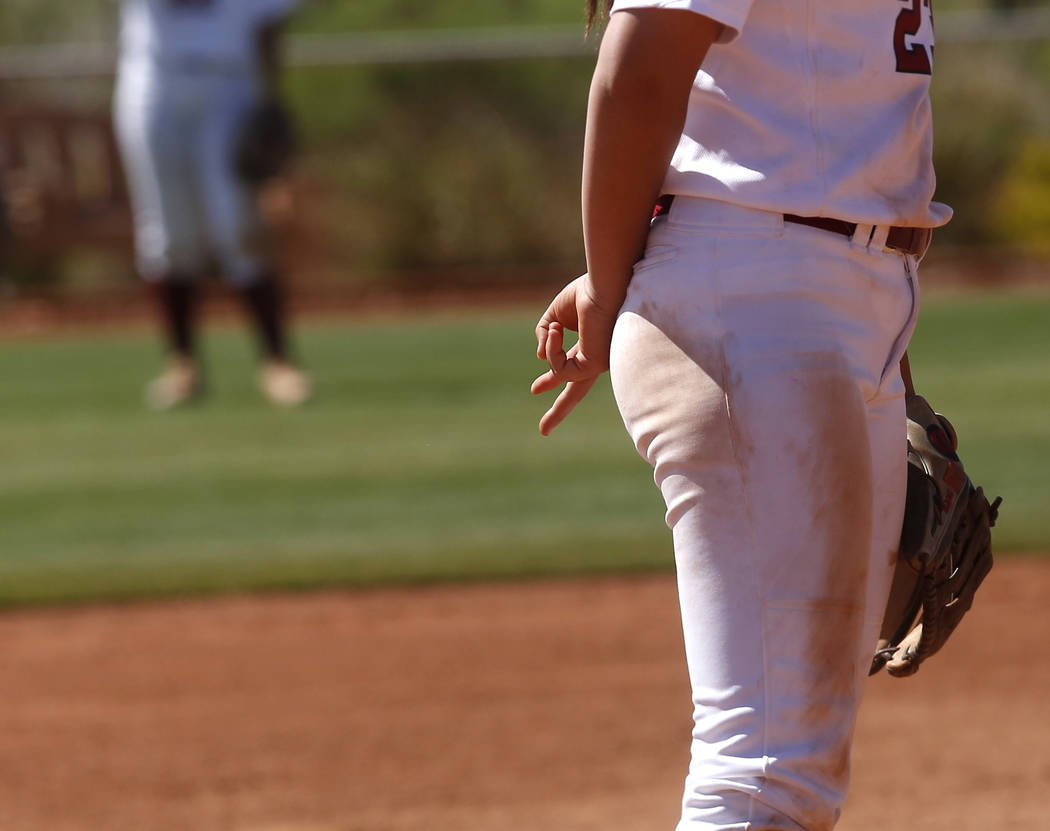 Amanda Sink spun a one-hitter Friday, striking out 13 and walking three, to help Centennial’s softball team to an 8-0 win over Manti (Utah) in the Spring Showdown in St. George, Utah.

Deanna Barrera was 4-for-4 with a home run and three RBIs for the Bulldogs, who led the Templars 7-0 after four innings.

Ashlynn Heck went 2-for-2, and Natasha Lawrence was 2-for-3 with a double and an RBI for Centennial, which also got a home run from Tatum Huntly.

Centennial 9, Wasatch (Utah) 2 — At St. George, Utah, Barrera was 2-for-4 with a home run, a double, and two RBIs and scattered eight hits in seven innings as the Bulldogs topped the Wasps in the Spring Showdown.

North Sanpete (Utah) 10, Desert Oasis 7 — At St. George, Utah, the Hawks scored nine runs in the first and held on to beat the Diamondbacks in five innings in the March Warm-Up Tournament.

Meaghan McInerney and Jada Moreno each went 2-for-3 with a double and a home run for Desert Oasis. McInerney set a school record with her 154th hit.

Makayla Rickard added a home run for the Diamondbacks.

Idaho Falls (Idaho) 7, Desert Oasis 5 — At St. George, Utah, the Diamondbacks scored five runs in the bottom of the seventh inning, but fell short against the Tigers in the March Warm-Up Tournament.

Legacy 11, Elko 1 — At St. George, Utah, Madison Ruiz was 2-for-2 with a solo homer and three runs as the Longhorns beat the Indians in four innings at the March Warm-Up Tournament.

Kayla Smith threw a three-hitter to get thew in.

Ruiz was 2-for-3 with a run and an RBI, and Jenna Stosich went 1-for-1 with two runs and an RBI for Legacy.

Cheyenne 15, Sunrise Mountain 0 — At Cheyenne, Madelynn Kennedy struck out six batters and allowed no hits as the Desert Shields rolled past the Miners in three innings.

Morgan Harris hit a leadoff home run in the bottom of the first inning of the opener, and Jessica Brede was 2-for-2 with a triple and three RBIs for the Panthers.

In the second game, Taylor Higbee was 2-for-2 with a triple and four RBIs for Pahranagat Valley.

Rancho 9, Boulder City 5 — At Needles, California, Liliana Gutierrez went 2-for-2 with a double, one RBI, and two runs as the Rams defeated the Eagles in a bracket play game in the Colorado River Invitational.

Ryann Reese and Abby Giunta each hit a double for Boulder City.

Silverado 20, Cathedral City (Calif.) 2 — At Needles, California, Megan Johnson went 2-for-2 with a home run and two RBIs as the Skyhawks routed the Lions in three innings in bracket play.

Destiny Capers was 1-for-1 with two runs and two RBIs for Silverado, which had seven hits.

Palo Verde Valley (Calif.) 13, Faith Lutheran 3 — At Needles, California, Alexis Ruvalcaba was 2-for-2 with three RBIs, and Erika Gonzalez went 2-for-2 with two RBIs as the Yellowjackets downed the Crusaders in a three-inning game in bracket play.

Kelsey Howryla was 1-for-2 with a home run and two RBIs for Faith Lutheran.

Pahrump Valley 17, Chino Valley (Ariz.) 1 — At Needles, California, Terrena Martin and Skyler Lauver each had three hits, including a double, as the Trojans routed the Cougars in four innings in bracket play.

McKayla Bartley and Samantha Riding each homered for Pahrump, which used a 10-run fourth inning to end the game via the mercy rule.

Durango 7, Boulder City 0 — At Needles, California, Madison Boyce spun a five-inning no-hitter to lead the Trailblazers by the Eagles.

Boyce struck out three and didn’t allow a walk. The Eagles had two hitters reach base on errors.

Juliana Kaupoe was 3-for-3 with a triple, a double and an RBI, and Ella Shuford went 1-for-3 with four RBIs for Durango.

Boulder City 13, Needles 7 — At Needles, California, Ryann Reese was 2-for-4 with three runs, and the Eagles scored six runs in the top of the fifth to top the Mustangs in five innings.

Imani Evans went 2-for-3 with three RBIs for Needles.

Pahrump Valley 9, Faith Lutheran 3 — At Needles, California, Hailey Cuellar went 1-for-1 with a run and an RBI to lead the Trojans by the Crusaders.

Lauver was 1-for-2 with a run and an RBI for Pahrump.

Pahrump Valley 8, Durango 6 — At Needles, California, Allyson Rily hit a two-run homer to lead the Trojans past the Trailblazers.

Shuford and Alyssa Geraldo had home runs for Durango.

Rancho 3, Silverado 2 — At Needles, California, Lorena De La Torre doubled and came around to score the winning run in the top of the fourth inning as the Rams edged the Skyhawks in four innings.

De La Torre doubled to lead off the fourth. She moved to third on a passed ball and scored on Alyssa Ortiz’s ground out to short.

Gutierrez was 2-for-2 with an RBI for Rancho.

Eldorado 5, Chaparral 1 — At Eldorado, the Sundevils made the most of six walks to beat the Sundevils top the Cowboys despite being no-hit.

Adriana Romero tossed a two-hitter and struck out 11 for Eldorado.

Western 18, Clark 5 — At Western, winning pitcher Brenna Rivera went 3-for-3 with three runs and an RBI as the Warriors downed the Chargers in four innings.

Mia Perez went 2-for-3 with a double and two RBIs for Western, which had 14 walks.

Chaparral 16, Del Sol 3 — At Chaparral, Laolagi tossed a three-hitter as the Cowboys defeated the Dragons in three innings.

Foothill 6, Basic 5 — At Bullhead City, Arizona, Jocelyn Shupp singled and scored the winning run in the top of the eighth inning to lift the Falcons by the Wolves.

Shupp started off the eighth with a single, stole second and came around on an error with one out in the inning.

Leah Becker went 3-for-4 with two runs, and Makenzie Andrews was 2-for-4 with a double and two RBIs for Foothill. Shupp went 2-for-2 with an RBI.

Cactus (Ariz.) 11, Foothill 2 — At Bullhead City, Arizona, the Cobras scored seven runs in the first inning and cruised by the Falcons in five innings.

Andrews was 1-for-2 with an RBI for Foothill.

Paige Sinicki was 1-for-3 with a double and two RBIs for Coronado.

Rio Rancho (N.M.) 7, Coronado 6 — At Bullhead City, Ariz., the Rams scored the winning run on a two-out bloop single in the bottom of the sixth to edge the Cougars.

Brianna Gallegos was 3-for-3 with a home run and a double for Rio Rancho.

Ashley Ward went 2-for-3 with a double and an RBI, and Sinicki was 1-for-3 with a home run and two runs for Coronado.