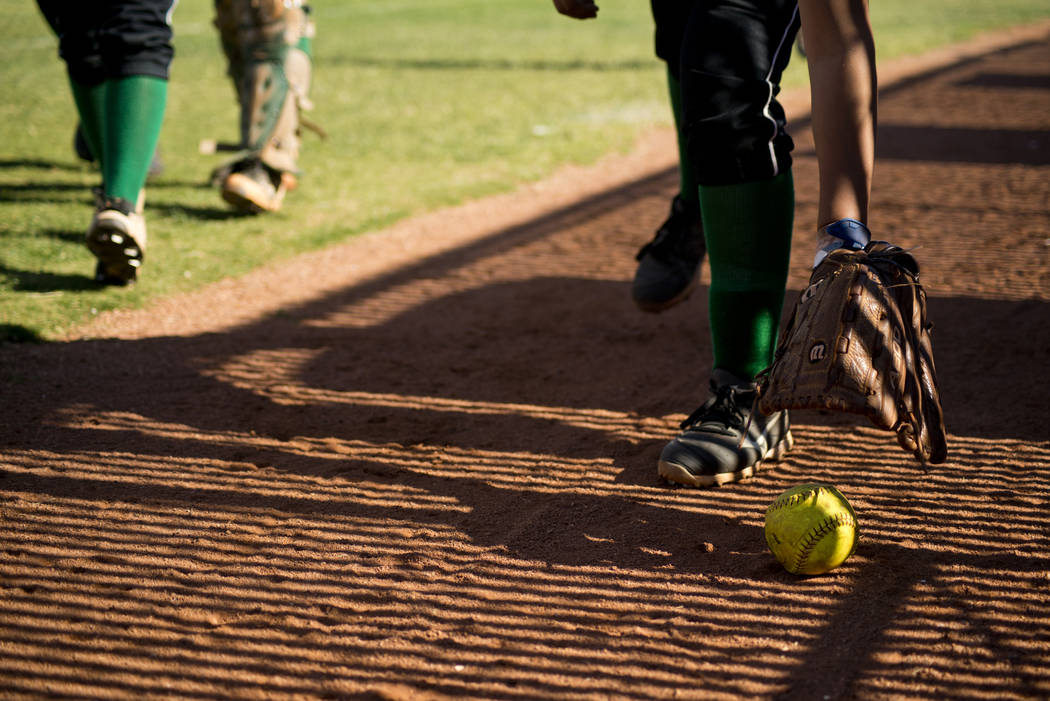 Jessica Meza singled home Kiana Young in the bottom of the eighth inning Wednesday to give Liberty’s softball team a 7-6 home win over Arbor View.

Meza also tripled and picked up the pitching victory.

McKenzie LaNeve singled, tripled and drove in a run, and Jenna Thomason drove in three runs with a single and a sacrifice fly for the Patriots.

Heather Scott added a triple, and Maddison Hamilton was 2-for-3 with an RBI for Liberty.

Rancho 15, Sierra Vista 7 — At Rancho, Taya Friderich went 2-for-5 with a double as the Rams defeated the Mountain Lions.

Sierra Crane was 2-for-2 with a double for Rancho. Mia Elicerio was 1-for-1 and drove in a run for the Rams.

Shadow Ridge 21, Spring Valley 1 — At Spring Valley, Caitlin Covington went 3-for-4 with a grand slam and six RBIs as the Mustangs routed the Grizzlies in three innings.

Shea Clements was 2-for-2 with a double, two runs and two RBIs for the Mustangs, who scored 12 runs in the first inning.

Jasmine Martin threw a one-hitter with six strikeouts to get the win.

Boulder City 19, Western 4 — At Boulder City, winning pitcher Abby Giunta went 3-for-4 with two doubles and three RBIs to help the Eagles to the four-inning win over the Warriors.

Giunta allowed one earned run on four hits in four innings to get the win. She struck out four and walked three.

Silverado 17, Eldorado 0 — At Silverado, Jessica Boothe went 2-for-2 with a double, a home run, four RBIs and three runs as the Skyhawks beat the Sundevils in three innings.

Mikayla Capers went 2-for-2 with a double, a triple, a run and three RBIs, and Megan Johnson was 2-for-2 with three runs and two RBIs for Silverado.

Meleah Rivera threw a three-hitter with three strikeouts to get the win.

Green Valley 15, Bonanza 0 — At Green Valley, Angelina Ortega went 3-for-3 with a double and three RBIs to lift the Gators over the Bengals in a four-inning game.

Abigail Cordova pitched three innings, striking out two and allowing one hit, to get the win.

Chaparral 19, Valley 4 — At Chaparral, winning pitcher Losa Laolagi went 3-for-3 with two doubles as the Cowboys beat the Vikings in three innings.

Fernanda Rivas and Tatiana Love each added a double for Chaparral.

Moapa Valley 15, Mojave 0 — At Overton, Kaitlyn Anderson was 4-for-4 with three doubles, six RBIs and four runs as the Pirates routed the Rattlers in four innings.

Barraza threw a two-hitter with six strikeouts and two walks to get the win.

Virgin Valley 17, Del Sol 5 — At Mesquite, the Bulldogs took advantage of 17 walks and routed the Dragons in five innings.

Taylor Ostrowski was 2-for-2 with two runs and two RBIs for Virgin Valley, which had only three hits.

Sunrise Mountain 24, Democracy Prep 9 — At Sunrise Mountain, Esmerelda Balbuena had a double and two RBIs and the Miners took advantage of 24 walks to rout the Blue Knights in three innings.

Emiley Rideout added a double and an RBI for Sunrise Mountain.

Veronica Linan-Martinez hit a triple, and Monica Marshall had a double for Democracy Prep.

Lake Mead had six hits but was helped by 14 walks.