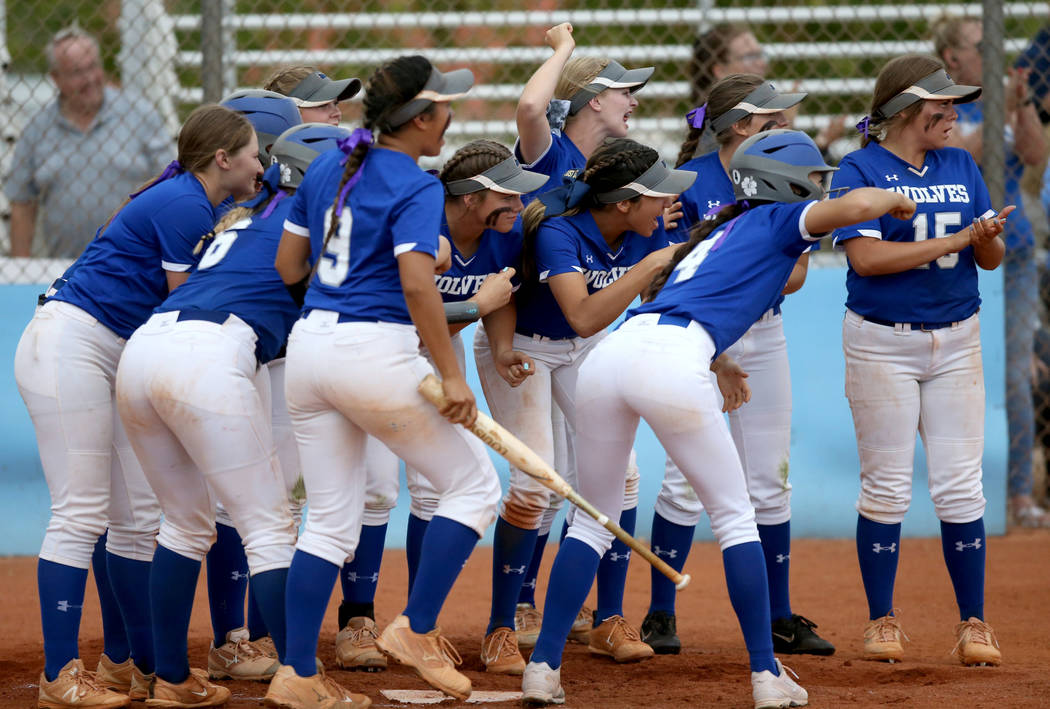 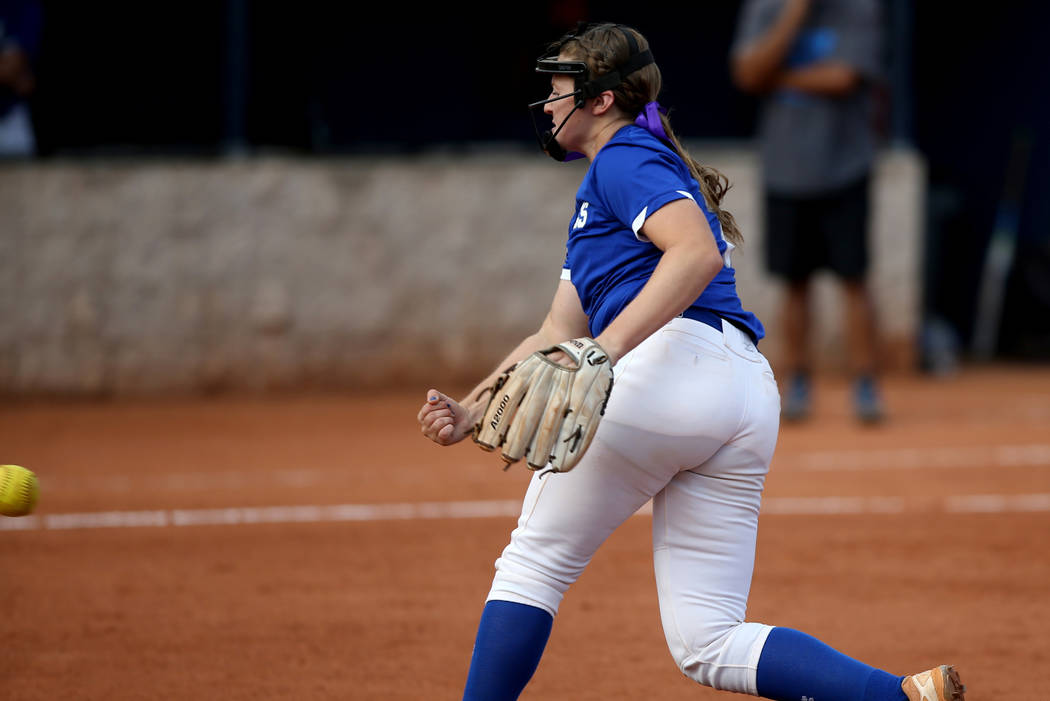 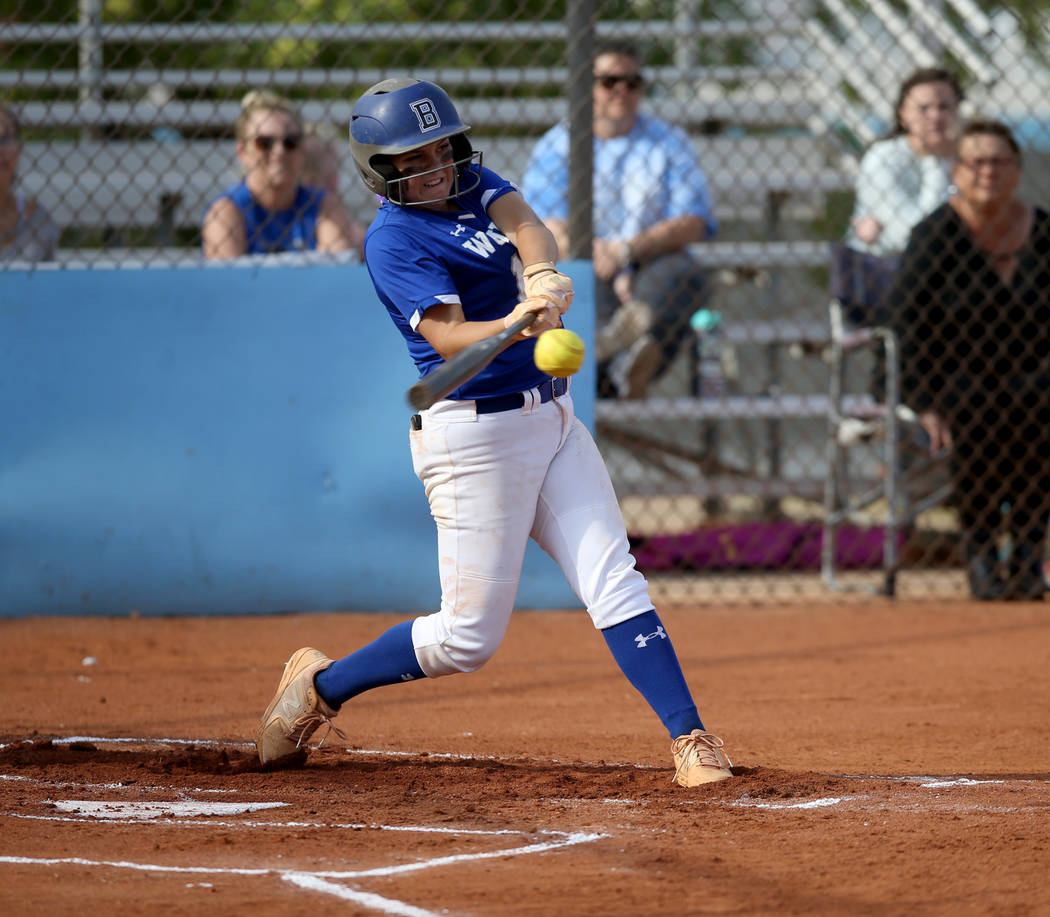 Basic’s Mikayla Berg (15) hits a three-run single in the first inning of their Desert Region semifinal softball game at Foothill High School in Henderson Thursday, May 9, 2019. Berg got on second base with an error. (K.M. Cannon/Las Vegas Review-Journal) @KMCannonPhoto 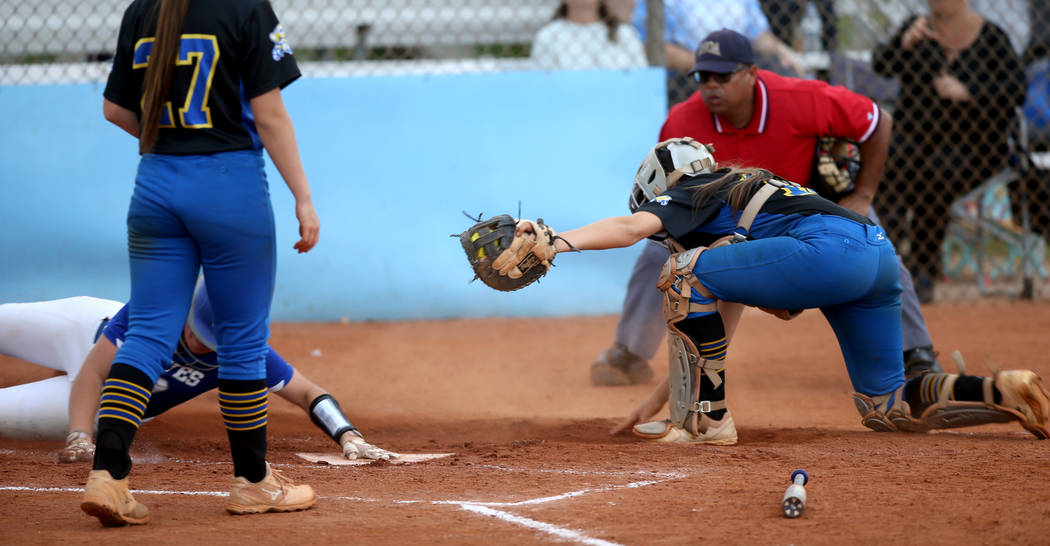 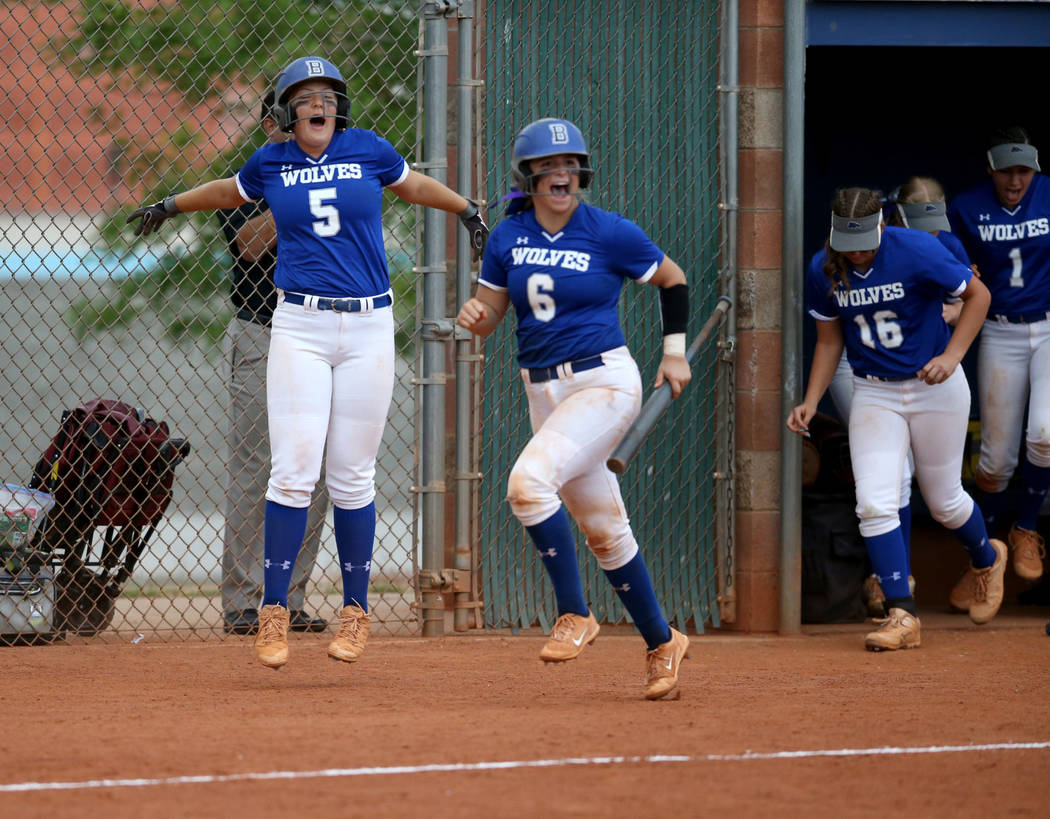 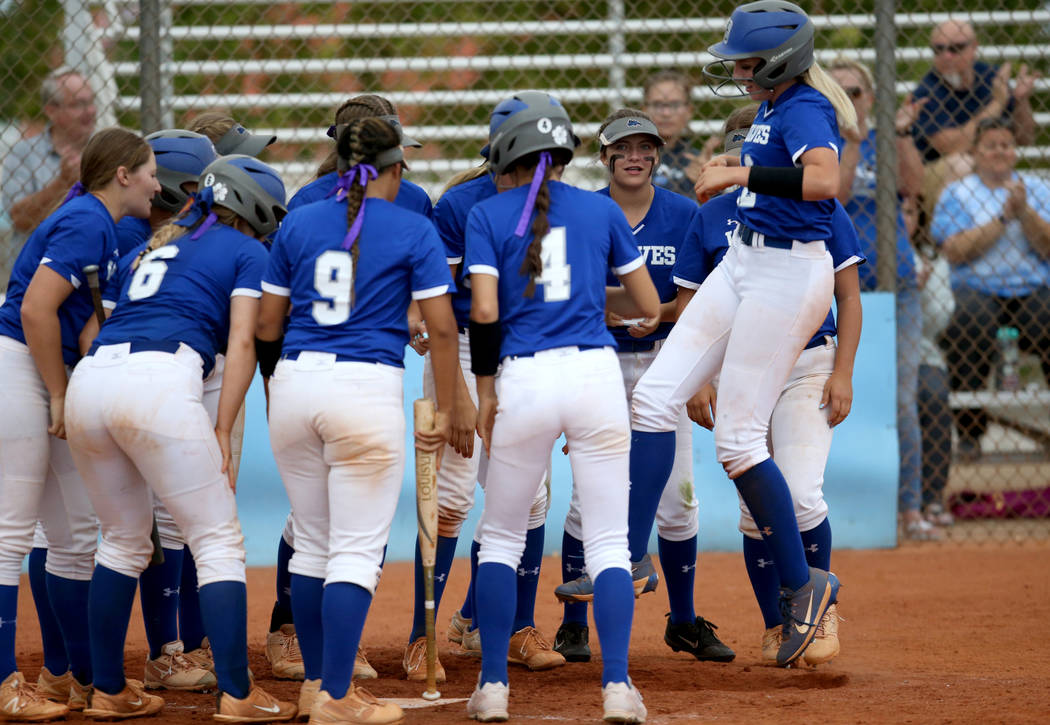 Graduation did a number on Basic’s softball team after it advanced to last year’s Class 4A state tournament.

But the Wolves returned their ace in the circle.

On Thursday, junior Shelby Basso made sure they would return to the state tournament.

Basso pitched a two-hit shutout with 11 strikeouts and contributed two hits, including a three-run double, in a five-inning 11-0 victory over Sierra Vista in the losers bracket final of the Desert Region tournament at Foothill.

Basic (28-8) meets Coronado (25-7) at 2 p.m. Friday at Foothill for the region championship. The Wolves must win twice to claim the title. Both teams qualify for next week’s state tournament.

“This is an incredible feeling, making state for the second year in a row,” said Basic coach Lauren Taylor, who had eight seniors last year. “After losing so many seniors a year ago, I just didn’t know what to expect. But these kids have worked very hard, and it’s been lots of fun along the way.”

Basso allowed a one-out single to Jessica Schneider in the first inning and a bunt single to Daelynn Hilton to open the fifth. She made 74 pitches.

“Shelby was simply methodical today,” Taylor said. “We wanted to keep her pitch count low to keep her as fresh as possible Friday. She took complete command from the beginning and never looked back.”

The Wolves made her job much easier by touching Schneider for four runs in the bottom of the first. Miki Berg singled with the bases loaded, and Berg scored on an error, her hit misplayed in the outfield.

Basic scored a run in the second on two hits and another error by Sierra Vista (22-13). It added five runs in the third inning, three on Basso’s double, for a 10-0 lead.

Freshman Sierra McClean capped the scoring with a home run to open the fourth. Basic had seven hits and drew seven walks.

“It was a total team effort,” Taylor said. “We came out focused and were ready to play.”

Sierra Vista 8, Liberty 6 — At Foothill, Daelynn Hilton was 2-for-2 with a home run and three RBIs to help the Mountain Lions down the Patriots.

Ryan Watkins was 1-for-3 with a home run and two RBIs, and Hola Rose Nakayama was 2-for-4 with two doubles and an RBI for Sierra Vista.

Alyssa Stanley belted a three-run home run in the first inning to lift Shadow Ridge to a 5-1 win over Arbor View in the losers’ bracket final of the Mountain Region Tournament.

Stanley also allowed just one run on five hits in 5 ⅔ innings for the Mustangs, who clinched a berth in the Class 4A state tournament and will face Centennial (32-4) in the region final at 2 p.m. Friday at Centennial.

Caitlin Covington was 1-for-2 with a double and an RBI for Shadow Ridge.

Arbor View 16, Faith Lutheran 1 — At Centennial, Hannah Hickstein was 2-for-3 with a double and four RBIs to help the Aggies eliminate the Crusaders in four innings.

Trinity Brandon was 3-for-4 with an RBI, and Paige Kellogg and winning pitcher Annie Finch each went 2-for-3 with two RBIs for Arbor View.

Allyson Rily went 2-for-4 with a double and three RBIs to help Pahrump Valley clinch a berth in the Class 3A state tournament and advance to the Southern Region final with a 10-2 win at Moapa Valley.

Skyler Lauver was 2-for-3 with a double and an RBI, and Deeanna Egan was 1-for-3 with a home run and two RBIs for Pahrump (26-9) which will host the region final at noon Saturday.

Mojave 13, Boulder City 9 — At Boulder City, Essence McRae’s two-run double capped a four-run eighth inning that lifted the Rattlers by the Eagles in an elimination game.

Ta’Nyia Zeno was 4-for-5 with three RBIs, and Hayli Greenberg was 3-for-5 with two RBIs for Mojave.

Chaparral 13, Virgin Valley 5 — At Chaparral, Losa Laolagi tossed a five-hitter with nine strikeouts to help power the Cowboys by the Bulldogs.

Fernanda Rivas was 2-for-3 with three RBIs, and A.J. Andrade was 2-for-4 with a double and an RBI for Chaparral.

Alex Covarrubias had an RBI single for Virgin Valley (13-17).

Kayla Rinehart’s triple with two outs in the bottom of the sixth inning plated Ellie Frehner with the go-ahead run as Lincoln County outlasted The Meadows, 10-9 in the opening round of the Class 2A Southern League playoffs at Mountain View.

Rinehart was 3-for-3 with two RBIs, and Macie Howard was 3-for-4 with a triple for Lincoln County, which will face Needles (18-5-2) in the winners’ bracket final at 2:30 p.m. Friday at Mountain View. Needles was a 14-2 winner over Laughlin.

Morgan Harris was 4-for-4 with two doubles, a triple, four runs and three RBIs to help the Panthers to a 20-5 win over Tonopah in four innings in the Class 1A Southern League Tournament at Indian Springs.

Rebecca Taylor was 2-for-4 with a double and three RBIs, and Taylor Higbee was 2-for-3 with three RBIs for Pahranagat Valley (22-2), which will face Indian Springs (10-13) in the winners’ bracket final at noon Friday at Indian Springs.

Indian Springs 22, Beaver Dam 7 — At Indian Springs, Faith Prine went 2-for-3 with four RBIs as the Thunderbirds routed the Diamondbacks in four innings.

Mariea Torneskog was 2-for-4 with a double and three RBIs, and Aubree Young, Breana Nichols and Brooke Karl all went 2-for-4 for Indian Springs.