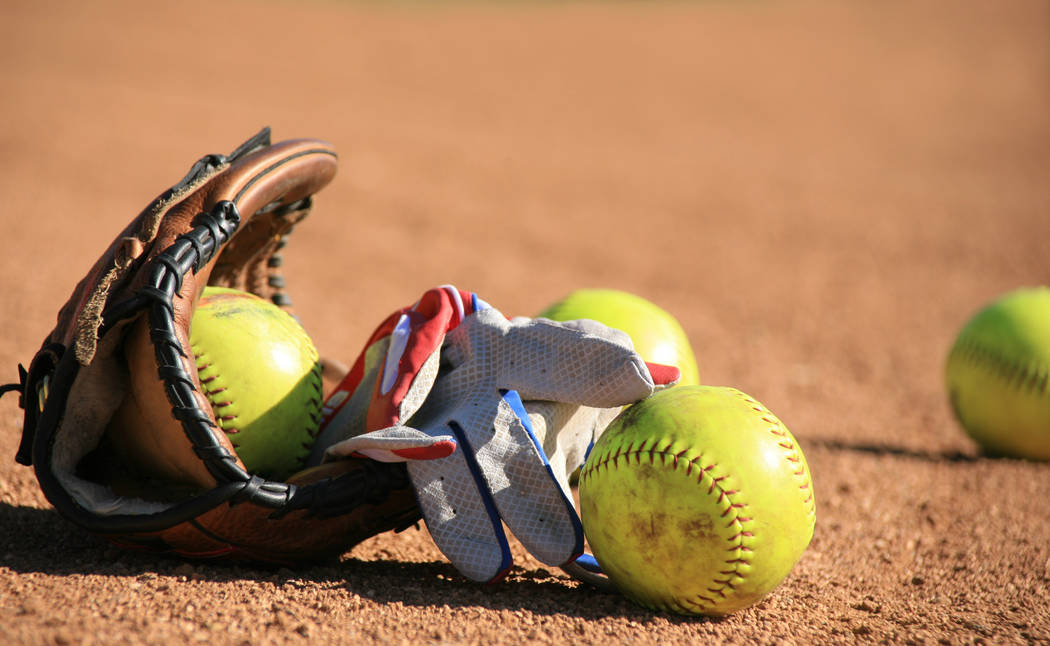 Even the rain waited for Shelby Basso on Tuesday.

Basic’s junior pitcher was in control from the start, tossing a six-hitter and striking out 10 to help the Wolves to a 7-1 home win over Liberty in the winners’ bracket semifinals of the Desert Region Tournament.

“I was able to keep the pace slow and control my part of the game,” Basso said. “Slowing things down is what was best for everyone today.”

Basic (27-7) will visit Coronado (24-7) in the winners’ bracket final at 4 p.m. Wednesday. That winner is guaranteed a spot in both the Desert Region final and next week’s Class 4A state tournament.

With skies threatening to open late in the game, Basso calmly worked around a one-out single in the seventh with two strikeouts and a ground out to reserve a spot in Wednesday’s winners’ final.

“The team comes out wanting to win every inning, every pitch, every at-bat,” Basso said.

Basso also started a four-run rally in the second inning by doubling to center field with one out. Jordyn Ebert followed with a two-run home run to right to give the Wolves all the runs they’d need.

Lauren Koshak scored on Sanoe Helenihi’s double later in the inning, and Helenihi came home on Anastasia Stevens’ sacrifice fly to right field to make it 4-0.

Stevens singled home another run in the fourth inning, and Jordan Stinett added a two-run homer in the fifth to give Basic plenty of breathing room.

The Wolves were playing with extra incentive Tuesday, the anniversary of the death of Helenihi’s mother.

“This is is one of the most family-driven teams I’ve had the privilege of coaching,” said Basic coach Lauren Taylor. “With it being the anniversary to the day of Helenihi’s mom’s passing, we had to bring that to the forefront but also stay focused on our goal.”

Ebert was 2-for-3 with two runs and two RBIs for Basic.

Coronado 10, Sierra Vista 0 — At Coronado, Ashley Ward fired a six-inning two-hitter with 14 strikeouts and smacked a two-run homer to lead the Cougars past the Mountain Lions in a winners’ bracket semifinal.

Kaila Angel went 3-for-3 with with a home run, triple, double, an RBI and three runs, and Katie Sullivan added a double and two RBIs for Coronado.

Bishop Gorman 13, Foothill 8 — At Foothill, Katelyn Hunter was 3-for-5 with two doubles and four RBIs, and the Gaels erupted for eight seventh-inning runs to eliminate the Falcons.

Mia Weckel was 3-for-5 with a double, and Ashley Kuckler was 3-for-4 with an RBI for Gorman.

Angelina Rodriguez was 3-for-4 with two RBIs, and Makenzie Andrews went 3-for-4 with a triple for Foothill (13-16).

Green Valley 12, Desert Oasis 8 — At Desert Oasis, Cinthia Garcia was 3-for-5 with three RBIs as the Gators held off the Diamondbacks in an elimination game.

Angelina Ortega was 3-for-4 with two RBIs, and Olivia McClain was 2-for-5 with two triples and an RBI for Green Valley.

Alyssa Stanley’s grand slam highlighted a six-run fifth inning that propelled host Shadow Ridge to an 11-7 win over Arbor View in a winners’ bracket semifinal of the Mountain Region Tournament.

Shea Clements was 2-for-2 with a home run and a double, and Hailey Morrow was 2-for-4 with an RBI for the Mustangs (24-1), who will visit top-seeded Centennial (31-4) in the winners’ bracket final at 4 p.m. Wednesday.

Centennial 10, Rancho 0 — At Centennial, Amanda Sink and Deanna Barrera combined on a six-inning no-hitter as the Bulldogs blanked the Rams in a winners’ bracket semifinal.

Palo Verde 24, Bonanza 3 — At Palo Verde, Alyssa Maillaro was 3-for-4 with three triples and five RBIs as the Panthers eliminated the Bengals in a three-inning game.

Camden Zahn was 3-for-4 with two RBIs, and Ridlee Tavisora went 2-for-3 with four RBIs for Palo Verde.

Faith Lutheran 13, Cimarron-Memorial 8 — At Faith Lutheran, winning pitcher Kalsey Kekahuna-Lopes was 4-for-4 with a home run, a double and two RBIs to help the Crusaders eliminate the Spartans.

Hannah Propst was 2-for-3 with two RBIs, and Ellie Fried was 2-for-4 for Faith Lutheran.

Reagan Wadsworth went 3-for-4 with three RBIs, and Tiarra Del Rosario was 3-for-4 with a triple and an RBI for Cimarron (12-11). Jordyn Ramos homered for the Spartans.

Emilie Barraza tossed a four-inning no-hitter and went 3-for-3 with two doubles and three RBIs to lead Moapa Valley’s softball team to a 15-0 win over visiting Valley on Tuesday in the opening round of the Class 3A Southern Region Tournament.

Abbie Evans was 2-for-4 with a double and four RBIs, and Kaitlyn Anderson and Terra Evans each went 2-for-3 with three RBIs for the Pirates (20-6), who will host Chaparral (16-7) in a winners’ bracket semifinal at 3:30 p.m. Wednesday.

Chaparral 16, Mojave 9 — At Mojave, Savanna Harper was 3-for-3 with an RBI to help the Cowboys down the Rattlers.

Winning pitcher Losa Laolagi was 3-for-4 with two doubles and an RBI for Chaparral.

Pahrump Valley 12, Virgin Valley 2 — At Pahrump, Terrena Martin went 3-for-3 to lead a 13-hit attack as the Trojans downed the Bulldogs in five innings.

Boulder City 15, Del Sol 0 — At Boulder City, Ryann Reese was 2-for-3 with a triple, three runs and an RBI to help the Eages down the Dragons in three innings.

Marleena Mills was 1-for-3 with a double and two RBIs for Boulder City.

Abby Giunta and Alyssa Bryant combined on a two-hitter for the Eagles.