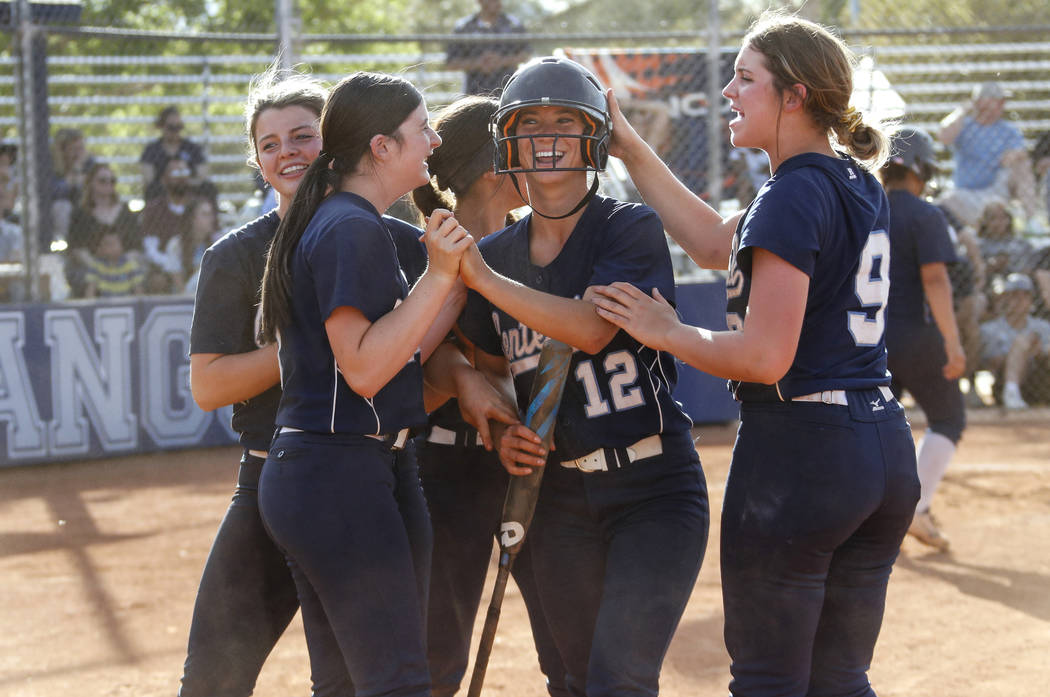 Centennial’s Abby Hanley (12) is congratulated by her teammates after scoring a run in the seventh inning of their softball game at Shadow Ridge High School in Las Vegas, Thursday, April 25, 2019. (Caroline Brehman/Las Vegas Review-Journal) @carolinebrehman 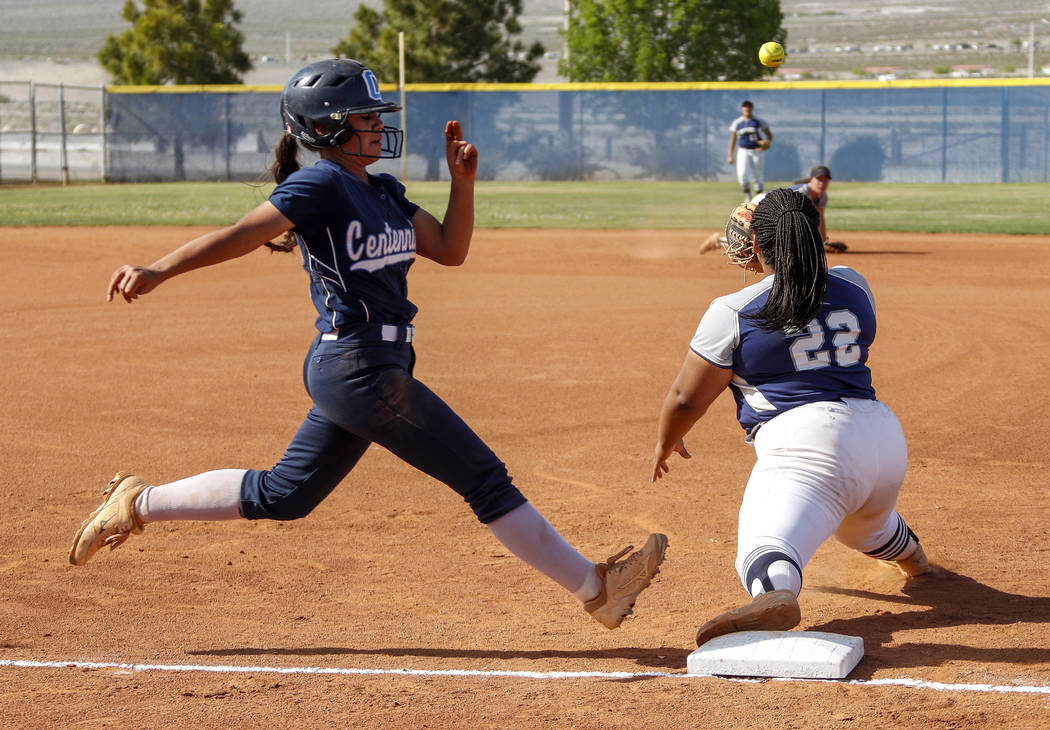 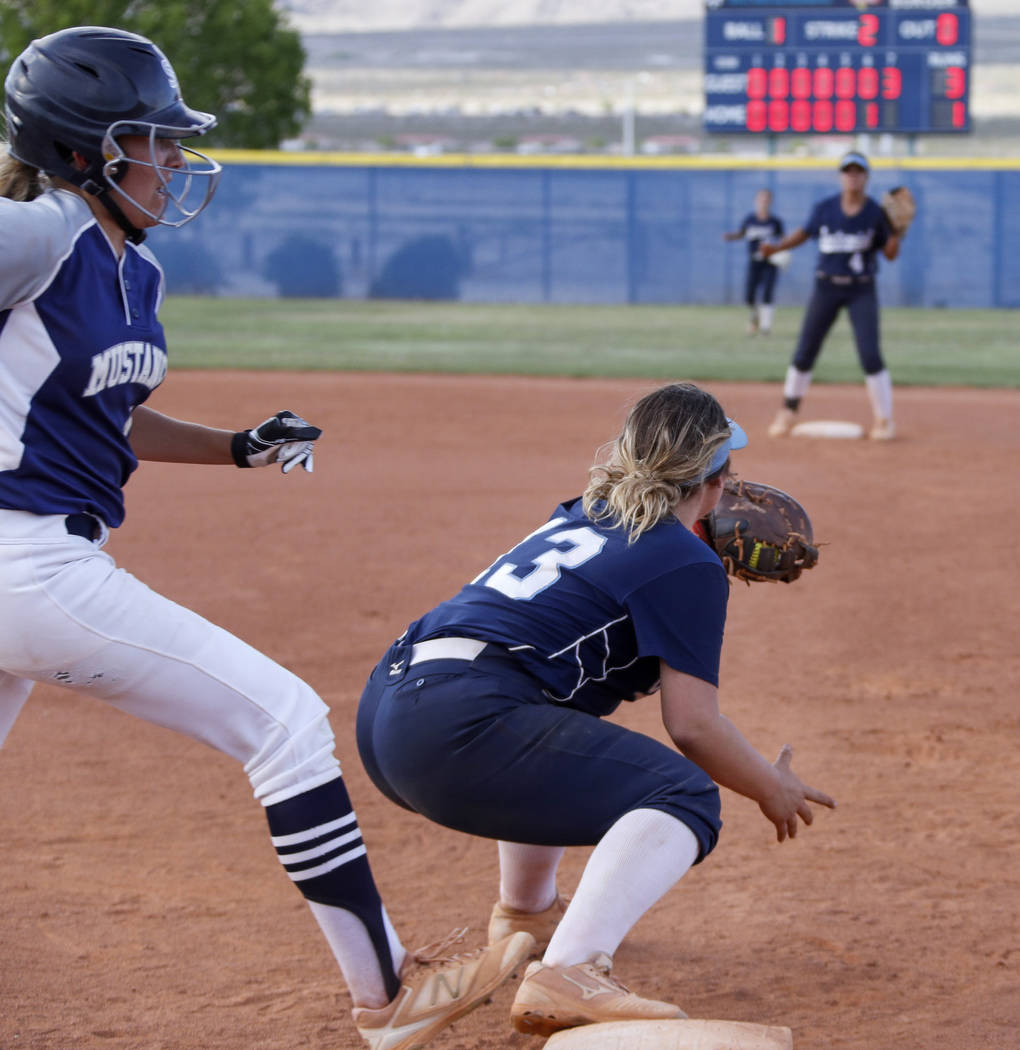 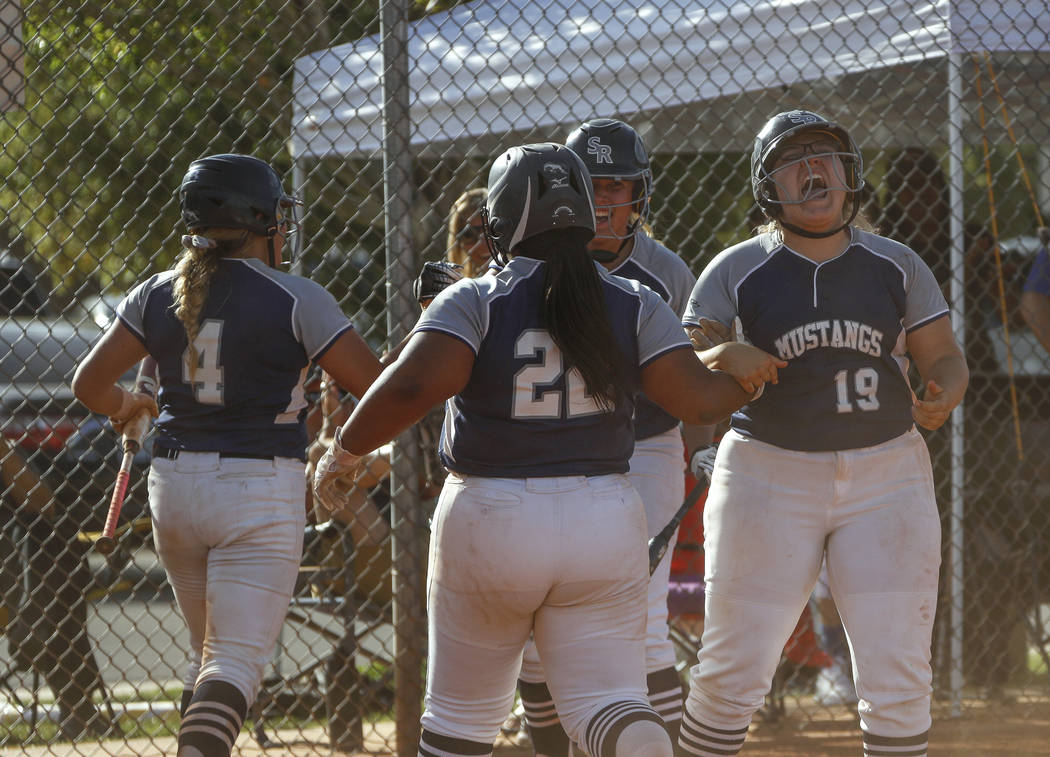 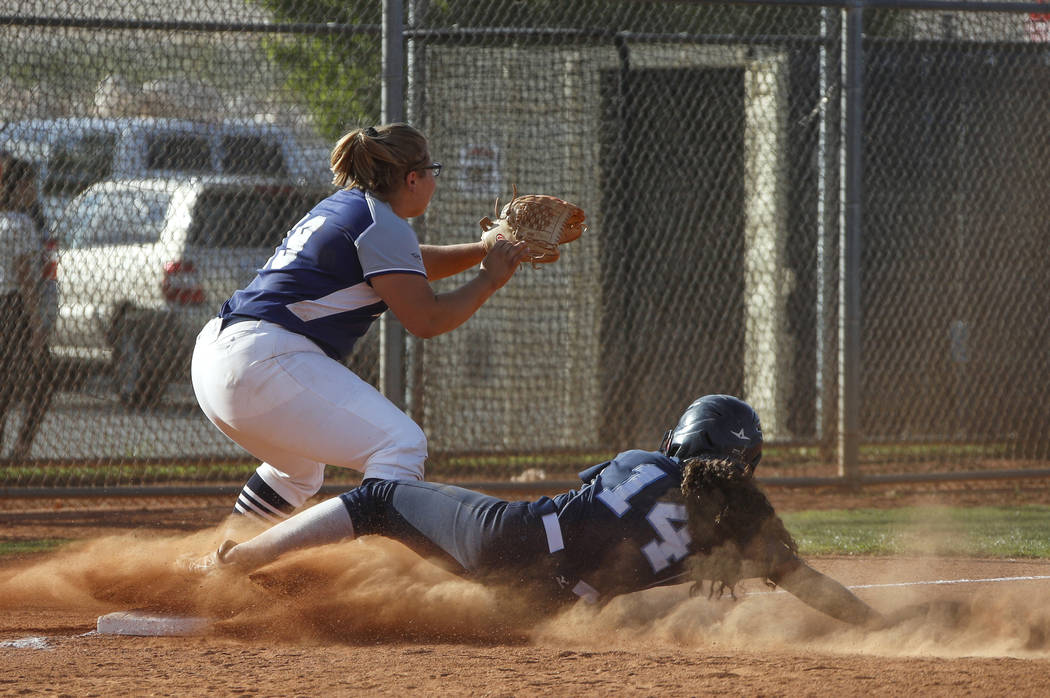 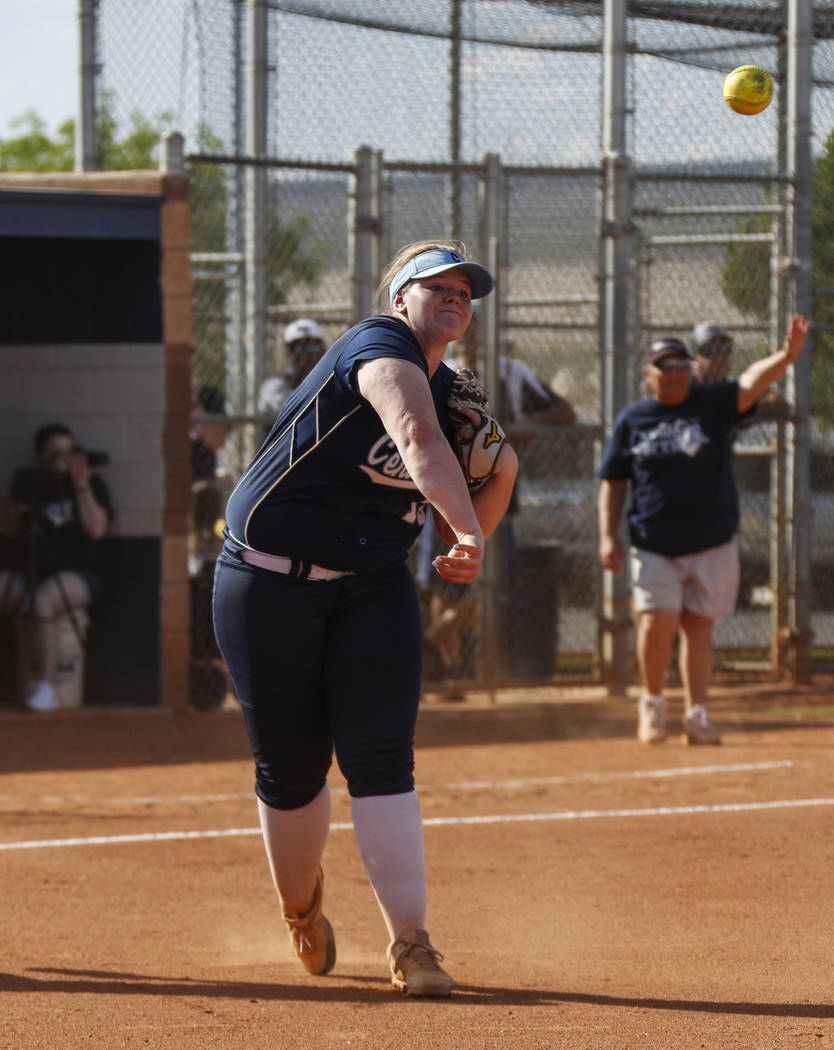 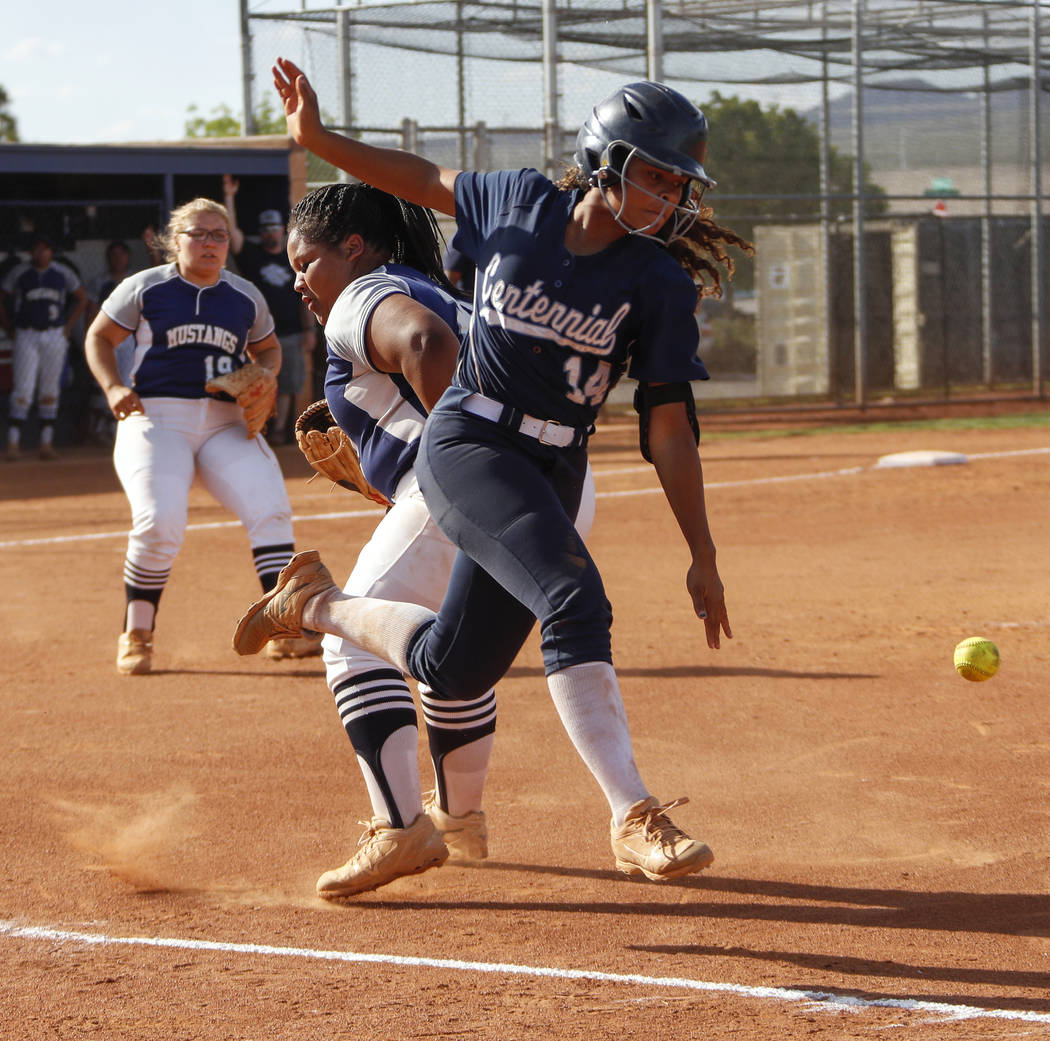 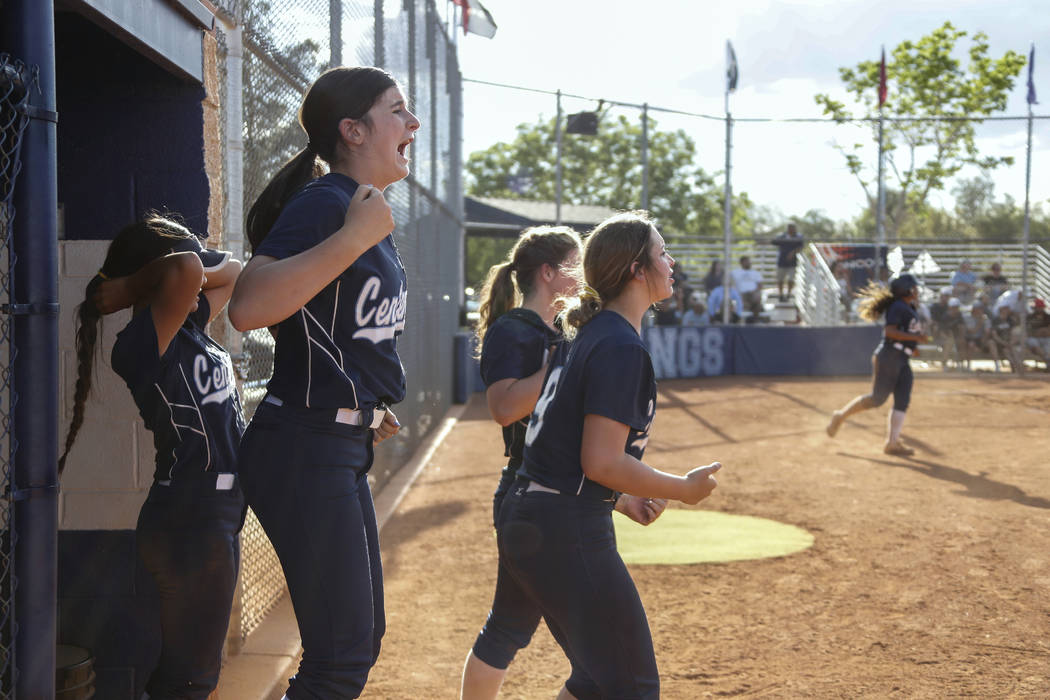 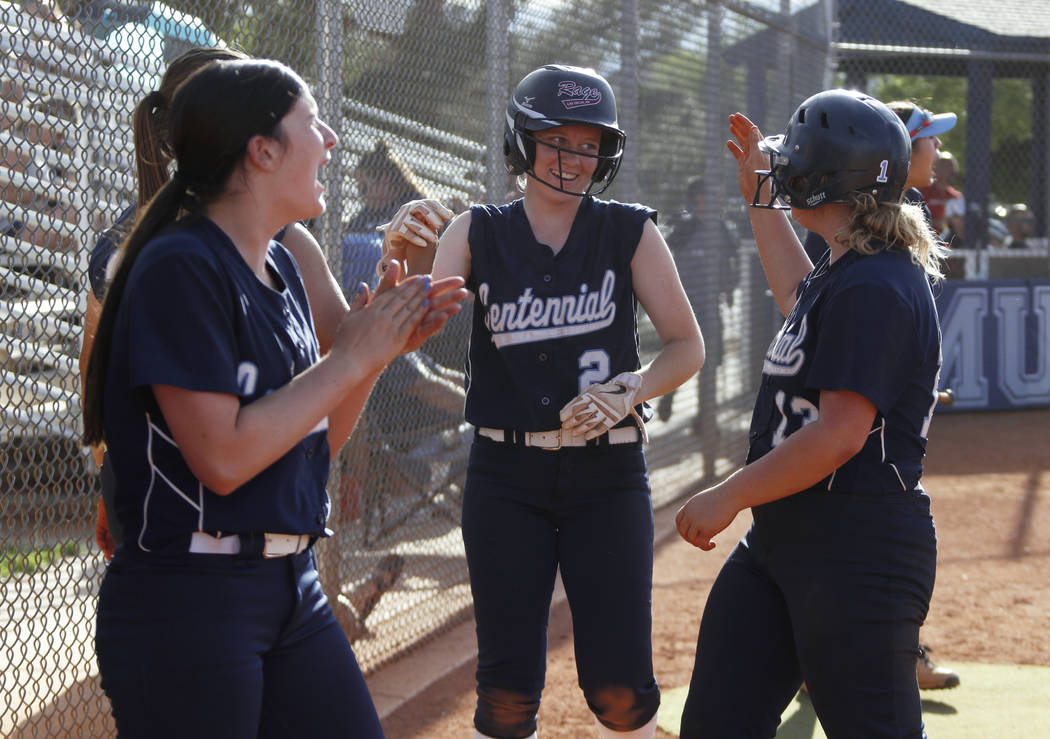 Centennial infielder Ryan Rogers (2) is cheered on by her teammates after scoring a run in the seventh inning of their softball game at Shadow Ridge High School in Las Vegas, Thursday, April 25, 2019. (Caroline Brehman/Las Vegas Review-Journal) @carolinebrehman

Shadow Ridge has been atop the softball rankings since the first preseason poll came out March 6. Centennial has been ranked No. 2 since March 13.

That may soon change.

A three-run seventh inning and a no-hitter by Weber State-bound Amanda Sink led Centennial to a 3-1 win Thursday at Shadow Ridge in the conclusion of a game interrupted by rain on March 20.

“You gotta embrace games like this,” Centennial assistant coach Sam Norris said. “You can’t get tight. It’s a difference between being loose and being focused, and I said just have fun and be focused and go out there and do what we are capable of doing.”

Norris filled in for coach Mike Livreri, who was ejected when a Centennial player used an illegal bat in the first inning more than a month ago.

The Mustangs finally broke a scoreless tie with a run in the bottom of the sixth, but the Bulldogs (24-4, 10-0 Mountain League) responded in the seventh.

With two outs, the Bulldogs got back-to-back RBI singles from Abby Hanley and Samantha Lawrence.

“We’ve done this all season, we’ve come back,” Kallfelz said. “We don’t let other teams’ excitement get to us.”

Sink, meanwhile, was masterful in mixing up her pitches to keep the Mustangs off balance.

“I was focused on coming in and playing hard, playing our game and coming to their field and just doing what we do — our best,” said Sink, who struck out nine.

Shadow Ridge (19-1, 9-1) got on the board in the sixth inning after Shea Clements walked, moved to second on Caitlin Covington’s deep fly to left field and came around to score from second on Alyssa Stanley’s sacrifice bunt.