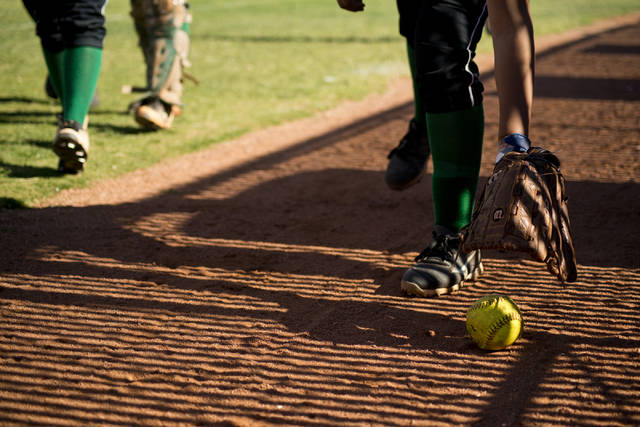 Taylor Okamura was 4-for-4 with three triples, a double and seven RBIs, and Coronado’s softball team routed visiting Green Valley 17-2 in four innings Friday to clinch the Class 4A Sunrise League title.

Sophia McCann went 2-for-3 with a double and three RBIs for Coronado.

Jalen Jones had a triple for Green Valley.

Rancho 2, Basic 1 — At Rancho, Sam Pochop allowed one run on four hits and struck out nine to lead the Rams past the Wolves.

Lili Gutierrez went 2-for-3 with two triples to lead the Rams at the plate. Pochop went 1-for-2 with a triple.

Sanoe Helenhi tripled and scored the only run for the Wolves.

Las Vegas 20, Valley 1 — At Valley, Kaitlyn Horstdaniel was 2-for-2 with a home run and two RBIs, and Sabrina Saldate was 4-for-5 with two doubles and two RBIs in the Wildcats’ five-inning win over the Vikings.

Angelina Visitacion was 3-for-4 with a double and an RBI and pitched three hitless innings with six strikeouts to earn the victory.

Gabriella Morales was 1-for-2 with a run-scoring double in the fourth for Valley.

Foothill 15, Eldorado 0 — At Foothill, Katelyn Enzweiler was 3-for-3 with two doubles and three RBIs, and Kayla King had two doubles and drove in three runs, as the Falcons routed the Sundevils in three innings.

Haleigh Olive and Jocelyn Shupp each had two hits and two RBIs, and Makenzie Andrews added two RBIs for Foothill.

Desert Oasis 16, Durango 1 — At Durango, Jaid Raval was 2-for-4 with two doubles, and the Diamondbacks scored eight runs in the top of the fifth to complete the three-game sweep of the Trailblazers.

Elsy Guzman was 2-for-4, and Jada Moreno added a triple for Desert Oasis.

Kaitlin Fazendin was 2-for-2 with a double, and Alexis Geraldo also had a double to lead Durango.

Lauren Alvarez’s double was the only hit for the Gaels.

Bonanza 15, Clark 0 — At Bonanza, Leilani Rose went 1-for-2 with a triple and three RBIs to lead the Bengals in a rout of the Chargers.

Sara Riley went 2-for-3 with two doubles and an RBI, and Samantha DeMattia went 2-for-2 with a double and two RBI for Bonanza.

McKenna Llano allowed three hits over three innings to pick up the win.

Boulder City 10, Legacy 0 — At Boulder City, Lily Osman homered and drove in three runs, and Raegan Herr had two RBIs in the Eagles’ five-inning win over the Longhorns.

Needles 14-19 Lake Mead 2-8 — At Needles, California, Kourtney Fletcher picked up two wins in the circle and finished with 12 total strikeouts to help the Mustangs sweep a doubleheader over the Eagles.

Josey White was 2-for-4 with a double and three RBIs to lead Lake Mead.

Indian Springs 16-18, Beaver Dam (Ariz.) 1-2 — At Indian Springs, Aspen Avery was 3-for-4 with a home run and five RBIs to help the Thunderbirds complete the doubleheader sweep of the Diamondbacks.

Sadie Heath and Kayla Noyes each had two RBIs, and Faith Prine doubled and drove in a run for Indian Springs.

In the first game, Prine was 2-for-3 with a triple and two RBIs, and Heath was 3-for-3 and drove in three runs for the Thunderbirds.

Avery homered and drove in three runs. She also struck out eight and allowed one hit to earn the victory.

Hailey Linfoot was 2-for-2 and scored three runs for Indian Springs.