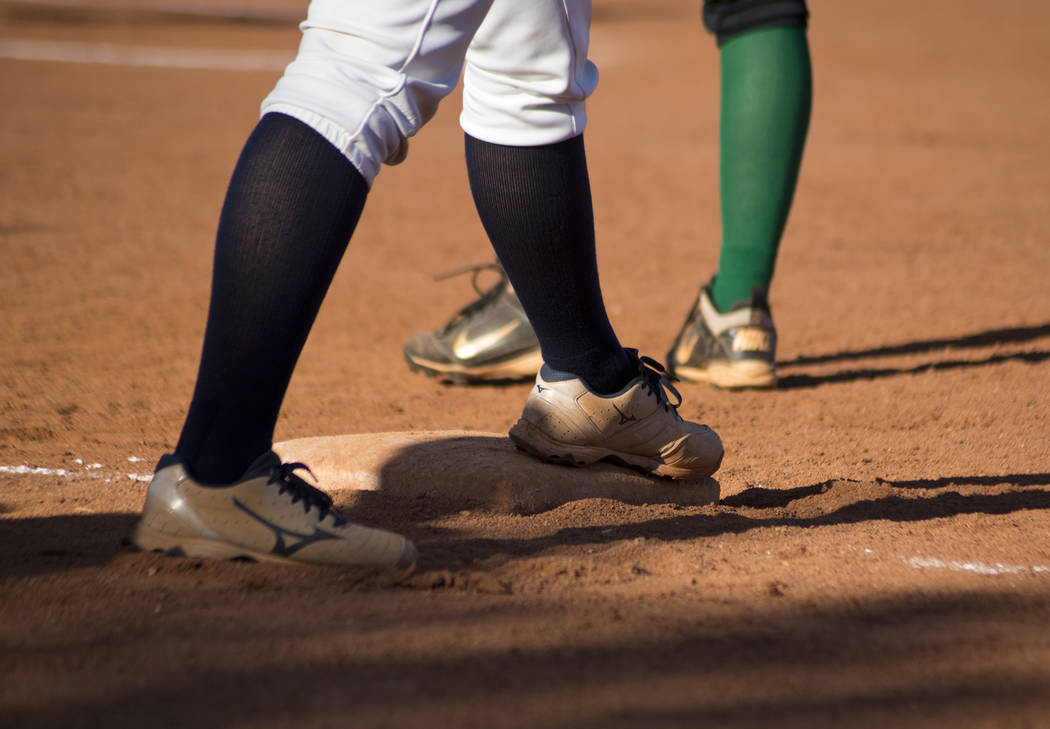 Giovanna Bojorquez went 4-for-5 with three runs and three RBIs to help Cheyenne’s softball team to an 11-9 win at Mojave on Tuesday.

Madelynn Kennedy earned the win in the circle with nine strikeouts for the Desert Shields, who scored five runs in the top of the fifth inning to take a 7-3 lead.

Emilee Mitton and Jessica Ortiz each had three hits and two RBIs to lead Mojave.

Sierra Vista 10, Durango 0 — At Sierra Vista, Kalei Watkins tossed a no-hitter with eight strikeouts and went 2-for-3 with two home runs and five RBIs to lead the Mountain Lions to a five-inning victory over the Trailblazers.

The victory clinched the Southwest League title for the Mountain Lions, their second in the last three seasons.

Watkins walked one batter in the third inning, and the Mountain Lions committed one error.

Rosalia Nakayama was 2-for-3 with a home run, and Jamie Kalaau-Sunia and Mia Buranamontri each tripled for Sierra Vista, which also got a double from Jessica Schneider.

Centennial 10, Faith Lutheran 0 — At Faith Lutheran, Amanda Sink tossed a one-hitter with 11 strikeouts in the Bulldogs’ five-inning win over the Crusaders.

Kiana Tate and Jillian Bartley each hit a homer and had two RBIs, and Skyler Ball was 3-for-3 with two runs and two RBIs. Makenzie Ball was 3-for-4 with an RBI for Centennial, which scored seven runs in the first inning.

Bishop Gorman 16, Spring Valley 0 — At Spring Valley, Reyna Martin was 3-for-4 with two triples, a double and two RBIs, and Hannah Gondini went 4-for-4 with a triple and three RBIs as the Gaels routed the Grizzlies in four innings.

Monique Passalacqua was 2-for-4 with a double and two RBIs, and winning pitcher Darian Pancirov supplied a double for Gorman, which scored nine runs in the first inning.

Desert Oasis 16, Bonanza 5 — At Desert Oasis, Elsy Guzman homered as part of seven extra-base hits in the Diamondbacks’ six-inning victory over the Bengals.

Izriah Hodson, Jaid Raval and Jazmyne Compehos each tripled for the Diamondbacks, and Meagan Anders, Scarlett Hurtado and Ruby Martinez all hit a double.

Evalynn Sandoval had a double and a triple for the Bengals, and Brooke Detommaso and Leilani Rios both went 3-for-3.

Shadow Ridge 17, Legacy 0 — At Legacy, Alisha Schultz went 2-for-4 with a triple, three runs and four RBIs, and the Mustangs scored 11 runs in the third inning to defeat the Longhorns in three innings.

Raelynn Kendall was 2-for-2 with a double and a triple, and Alyssa Stanley and and Mia Vogues each doubled and drove in two runs. Caitlyn Covington also tripled for Shadow Ridge.

Angel Ortiz and Jasmine Evers each singled for Legacy.

Liberty 16, Eldorado 0 — At Eldorado, Jessica Meza tossed a one-hitter with four strikeouts, and Brenna Alvarez went 3-for-3 with a triple, three runs and four RBIs to lead the Patriots’ to a three-inning win over the Sundevils.

Ashleigh Rodriguez and Shelby Carvalho each tripled for the Patriots.

Kristie Thomas had the lone hit for Eldorado.

Palo Verde 11, Cimarron-Memorial 0 — At Cimarron, Taylor Askland tossed a three-hitter with five strikeouts, and Ally Snelling had three hits and seven RBIs in the Panthers’ five-inning win over the Spartans.

Pahranagat Valley 17, Mountain View 1 — At Mountain View, Kyla Shumway went 2-for-2 with two doubles, two runs and four RBIs to lead the Panthers to a four-inning win over the Saints.

Ashlynn Wadsworth was 2-for-3 with a double and three runs, and Hannah Castleton was 2-for-2 with a double. Kaitlyn Davis added a double for Pahranagat Valley, which led 11-0 after two innings.

Indian Springs 18, Sandy Valley 3 — At Indian Springs, Faith Prine hit a grand slam and scored three runs to lift the Thunderbirds to a three-inning win over the Sidewinders.

Lake Mead 15, Calvary Chapel 0 — At Lake Mead, Lauryn Freund tossed a two-hitter with seven strikeouts, and Josey White went 3-for-3 with a double, two triples and four RBIs as the Eagles routed the Lions in four innings.

Freund also went 2-for-3 with three runs and four RBIs, and Jacea Tillman was 3-for-3 with two runs and two RBIs for Lake Mead.

Laughlin 16-20, Agassi Prep 1-12 — At Agassi Prep, the Cougars swept a doubleheader from the Stars.