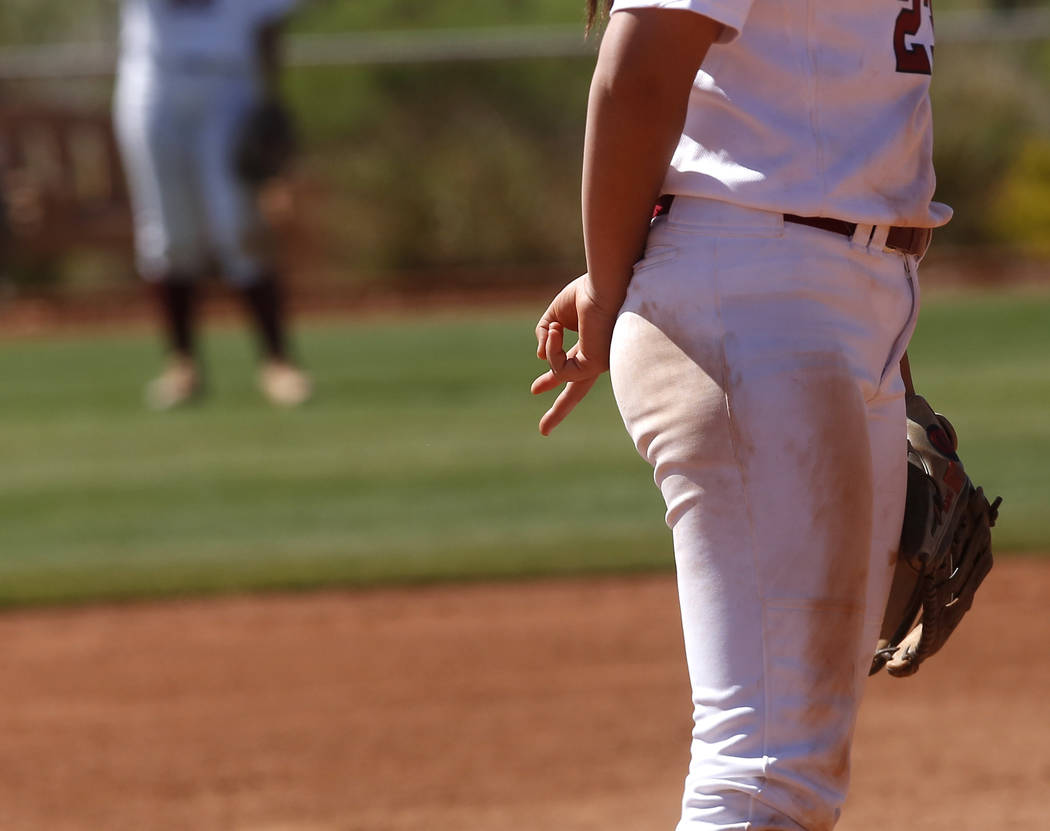 Losi Brown went 4-for-4 with a double and three RBIs and tossed a complete game, as Chaparral’s softball team beat visiting Boulder City 8-3 on Thursday, handing the Eagles their first Class 3A Sunrise League loss.

Brown had a run-scoring double in the third inning when the Cowboys scored four runs to go ahead 6-1. She scattered nine hits and struck out five to earn the victory in the circle.

Berenise Ibanez was 2-for-3 with an RBI, and Brandi Vara was 2-for-4 with two runs scored for Chaparral.

Lily Osman was 3-for-4 with a solo home run to lead Boulder City.

Jerra Hinson was 2-for-4 with a run scored, and Micayla Gegen was 1-for-3 with an RBI for the Eagles.

Coronado 3, Basic 0 — At Basic, Taylor Okamura hit a three-run double with two outs in the top of the sixth inning to lift the Cougars over the Wolves.

Coronado’s Tatum Spangler fired a two-hitter with 11 strikeouts to earn the victory.

Green Valley 7, Silverado 4 — At Green Valley, Cinthia Garcia went 2-for-4 with a triple, and the Gators overcame an early 3-0 deficit to get past the Skyhawks.

Katrina Ramos allowed one run over 4⅔ innings to pick up the win. Garcia, who pitched 1⅓ innings to start the game, returned to pitch the seventh to secure the win.

Dalyse Whiteside tripled and drove in a run for Silverado, and teammate Megan Johnson doubled.

Rancho 13, Eldorado 3 — At Eldorado, Sam Pochop went 2-for-2 with two runs and two RBIs to help the Rams to the five-inning win over the Sundevils.

Lili Gutierrez was 2-for-4 with a triple, two runs and an RBI, and Kaitlyn Suarez scored four runs for the Rams.

Gianna Carosone and Yvette Sanchez each had two RBIs for Rancho.

Adriana Romerowas 2-for-3 with a run for Eldorado.

Liberty 15, Valley 0 — At Liberty, Kylie Hefley went 3-for-3 with three RBIs to help the Patriots rout the Vikings in three innings.

Marisa Olmos tripled with a pair of RBIs for the Patriots, and Breanna Alvarez doubled and had three RBIs.

Ashleigh Rodriguez went 2-for-2 for Liberty.

Las Vegas 17, Canyon Springs 0 — At Las Vegas High, Kaitlyn Horstdaniel was 3-for-3 with two RBIs, as the Wildcats routed the Pioneers in three innings.

Skylar Gorrell and Angelina Visitacion each had two hits and an RBI for Las Vegas.

Arbor View 8, Cimarron-Memorial 5 — At Cimarron, Bryce Henricksen was 3-for-4 with a double, triple and two RBIs, and Kayla Rutledge drove in two runs to help the Aggies beat the Spartans.

Alexis Presser was 3-for-3 with two runs, and Taylor Beaman was 2-for-3 with a double and an RBI for Arbor View.

Palo Verde 15, Legacy 0 — At Legacy, Cara Beatty was 2-for-2 with two runs and four RBIs to help the Panthers to the three-inning win over the Longhorns.

Makall Whetten was 1-for-1 with two runs and two RBIs for Palo Verde, which scored 10 runs in the first inning.

Jessica Hopkins pitched a two-hitter with five strikeouts to get the win.

Tech 10, Del Sol 0 — At Tech, Gizele Cascos threw a one-hitter with seven strikeouts, and the Roadrunners defeated the Dragons in five innings.

Avery Rayos was 2-for-4 with a double for Tech.

Kassandra Lopez went 1-for-2 with a double to lead Del Sol.

Moapa Valley 12, Virgin Valley 2 — At Overton, Kessa Evans and Sierra Staheli each went 2-for-3 with a double and two RBIs to lead the Pirates to a five-inning win against the Bulldogs.

Kaitlyn Anderson also went 2-for-3 with two RBIs for the Pirates.

Emilie Barraza allowed two runs on six hits to pick up the win.

Savannah Price had a two-run double to lead the Bulldogs.

The Meadows 15, Calvary Chapel 5 — At The Meadows, Hillary Giang had four hits, and Hallie Monkarsh and Brooke Sparks each drove in two runs to lead the Mustangs to the five-inning win over the Lions.