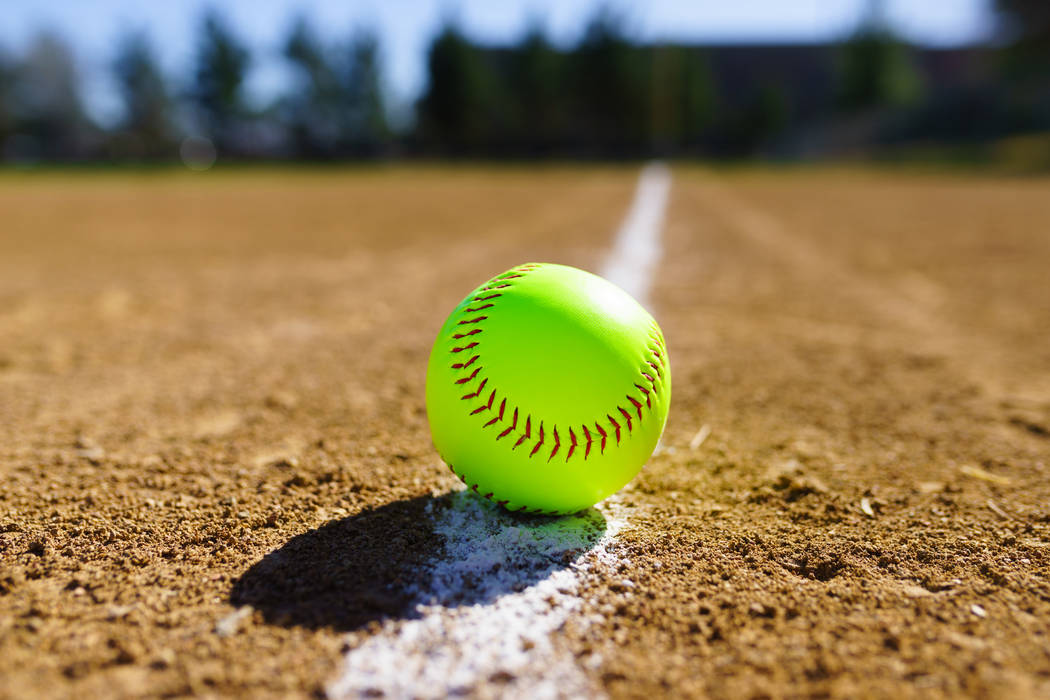 Foothill scored six runs in the top of the sixth and tied the game at 14 in the seventh on a two-run double by Caitlyn Stevenson.

McClain singled with one out and advanced to second on a groundout before Hilton’s double.

Jalen Jones was 2-for-4 with a home run and three RBIs, and Gennie Simington was 3-for-4 with a double to lead the Gators.

Sadie Christian was 3-for-4 with a double and three RBIs, and Skyler Glaude and Jocelyn Shupp each drove in two runs for the Falcons.

Coronado 11, Las Vegas 1 — At Las Vegas, Tatum Spangler scattered six hits over seven innings with eight strikeouts, and Ashley Ward went 2-for-5 with a double and two RBIs to help the Cougars top the Wildcats.

Taylor Okamura added two hits and an RBI for Coronado, which broke a scoreless tie with two runs in the fourth and four in the fifth.

Basic 11, Eldorado 5 — At Basic, Izabelle Morales earned the victory with four innings of relief and went 2-for-3 with an RBI to power the Wolves over the Sundevils.

Mariana Maldonado was 3-for-4, and Heather Holman went 2-for-3 with an RBI for the Sundevils.

Silverado 22, Canyon Springs 0 — At Canyon Springs, Mary Dungey was a single shy of hitting for the cycle with four RBIs and four runs, and the Skyhawks scored 15 runs in the first inning to down the Pioneers in three innings.

Megan Johnson went 4-for-4 with two RBIs and four runs for Silverado, which got two doubles and three RBIs from winning pitcher Alezandria Guariglia.

Jordan Baca and Cerrah Vann each had a walk to pace Canyon Springs.

Faith Lutheran 5, Arbor View 4 — At Faith Lutheran, Clara Heislen doubled to lead off the bottom of the ninth inning and scored on an error two batters later to lift the Crusaders past the Aggies.

Heislen was 4-for-5 with two runs and an RBI, and Ellie Fried was 3-for-5 with a run for Faith Lutheran, which trailed 4-0 after two innings.

Sophie Foster was 2-for-5 with an RBI, and Haley Hines drove in a run for the Crusaders.

Taylor Thomas was 1-for-2 with a solo home run in the first to lead Arbor View.

Bryce Henricksen was 2-for-4, and Hannah Hickstein was 2-for-5 for the Aggies.

Palo Verde 4, Centennial 3 — At Centennial, Ally Snelling had three hits and an RBI, and Jessica Nimmo drove in a run in the Panthers’ victory over the Bulldogs.

Cara Beatty and Grace Chavez each had two hits for Palo Verde, which scored single runs in the sixth and seventh innings to break a 2-2 tie.

Seanna Simpson was 1-for-3 with two RBIs to lead Centennial.

Cimarron-Memorial 12, Legacy 4 — At Legacy, Tiarra Del Rosario was 2-for-5 with a double and two RBIs and pitched four innings to earn win in the Spartans’ victory over the Longhorns.

Mya’Leah Bathea and Alyssa Karpinski each went 2-for-4 with an RBI, and Skylar Smith drove in two runs for Cimarron, which capitalized on seven errors by the Longhorns.

Clarissa Lona was 2-for-2 with an RBI to lead Legacy.

Angel Ortiz was 2-for-4 with an RBI, and Amber Radde added two hits for the Longhorns.

Desert Oasis 18, Spring Valley 3 — At Desert Oasis, Meaghan McInerney went 2-for-2 with a double, and the Diamondbacks scored 14 runs in the second to rout the Grizzlies in four innings.

Izriah Hodson and Elsy Guzman each went 2-for-3 with a double, and Makayla Rickard added a double for Desert Oasis.

Bishop Gorman 20, Clark 2 — At Clark, the Gaels took advantage of multiple walks to score 17 runs in the first en route to an easy win over the Chargers in three innings.

Durango 10, Bonanza 2 — At Bonanza, Madison Boyce threw a complete game in the Trailblazers’ victory over the Bengals.

Trinity Valentine, Destiny Cisneros and Madisyn Conriquez each doubled for the Trailblazers.

Boulder City 16, Moapa Valley 0 — At Overton, Bailey Bennett-Jordan tossed a four-hitter with 10 strikeouts and went 2-for-4 with a home run and four RBIs, leading the Eagles to a five-inning shutout of the Pirates.

Ashley Wishard was 3-for-4 with a two-run homer, and Jordan Moorhead was 2-for-3 with a double for Boulder City, which exploded for 12 runs in the fifth inning.

Marleena Mills was 2-for-4 with two RBIs and Micayla Gegen was 2-for-3 for the Eagles.

Chaparral 6, Del Sol 1 — At Chaparral, Losi Brown scattered five hits over seven innings with eight strikeouts, and batterymate Alexis Montoya went 2-for-3 with a double and an RBI as the Cowboys beat the Dragons.

Brandi Vera hit a double, and Sierra Shaw provided two hits for Chaparral, which trailed 1-0 but rallied with three runs in the fourth inning.

Sierra Vista 17, Desert Pines 0 — At Sierra Vista, Mia Buranamontri went 2-for-2 with a grand slam and six RBIs in the Mountain Lions’ three-inning win over the Jaguars.

Jessica Schneider had a triple and three RBIs and also threw one inning to combine on a no-hitter with Kalei Watkins.

Daelynn Hilton and Rosalia Nakayama each drove in two runs for Sierra Vista.