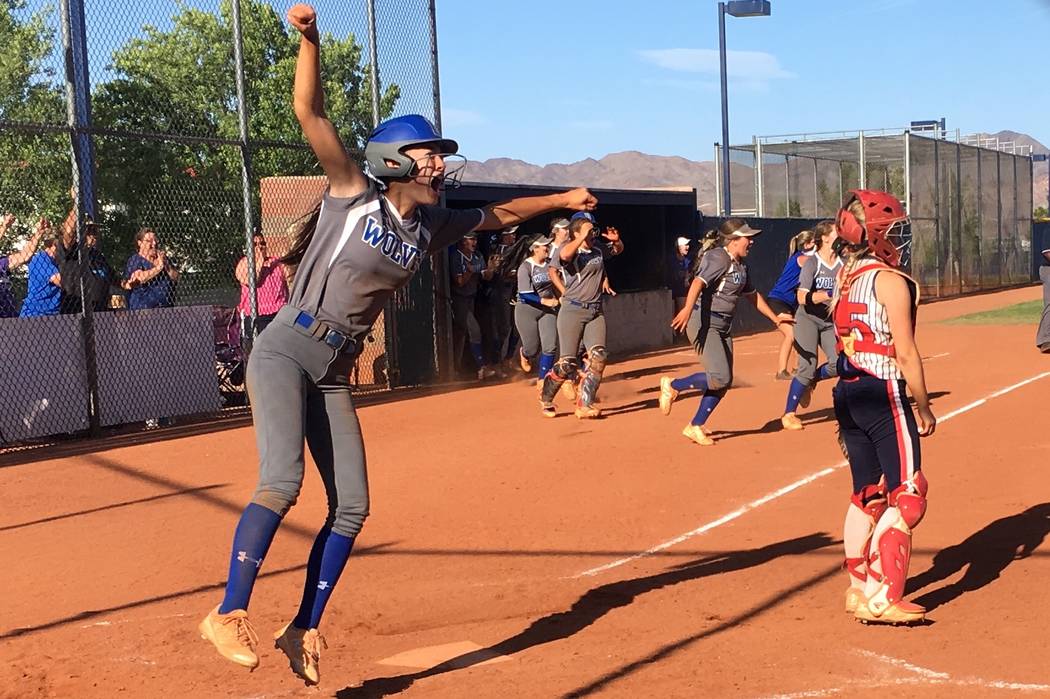 It was Monday, the day before her Basic softball team was set to begin the Sunrise Region tournament, when Sanoe Helenihi got the news.

Her mother, Ruth Naupaka Helenihi, had died of pancreatic cancer.

“With the season happening, they didn’t really want Sanoe to be mentally all jarred because they know that this was her happy place and this is what makes her sane,” Basic coach Lauren Taylor said. “We gave her the day off on Monday, and she came in on Tuesday.

Helenihi homered Tuesday in her first game back and couldn’t hold in the tears rounding the bases. Then Friday at Foothill, in an elimination game, Helenihi had a pair of hits and scored twice.

Throw in Hannah Barr’s walk-off single that gave the Wolves a 4-3 win against Liberty, and a week that started in deep sorrow ended with Helenihi in her happy place — with her team, which reached its first region final in school history.

“Each day it’s getting harder and harder just knowing my mom is gone,” Helenihi said. “I know when I step out on the field, all I think about is winning the game for her because I know she loves watching me play.

“She’s looking down, and she’s going to be there for me no matter what.”

rest in paradise mommy💔😞cancer hit you so suddenly, but now you should be happy, no more pain, no more stress, only happiness. you’ll be missed but never forgotten. i love you mom😔❤️
june 10, 1965 – may 7, 2018

Basic (24-11) will play Coronado (26-8) at noon Saturday at Bishop Gorman, needing to beat the Cougars twice to win the title.

Friday’s game did not start so well for the Wolves. Morgan LaNeve put the Patriots (22-9) up 3-0 just four pitches into the game after clubbing a three-run shot to left. Basic got one back in the bottom of the first, then saw Liberty pitcher Soraya Seumalo settle into a groove, retiring 12 in a row at one point.

Helenihi ended that streak with a sixth-inning single, and Alyssa Ferguson tied the game three batters later on a two-out triple. In the seventh, Lauren Koshak led the Wolves off with a double, then after a bunt and a walk, Barr came to the plate.

Barr, who had struck out twice to that point and was pinch-hit for earlier in the day, poked one over the first baseman’s head to end it.

“It was a confidence booster, yeah definitely,” Barr said. “I knew if I wasn’t going to be the one to do it, somebody else was going to have to step up, and it just so happened to be me.”

Basic and Coronado split their regular season meetings, with each game decided by one run.The Wolves know that the league winners and defending region champs will be a tough task, but they don’t seem to mind.

“We’re that team that nobody thinks can do it, and we’ve stepped up this year,” Barr said. “We’re going to shake up the town a little bit.”

Basic 7, Green Valley 3 — The Wolves scored five runs in the fifth inning to rally and eliminate the Gators in the losers’ bracket semifinal.

Basic trailed 3-0 in the fourth, but scored one before five straight spots in the order scored in the fifth, capped by a two-out double from Shelby Basso.

Basso entered the circle in the second and pitched 5⅔ innings to earn the win.

Sanoe Helenihi was 3-for-4 with a run and an RBI for the Wolves, and Jordan Stinnett hit a double. Basic’s Angela Santillanes and Mikayla Berg each had a run and an RBI.

Katrina Ramos and Savannah Fabro each doubled for the Gators.

Green Valley 10, Rancho 9 — Tyre Hilton delivered a walk-off single in the bottom of the 13th inning to score Hannah Mearideth and give the Gators a win over the Rams.

The came was completed Friday at Foothill after it was suspended in the 12th inning because of darkness Thursday at Green Valley.

Savannah Fabro doubled and scored four times for the Gators, and Katrina Ramos pitched seven innings of relief and allowed one run.

Rancho took the lead in the top of the 12th on an RBI single by Ayanna Potter. Mackenzie Perry threw the final nine innings for the Rams.

Liliana Gutierrez was 4-for-7 with a home run and two doubles for the Rams, and Potter hit a double.