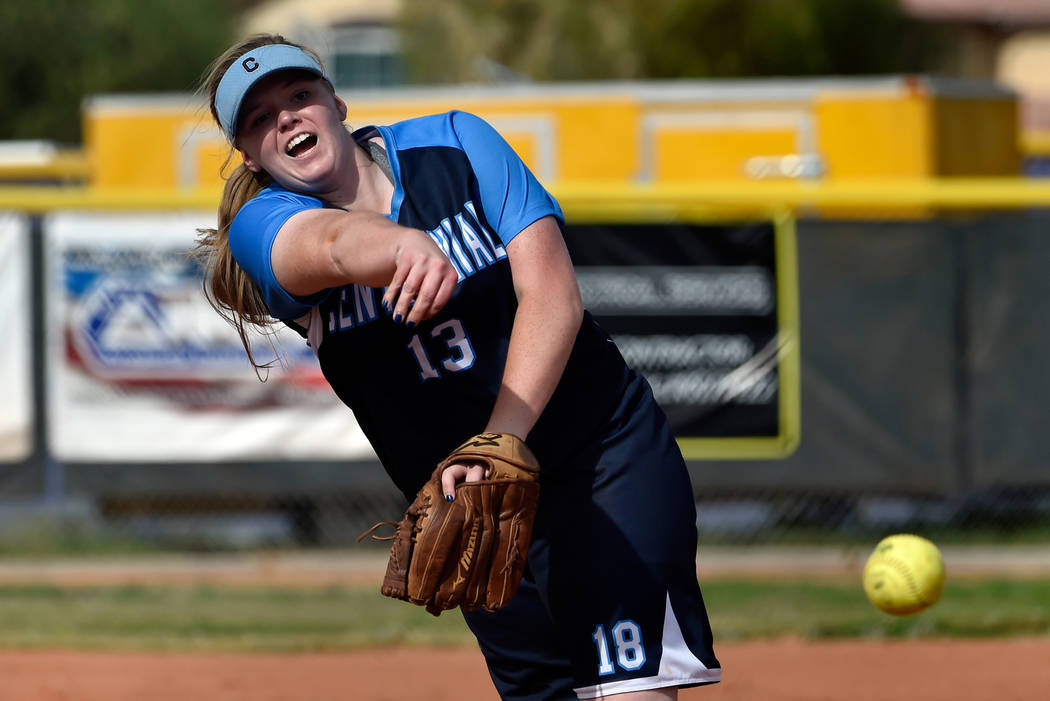 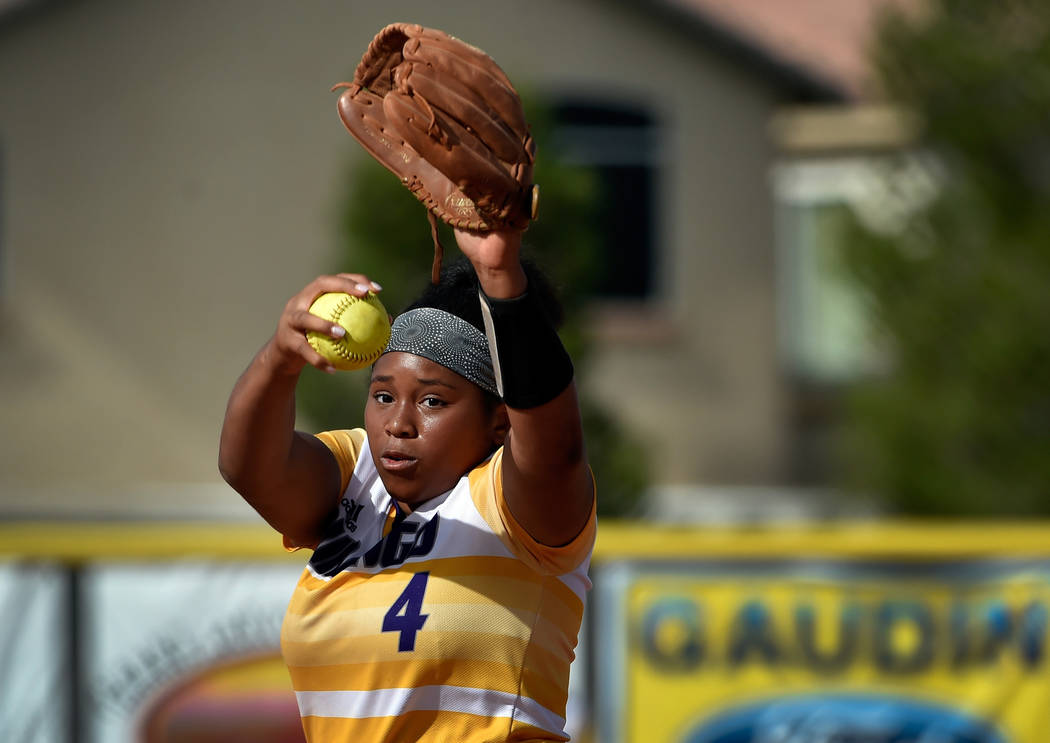 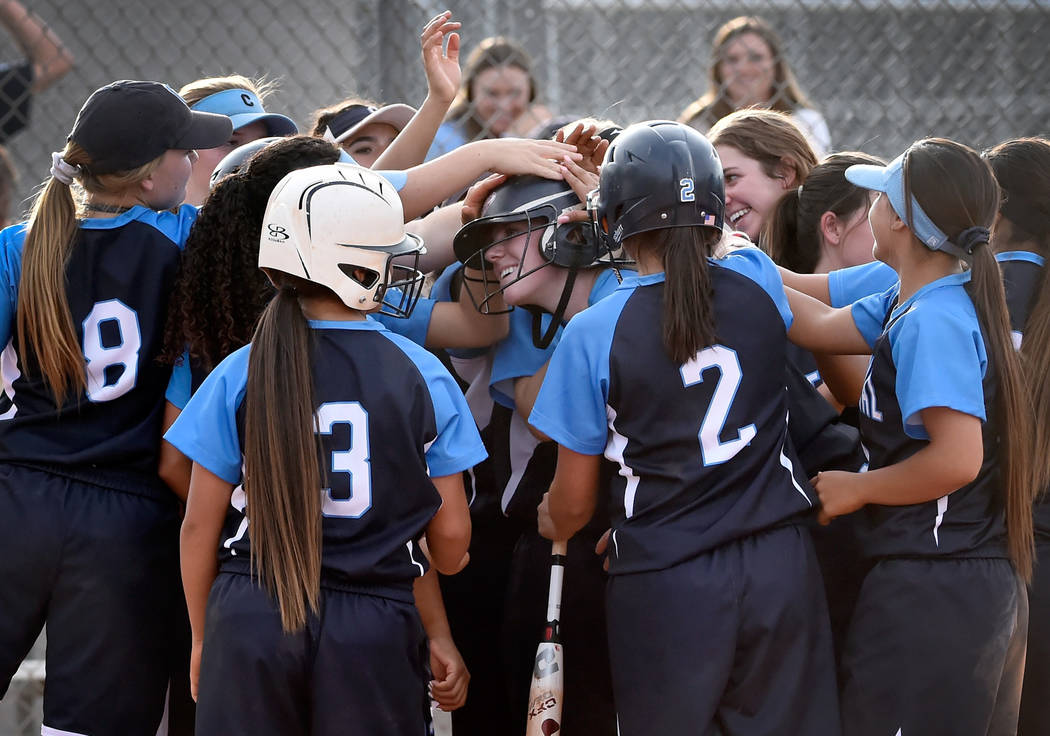 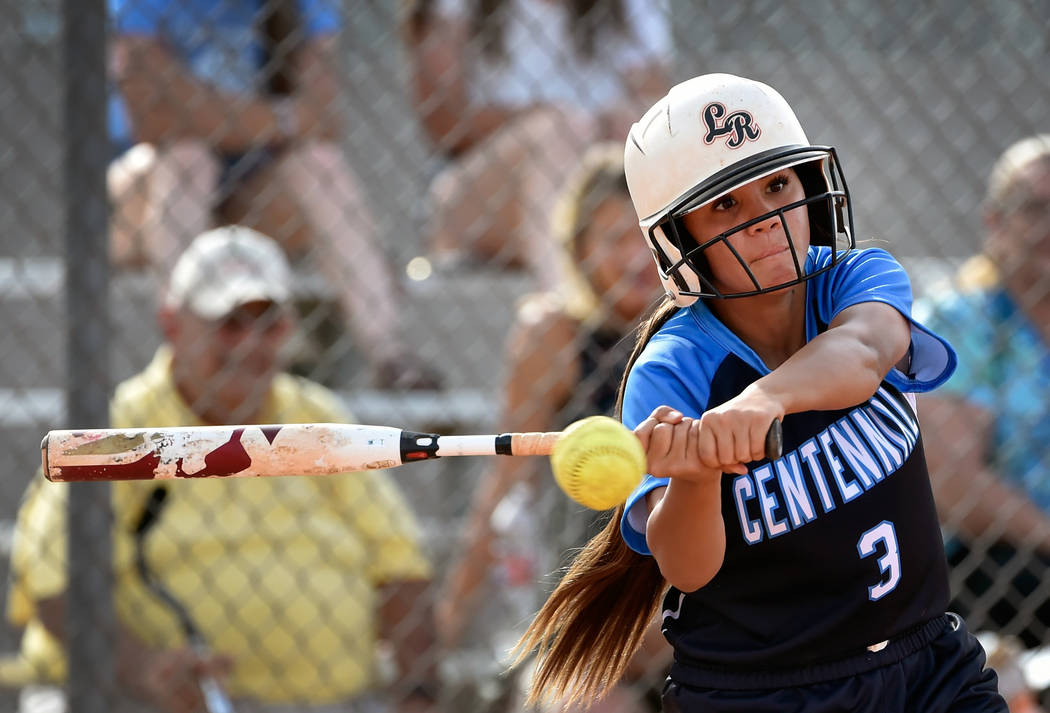 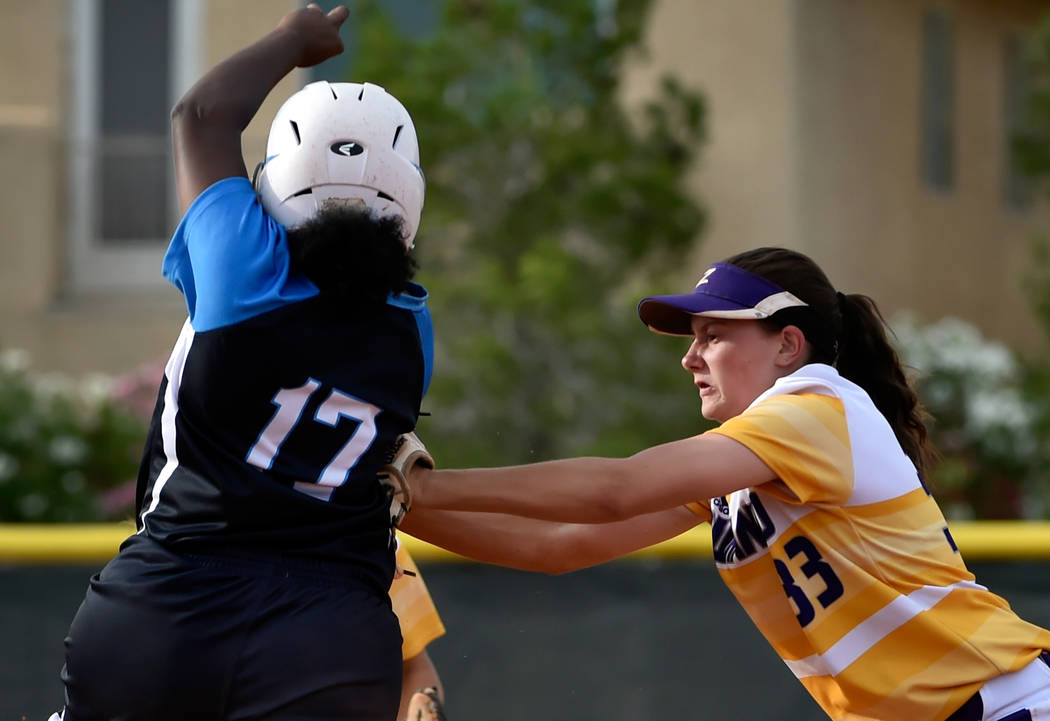 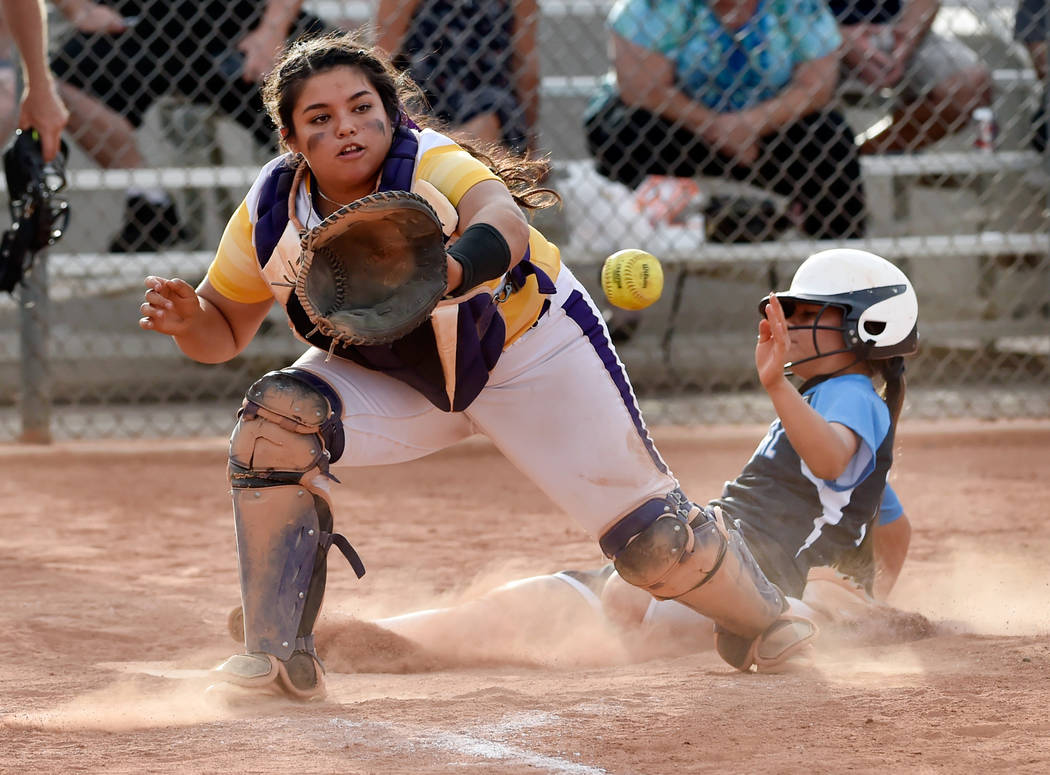 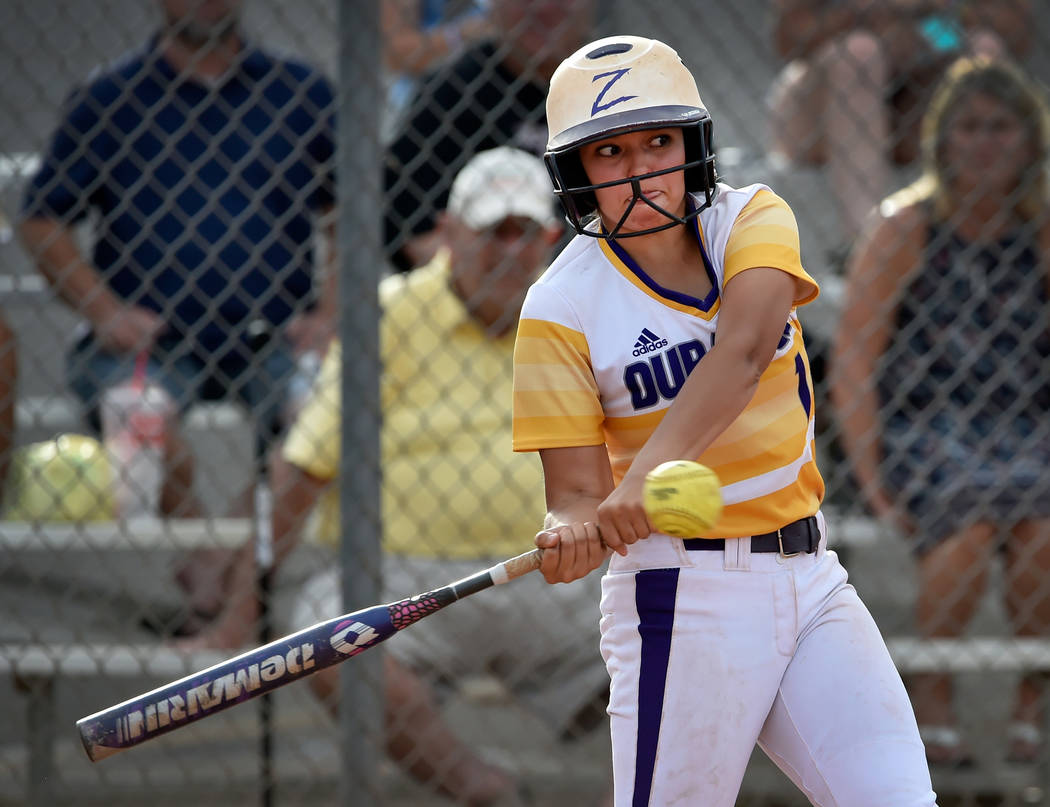 There came a point in Wednesday’s game that the question no longer was whether Centennial would win but if Amanda Sink would enter the softball record book.

Sink said she knew she had struck out 20, but learned later it was a state record. After her performance against Durango, Sink sits alone atop the Nevada record book for most strikeouts in a seven-inning game, and Centennial cruised to a 12-0 road win to open the Sunset Region tournament.

“That’s going to stay with me,” Sink said. “It’s a big accomplishment.”

It became apparent early that the record was in jeopardy. Sink recorded her first 15 outs by strikeout, a soft sixth-inning pop-up the first time she needed her fielders. She took a no-hitter into the sixth and allowed two hits. She was overpowering, blowing fastball after fastball by the Trailblazers (23-11-1). Sixteen of her strikeouts were swinging.

“I tallied it up there, and when we got done with the game and I’m like hold on a second — 20? Out of 21 outs?” Centennial coach Mike Livreri said. “You don’t expect 20 strikeouts; nobody would ever expect that.”

But it took until the fourth for Sink to feel comfortable. After Durango’s Trinity Valentine matched Sink the first time through the order, Seanna Simpson led off the Centennial fourth with a double, and the Bulldogs (21-14) scored three runs without the ball leaving the infield.

The floodgates opened in the fifth for six Centennial runs, and Jillian Bartley’s two-run homer in the seventh punctuated the scoring.

Then all eyes turned to Sink for the bottom of the seventh. She looked human for a moment after allowing a single and a walk, but responded with two strikeouts for the state record.

“I wasn’t trying to strike them out,” Sink said. “I was just pitching. I was focusing on throwing it over the plate.

Sink’s outing put her fourth on the state’s all-time list for strikeouts in a game. The three efforts better than her’s came in extra innings.

She broke the seven-inning record of 19 that was held by three pitchers, including former Bulldog Shannon Crisp in 2004.

Foster struck out seven and walked one. She faced only one batter more than the minimum.

Clara Heislen went 2-for-3 with a home run and three RBIs for Faith Lutheran (15-13). Audrey Kirsch was 2-for-3 with a triple and three runs, and Hailey Hines, Grace Hornsby and Kelsey Howryla each added two hits for the Crusaders, who scored in every inning.

Shadow Ridge 15, Desert Oasis 3 — At Shadow Ridge, Alyssa Stanley was 2-for-3 with a grand slam and five RBIs to power the Mustangs by the Diamondbacks in six innings.

Meaghan McInerney was 3-for-3 with a double and an RBI for Desert Oasis.

Palo Verde 10, Bishop Gorman 0 — At Palo Verde, Kendall Hopkins tossed a five-inning three-hitter and struck out seven to lead the Panthers by the Gaels.

Monique Passalacqua was 1-for-2 with a double for Gorman.