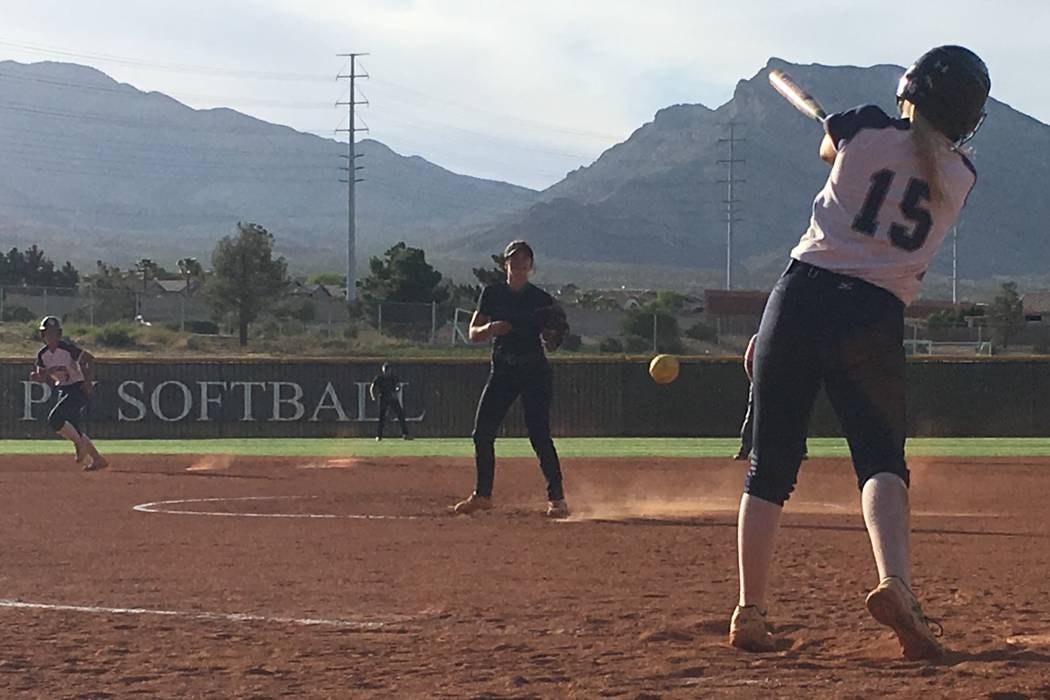 Makall Whetten wanted Thursday to be special. With the remaining playoff games at neutral sites, the senior knew if her Palo Verde softball team won it would be the last time she would play on her home field.

She made sure to leave her school with an exclamation point.

Whetten knocked a two-out, two-RBI single in the bottom of the sixth inning to give the Panthers a 5-3 win over Shadow Ridge. The Mustangs left the bases loaded in the seventh, and Palo Verde advanced to its ninth straight Sunset Region final.

“This program has done so much for me, so why not give it back?” Whetten said. “I put a good swing on it and got a hit.”

Palo Verde (30-7) will play at 9a.m. Saturday at Bishop Gorman, with its opponent to be determined Friday.

Whetten set the tone early, leading off the bottom of the first with a double and scoring on of two runs in the inning. Shadow Ridge (24-10) tied it in the third, only to see Palo Verde’s Lauryn Barker stroke her second RBI of the dfay in the bottom half to restore the Panthers’ lead to 3-2.

There the game stayed until the sixth, when Shadow Ridge strung together a walk and three hits to tie the game and put the go-ahead run on second with two outs. Alyssa Gainey drove a ball to left that swirled around in the wind, and after a brief scare, ended up in the glove of Jessica Hopkins.

“I think the wind was blowing in and I went for it and luckily it didn’t get too far behind me,” Hopkins said.

As luck would have it, Hopkins was due to lead off the bottom of the sixth, and blasted a double. She and Kendall Hopkins came around to score on Whetten’s single.

“I knew if I got on, I would score. I had a lot of trust in Kendall and Taylor (Askland) and Makall behind me,” Jessica Hopkins said. “Without them we would have never won the game, but I was happy I was able to lead it off.”

Askland pitched a complete game for the Panthers, and Grace Chavez hit a double.

Jasmine Martin went the distance for Shadow Ridge with two earned runs allowed, and Alyssa Stanley doubled. Teammate Caitlyn Covington was 2-for-4 with an RBI.

The Mustangs will play at Bishop Gorman on Friday against either Centennial (22-15) or Faith Lutheran (16-14).

Faith Lutheran 13, Bishop Gorman 1 — At Gorman, Sophie Foster spun a four-hitter and struck out 12 as the Crusaders eliminated the Gaels.

Ellie Fried led a 21-hit attack for the Crusaders, going 4-for-5 with three runs. Audrey Kirsch was 3-for-5 with a double and three RBIs, and Clara Heislen and Patti Kirsch each went 3-for-5, and Maggie Whipple was 2-for-4 with a home run, a double and two RBIs for Faith Lutheran.

The Crusaders will play Centennial at 1 p.m. Friday at Gorman, with the winner advancing to play Shadow Ridge in the losers’ bracket final.

Centennial 11, Desert Oasis 0 — At Centennial, Amanda Sink spun a five-inning four-hitter and struck out 10 as the Bulldogs eliminated the Diamondbacks.

Deanna Barrera and Jillian Bartley both homered for the Bulldogs, who gave head coach Mike Livreri his 400th career win.