Coronado boys tennis coach David Willingham wasn’t sure exactly what to expect against an unfamiliar opponent at the Class 4A state tennis tournament on Wednesday in Reno.

The Cougars singles player put him at ease early.

“Coming north to play a team from Reno, you don’t know what they have,” Willingham said. “You’re not sure what they’re going to come up with. You’re always concerned where the wins would come from, but I saw our singles players were in really good shape, so we felt really comfortable after that first round.”

He felt even better after the second round when Ethan Quandt, Sebastian Frace and Zachary Sullivan each won their sets 6-0 to help the Cougars take a 10-2 lead and clinch the win.

“It was a great second round,” Willingham said.

“You always play for another day,” Willingham said. “And we get to have the next day, and that’s all you can ask for.”

Michael Doerr and Zach Schreurs were 2-1 in doubles for Spanish Springs (11-3). 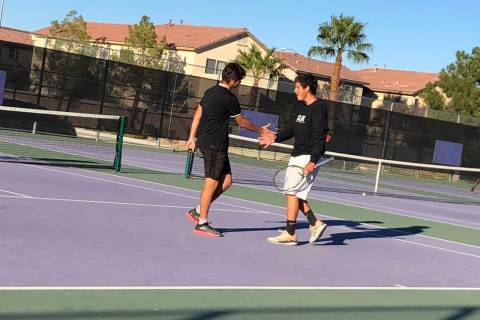 Clark (16-1) eked out an 11-7 win over the Bengals in the first round of the Class 4A state tournament to earn a berth in the semifinals, which begin Thursday in Reno.