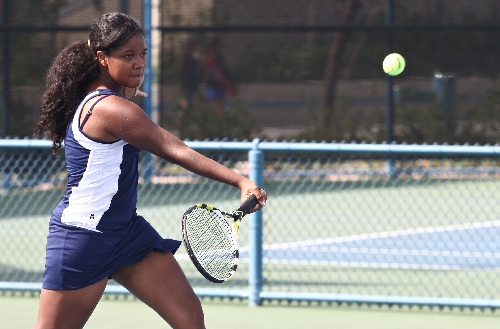 Coronado tennis coach Luther Bohanan had his hands full while trying to leave the Darling Tennis Center on Saturday.

His Cougar boys and girls left him with a full cooler and a basket full of apples and two trophies to take to his car.

The veteran coach emptied the cooler and gave away the apples, but he wasn’t about to let the trophies get out of his grasp.

After watching the school’s boys team breeze to a Sunrise Region title earlier in the morning, the Cougar girls gave Bohanan and their school another piece of hardware with a 15-3 win over Green Valley in the region final.

Coronado (13-0) captured its third straight and eighth overall Sunrise title and will participate in the Division I state tournament, which begins Oct. 18 in Reno.

“It never gets old,” Bohanan said. “I love it because it’s school pride. These kids work so hard. We don’t take it for granted. We take it one match at a time and one point at a time.”

The Cougars started fast, rolling to a first-round sweep and bumping the lead to 9-0 when Sammy Smith, Nicole Gardner and Paris Reese each won a second-round singles match.

“We have some good singles players,” Bohanan said. “It’s a luxury, but I enjoy that luxury because they’re solid kids and they’ve got some skill. I’m just glad they’re playing for me.”

Marina Arriola and Sabrina Van Buskirk won a doubles match to stretch the lead to 10-0, securing the win.

Reese and Smith each went 3-0 in singles for Coronado. Gardner was 2-0 in singles, and Arriola and Van Buskirk were 2-0 in doubles. Marlee Allison and Lauren Coons went 2-1 in doubles for the Cougars.

“Our kids just go out and compete,” Bohanan said. “That’s all they do.”

The doubles teams of Josie Legarza and Tasha Dewitt, and Racquel Holder and Sydnee Crosby each went 1-1 for the Gators (12-1), who were bidding for their first region title and state berth since 2008.