If you are having problems accessing today’s e-Edition, please click on this link VIEW E-EDITION
Las Vegas Review-Journal
February 25, 2019 - 11:37 am 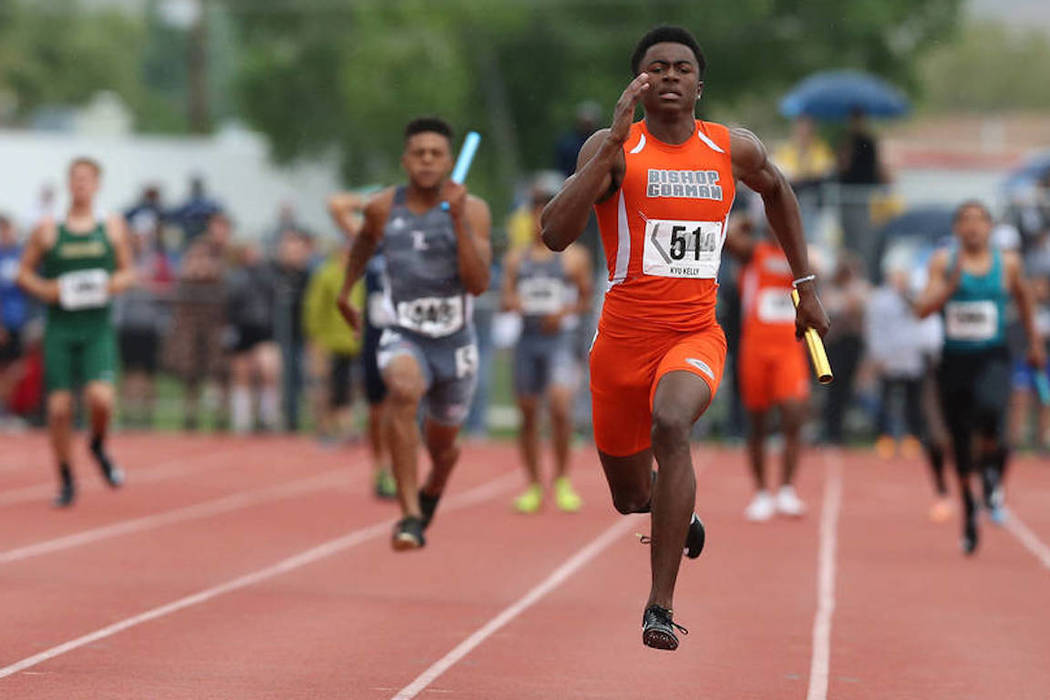 Outlook: The Aggies bring back 16 lettermen from a team that finished tied for fourth in the Sunset Region meet.

Dickinson is one of the top wheelchair athletes in the state, and the Aggies should have plenty of depth to compete again this year.

Outlook: The Gaels bring back 18 lettermen from a team that won the program’s first Class 4A state and Sunset Region titles.

Kelly was the state champion in the long jump, second in the 200-meter dash, third in the 100 and ran on the 400 relay team.

Hunterton was the state champion in the triple jump and finished in the top six in the Sunset in the other jumps. Swenson (3.200) and Smith (110 hurdles) also were state finalists.

Outlook: Tanael finished third in the pole vault in last year’s Class 4A Sunset Region meet and leads a group of 17 returning lettermen for the Bengals.

Outlook: Raffta took second in the 400-meter dash in the Class 3A state meet last year and leads a group of eight returnees for the Cowboys.

“Our overall team goal is to improve in our team scoring at the regional meet,” Francis said. “We have team members that are experienced and want to go to state, especially our seniors, and a group of young, inexperienced team members with a great deal of talent that can help us achieve our goal.

“We anticipate returning to the state championship in the 400 and relay events.”

Outlook: Reed placed third in the high jump in the Class 3A state meet, and Cone was part of a state-qualifying relay team last year.

They’re among five returning lettermen for the Desert Shields.

Outlook: Soccorsi takes over a team that is hoping to build in numbers and in success.

“Despite not having a large team, we have several returning seniors looking to qualify for regionals and state,” Soccorsi said. “Returning regional placer Tyler Schoenwald is motivated to take the next step and qualify for the state meet this year. In addition, newcomers Marcus Poole and Jose Carrasco are expected to fare well in both long jump and triple jump. Also, Christian Medina and Izaiah Mendez have a lot of potential in the pole vault.

“Our expectation is to be more competitive than last season.”

“Seniors Mario Tavares and Isaiah Bigby both have a great chance to be state champion contenders in their respective events,” Reeder said. Clark is also recruiting and emphasizing field events this season.”

Outlook: Daniel was the Class 4A state champion in the pole vault last year, and Watterson and Kimball both qualified for the state meet in the 110-meter and 300-meter hurdles.

They’re among 22 returning region meet qualifiers for the Cougars.

“The boys return a handful of quality athletes and will look to compete in the new Desert Region,” Cooper said.

Outlook: McNeal finished third in the triple jump in last year’s Class 3A state meet, and Price-Burrell was part of the 800-meter relay team that finished fourth in state meet.

“The boys team is returning three lettermen with Tylan McNeal and Vincent Price-Burrell, who placed at the state meet, leading the charge,” Brown said. “We are looking to build upon our success from last year, and send more competing athletes to the state track meet.”

Outlook: Nicholas won the 1,600-meter run in last year’s state meet and is one of 16 returning lettermen for the Diamondbacks.

“Conner Nicholas will lead the boys team and try to defend his state championship,” Dinkel said.

Outlook: The Jaguars are loaded with talent in the sprint events.

“We’re looking to be competitive moving up to Class 4A,” Walker said.

“The team is young this year, but has some speed to work with,” Anderson said. “They will need to prepare daily to be ready to step up at the end of the season.”

Outlook: The Sundevils had a young team last year and bring a large number of those athletes back.

“We are excited to continue to develop their talents and will be looking particularly to the jumps and distance races to lead our point scoring,” Mecham said. “We are excited for the upcoming season.”

Outlook: Stewart is the defending Class 4A state champion in the 300-meter hurdles.

The Crusaders also return three of the top four finishers in last year’s Sunset Region pole vault in Gordon (first), Fung (second) and Kuzik (fourth). Filbert was a region meet finalist in the long jump, and Baughan was a cross country state meet qualifier in the fall.

“We hope to have our large group of returners continue and build on their previous success, and with the development of underclassmen and newcomers, compete for another top-three finish at regionals,” Kober said.

Outlook: The Falcons finished eighth in last year’s Sunrise Region meet and are hoping to continue to show improvement this season.

Outlook: The Centurions are in their first year competing against state association schools.

With only four athletes on the preseason roster, the team is focusing on building and individual improvement.

Outlook: Gorre finished second in the Sunrise Region pole vault competition, and Krynzel was fourth in the region meet in the discus.

They’re among 15 returning lettermen for the Gators.

“We are looking forward to a great year,” Pike said. “This is a very fun group. Keeping student-athletes focused in the classroom is our main goal this year; this will help the team performance improve on the track.

“With dedication and working hard during practice the team can achieve great things this season.”

Outlook: The Guardians still are in the building stages.

“We have a very young team,” Varughese said. “This team works extremely hard and strives to improve every day. They are self-motivated and choose to have fun every day.

“The potential for this team is very high, and I look forward to witness them accomplish their goals this season.”

Outlook: Henderson International is returning to Nevada’s athletic scene after a near decade-long absence.

“This is our first year with track being our first high school sport,” Lively said. “We currently only have freshmen at our school.”

Outlook: Still in the growing stages of their program, the Eagles hope their second year will be even more successful than last year’s debut.

Sohus and Percival each ran a leg on the Eagles’ 800-meter relay team that finished second in the Class 2A state meet.

“We are working hard attempting to grow the program,” Newton said. “We are hoping to add more particpants compared to last year, relying on several returning athletes from last year. Our hope is that their leadership will help build this program and compete at the 2A level.”

Outlook: Moore was the Class 4A state champion in the discus last year.

“Corey Moore hopes to be ranked among the top five discus throwers in the nation and to defend his 2018 state championship in the discus,” Walker said. “He also looks to win state in the shot put.”

White, Britt, Leathers and Distrito all qualified for the state meet last year, and Miller, Elder and Clark were Sunrise Region meet qualifiers.

“Liberty returns a tough, experienced, and deep group of athletes,” Walker said. “The versatility of our kids will be our strength. We look to compete for a regional and state championship.

“White leads a deep sprint squad. Miller and Elder are both capable of qualifying for state in the jumps.”

Outlook: Little returns in the sprint events, Cook in the distance events and Becker and Kufuor in the throws.

“It’s a rebuilding year for The Meadows,” Gray said. “Our numbers are down, but there is good quality in the events we will compete in.”

Outlook: Slighting is the defending Class 4A state champion in the 3,200-meter wheelchair event. Jordan was a Sunset Region meet qualifier in the 3,200. Siroky, who was injured last year, and Patho, who ran the 400, also are among six returnees for the Panthers.

“We are very young this year, with over half the team being first-year track and field athletes,” Meis said. “Our goal this year is to get better each meet and be competitive at the end of the season.”

Outlook: The Mustangs return 13 lettermen and are hoping for a successful season.

“We hope our athletes reach their full potential and have a great season,” Romero said.

Outlook: The Mountain Lions bring back only six lettermen, but have some quality athletes in state-meet qualifiers Stephenson, Clayton and Molina, and Sunset Region meet qualifier Pinckney.

“We are looking to build upon our success last year, and send more competing athletes to the state track meet,” Quinn said.

Outlook: The Skyhawks bring back 10 lettermen from a team that finished fifth in the Sunrise Region meet and had the state champion in the 3,200-meter run (Omar Aguilar-Espinosa).

Bossie and Parker both were state-meet qualifiers last season.

“We are young and look to improve as the season progresses,” Oliver said.

Outlook: Franklin was eighth in the 3,200-meter run in last year’s Class 4A state meet.

He and Jones will anchor the middle-distance and distance events for the Vikings, who hope to have a successful Class 3A debut.

“Our boys team should be better as we have quite a bit of experience back,” Hartman said. “Our strengths should be in the throws and hurdles.”

Outlook: Clark and Tiliaia are expected to be among the leaders on a team that has high hopes for this season.

“We are looking to build on last season’s successes,” Sato said. “There’s some strong talent on the team this year.

“The goal is have multiple regional qualifiers to put ourselves in a strong position to compete at the state level.”