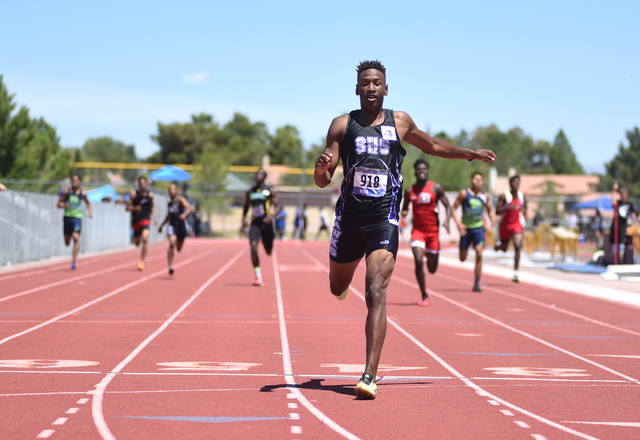 Silverado senior Zakee Washington, shown after winning the boys 400-meter dash at the Division I Sunrise Region track and field meet on May 14 at Del Sol, announced Monday on Twitter he made an oral commitment to Arizona. (Martin S. Fuentes/Las Vegas Review-Journal)

Silverado senior Zakee Washington on Monday announced via Twitter his commitment to run track and field at Arizona next season.

The 6-foot-3-inch standout, a transfer from Palo Verde, was the top-ranked boys 400-meter dash runner in the state this season. Washington’s commitment is nonbinding, and Arizona’s coaches cannot comment until he signs a letter of intent.

He set a personal record in the 400 — 47.27 seconds — at the Division I state meet to lead the Skyhawks to the team title in May. His 400 time was tied for 36th in the nation this past season, according to Dyestat.com

Washington also placed eighth in the 200 (22.82) and ran a leg on two state-qualifying relay teams.

In April, Washington ran a 47.50 to win the 400 at the prestigious Mt. SAC Relays in California.