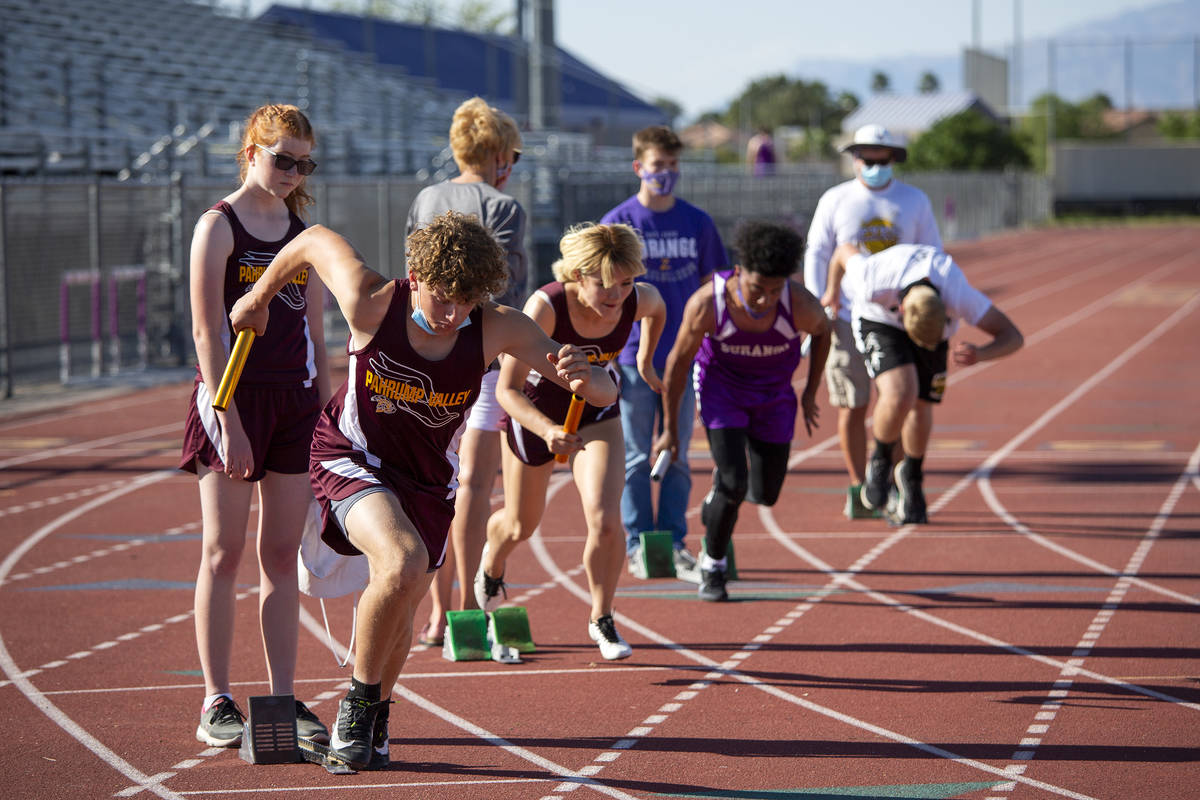 High school track and field athletes compete in the 4x400-meter race during a meet at Durango High School on Friday, May 7, 2021, in Las Vegas. (Ellen Schmidt/Las Vegas Review-Journal) @ellenschmidttt

If there’s one sport this spring that looked different from a normal season, it’s track and field.

Meets were limited to four teams, a drastic change from the 15-20 that normally would be in a weekend invitational.

But the biggest difference was the number of competitors on each team. Several schools that normally have more than 100 athletes in their programs had those numbers slashed in half or even more.

“One of the biggest hurdles that track coaches had to deal with this year is fielding a team,” Desert Oasis coach Jim Dinkel said. “Most of the team you get by word of mouth, in the classroom, in the hallways, talking to fall and winter coaches to get athletes out to try this sport. We didn’t see them in the classroom this year.”

When the regional meets take place this week, it will be a return to normalcy.

The Class 5A Southern Region meet will be held with 10 teams Friday and Saturday at Liberty. The two 4A regions will have separate meets, with the Desert Region’s nine teams competing Monday and Wednesday at Desert Oasis and the Mountain Region’s 10 teams facing off Tuesday and Thursday at Foothill.

Bishop Gorman is the clear favorite in the 5A boys with a deep and talented squad. The Centennial girls are a dynasty with nine straight state championships. The Bulldogs are the favorite, but Coronado could challenge.

“It’s tough. Last year’s team was built to win the 10th state championship in a row,” Centennial coach Roy Session said. “We lost some major players to college. We’re still poised to do very well, but we would have loved to put that title under their belt as state champ.”

Unlike the Clark County School District schools, Gorman was in school all year and its numbers haven’t been affected as much.

“Our kids are so desperate to compete, it pushed kids out that normally wouldn’t do track,” Gorman coach Bree Thorpe said.

Most of the four-team meets in the valley have been structured in which there are one or two big schools and one or two smaller ones.

Because of that, coaches said gauging the competition has been another challenge this season. Dinkel said he looks at results, but understands times could be misleading because the top athletes don’t necessarily have anybody pushing them.

“The first two meets, we were the only team to run in relays,” Dinkel said. “So you do as well as you can. I’m not putting down those smaller schools, but it’s just different when you’re not going against schools that have similar numbers.”

Thorpe said Gorman got a look at how well it could compete when pushed last weekend at Brigham Young. She liked what she saw, with the Gaels coming in second out of 78 teams with only 14 boys on the trip.

“One thing we always try to tell our kids is it’s not about being the best in Nevada but to compete nationally,” Thorpe said. “When racing against some of the best, how do they compete. They rose to the challenge (last week). But we never go into any kind of competition assuming we’re going to get it. Everybody has to be their best that day.”