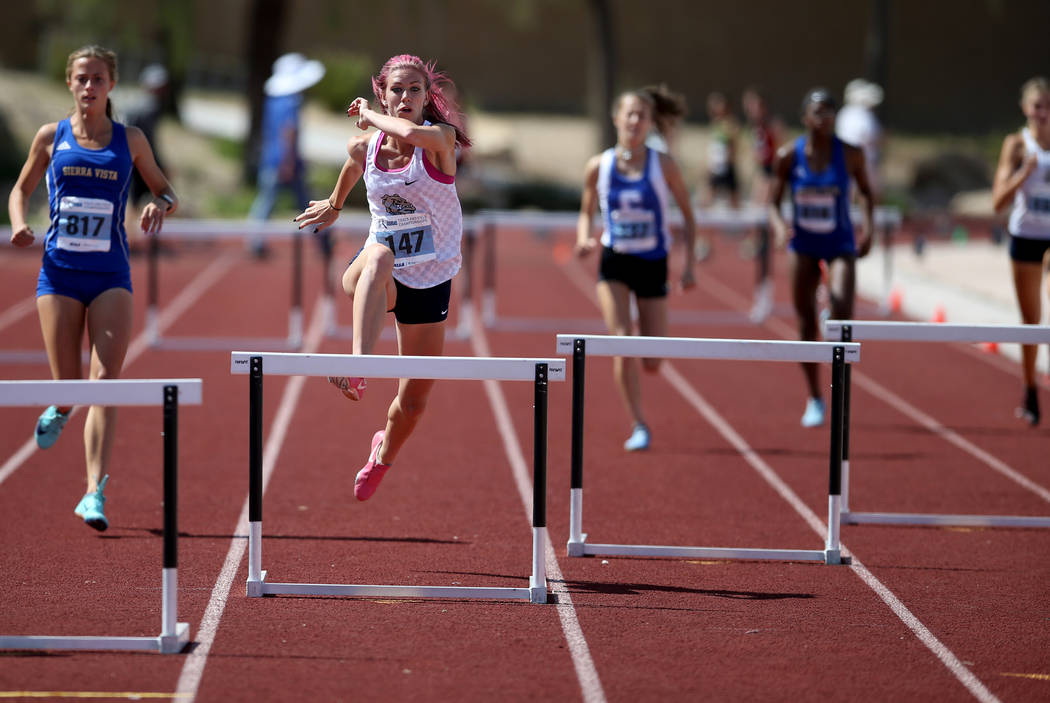 Quincy Bonds of Centennial, second from left, on her way to winning Class 4A 300 meter hurdles in the state track meet at Desert Oasis High School in Las Vegas Saturday, May 18, 2019. Competing with Bonds, from left, are Audrey Dayton of Sierra Vista, Ashley Britt of Carson, Ajanae Cressey of Sierra Vista and Cheyenne Jones of Centennial. (K.M. Cannon/Las Vegas Review-Journal) @KMCannonPhoto 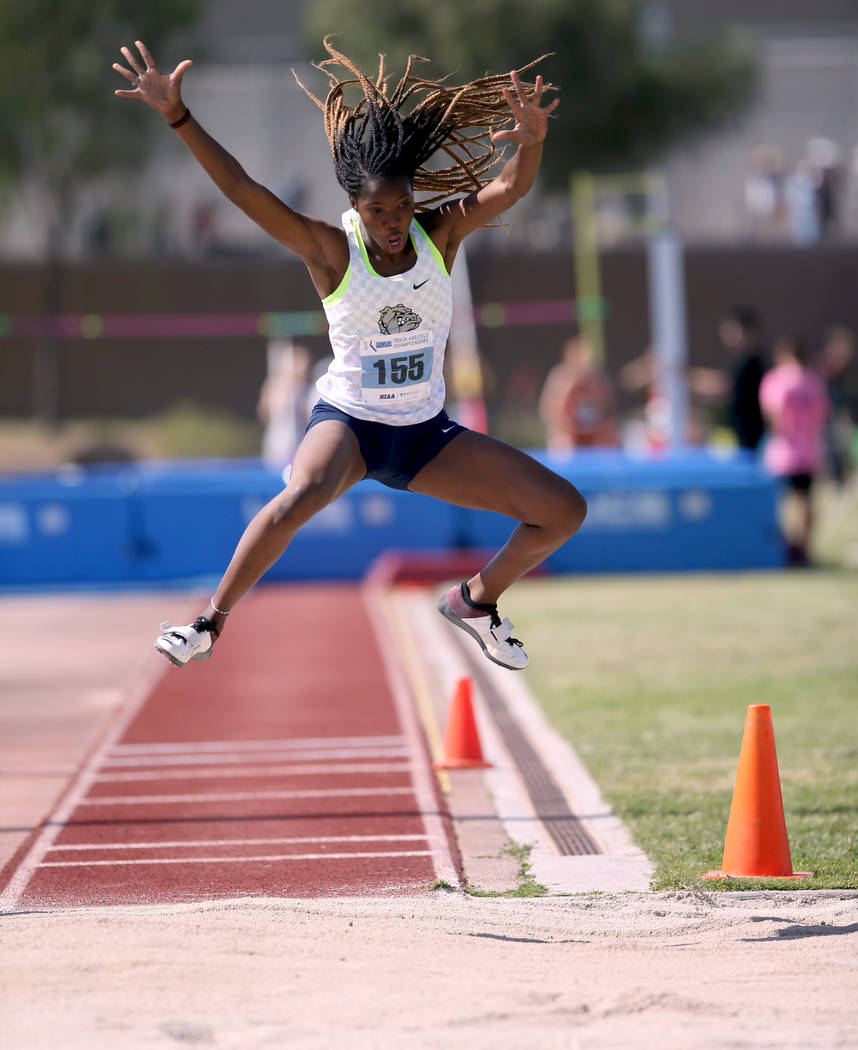 Ashley Moore of Centennial competes in the triple jump during the Class 4A state track meet at Desert Oasis High School in Las Vegas Saturday, May 18, 2019. Moore won with a state meet record jump of 40-5.75. (K.M. Cannon/Las Vegas Review-Journal) @KMCannonPhoto 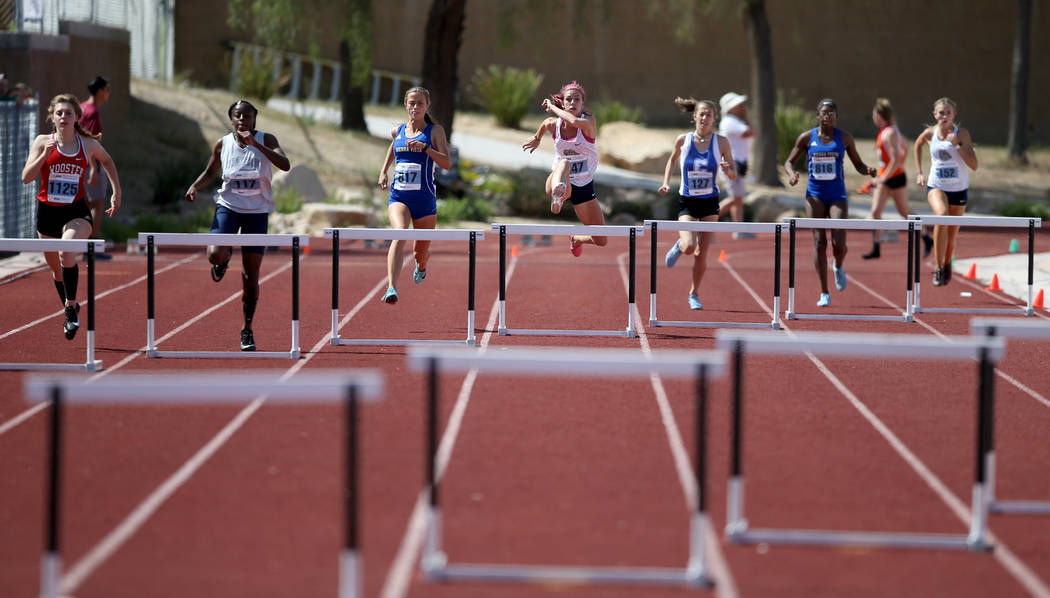 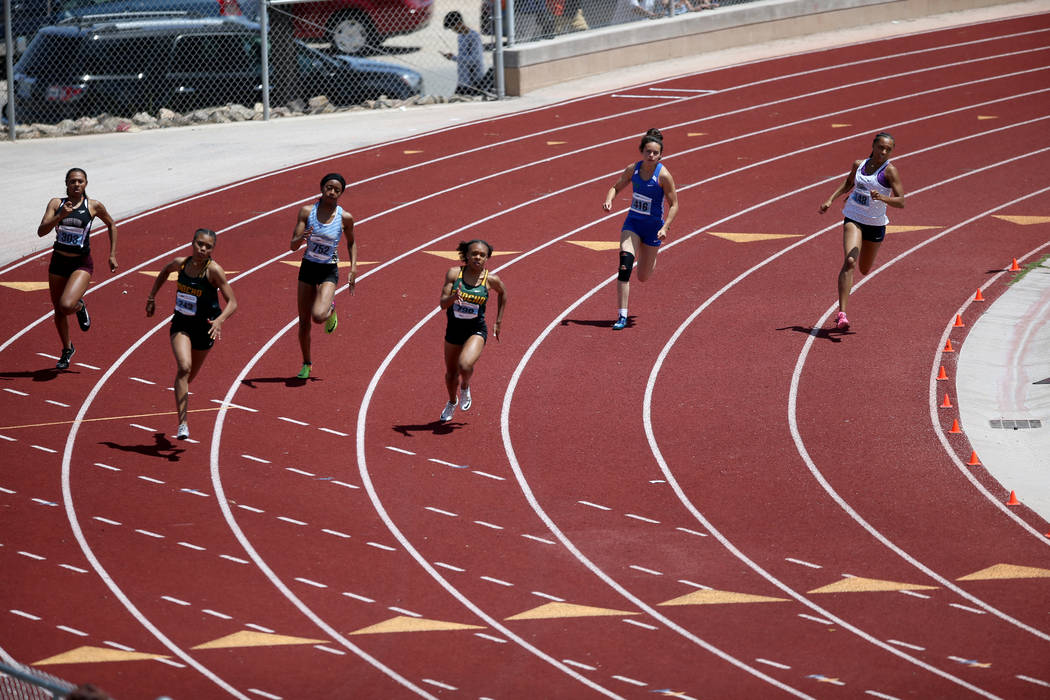 Endya Scott of Desert Oasis, from left, Aniya Smith of Rancho, Roxann Patterson of Reed, Amir’a Edmond of Rancho, Sierrah Rivera of Green Valley and Kennedy Brace of Centennial compete in the Class 4A 200 meters in the state track meet at Desert Oasis High School in Las Vegas Saturday, May 18, 2019. Edmond went on to win with a time of 24.43 seconds. (K.M. Cannon/Las Vegas Review-Journal) @KMCannonPhoto

The Centennial junior set the meet record Saturday in the triple jump at the Class 4A state track championships at Desert Oasis, going 40 feet, 5¾ inches on one of her preliminary jumps.

But she didn’t meet her own lofty standards.

“Today, 42 (feet) was the goal,” said Moore, who also won the long jump on Friday. “I scratched the big jumps today.”

Missing that goal was about all that went wrong for the Bulldogs girls all weekend.

Moore wasn’t the only Bulldog adding titles to the total, either.

Junior Quincy Bonds repeated as the champion in the 300-meter hurdles, finishing in 43.71. Bonds won the 100 hurdles and ran on the winning 400 relay team Friday.

Classmate Kennedy Brace also contributed two titles on Saturday. She first ran a personal record 54.82 to capture the 400 in the morning, but made a face of disgust at the finish line.

“I was really upset,” Brace said. “My goal this year was 53. I wil be looking for bigger as the (club) season goes on this summer.”

She then seemed to take out some of that early frustration during her anchor leg on the winning 1,600 relay to end the girls meet in the afternoon.

When Brace took the baton for the final 400 meters, Centennial was in third place behind Sierra Vista and Arbor View.

Neither was a match for a determined Brace.

By the end of the first turn, Brace had caught and passed Arbor View. Before the back straightaway curved into the final turn, she’d blown by Sierra Vista, bringing home the title in 3:55.86.

“In the back of our heads, we always are thinking there might be someone out there that wants our title,” Brace said. “We just stay focused, stay prepared.”

White Pine pulled away from the field to win the Class 2A meet with 206 points.

North Tahoe was second with 137 points. Incline took third with 103, and Pershing County was fourth with 78.

Eureka won three of the six field events and held off Wells for the Class 1A title.