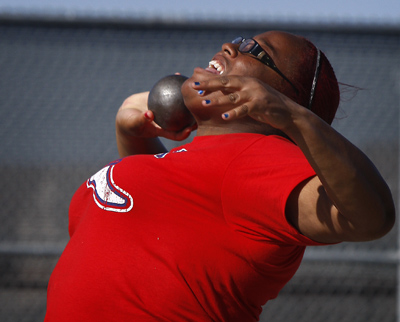 Liberty shot put and discus standout Ashlie Blake left no doubt about her place among the nation’s elite this season.

It’s not a bad place to be for someone halfway through her high school career.

Blake, who recently completed her sophomore season, set a state shot put record with a throw of 50 feet, 6 inches at the state meet in Reno and won the state discus title at 152-3.

For her efforts, Blake has been named the Las Vegas Review-Journal’s Class 4A Girls Track and Field Athlete of the Year.

“That was the best thing ever when I finally threw 50 at the end of the season. I was hoping for that all year,” she said.

Blake had been close to 50 feet all season in the shot put, including a mark of 49-10½ to win the prestigious Arcadia (Calif.) Invitational in April. One person who wasn’t surprised to see Blake make history at the state meet was Liberty throws coach Tim Cagle.

Blake’s state record of 50-6 in the shot put is the No. 2 outdoor mark in the nation this season, according to ESPNHS.

The previous state meet record was 48-0, set by Carson’s Jessica Marable in 1995.

Blake’s state-winning throw of 152-3 in the discus also was a Damonte Ranch High stadium record.

Blake, who transferred from Palo Verde to Liberty for her sophomore year, is receiving recruiting interest from most Pac-12 Conference schools and UNLV. She has designs on competing in the 2016 U.S. Olympic Team Trials.

“Her senior year is going to be phenomenal,” Cagle said. “We’re going to be breaking marks that no one’s going to come close to.”