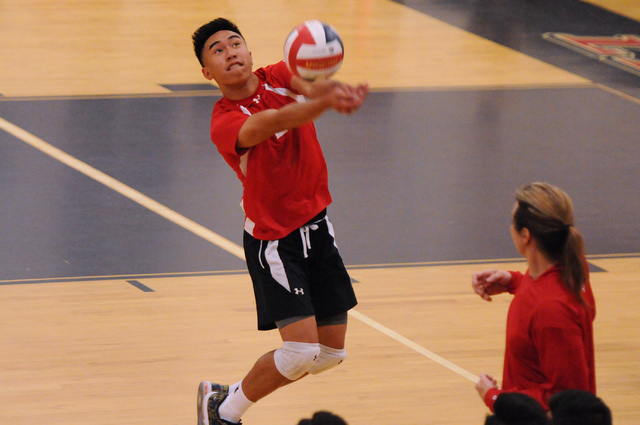 For the past 21 years, the Las Vegas Valley has been home to one of the country’s premier prep girls volleyball tournaments.

Christian Augustin is hoping to do the same for boys volleyball.

“The vision is to create that strong, powerful tournament that is here in Las Vegas so our teams can benefit, but also one that is regionally or nationally known for boys volleyball,” said Augustin, the tournament director. “Granted, when you start, you’ve got to take your baby steps.”

Augustin, who won two state titles as Shadow Ridge coach before stepping down in 2012, said he met with Durango Fall Classic director Bob Kelly two years ago and mirrored the Boys LVI after that tournament, which attracts many of the nation’s top girls teams.

The inaugural Boys LVI had 16 teams, and the field doubled for 2016, with 22 Las Vegas-area squads entered.

“The great thing about it is these teams will get a large amount of games right away,” Augustin said. “They get a lot of great learning, they get a lot of great experience all in two days, where before they would be playing one or maybe two games on that (opening week). And it’s all good competition.”

One of the unique aspects of the Boys LVI is fans can follow results live online, and Augustin said he also hopes to stream matches live on the tournament’s website at www.boyslvi.com.

“Our goal is to make it 21st century,” Augustin said. “Tournaments around the country, they just think in a very small way, and our goal was to make it very technologically based. That’s why you can follow along online.”

Augustin said he envisions the tournament growing in the future and, ideally, attracting the West’s top programs.

“The goal is to expand to another 12 to 16 teams and then start to continually, every single year, improve the talent and competition,” Augustin said. “And it will only be better for Las Vegas teams.”

WHAT’S IN A NAME? — As part of the upcoming realignment, the Nevada Interscholastic Activities Association announced the divisions/classifications will revert to their former names.

That means beginning in the fall, Division I will once again be known as Class 4A, Division I-A will change to Class 3A, Division III to Class 2A and Division IV to Class 1A.

Ron Isaacs of Desert Oasis was the Division I honoree, and Chaparral’s Matt Balodis was the recipient of the Division I-A award during the association’s conference last month in Reno.