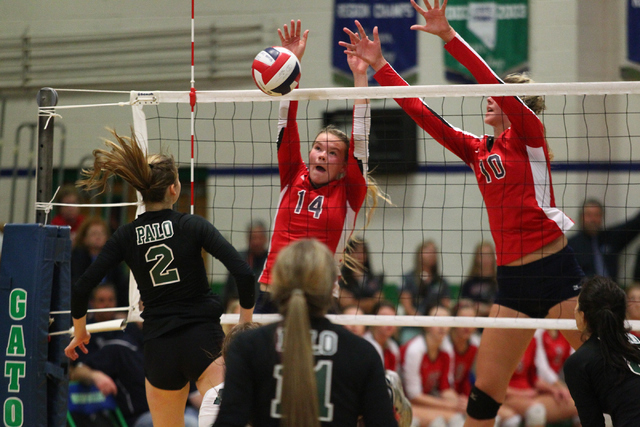 Coronado’s Cali Thompson (14) and Berkeley Oblad (1) attempt to block an attack from Palo Verde’s Lexi Riggs (2) on Saturday. The Cougars ralled from two sets down to defeat the Panthers to claim the Division I state title. 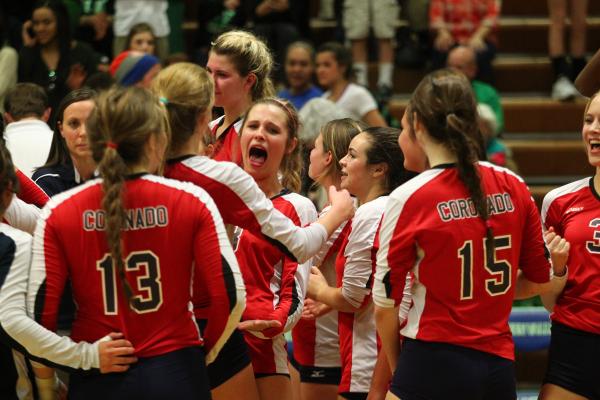 Coronado players celebrate after the Cougars rallied from two sets down to defeat Palo Verde 3-2 for the Division I state title on Saturday. 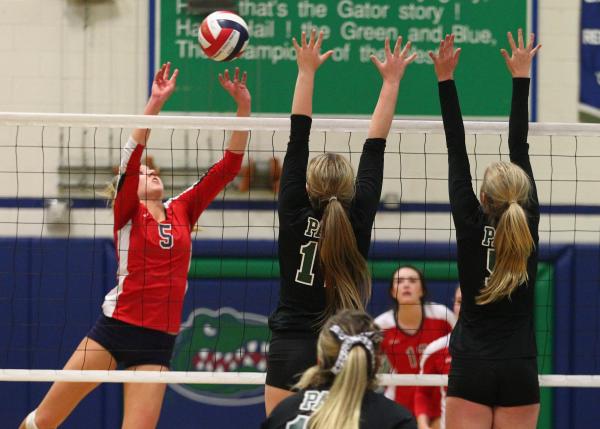 Coronado’s Taylor Jackson (5) sends the ball over the net during the state title match against Palo Verde on Saturday. 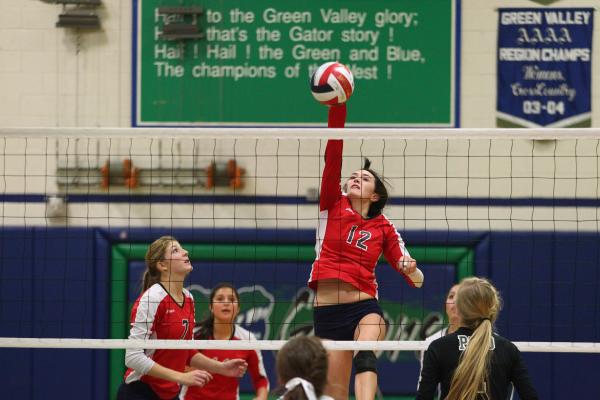 Coronado’s Brooke Garlick (12) hits the ball during the Cougars’ 3-2 win over Palo Verde in the Division I state championship match on Saturday. 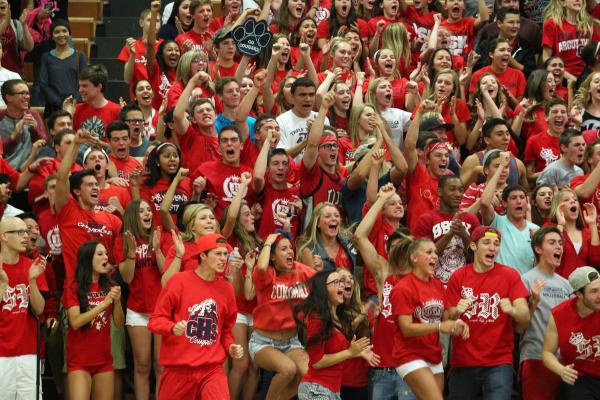 Coronado fans cheer as their team rallies to defeat Palo Verde 3-2 in the championship match of the Division I state tournament. 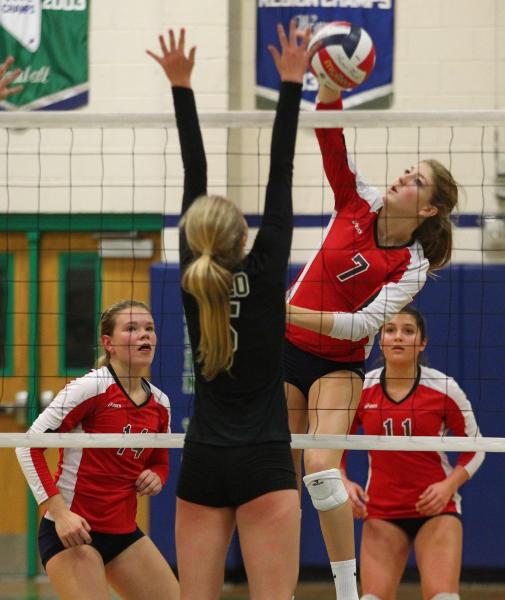 Coronado’s Nikki Jackson sends down a spike against Palo Verde in the Division I state volleyball final on Saturday. 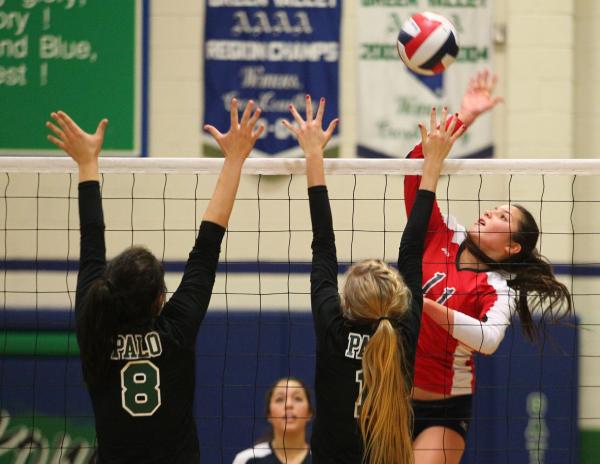 Coronado’s Carolyn Andrulis (11) looks to hit around the block against Palo Verde on Saturday. 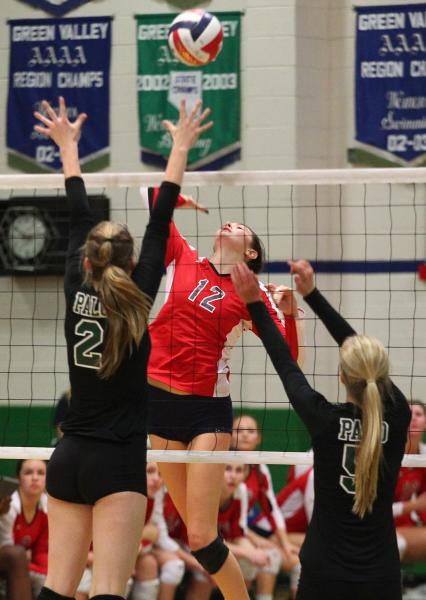 Coronado’s Brooke Garlick (12) looks to for an angle against Palo Verde on Saturday. 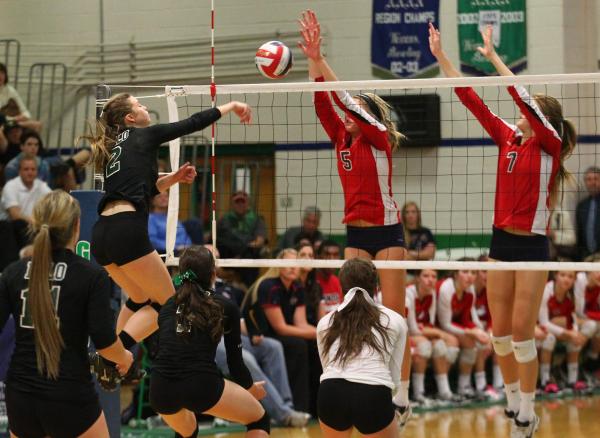 Palo Verde’s Lexi Riggs (2) attacks Coronado during the championship match of the Division I state volleyball tournament on Saturday. 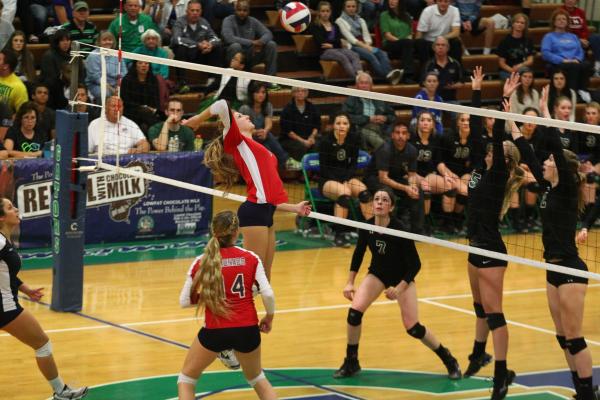 Coronado’s Nikki Jackson (7) jumps to attack against Palo Verde during the championship match ofthe Division I state tournament on Saturday. The Cougars rallied for a 3-2 win for their first state title. 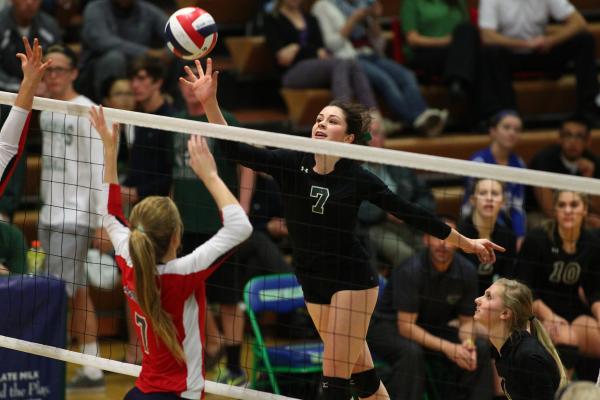 Palo Verde’s McCall Phillips (7) attacks against Coronado during the championship match of the Division I state tournament on Saturday.

For the second consecutive night, the Cougars refused to die.

The state title was the first for the Cougars, who were lost in the final in 2003, the only other time the team advanced to the championship mach.

Coronado coach Matt Johnson, whose team rallied from two sets down to defeat Bishop Gorman in the semifinals on Friday, said it was the most exciting match of his career.

“I guess this one trumps last night by just a little bit,” he said. “The girls just kept gutting it out. They made some great plays and had some great digs. I think we kind of wore (the Panthers) down a little bit.”

The decisive set was a nail-biter, as neither team led by more than three points. But Carolyn Andrulis had back-to-back kills late in the set to give Coronado (31-6) a 13-10 lead.

Palo Verde (35-5) fought back to tie it at 13, but Johnson’s effective timeout call resulted in consecutive Palo Verde errors, with McCall Phillips hitting match point into the net to give the Cougars the win.

“That’s what you hold onto your timeouts for,” Johnson said. “We talked about being clear with communication because we weren’t communicating. We withstood it and got the last two points.”

Palo Verde looked strong early, finishing the first set with an 8-3 scoring run and leading throughout in the second.

But Coronado rallied from a 5-0 deficit in the third set as momentum began to swing.

“We like momentum,” said senior outside hitter Brooke Garlick, the team’s emotional leader. “When we don’t have it, we lose. Once we got it tonight, we just kept pushing.”

Despite a 9-1 scoring run in the third set, the Cougars had to withstand nine tie scores. Andrulis’ service ace and Oblad’s emphatic kill provided the margin of victory and set up an easy win for Coronado in the fourth.

Even then, Johnson was not sure the Cougars would prevail, as his squad had never gone five sets prior to Friday’s semifinal victory.

“I didn’t know what they had in them,” Johnson said. “We’d never been pushed to that point before. But I knew we could draw on last night’s experience. You never know what you’re capable of until you’re put in that situation.”

The Panthers took an 8-5 lead in the final set, but Taylor Jackson’s block later gave Coronado an 11-10 advantage. Palo Verde battled back to tie it, forcing Johnson’s key timeout.

“This feels pretty good,” Johnson said of the state title. “This is a special group of girls. I knew they were special when they came in as freshmen.”