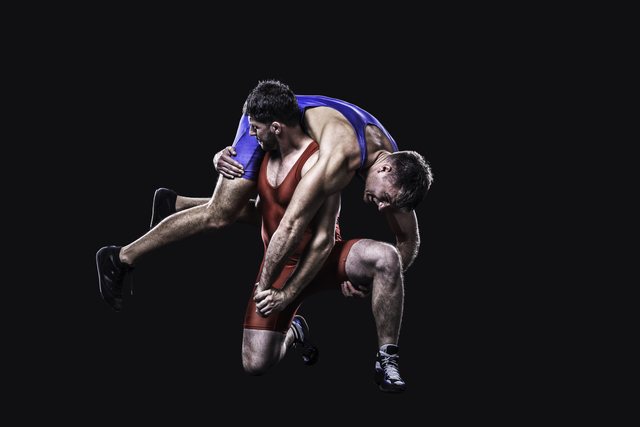 The pin cut Centennial’s lead to 34-30, and the Mustangs won the final match by forfeit.

Nico Antuna (145) won by fall for the Bulldogs.

Centennial 72, Legacy 0 — At Centennial, the Bulldogs shut out the Longhorns.

Shadow Ridge 52, Faith Lutheran 12 — At Centennial, Triston Curtis won by fall in 40 seconds at 120 to lead the Mustangs over the Crusadres.

Faith Lutheran 58, Legacy 9 — At Centennial, the Crusaders won five matches by forfeit and rolled past the Longhorns.

Arbor View 46, Cimarron-Memorial 24 — At Palo Verde, Matt Smith won by fall in 75 seconds at 285 pounds to lead the Aggies past the Spartans.

Cimarron-Memorial 62, Palo Verde 15 — At Palo Verde, Isaiah Rivera won by fall in 44 seconds at 285 to lead the Spartans past the Pantehrs.

Sierra Vista 42, Bishop Gorman 39 — At Sierra Vista, Frank Hines recorded a pin in the final minute of his 182-pound match to help the Mountain Lions edge the Gaels.

Sierra Vista 56, Clark 20 — At Sierra Vista, James Weaver won by pinfall in his 113-pound match to help the Mountain Lions dispatch the Chargers.

Julio Alvarez had a pin in his 145-pound match for Clark.

Sierra Vista 60, Bonanza 12 — At Sierra Vista, James Weaver won by fall in 32 seconds at 113, and the Mountain Lions rolled past the Bengals.

Green Valley 45, Foothill 33 — At Green Valley, Jeremy Hoffmann secured a pinfall in his 138-pound match with 12 seconds remaining as part of the Gators’ victory over the Falcons.

Foothill 72, Coronado 8 — At Green Valley, Robert Silva picked up a pinfall victory in his 106-pound match in eight seconds as the Falcons rolled over the Cougars.

Jordan Marzka won his 182-pound match by a 16-0 technical fall for the Cougars.

Green Valley 72, Coronado 6 — At Green Valley, Abigail Halstead won by fall at 106 pounds in 14 seconds as the Gators blew by the Cougars.

Las Vegas 51, SLAM Academy 15 — At Las Vegas, Antonio Saldate won by pinfall in his 126-pound match in 3 minutes, 50 seconds as the Wildcats coasted to a comofrotable victory.

Las Vegas 66, Chaparral 21 — At Las Vegas, Jakob Alvarado won by pinfall in the final second of the third round of his 170-pound match to help the Wildcats to a dominant victory over the Cowboys.

Dylan Briones posted a pin in his 113-pound match for Chaparral.

Desert Oasis 43, Durango 42 — At Durnago, the teams finished tied at 42, but the Diamondbacks edged the Trailblazers on criteria.

Spring Valley 67, Desert Oasis 11 — At Durango, Ryan Mitchell needed just 17 seconds to win by pin at 106 pounds, and the Grizzlies rolled past the Diamondbacks.

Spring Valley 60, Durango 21 — At Durango, Andres Garcia won by pin in 23 seconds at 145, and the Grizzlies had five first-period pins to beat the Trailblazers.