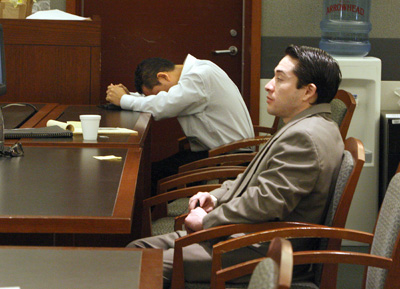 The two men found guilty of murder for the May 2007 fatal bombing atop the Luxor parking garage will spend the rest of their lives in prison without the possibility of parole.

On Friday the jury found Omar Rueda-Denvers, 33, and Porfirio Duarte-Herrera, 29, guilty of building and planting the pipe bomb that killed Willebaldo Dorantes Antonio.

Authorities say Dorantes Antonio was targeted because he was in a relationship with Caren Chali, Rueda-Denvers’ ex-girlfriend and daughter’s mother. Chali was with Dorantes Antonio when the bomb went off and survived.

Prosecutors had sought the death penalty for both men.

Prosecutor Nell Keenan said, "We accept the verdict and this community should accept the penalty these jurors have given down. This is justice."

Attorneys for both defendants said they plan on appealing the verdict on the basis that their clients were not given separate trials.

The defense attorneys, repeatedly before and during the trial, attempted to sever the cases. Those attempts were rejected by District Judge Michael Villani.

Rueda-Denvers and Duarte-Herrera also were found guilty of one count each of attempted murder with use of a deadly weapon and transportation or receipt of an explosive for unlawful purpose, and two counts of possession of an explosive or incendiary device.

A formal sentencing of all the charges will be in November.