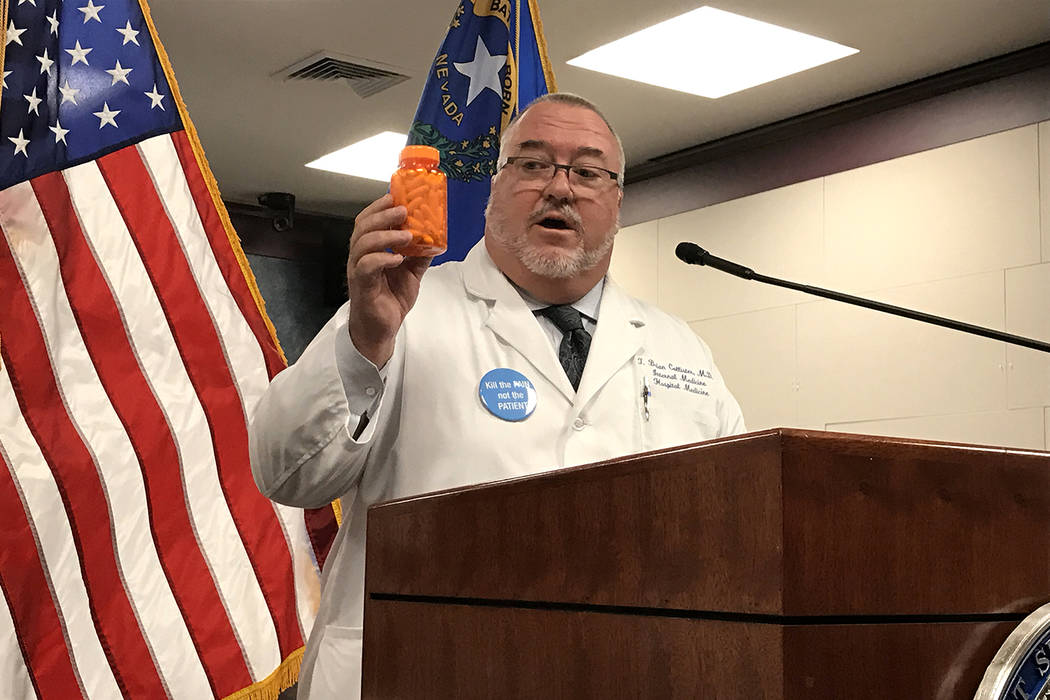 Dr. Brian Callister shows the quantity of pills he said a doctor would have to prescribe for a terminally-ill patient to commit suicide. Callister and others spoke at a press conference on Wednesday, April 12, 2017 to oppose Senate Bill 261 authorizing physician-assisted suicide. (Sandra Chereb/Las Vegas Review-Journal) 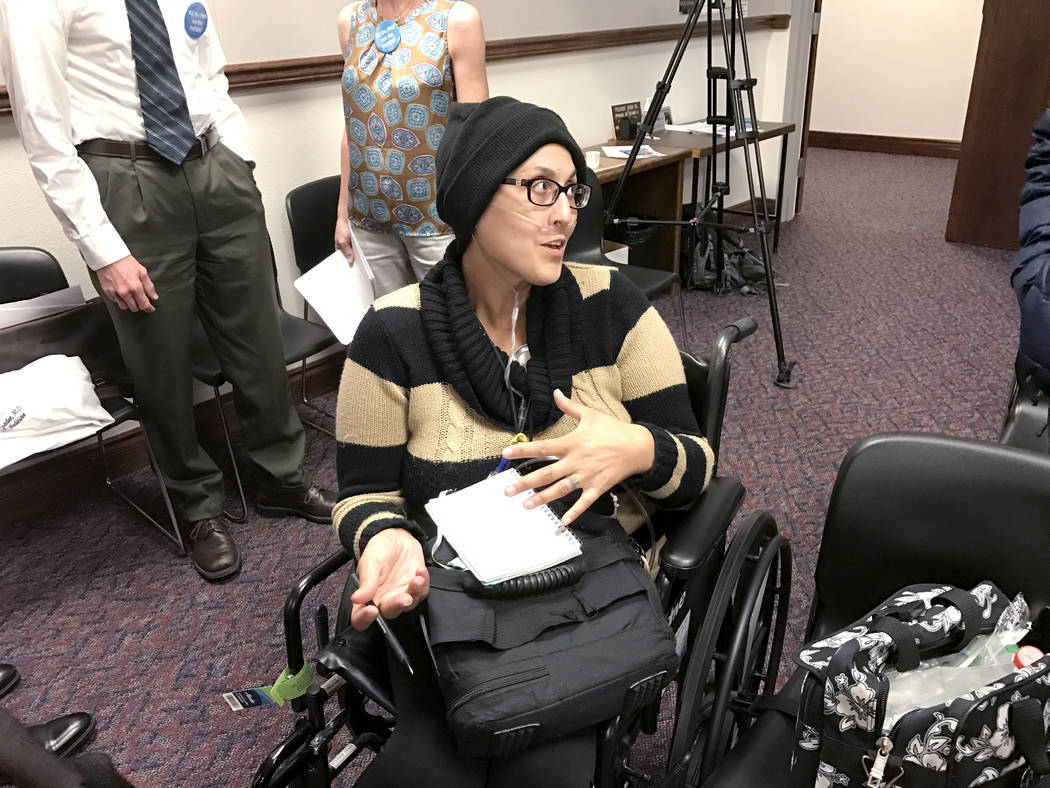 Stephanie Packer, a 34-year-old mother of four, talks with reporters after a press conference Wednesday, April 12, 2017, in Carson City. Packer, who has a terminal lung disease and is undergoing chemotherapy, said her insurance company informed her it would no longer cover her expensive medications, but would cover assisted-suicide drugs. (Sandra Chereb/Las Vegas Review-Journal)

Doctors, patients and lawyers, many wearing buttons that read “Kill the Pain not the Patient,” said the measure was dangerous and a “profound and dramatic change in public policy.”

The bill was scheduled for a hearing Wednesday before the Senate Committee on Health and Human Services but was pulled from the agenda just hours before the meeting was to begin. Friday is the deadline for bills to be passed out of committee or die.

Sen. David Parks, D-Las Vegas, a primary sponsor of the bill, said he requested an exemption from the deadline and expected a hearing in the coming weeks.

The bill allows a patient over 18 years old to request life-ending drugs if their conditions are terminal and likely to result in death within six months. At least two doctors would have to verify the diagnosis. The patient must be a Nevada resident and mentally competent to make the life-ending decision. It would also require the patient be able to self-administer the drugs.

Callister and other physicians, including Sen. Joe Hardy, R-Boulder City, scoffed at the notion a doctor can accurately predict how long someone will live.

Stephanie Packer, a 34-year-old California woman with multiple health issues, said she was diagnosed in 2005 with Lupus, a chronic autoimmune disease that can damage skin, joints and organs.

Another doctor then diagnosed her with pulmonary fibrosis and told her she had about three years to live.

Over the years, she’s had teams of doctors, Packer said, and has taken numerous medications to treat her condition and pain.

After California enacted assisted suicide, the mother of four said her insurance company informed her they would no longer cover her expensive medications. But she could obtain life-ending drugs for a co-payment of $1.20.

“End of life care is the most expensive care of all,” Packer said.

Dr. Peter Fenwick echoed other physician critics who said the bill would mandate they lie on death certificates by listing the cause of death as the underlying condition instead of an overdose of lethal drugs.

“Killing somebody is murder,” Fenwick said. “Assisted suicide is just a nice word for killing.”

Margaret Dore, a lawyer in Washington state, said the bill would have dire consequences. Besides encouraging people who may have years or decades yet to live to give up on life, it does not consider relatives or others who may pressure someone into voluntary suicide for nefarious reasons.

“Assisting persons can have their own agendas: an adult child wanting an inheritance; a financial predator seeking financial gain; or a doctor wanting to hide malpractice,” she said in a statement.

“The bill, if passed, will create he perfect crime,” she said.