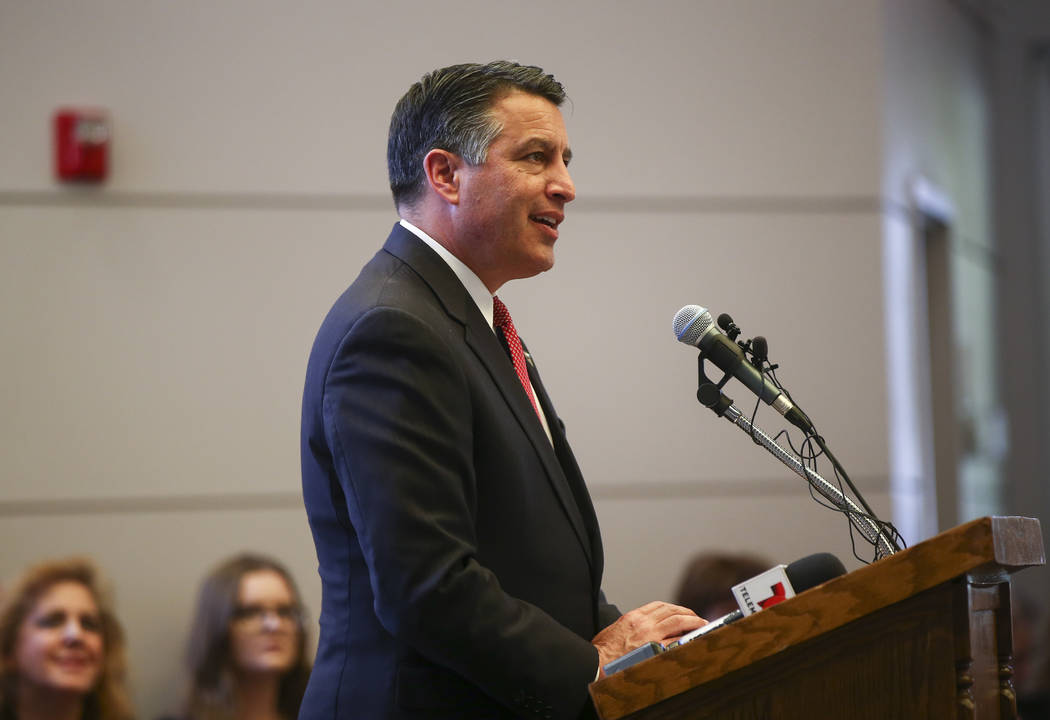 CARSON CITY — In a stunning act of defiance, Senate Republicans walked out and Democrats proceeded to vote Thursday on a bill that could have major ramifications on the next Nevada budget.

The showdown over education savings accounts and the Nevada budget erupted on the Senate floor when the body twice rejected along party lines a bill to tax recreational marijuana.

The political blowup came with just days remaining in the 2017 session, and the governor has not said whether he would veto a budget without ESA funding. The session must end by midnight Monday.

A budget veto would throw the session into overtime and special session because Democrats do not have the two-thirds majorities necessary to override a veto by Gov. Brian Sandoval, who has made ESA funding a priority.

Republicans, who passed the law in 2015 but did not have a legal funding mechanism, have repeatedly vowed to vote against any budget without funding for the program. It is designed to allow parents to tap taxpayer dollars to help pay for private school tuition or other alternative education options.

Minority Leader Michael Roberson, R-Henderson, who met with Sandoval after the marijuana votes, said he’s doing what he vowed before the session began.

“I said back in January, no ESA’s, no budget,” he said. “So yes, I’m voting against the budget bills.”

The measure has been at the heart of the session and the focus of contentious negotiations. Sandoval proposed $60 million for the program in his two-year budget that would begin July 1.

Senate Bill 487, which includes Sandoval’s proposed 10 percent tax on recreational marijuana, failed on a 12-9 vote. The bill requires a two-thirds majority, or 14 votes, to pass.

After failing the first time, Senate Majority Leader Aaron Ford, D-Las Vegas, asked that the measure be reconsidered. Before the second vote, Ford said voters approved recreational marijuana in November in part on the promise it would “create a financial windfall for public education.”

“There is no good reason to oppose this bill,” Ford said on the floor. “If we don’t pass this bill, we create a hole in our budget.”

But Republicans made good on a promise to oppose any budget without ESA funding.

All nine Republican senators walked out of the building and met with Sandoval across the Capitol complex, but Democrats convened in their absence and approved Senate Bill 544, the Distributive School Account, on a 12-0 vote, with independent Sen. Patricia Farley of Las Vegas joining them.

GOP senators returned to the chamber and defeated Senate Bill 546, the 2017-2019 Capital Improvement Projects measure, which requires 14 votes for passage.

Assembly Republicans followed suit in their floor session, when the house passed the major general fund budget bill on a 25-14 party-line vote. The Assembly did not vote on the education budget because it did not have the amendment, but will likely do so Friday.

No final budget votes can be made until the education budget is finalized.

Both the marijuana tax and capital projects bills could be reconsidered in the coming days.

There was lots of finger pointing in the aftermath.

“Over the past several weeks we have attempted to maintain an open dialogue and good-faith negotiations with Republicans working towards what we hoped could be a bipartisan compromise on education funding. Unfortunately, time and time again Republicans have undermined these discussions by moving the goalposts and refusing to meet us halfway,” Ford and Democratic Assembly Speaker Jason Frierson said in a joint statement.

“Our Democratic majorities in both chambers have said loud and clear from day one that we believe in keeping public dollars in public schools. We continue to have deep concerns about how diverting public money to subsidize wealthy families would weaken our education system and threaten our children’s future.”

It added, “It’s our sincere hope that the Republicans will not play politics with this critical school funding.”

“Senator Ford failed once again as a leader,” Roberson said. He declined to elaborate on the substance of his meeting at Sandoval’s office, calling it private conversation.

Of the money that would be raised from the marijuana tax, Roberson said it’s a “pretty small part of the overall budget. It’s a minuscule part of the budget, actually.”

Sandoval, in a statement said he was “disappointed in the result and believed we had been negotiating with Democratic leadership on ESAs and their priorities in good faith.”

“I understand why the Republicans voted against the marijuana tax and any suggestion that their actions were anti-education is not correct,” the governor said.

Assembly Republican leadership maintained Democrats backed out on a deal reached hours earlier, though Democrats denied a compromise was reached.

“As of several hours ago, we had come to an agreement on the future of the (ESA) program and had looked forward to closing out the session in a bipartisan fashion,” Assembly GOP leadership said in a statement. “Democrats have completely reneged on promises made. That is unacceptable to us, and to our caucus.”

After the floor session, Ford told the Review-Journal he doesn’t know what a compromise would be, but stressed he’s willing to talk.

“What it would be, I couldn’t tell you,” he said. “Is there always an opportunity to talk in my book? Absolutely.

“My door’s been open the entire time, but time is of the essence for us and we have to make decisions for the people of the state of Nevada who sent us here to represent them and not to play partisan politics and games over a $60 million voucher program that’s for rich people.”

Ben Botkin contributed to this report.