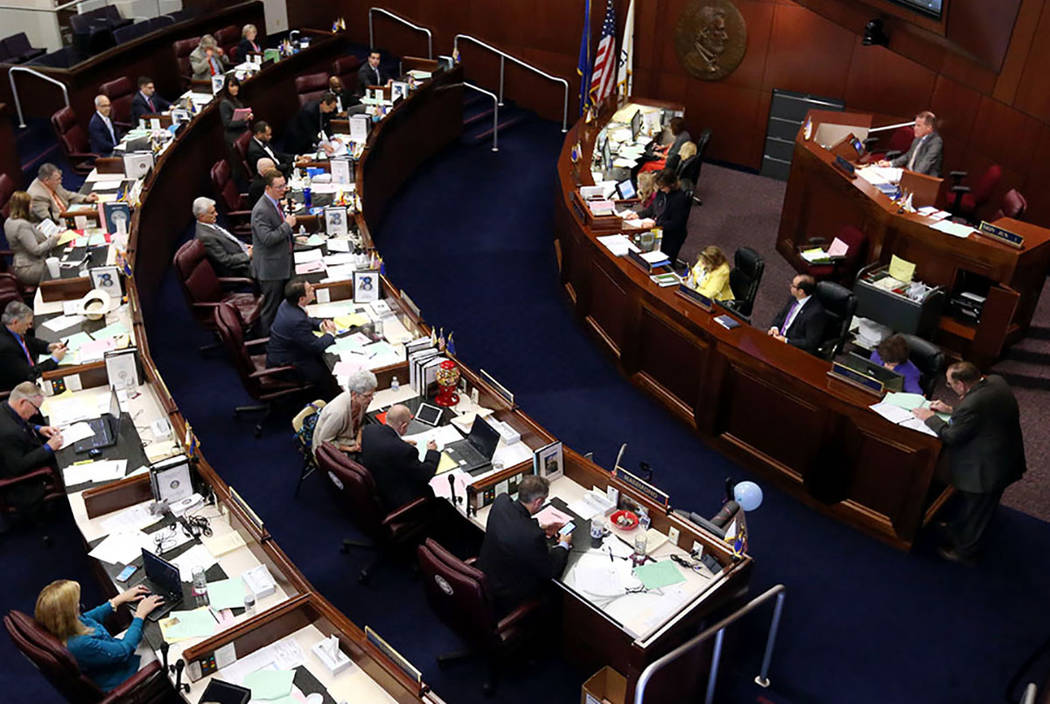 The Nevada Senate works in the final hours of the session at the Legislative Building in Carson City, Nev., on Monday, June 1, 2015. (Cathleen Allison/Las Vegas Review-Journal)

CARSON CITY — For the most part, the 2017 session of the Nevada Legislature has not been one to foster open government.

Bills have run the gamut and had mixed results, as the Legislature has considered proposals dealing with government transparency, accountability, lobbying, campaign finance and even an inspector general to investigate government agencies.

Some measures have fared better than others, but the session will do little to improve Nevada’s poor standing as a transparent state for open government.

The nonpartisan Center for Public Integrity and Global Integrity’s 2015 report ranked Nevada 46th in the nation for accountability and open government laws.

“I don’t think it’s been the session of great government transparency, but we will keep trying to have the sunshine session and make it our goal every legislative session,” said Holly Welborn, policy director and lobbyist for the American Civil Liberties Union of Nevada.

Senate Bill 170 proposed requiring government agencies to respond to requests by a firm deadline, rather than having the option of five days to provide records or giving a date the records will be available. The bill also sought to limit the cost of records requests, including no charge for those in the public’s interest.

“We do need to refine our public records law, and we were very close to coming to an agreement,” Welborn said.

But the most ambitious public records bill of the session died without a vote.

Welborn said the ACLU will continue working with local government agencies and others for a solution after the session ends.

Senate Bill 384 is moving through the Legislature, but it proposes less transparency.

That bill would close off the names of government retirees who get public pensions. Supporters say it’s necessary for privacy reasons to prevent identity theft, while open-government advocates say there is no evidence that keeping retiree names public is harmful.

The bill passed the Senate 11-10 and faces a vote in the Assembly after passing the lower chamber’s Government Affairs Committee with a 9-4 vote last week.

Lawmakers are weighing legislation to partially reverse a law passed in 2015 that banned lobbyist gifts to lawmakers.

Assembly Bill 396, which would allow lobbyist gifts up to $20, unanimously passed the Assembly.

Meanwhile, a bill that would have strengthened the ban on gifts from lobbyists died without a hearing.

Senate Bill 380 would have stretched the ban beyond the statehouse to include local government officials.

Senate Minority Leader Michael Roberson, R-Henderson, sponsored the 2015 bill banning gifts for lawmakers and this session’s dead bill that would have extended the ban to local government.

“I had assumed the Democrats’ votes were for sale. I just didn’t know they’d admit it only took $20 to buy them off,” he said.

Barry Smith, executive director of the Nevada Press Association, told the Las Vegas Review-Journal this session’s level of public records-related bills is similar to what he’s observed in prior sessions.

“Every session, there are a few more examples where someone wants to make government more secret,” he said.

Smith and the ACLU’s Welborn are the two most consistent voices in the Legislature for government openness. Often, they’re the only ones in committee hearings offering that perspective.

Ultimately, the First Amendment, a vigorous press and an inquisitive public are necessary to watchdog the government, Smith said. “That’s why we’re always there in the fight anytime there’s a bill” impacting open government, he said.