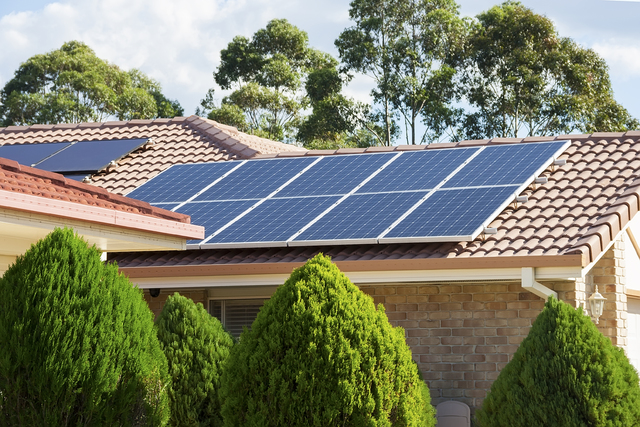 Photovoltaic panels like the ones on this home’s rooftop generate electric power by using solar cells to convert energy from the sun. (Thinkstock)

CARSON CITY — A bill seeking to reestablish the rooftop solar industry in Nevada appeared headed for approval after a Senate panel on Friday amended and unanimously passed the measure.

Assembly Bill 405 as amended would provide a net metering credit of 95 percent of the retail electricity rate, defined as what the customer would have been charged by the utility for each kilowatt hour generated by the rooftop system.

The bill was amended and passed unanimously by the Senate Commerce and Labor Committee. It now goes to the full Senate for a vote. It would then return to the Assembly for a vote on the change. Then it would go to Gov. Brian Sandoval, who said recently he is supportive of the effort to bring the rooftop solar industry back to Nevada.

Alex McDonough, vice president of public policy for the rooftop solar company Sunrun, said in a statement: “The unanimous support gained in the Senate today reflects the hard work and compromise that went into this bill. We’re confident that in the little time that remains, legislators will move quickly to support this bill and restore the jobs and clean energy that the solar industry brings to Nevada.”

The amended bill includes an introduction saying the bill is necessary for the immediate reestablishment of the rooftop solar market in Nevada both for job creation and the development of renewable energy.

Rooftop solar companies view AB405 as a shot at restoring their fortunes, which plummeted after state utility regulators adopted less generous payments for the excess electricity starting in 2016.

The bill would also provide protections for consumers who want to purchase rooftop solar systems and participate in net metering, a process in which homeowners are reimbursed by a utility for the excess electricity they generate.