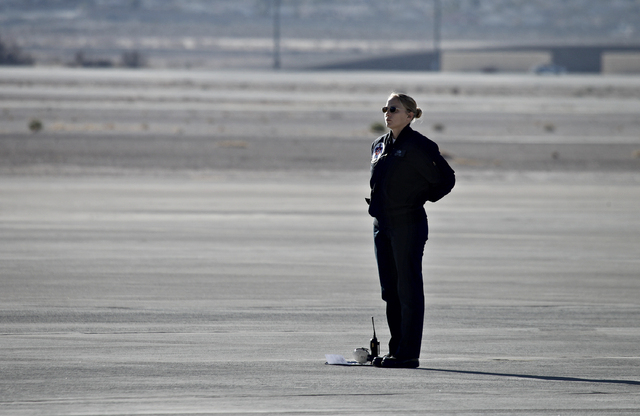 Tech Sgt. Amanda Geray watches as the Thunderbirds start up their engines at Nellis Air Force Base in Las Vegas Jan. 10, 2014. Geray is the first female line chief in the history of the Thunderbirds. (John Locher/Las Vegas Review-Journal) 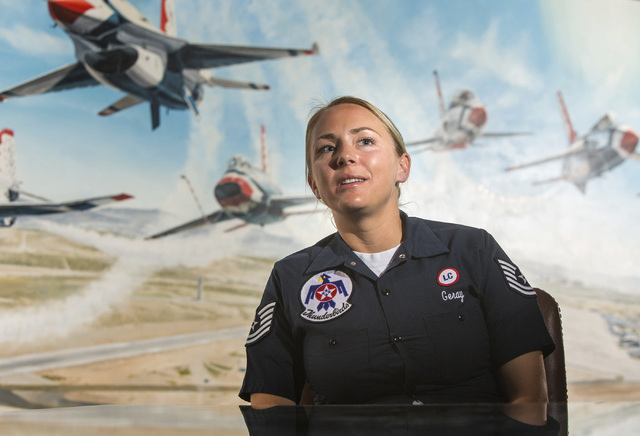 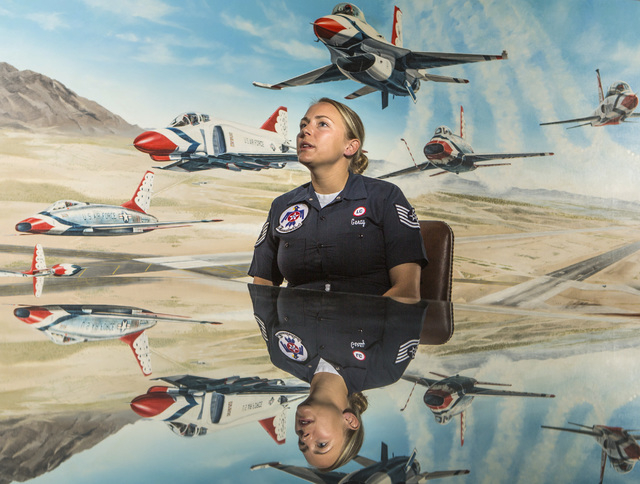 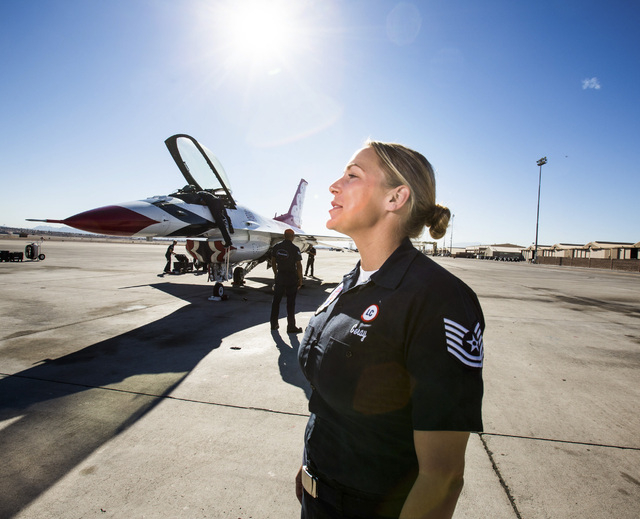 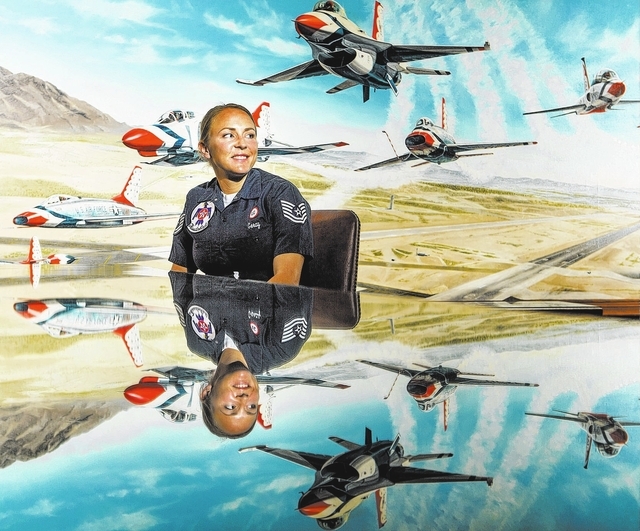 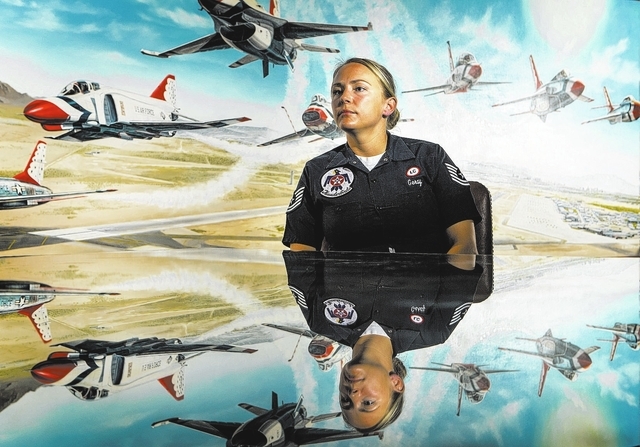 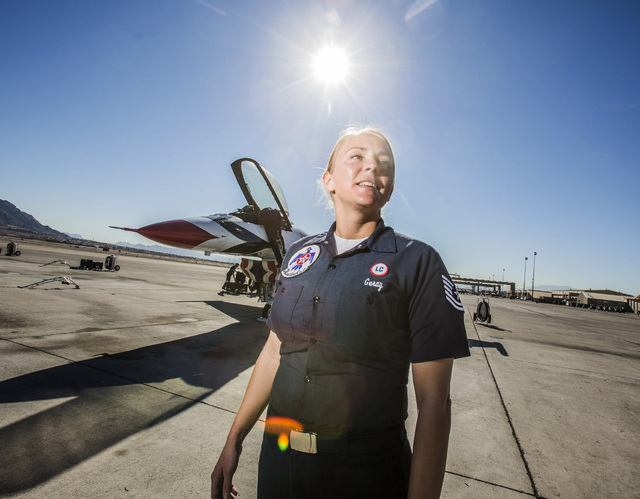 The Thunderbirds team at Nellis Air Force Base is at the top of the world when it comes to showcasing the Air Force’s flying feats. So it makes sense that the team’s line chief is from North Pole, Alaska.

Tech Sgt. Amanda Geray, the first female line chief in the team’s 61-year history, was an Army brat when she decided to join the Air Force to become an aircraft maintenance specialist a year after graduating from North Pole High School with the class of 2001.

“It was the wanderlust to travel,” she said about her Air Force ambitions while the team practiced in mid-January, preparing for its 2014 season. “I was outgrowing my town.”

So joining the Air Force meant leaving the quaintness of North Pole behind.

“There are Christmas decorations up on the main strip all year round,” she said, describing the two-stoplight town with “a couple gas stations. Pretty much in high school it was lots of bonfires and football games.”

Now she works with the bright lights of Las Vegas glowing year-round off in the distance at the end of the runway. And the “Strip,” well, it’s more than two stoplights and a couple of gas stations.

As line chief, she stands at parade rest in front of the red-white-and-blue F-16 Fighting Falcon jets, supervising the ground crew preparing them for takeoff, and ensuring against safety issues.

“I’ve always thought my job was the coolest job in the Air Force, maybe the world, because it really is,” she said. “We are essentially ambassadors, showing our capabilities, and our professionalism, and the pride we have in doing our jobs.”

With safety first and foremost, she knows what to look for, having been a behind-the-scenes maintainer with the team since March 2011.

“Sometimes jets just don’t want to cooperate,” she said, explaining how her crew reacts to a three-code system when the pilots “squawk” 10 minutes before landing how the planes are handling. A “Code One” means there are no defects to deal with, whereas a “Code Three” means they have to hustle or that jet won’t fly.

“I have to make sure I have the right person with the right knowledge at the right spot at the time we talk to the pilot to make sure we’ve got a good handle on what the actual defect is.”

What does it take to be on the Thunderbirds team?

“It is really about work ethic,” Geray said. “You don’t have to be the best maintainer, but you have to be willing to work and learn and put in long hours to ensure that you are working to the best of your ability.”

This year she is one of 10 women on the team, including No. 3 right-wing pilot, Maj. Caroline Jensen.

Geray is focused on the ground crew so each airman knows where to be and when to be there in launching and landing the jets. The responsibility includes ensuring the jets are fueled and mechanically ready, and the 20 to 30 airmen working under her are doing their jobs as efficiently and quickly as possible with flare and precision from the second the chocks are removed from the aircrafts’ wheels until the minute they land, taxi and park.

“We really need to have the United States know their military, and we just can’t invite them to watch the day-to-day missions that we do,” she said. “So this is the best way for them to get to know our military and realize that we are the girl next door and the boy from down the street, working together professionally to protect and serve our country.”

At the end of the season schedule with 38 events around the country and many twin-bill weekend performances, the team will have appeared before hundreds of thousands of spectators. The grand finale at Nellis on Nov. 8 and 9 is expected to draw more than 100,000. The 2012 Aviation Nation open house at Nellis was the largest free-admission event in the state attracting a crowd of 135,000 who contributed $19 million to the local economy.

Last year, the season was cut short because of automatic budget cuts in the wake of the sequester law aimed at reducing the nation’s staggering debt.

“Everybody was gung-ho, and we were ready to go,” she said. “Then when it got cut short. A lot of us were disheartened. A lot of us were pretty down. We ended up making the most of it, but we’re really excited we end up getting a full season this year. We’re just glad to be back.”

So what does it mean to see the spectators, the aviation buffs, the kids and grown-ups craning their necks to watch the Thunderbirds perform?

“I’ve never felt like a rock star until I was on this team. I’m not going to lie,” she said. “And being able to show our Air Force to the rest of the country, and have people that are so in love with what we do is totally humbling.