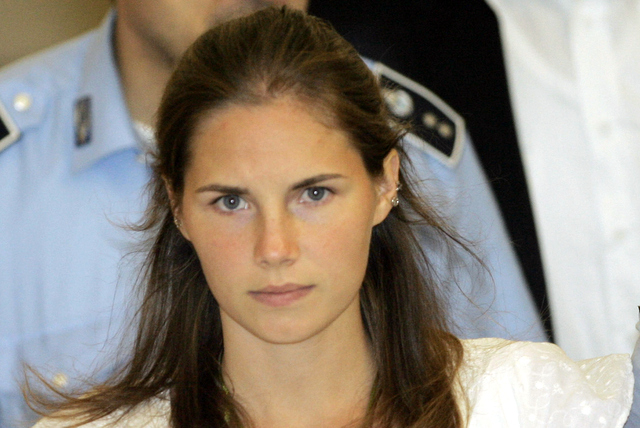 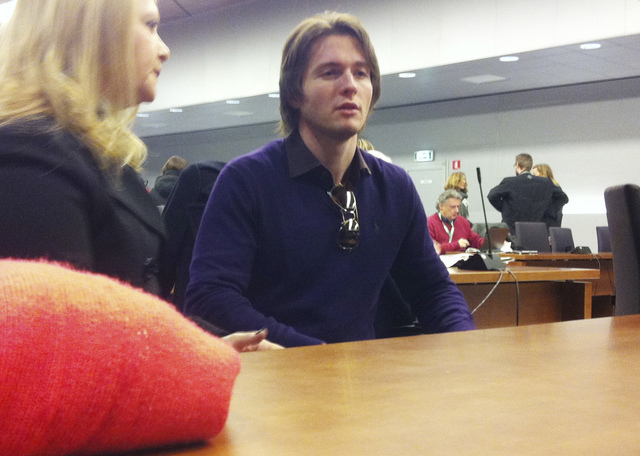 Raffaele Sollecito talks with his stepmother, Mara Papagni, prior to the start of the final hearing before the third court verdict for the murder of British student Meredith Kercher, in Florence, Italy, Thursday, Jan. 30, 2014. (AP Photo/Fabrizio Giovannozzi) 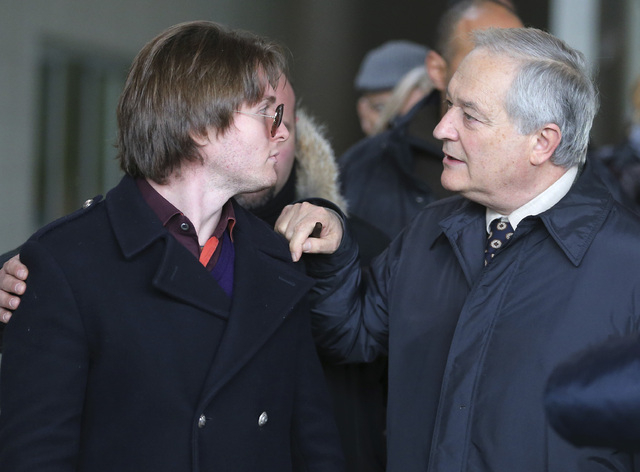 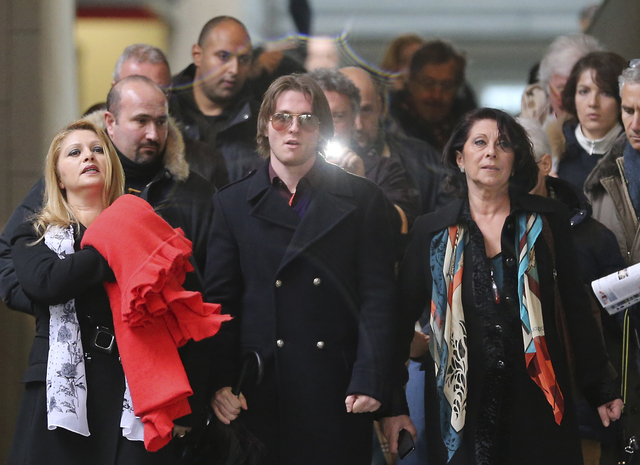 Raffaele Sollecito is flanked by his stepmother, Mara Papagni, left, and his aunt Sara Achille, right, as he leaves the final hearing before the third court verdict for the murder of British student Meredith Kercher, in Florence, Italy, Thursday, Jan. 30, 2014. (AP Photo/Antonio Calanni) 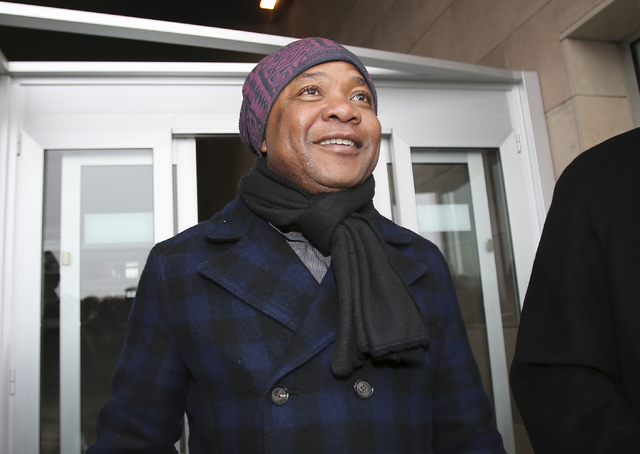 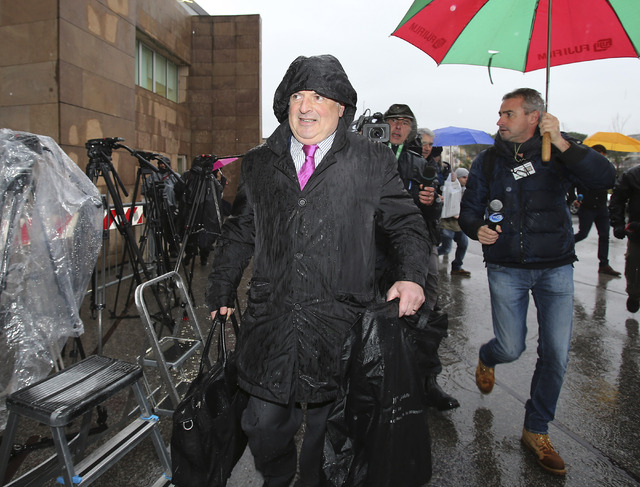 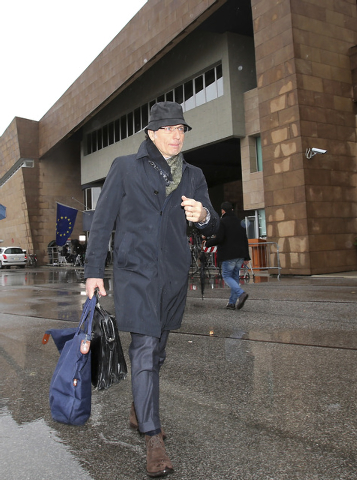 Francesco Maresca, lawyer for the Kercher family, arrives for the final hearing before the third court verdict for the murder of British student Meredith Kercher, in Florence, Italy, Thursday, Jan. 30, 2014. (AP Photo/Antonio Calanni)

FLORENCE, Italy — An appeals court in Florence on Thursday upheld the guilty verdict against U.S. student Amanda Knox and her ex-boyfriend for the 2007 murder of her British roommate. Knox was sentenced to 28 1/2 years in prison, raising the specter of a long legal battle over her extradition if the conviction is confirmed.

Lawyers for Knox and her co-defendant, Raphael Sollecito, vowed to appeal to Italy’s highest court, a process that will take at least another year and drag out a legal saga that has divided court watchers in three nations.

In a statement from Seattle, where she had awaited the verdict at her mother’s home, Knox said she was “frightened and saddened” by the decision. She said it was “unjust” and the result of an overzealous prosecution and narrow-minded investigation that worked to “pervert the court of justice.”

“This has gotten out of hand,” she said. “Having been found innocent before, I expected better from the Italian justice system.”

After nearly 12 hours of deliberations, the court reinstated the guilty verdicts first handed down against Knox and Sollecito in 2009 for the death of Meredith Kercher. Those verdicts had been overturned in 2011 and the pair freed from prison, but Italy’s supreme court vacated that decision and sent the case back for a third trial in Florence.

Kercher, 21, was found dead Nov. 2, 2007 in a pool of blood in the bedroom of the apartment she and Knox shared in the central Italian city of Perugia, where both were studying. Her throat had been slashed and she was sexually assaulted.

Knox and Sollecito, who had just started dating a few days earlier, were arrested within the week. A third defendant, Rudy Guede of Ivory Coast, was convicted in a separate trial and is serving a 16-year sentence for the murder.

Knox and Sollecito maintained they were at Sollecito’s apartment the night of the murder, smoking marijuana, watching a movie and making love.

A statement from Knox after the ruling appeared less aimed at persuading Italy’s highest court to find her innocent in the upcoming appeal than at rallying supporters in the U.S. to resist a possible extradition request if the conviction is upheld.

Experts have said it’s unlikely that Italy would request Knox’s extradition before the verdict is final. If the conviction is upheld, a lengthy extradition process would likely ensue with the U.S. State Department ultimately deciding whether to turn Knox back over to Italian authorities to finish serving her sentence.

Mary Fan, a former federal prosecutor who teaches at the University of Washington Law School in Seattle, said any decision by the State Department is “a matter of both law and politics.”

“The U.S. courts don’t sit in judgment of another nation’s legal system,” Fan said. Nevertheless, “Many Americans are quite astonished buy the ups and downs in this case, and it’s the U.S. that will ultimately be making the call about whether to extradite.”

U.S. Senator Maria Cantwell, a Democrat from Knox’s home state of Washington, said she was “very concerned and disappointed” by the verdict and was confident the appeal would re-examine the decision.

“It is very troubling that Amanda and her family have had to endure this process for so many years,” she said in a statement. “I will continue to closely monitor this case as it moves forward through the Italian legal system.”

Knox’s attorney, Carlo Dalla Vedova, said he had called Knox by telephone and informed her that the Florence court had not only confirmed the guilty verdict, but had increased the sentence from the original 26 years.

“She was petrified. Silent,” he said.

Sollecito was in court Thursday morning, but didn’t return for the verdict. Sollecito’s lawyers said they were stunned by the conviction and Sollecito’s 25-year sentence and would appeal.

“There isn’t a shred of proof,” attorney Luca Maori said.

Attorney Giulia Bongiorno said she had thought the appeals trial had gone in her client’s favor. “I don’t think there can be a written ruling that justifies this verdict,” she said.

Presiding Judge Alessando Nencini ordered Sollecito’s passport revoked but made no requests for Knox’s movements to be limited, saying she was “justifiably abroad.”

Kercher’s brother and sister were in the courtroom for the verdict, and said the outcome was the best they could have hoped for.

“It’s hard to feel anything at the moment because we know it will go to a further appeal,” said her brother, Lyle Kercher. Asked if he was satisfied, he said: “No matter what the verdict was, it never was going to be a case of celebrating anything.”

In his closing arguments, Knox’s lawyer, Dalla Vedova, had told the court he was “serene” about the verdict because he believes the only conclusion from the files is “the innocence of Amanda Knox.”

“It is not possible to convict a person because it is probable that she is guilty,” Dalla Vedova said. “The penal code does not foresee probability. It foresees certainty.”

Dalla Vedova evoked Dante, noting that the Florentine writer reserved the lower circle of hell for those who betrayed trust, as he asserted that police had done to Knox when they held her overnight for questioning without legal representation and without advising her that she was a suspect.

Knox had returned to Seattle after spending four years in jail before being acquitted in 2011. In an email to this court, Knox wrote that she feared a wrongful conviction.

The first trial court found Knox and Sollecito guilty of murder and sexual assault based on DNA evidence, confused alibis and Knox’s false accusation against Patrick Lumumba, a Congolese bar owner, which resulted in a slander verdict that has been upheld on final appeal. A Perugia appeals court dismantled the guilty verdict two years later, criticizing the “building blocks” of the conviction, including DNA evidence now deemed unreliable by new experts, and the lack of motive.

Italy’s highest court ordered the third trial in a scathing dismissal of the appeals court acquittal, ordering the examination of evidence and testimony it said had been improperly omitted by the Perugia appeals court as well as addressing what it called as lapses in logic.

Courts have held that Guede, a small-time drug dealer originally from Ivory Coast who had previous convictions for break-ins, did not act alone.