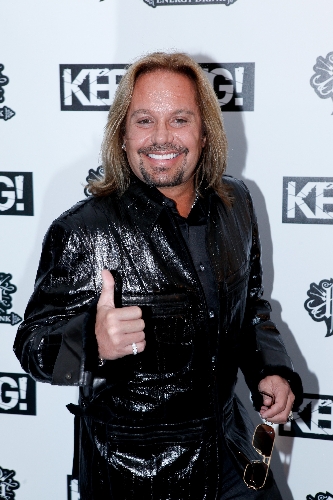 The bankruptcy attorney for Motley Crue frontman Vince Neil is suing the rock star for failure to pay about $16,000 in legal fees and costs.

Neil’s latest legal issue comes on the heels of his arrest on suspicion of drunken driving after attending the Daytime Emmys show at the Hilton in late June.

He was pulled over in his Lamborghini on Desert Inn Road, minutes after leaving the Hilton. Prior to being stopped by police, he is reported to have been involved in altercations with two women in the hotel’s valet area. Both women are alleged to have been photographing Neil.

Neil unsuccessfully attempted to grab a video camera from a woman who was covering the event, Vegas Confidential has learned. He approached the other woman, grabbed her camera and
threw it on the pavement, destroying it.

Neil, who is reported to have split with his wife, Lia, drove away with a woman identified as Catherine Brown.

A Catherine Brown of Las Vegas was among 20 women vying for rocker Bret Michael’s affection in VHI’s reality show “Rock of Love 2” in October 2007.

Neil is scheduled to be arraigned Sept. 27 in the drunken driving case.

Stephen Hopcraft of Seablue restaurant at MGM Grand was eliminated from Bravo’s Season 7 of the “Top Chef” reality show on Tuesday. The judges gave him low marks for his Brazilian flank steak with beans and rice.

Social House, a former sushi hot spot at Treasure Island, is back in business after a change of address. The Pure Management Group operation opened June 30 after moving to Crystals at CityCenter. Former Nobu chef Joe Elevado has added some of his Filipino specialties to the menu, including a must-try crackling pork shank with garlic/chili vinegar.

“The president is 49 years old, but it’s never a good sign when your age is higher than your political approval rating.” — David Letterman