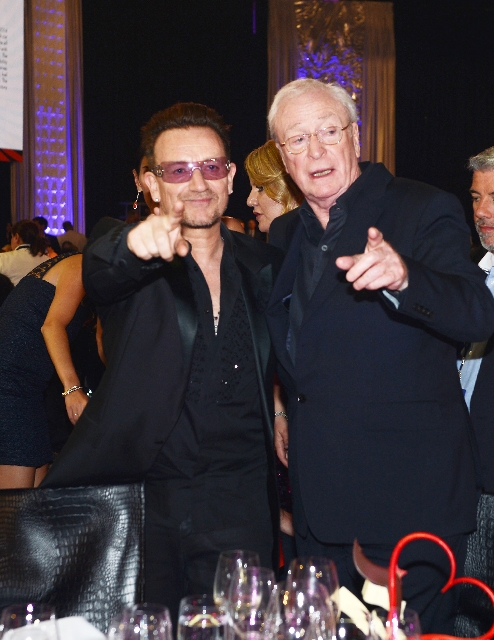 Bono enjoyed a moment with Michael Caine at the Keep Memory Alive/Power of Love benefit gala Saturday at the MGM Grand Garden.

Barbra Streisand didn’t make it but there was plenty of A-list starpower to light up the night Saturday at the 17th Keep Memory Alive/Power of Love benefit gala at the MGM Grand Garden.

The evening’s co-honorees Sir Michael Caine and music legend Quincy Jones were greeted out of the gate with U2’s Bono channeling Frank Sinatra during a medley of “I’ve Got You Under My Skin” and “Fly Me to the Moon.”

Organizers quickly let the media know it was the first time Bono performed a Sinatra song in public.

While Streisand wasn’t on hand, as advertised in early promotions, Oscar winner Jennifer Hudson belted a stirring version of “Somewhere” from “West Side Story.” Streisand did her version in 1985.

It was a big night for music artists banding together to pay tribute.

James Ingram and Patti Austin teamed up for a power duet of “How Do You Keep the Music Playing.”

Snoop Dogg joined Jason Derulo, Season 6 “American Idol” winner Jordin Sparks and Siedah Garrett for a Michael Jackson tribute. Derulo and Sparks, who are dating, sang for the first time onstage during “Man in the Mirror,” which was co-written by Garrett.

Chaka Khan sang an inspired version of the theme song from “Alfie,” Caine’s 1966 breakthrough film before he went on to win Oscars for “Hannah and Her Sisters” and “The Cider House Rules.”

Whoopi Goldberg slipped in a marijuana joke, asking the black-tie crowd, “Where are Sheila G’s brownies for grown-ups?”

Supermodel Cindy Crawford had ’em blushing with an off-color pie joke. During the live auction for lunch or dinner with Crawford and her husband Rande Gerber, Crawford chirped she would even “make a pie” after hearing the starting bid of $50,000.

“Then you can say you had Cindy Crawford’s pie,” Crawford said via the mic.

Their close friend, Hollywood heartthrob George Clooney, took the cake for highest dinner bid during the night, a whopping $200,000.

Billionaire Steve Wynn helped his longtime friend and event organizer Larry Ruvo by offering a week aboard his 200-plus-foot yacht on the French Riviera.

After the winning bid of $650,000 was announced, Ruvo said Wynn agreed to a second package for the same price, a gesture that added more than $1 million to the evening’s total.

Proceeds of the event go to Ruvo’s pet project, the Cleveland Clinic Lou Ruvo Center for Brain Health. The final tally won’t be available for a day or two.

The evening ended with the incredible talent lining up on the front of the stage for “We Are the World,” which Jones helped produce in 1985 to benefit African famine relief.

Miss Alabama USA 2012 Katherine Webb, with girlfriends in a luxury bungalow at Encore Beach Club (Wynn) and later dining at Andrea’s restaurant in Encore. Her stay included photo shoots at each venue. … Roseanne Barr, in the audience at Andrew Dice Clay’s show Saturday at Vinyl at the Hard Rock Hotel.

“A new report claims that almost half of Justin Bieber’s 37 million Twitter followers are fake. Even more disturbing: The other half is real.” — Conan O’Brien