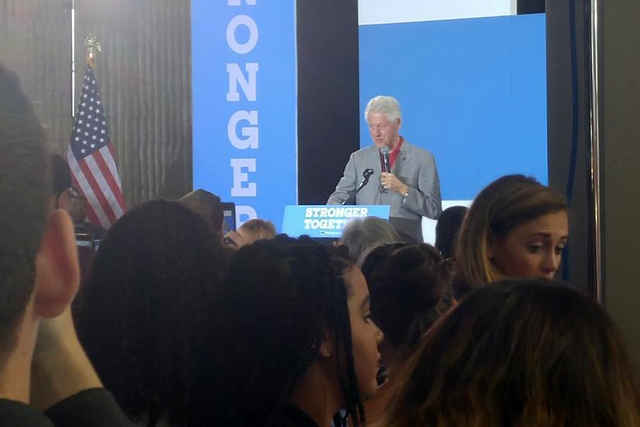 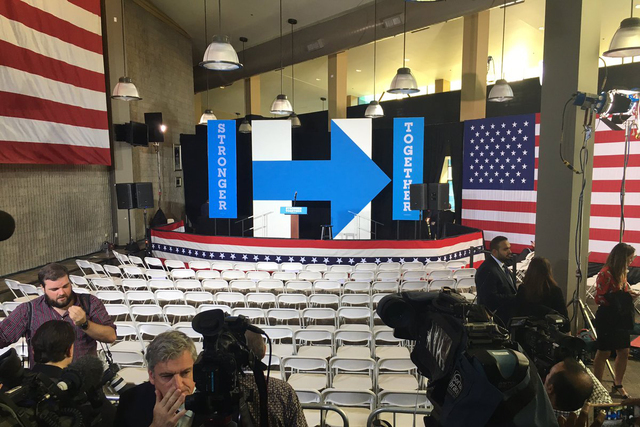 Packed risers as supporters and media wait for Bill Clinton at Hillary Clinton's campaign event at the College of Southern Nevada in Las Vegas. (@WilsonElaineM/Twitter) 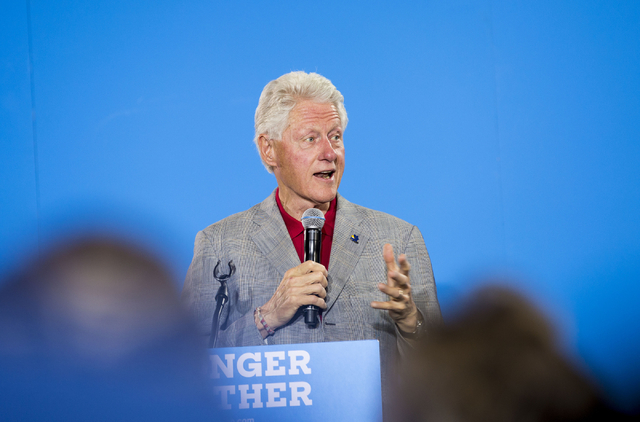 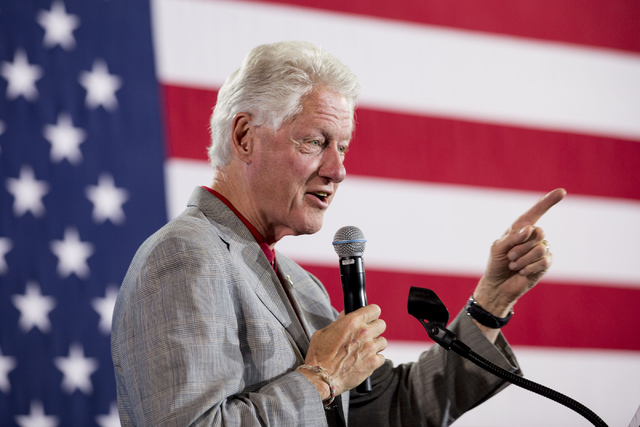 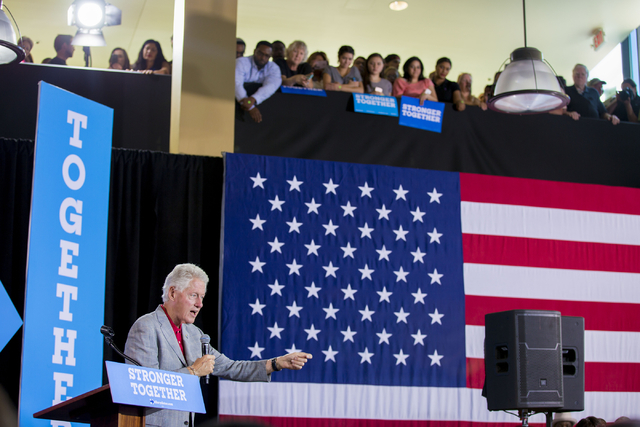 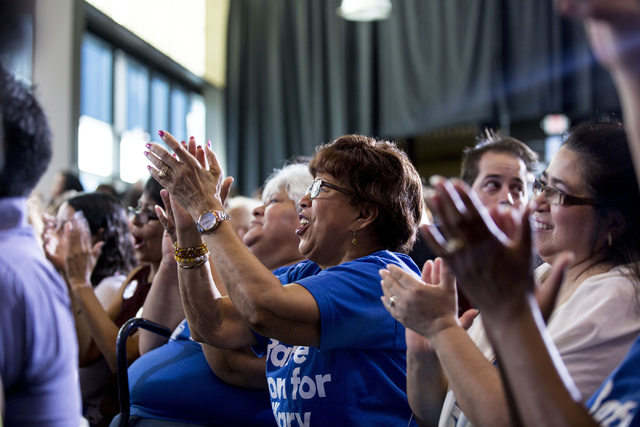 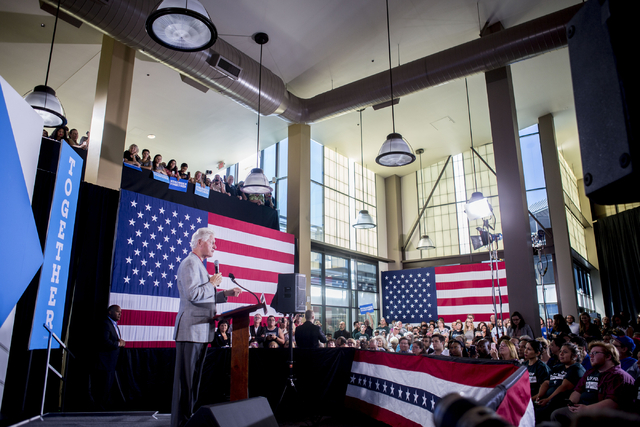 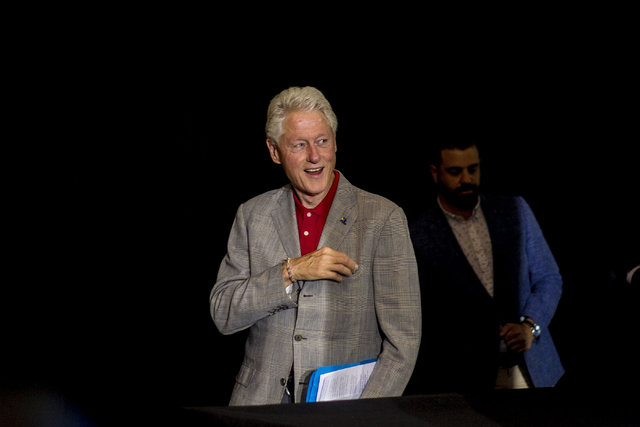 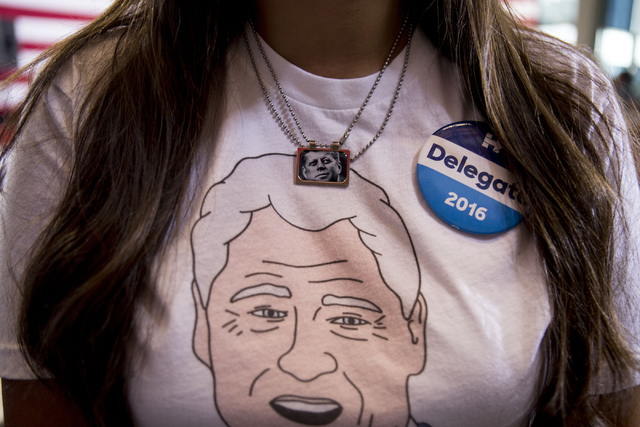 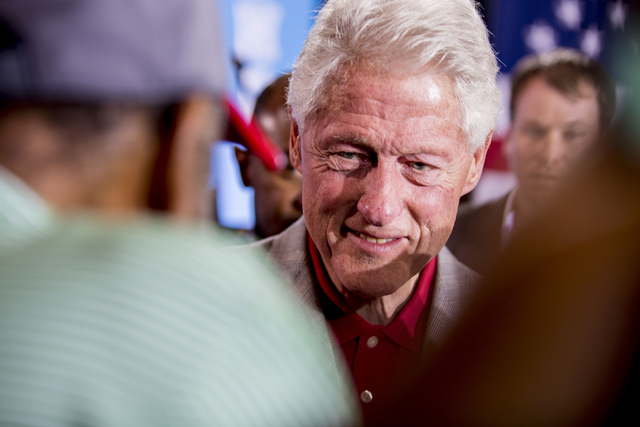 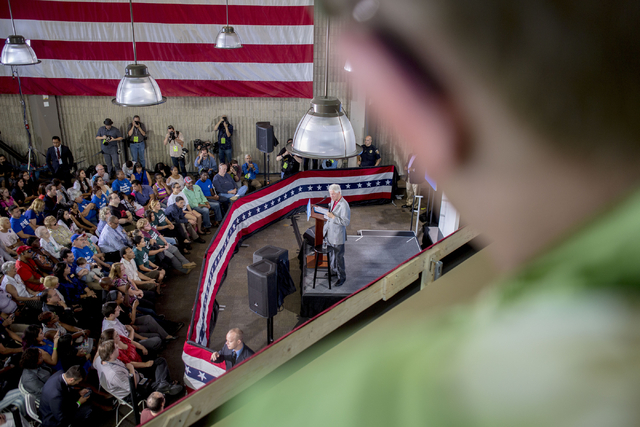 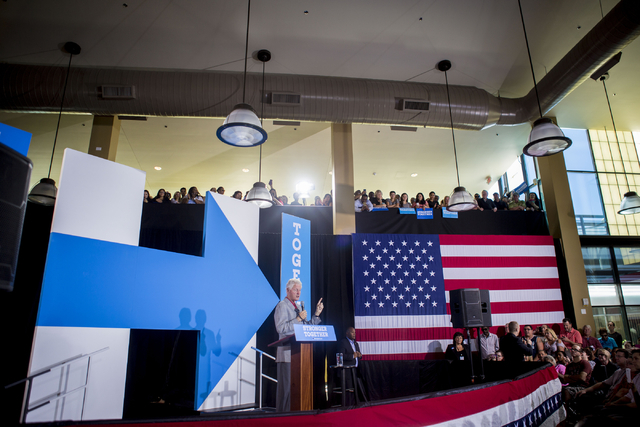 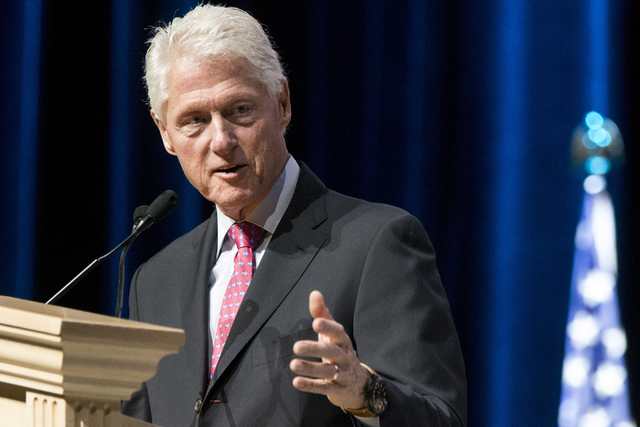 He said Hillary’s economic plan would make it easier for small businesses to get loans and create jobs by investing in infrastructure.

“You’ve got a clear choice here,” Clinton told a crowd of about 450 people at the College of Southern Nevada’s Cheyenne Campus. “This election is about your future.”

The speech, which lasted just under an hour, resonated with Larry Shepherd, a retired casino dealer.

“He got what he needed to get across,” Shepherd, 70, said. “He just pointed out the big differences between the two (candidates).”

Clinton filled in for his wife after the Democratic presidential nominee, former first lady and secretary of state became overheated at a 9/11 ceremony on Sunday in New York. Her campaign also has disclosed she had pneumonia. She’s due back on the campaign trail Thursday.

Clinton made light of his wife’s recent illness, characterizing it as the flu.

“Last time I checked, millions of people were getting it every year,” he said.

Bill Clinton encouraged his audience to not only vote, but register others as well.

“The election’s about you,” he said. “It’s the one day of the year you get to be the boss.”

“This is one state that everybody predicts to be close because it always has been and you can make the difference,” Clinton said.

Clinton highlighted specifics of his wife’s plan. For example, people starting small businesses could defer student loans for three years while they get their ventures off the ground. Companies that participate in internship and job training programs, and share profits with employees would get lower tax rates, he said.

“We need to put the pedal to the metal,” he said, pointing to a new federal report showing median household incomes grew for the first time since 2007. “We don’t need to reverse it.”

The news on loans was music to Nataly Ramos’ ears. The 23-year-old is an out-of-state student at UNLV and has about $25,000 in student debt.

Ramos, a daughter of Mexican-American immigrants, wants to open her own Mexican restaurant after graduation.

“It’s important to me that I’m able to financially do that,” she said.

“I want him to grow up in a country where he has opportunities,” he said of Preston. “I don’t want him to struggle with student loan debt when he goes to school.”

A key part of Hillary Clinton’s economic plan is to invest in new infrastructure to replace aging roads, bridges and sewer lines. The former president said infrastructure investments are what America needs, not building a wall along the border with Mexico, as Trump has suggested.

Clinton said his wife supports comprehensive immigration reform and a pathway to citizenship for undocumented immigrants.

“The worst thing we could do would be to try to break up 11 million people,” he said.

Hillary Clinton will be a uniter, he said.

“What Hillary wants to do is to tear the totem pole down and let us all go forward together,” Clinton said.

Clinton urged voters to not be blinded by “road rage” at the polls.

“I think you should choose answers over anger,” he said.

Clinton dismissed the idea that Trump or anyone could return America’s economy to its state 50 years ago. He attacked the Republican presidential nominee as self-serving and having a history of outsourcing jobs.

Cynthia Ameli, a retired pharmacist, was first in line at 8 a.m. to attend the speech. It’s about the 12th Clinton campaign event where she had been first in line since 2015.

“I want to be up close and personal,” said Ameli, 58. “These are historical, once-in-a-lifetime events.”

Ginger Washington, lined up about 40 people behind Ameli, waited to show her support for Hillary Clinton.

“The Republicans right now are too divisive,” the 56-year-old said. “Their candidate right now doesn’t morally line up with the way I was raised and the way I raised my children.”

Austin Krehbiel is too young to vote now, but he’ll be 18 in October.

The College of Southern Nevada High School student said he plans to vote for Donald Trump. Still, he couldn’t miss the opportunity to hear a former president speak and gain insight on Hillary Clinton’s platforms.

“I don’t think I’ll be persuaded by the rally, but I’m willing to listen,” he said. “It’s very likely she’ll become president … It’s going to influence my life a lot, so it’s important to see what they’re saying.”

Trump’s campaign issued a statement ahead of Clinton’s arrival.

“Bill Clinton’s visit to Nevada couldn’t come at a worse time, right on the heels of Hillary letting her guard down at a Wall Street fundraiser to tell fat-cat donors that she views half of this country’s voters — including veterans, police officers, firefighters and other hard-working Americans — as either ‘deplorable’ or ‘desperate,’” Charles Muñoz, Trump’s Nevada state director, said in a statement. “Nevadans have one question for the former president — does he agree with his wife that half of us in the Silver State are deplorable or desperate?”