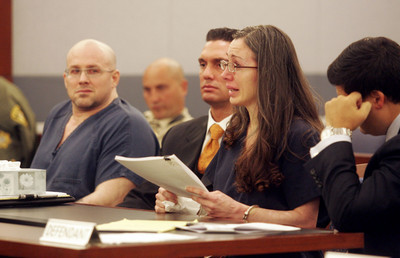 Former Mr. Olympia competitor Craig Titus and fitness guru Kelly Ryan were once known as champions of the bodybuilding world. But they’ll now be remembered for their roles in the slaying of their personal assistant, Melissa James.

During a tearful hearing in District Court on Friday, Titus was sentenced to spend 21 years to 55 years in prison for killing James.

Ryan, his wife, was sentenced to six years to 26 years for her role in the slaying.

James, 28, was found burned beyond recognition in Ryan’s torched Jaguar in December 2005. Authorities said she had been beaten, shocked with a Taser and injected with morphine.

With his broad shoulders shaking and tears streaming down his face, Titus, 43, told District Judge Jackie Glass that he accidentally killed James during a drug-fueled fight but never meant to take her life.

"Things got carried out of control," he said. "My intentions were never to hurt Melissa. I am ashamed and I am sickened by my actions after Melissa passed away."

Ryan, 36, who sobbed uncontrollably, said, "I’m truly, truly sorry. I ask forgiveness of both this court and Melissa’s family."

Glass didn’t believe the couple was sorry for the killing. She described the lengths to which they went to destroy James’ body, which included wrapping her head with duct tape, binding her and burning her so badly authorities had to use DNA to identify her.

"The tears are crocodile tears," Glass said of their displays of emotion.

After the plea agreement was reached, Titus was interviewed by local television stations and said he pleaded guilty in part to help his wife, who could have faced murder charges if the case went to trial.

On Friday, Titus continued to shift responsibility to himself, saying that he had complete control of the situation and that Kelly’s biggest problem was listening to him.

James’ mother, Maura, didn’t take any comfort from his words. "Craig Titus will never have anything to say that I want to hear unless he accepts responsibility and is truly remorseful for brutally killing Melissa," she said.

Before the slaying, Titus and Ryan were known as world-class bodybuilders. Titus is a past place-winner in the international Mr. Olympia competition and was described by author and former Review-Journal reporter Glenn Puit as a "human machine of muscle" in his book on the slaying. Ryan, a Ms. Olympia runner-up who once wanted to be a Laker Girl, is a former Ms. Fitness America.

"She (Ryan) has to live with her decisions for the rest of her life," he said.

County prosecutor Robert Daskas said Titus and Ryan initially told police James stole their car. But police later found surveillance video from a Wal-Mart from the morning of the killing showing Ryan pushing a cart filled with seven bottles of lighter fluid and a barbecue set. The footage also showed Titus helping Ryan place the purchases into the back seat of the car. It’s believed James was in the trunk at the time.

"What they did was unspeakable," he said.

The couple fled Las Vegas and were eventually arrested near Boston. After their arrest, Titus told police that he found James dead in the Jaguar from an overdose. He and Ryan destroyed the body because he was afraid bad publicity would destroy their career.

But on Friday, Titus’ attorney Marc Saggese said the killing occurred after Titus defended Ryan from James during a fight. Saggese said James, who had been using drugs that night, turned on Titus and attacked him several times before she fled into her bedroom at the couple’s house. Saggese said the couple heard crashing noises coming from James’ room and then silence. They then found her dead.

"He had no premeditation," Saggese said. "It was an act of defense."

The sentencing didn’t end smoothly. Saggese confronted Glass after she sentenced Titus to 21 to 55 years in prison, saying that she had previously agreed to sentence him to no more than 17 years to 55 years. Glass disputed Saggese’s recollection of the agreement and upheld Titus’ sentence.

After the hearing, Saggese said he would speak to Titus today at the jail to see if Titus wants to withdraw his plea and go to trial. "Mr. Titus put pen to paper and signed that guilty plea agreement under the auspices that he’d be receiving 17 to 55 years with no variation," he said.

Daskas said they should be cautious. "Titus better be careful what he wishes for," he said.