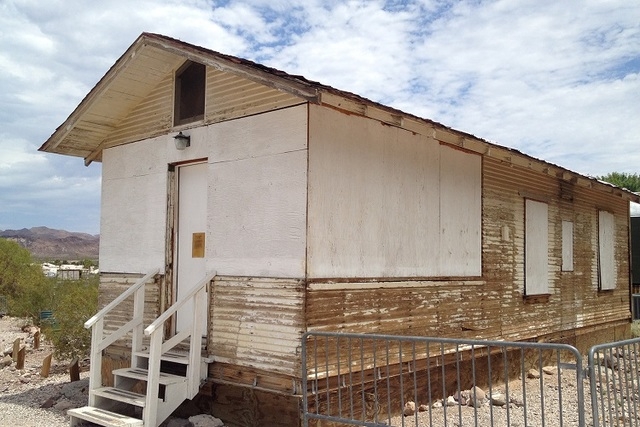 They were two of Boulder City’s most well-known residents, but there isn’t much left at Henry and Ocie Bradley’s historic address atop a hill near Avenue I.

The house that once stood at 618 Arizona St. was hauled away more than a decade ago and now resides with its windows boarded up at the Clark County Museum on Boulder Highway in Henderson, where it awaits restoration.

The building was first used as a ticket office for aviator Glover “Roxy” Ruckstell’s Grand Canyon Airlines at the old Boulder City Airport in the mid-1930s. Then in 1938, the shack was moved up the hill to Arizona Street, where it became home to the first black family to live in the city that Hoover Dam built and that built Hoover Dam.

The Bradleys, who documents show were originally from the Carolinas, first came to Boulder City from Los Angeles and worked for Ruckstell’s Grand Canyon-Boulder Dam Tours in the mid-1930s, according to Nevada State Museum Director Dennis McBride.

Henry Bradley was a chauffeur for the tour company and became a close friend of Ruckstell. Ocie Bradley made lunches for the flights to the Grand Canyon.

“Roxy Ruckstell really forced the community to let them live there, and he got a lot of resentment for that,” Clark County Museum Director Mark Hall-Patton said.

According to Hall-Patton, only 61 black people worked on the construction of Hoover Dam, but those who were fortunate enough to find work on the project were not allowed to live in Boulder City. City manager Sims Ely saw to that.

McBride said it was Ely’s job to keep Boulder City — a government-built town that remained a federal reservation for decades after the dam was finished — “clean, green and white.”

“He just made sure that nobody was allowed in that wasn’t supposed to be there,” McBride said. “It was his way or the highway.”

But Ruckstell went head-on with Ely when it came to the Bradleys. He would not be bullied by the city’s famously dictatorial manager.

It didn’t hurt that Ruckstell was a successful entrepreneur heavily involved in the community. “Roxy said, ‘They’re working for me. They need to live here, and they’re going to live here. And if you think you’re going to stop them, you’re not,’ ” Hall-Patton said.

But while the Bradleys were well-liked by some residents, like many black families across the country at that time, they were not made to feel welcome by many in the white community.

“They were not treated very well, and it only became worse in Boulder City,” McBride said.

Those who knew them said the Bradleys didn’t let the overt racism get to them.

In oral histories recorded by McBride, early Boulder City residents described Henry Bradley, whom some called “Hank,” as a big man who greeted visitors with his famous smile and deep, friendly voice. Ocie Bradley was remembered as a “warm-hearted” woman who loved to cook.

The Bradleys’ home was basic, not unusual for its time and place — approximately 450 square feet with two walls that separated the living room from the bedroom.

“This was a shack, but this was also a time when people were living in tents,” Hall-Patton said. “So, it’s not like they only got a shack. They had a home.”

The house was damaged in a fire in 1939 that police said was caused by defective wiring and ruled accidental.

An article published in the Las Vegas Evening Review-Journal said the Bradleys spent approximately $1,200 to build a new home on the corner of New Mexico Street and Avenue G.

They eventually left Boulder City in the 1940s to live out their lives in Los Angeles, McBride said. Henry Bradley, who had been suffering from stomach ailments, died in 1947 at age 51, according to an article published in the Boulder City News. Records show that Ocie Bradley died in 1977 at age 81.

The original Bradley house — the one damaged in the fire — was moved to the Clark County Museum in 2002. Hall-Patton said it will be restored and added to the museum’s Heritage Street exhibit as soon as there is enough funding in place to pay for the work. As of now, there is no timetable for when the restoration will start.

“Twelve years isn’t the longest one we’ve had to wait on (a project),” he said. “The whole point is that it’s worth saving.

“This isn’t just the black story in Boulder City, this is part of everybody’s story. There’s a story here that needs to be told.”