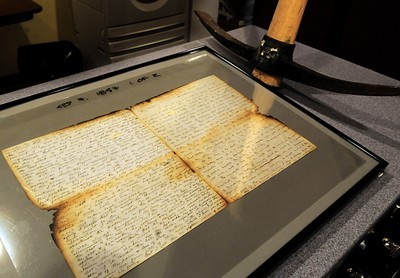 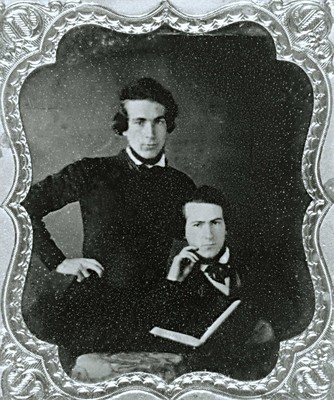 RENO — Brothers Hosea and Ethan Allen Grosh were jubilant in the summer of 1857 after they discovered a “monster ledge” of silver in the mountains of present-day Nevada.

The sibling-prospectors’ never prospered from the find, however. In fact, both went to early graves without realizing they were on the verge of locating one of the world’s greatest bonanzas: a massive, underground pocket of silver and gold known as the Comstock Lode, about 20 miles southeast of Reno.

But their sad story has a new and brighter final chapter.

Historians say the real treasure trove is more than 80 letters, recently acquired by the Nevada Historical Society, that the brothers wrote from Nevada and California mining camps from 1849 to 1857.

The letters are among the most important Gold Rush-era documents to surface because of their rich detail about life on the frontier, said Fred Holabird, president of Reno-based Holabird-Kagin Americana, one of the country’s largest sellers of Western Americana.

“In quality and content, those letters rank among the very best for telling what life was like back then. It wasn’t for the weak-hearted or the weak-bodied,” Holabird said.

A century and a half later, the correspondence also documents the obscure tragedies of two devoted, hardworking brothers who experienced the worst luck.

The sons of a Universalist minister in Marietta, Pa., the Grosh brothers arrived by ship in San Francisco in 1849 to find a tent city “growing like a mushroom,” full of grog shops and gamblers.

But they faced problems from the start in the West, suffering from dysentery soon after arriving. Both were ill off and on until the end eight years later. Like most 19th century prospectors, they endured hardship and continual setbacks and never struck it rich.

“By February we will probably have either our certain fortune, or make a complete failure. Things look very bright & promising,” they wrote.

But just when their hopes were highest, Hosea Grosh died in September 1857 of an infection after striking his foot with a pick near present-day Virginia City. That winter, his brother died near Auburn, Calif., of complications of frostbite after being caught in a Sierra Nevada snowstorm.

“The universe conspires, doesn’t it? It really has little regard for us people,” said Grosh descendant Charles Wegman of Haskell, N.J. “Sometimes the roll of the dice doesn’t roll in your favor.”

Wegman, 47, a great-great-great grandson of the Groshes’ brother, Warren, stunned historians by disclosing the letters’ existence in 1997. In April, the Nevada Historical Society celebrated the end of a 10-year fundraising effort to purchase them for $210,000.

Kenneth Owens, a professor emeritus of history at California State University, Sacramento, said it’s extremely rare for historical documents to turn up after such a long time.

“I can’t think of a collection of letters from the Gold Rush era that large and detailed. They are really exceptional.”

The letters survived two structure fires a century apart in the East. While they were protected in metal boxes, the heat singed most letters and destroyed a few lines in some.

The poignant letters about the brothers’ deaths read like a Hollywood script, Holabird said.

“I take up my pen with a heavy heart, for I have sad news to send you,” Ethan Grosh wrote to his father, A.B. Grosh, in a Sept. 7, 1857, letter. “God has seen fit in his perfect wisdom & goodness to call Hosea, the patient, the good, the gentle to join his Mother in another & a better world.

“I thought it most hard that he should be called away, just as we had fair hopes of realizing what we had labored for so hard for so many years.”

“I have no words that will describe our feelings of grief and sorrow at the news contained in the (letter). I read only the first lines, and feeling utterly unable to control my feelings or voice, uttered the words, ‘Hosea is dead!’ and … retired to our room, whither Mother soon followed me, and we wept long and sadly together,” he wrote, referring to his second wife; the sons’ mother had died.

“Oh, how often have we mourned over your united failures, disappointments and misfortunes; and hoped, almost against hope, that the tide might yet turn, and bring you both back again, to our arms.”

Just two months later, Ethan Grosh would be dead after he and a companion, Maurice R. Bucke, spent about two weeks trapped in the snowbound Sierra.

In a letter from Last Chance, Calif., Bucke wrote of their ordeal, saying they buried themselves in snow to keep from freezing.

“I said to Allen that we might as well lay there until we died, but he said that as long as he could crawl he would not give up … On the 10th (Dec. 10, 1857) the miners from Last Chance came up and hauled us down on sleighs to this place … (The doctor) did not get here until the 19th it was then too late poor Allen died a little while after he got here …”

Historians believe the Grosh brothers struck silver on a branch of the Comstock Lode, though their deaths kept them from cashing in. Their find was a precursor of other discoveries that led to the main lode in 1859, said Guy Rocha, Nevada’s state archivist.

“Their discovery suggested that perhaps there was even more mineral riches than anyone had thought in the area,” Rocha said.

Eric Moody, curator of manuscripts for the Nevada Historical Society, praised Wegman for selling the letters for below their 1998 appraised value of $228,000.

Wegman said he could have offered the letters to Eastern universities, but he wanted them to go “home” to an institution that would make them more accessible to scholars. The Nevada Historical Society plans to publish them.

“This is my family’s legacy,” said Wegman, a graphic artist for a label printer.

“These brothers worked so hard for so little return; and to end up in such a Greek tragedy, it’s just absolutely amazing to me.”