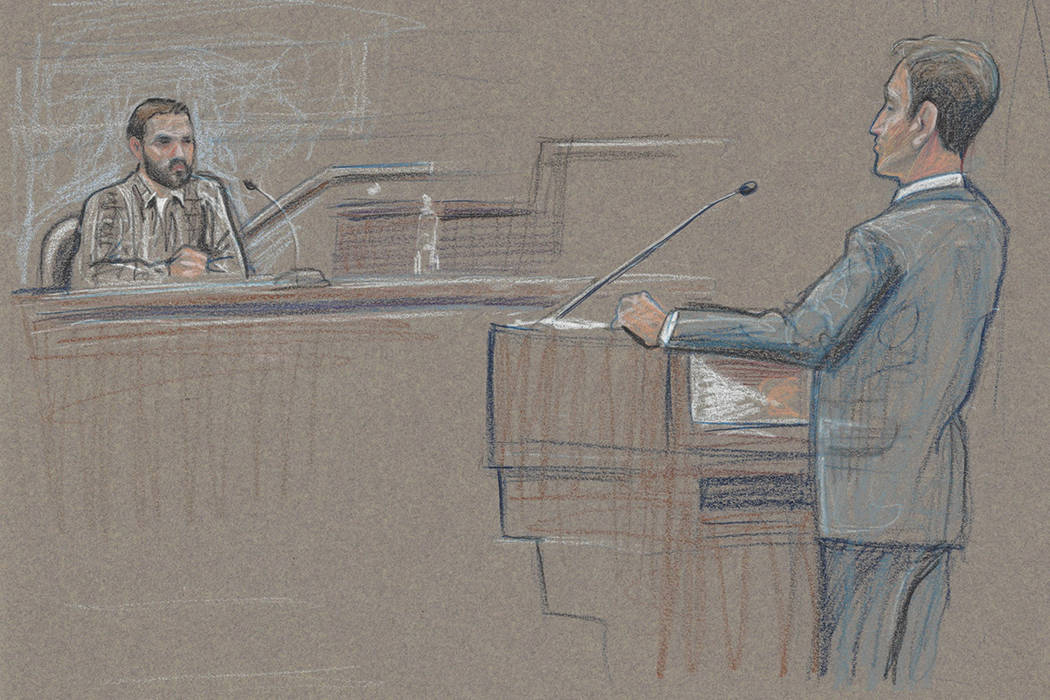 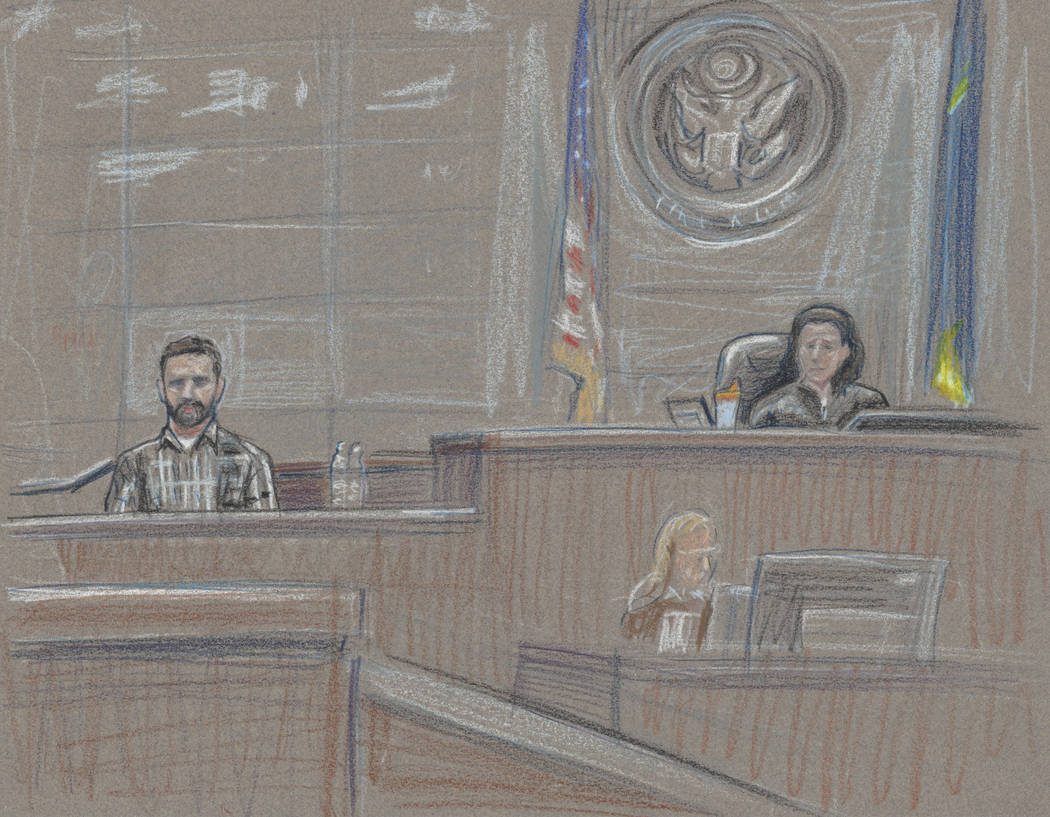 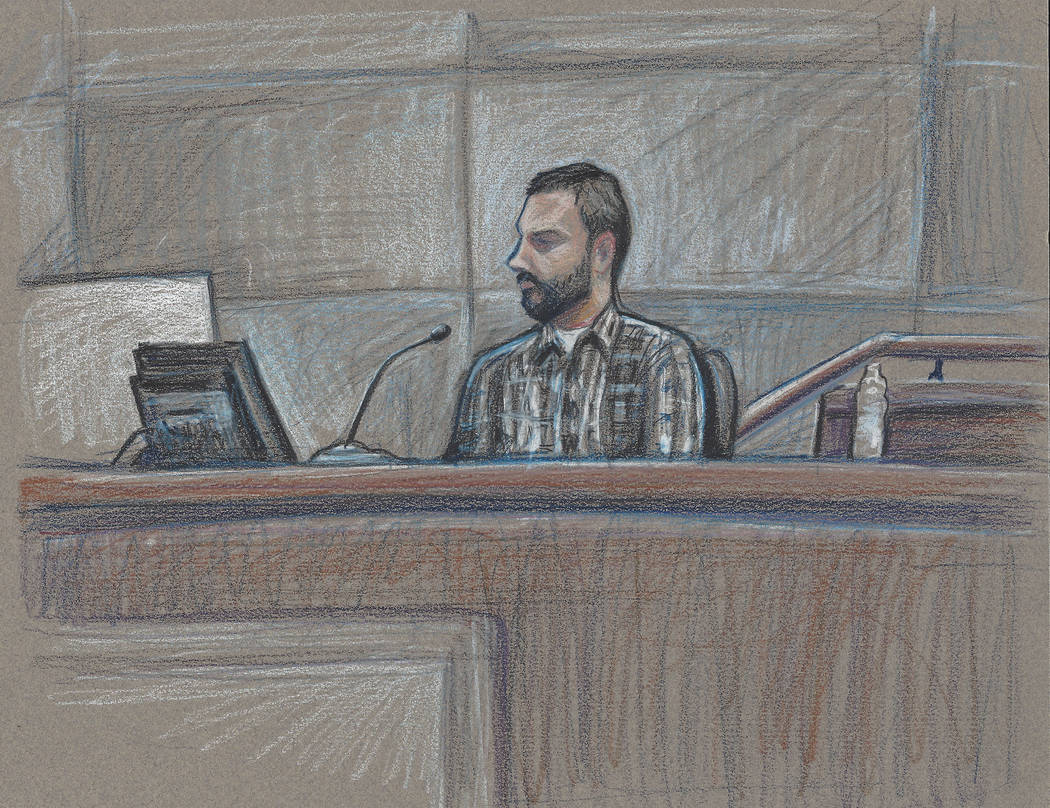 Idaho gun enthusiast Eric Parker banked on his commitment to self-defense Thursday when he stepped to the witness stand and tried to convince jurors he played no role in a conspiracy to bully federal agents into abandoning their roundup of hundreds of rancher Cliven Bundy’s cows.

“I didn’t care about the cows,” said Parker, 33, who is one of six people charged as “gunmen” in the 2014 armed standoff in Bunkerville. During the standoff, Parker was photographed pointing a long gun through a jersey barrier on the Interstate 15 overpass that overlooked the sandy ditch where protesters were face-to-face with federal agents.

Parker said he arrived at the highway bridge thinking he was going to watch Bundy’s cows get released. Protesters were told at a morning rally that the Bureau of Land Management — after day’s of clashes with the rancher’s supporters — decided to abandon its operation to impound cattle from public land.

As his defense lawyer, Jess Marchese, displayed the photo of him pointing his gun from the highway overpass, Parker testified tearfully: “I made a decision. I didn’t want to hurt anybody, but I also didn’t want to see those people get hurt in the wash.”

Marchese asked Parker why he brought his gun and joined the protests if he did not care about the BLM’s cattle roundup.

“They were hurting people. I tell my kids that you have to stand up for your neighbor, and you have to be there for each other. And if I don’t do that, then I’m a hypocrite,” said Parker, a father of two who worked as an electrician before he was indicted on federal charges for his actions in Bunkerville.

The defendant was on the witness stand for five hours Thursday, and much of his testimony focused on his decision to drive 13 hours to Bunkerville with his two friends, Scott Drexler and Steven Stewart, who are being tried on the same charges.

Parker told jurors that in the days leading up to the standoff, as protesters were clashing with BLM agents in Bunkerville, he saw several videos and photos on social media that alarmed him.

A middle-aged woman being tackled to the ground by law enforcement officers. The bruised face of one of Bundy’s sons who was arrested during the protests. A video of BLM agents using a stun gun and police dogs on another one of Bundy’s sons. A cordoned off “First Amendment” zone in the middle of the desert. An April 8, 2014, press release issued by Gov. Brian Sandoval in which he declared: “No cow justifies the atmosphere of intimidation which currently exists nor the limitation of constitutional rights that are sacred to all Nevadans.”

Parker told jurors that above all, his perception that constitutional rights were being violated led him and his friends to drive to Bunkerville on April 11, 2014.

Federal prosecutors argue that after Sandoval’s press release, the BLM adjusted its approach to the cattle impoundment operation and, for example, took down the First Amendment area that was erected to contain protesters. But the Bundys’ calls for support from militia groups already had spread like wildfire on social media — and led hundreds of loosely organized, self-described militiamen to set up camp in Bunkerville.

Assistant U.S. Attorney Nicholas Dickinson, in cross-examination, tried to portray Parker as a member of one of those militia groups, highlighting his actions and Facebook posts to suggest he helped orchestrate a mass assault on law enforcement.

After the morning rally on April 12, 2014, Parker posted to Facebook: “Bundy gave the sheriff one hour to disarm the BLM. He did not reply. We are now going to free the cattle by any means. The sheriff claimed that the BLM is standing down but offered no proof. This is when Mr. Bundy gave him the, ‘do it or else.’ We will not be lied to.”

Dickinson got Parker to concede that much misinformation is spread on social media, and that his research in the days preceding the standoff may not have given him an accurate or complete picture of the events in Bunkerville.

“You saw that there were calls for militia, and people with guns. … To match force with them you needed to bring a gun?” Dickinson asked.

“I thought they were a lot less likely to drag my face into the ground,” Parker testified. Later, he said, “I was armed so nobody hurt me.”

Dickinson had not finished his cross-examination when court adjourned Thursday. Parker is scheduled to take the witness stand when the trial resumes Monday.