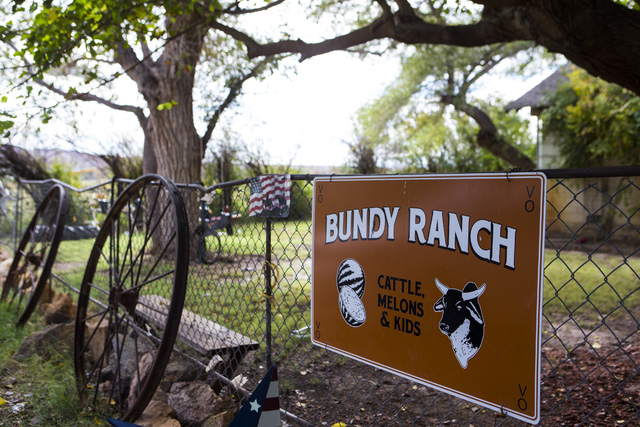 Prosecutors trying the case against six of rancher Cliven Bundy’s supporters played hours of video footage this week that gave the public a peek into the minds of federal law enforcement officers as the 2014 confrontation with armed protesters unfolded in Bunkerville.

When Bureau of Land Management Agent Mark Brunk testified early in the week, prosecutors played dash cam footage that recorded him uttering an expletive, followed by, “You come find me and you’re gonna have hell to pay.”

Another agent laughed, and replied, “Pretty much a shoot first, ask questions later kind of thing.”

The statements were made after a crowd of hundreds of cowboys and supporters arrived at Toquop Wash, a sandy ditch that served as the headquarters for the court-ordered cattle roundup that sparked the protests. The protesters had traveled 5 miles, by horse and by car, from a morning rally where Bundy — upon learning the government was ceasing its operation — ordered supporters to go get his cows.

The conversations among law enforcement grew more serious as officers scanned the crowd for guns, and the footage captured their frantic conversations. First they didn’t notice any long guns. Then they saw two. Then at least five. Then 10.

“If we get any more guns, we’re gonna be outgunned,” a law enforcement officer remarked at one point.

The footage captured expressions of fear and humor, and some of the government’s witnesses testified that their jokes and laughter reflected coping mechanisms, or expressions of nervous energy. Prosecutors have asked nearly every law enforcement witness to rank their fear on a scale of 1 to 10. None of them has rated it below a 5, and one officer gave it a 10.

Defense lawyers, meanwhile, highlighted portions of the video that recorded agents mocking protesters. The line of questioning reflected an attempt to prove that the government witnesses’ fear is overstated.

“There’s no gun there … He’s just holding his back, he’s standing like a sissy,” one agent said of a protester as authorities assessed the scene about 80 miles northeast of Las Vegas.

As one woman in the crowd screamed angrily, two law enforcement officers chuckled.

“She must not be married,” one said.

The videos captured protesters yelling things like, “Get the hell out of here.” Throughout the footage, a BLM agent makes the same statement repeatedly over a megaphone: “This area is closed for the enforcement of a United States District Court order. Please leave the area.”

United States Park Police Officer Brandon Novotny testified Thursday that law enforcement officials attended a briefing the day before the standoff. He said officials were alerted to numerous people on “domestic terrorist watch lists in and among the protesters at the Bundy campground.”

Novotny was photographed in a military-style “stacking formation” with other federal agents, armed and wearing SWAT gear.

“I took a moment to think about my family,” he said, his voice cracking. “I made my peace with God … I expected to die that day.”

The six men standing trial are charged as “gunmen,” accused of conspiring with Bundy to thwart the government’s efforts to carry out a court order. Prosecutors describe them as the least culpable of the 17 people they eventually plan to try in the case.