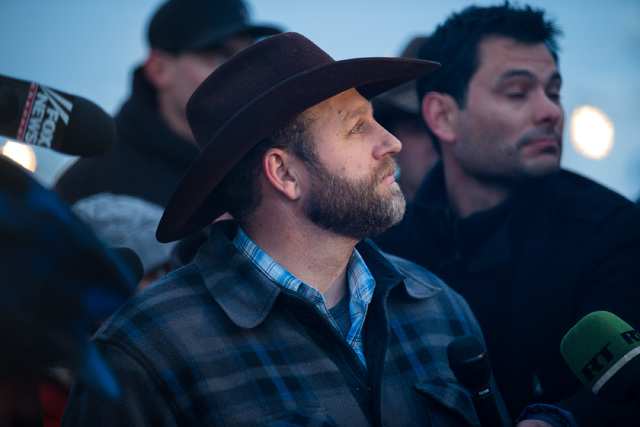 An investigation by the Nye County Sheriff’s Office has concluded that staff at the Nevada Southern Detention Center in Pahrump did not commit any criminal violations when they disciplined incarcerated rancher Ammon Bundy, who is accused of organizing an assault on federal agents.

The sheriff’s office opened its investigation May 5 following claims — from the Bundy family and other individual rights advocates — that Ammon Bundy was abused and tortured at the private detention facility. Bundy, along with his father and several of his brothers, is incarcerated pending trial on charges resulting from the 2014 armed standoff near his family ranch in Bunkerville.

Protesters who support the Bundys and the individual rights movement they espouse have been demonstrating outside the jail for days, after an early-May incident that reportedly resulted in corrections officers chaining Ammon Bundy to a shower stall after he refused to heed their orders.

“A thorough investigation by the Nye County Sheriff’s Office at the privately operated facility found that the actions taken by the Detention Center staff did not rise to the level of a criminal violation under Nevada Revised Statutes,” the office said Monday in an emailed statement. “Civil rights issues or reviews of Detention Center policy do not fall within the purview of the Sheriff’s Office investigators.”

Ammon Bundy’s brother, Ryan, has filed a federal lawsuit that accuses the jail of enforcing unconstitutional policies. Ryan Bundy claims to have spent weeks in solitary confinement — where he says he does not have access to basic needs — for refusing to adhere to the facility’s strip search policy.